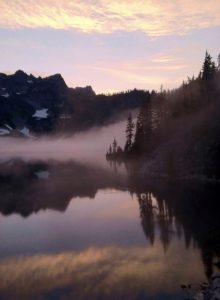 A rosy dusk descends upon Snow Lake and Mount Roosevelt.

“Through the starry hollow
Of the summer night
I would follow, follow
Hesperus the bright,
To seek beyond the western wave
His garden of delight.”

Hesperos:  in Greek mythology, son of the goddess Eos, whose chilly fingertips tinge dusk and dawn as she draws the starry curtain of night across the skies, and the god Atlas, whose sacred peak bears the axis upon which the heavens turn.  A humble, eager boy, Hesperos climbed Mount Atlas each evening with his fellow villagers to watch the stars until, on one such outing, he ran ahead of the others and was carried by a great wind into the heavens, where he became, by turns, both the Evening and Morning Star.  Given his roving appearances in both the western dusk and eastern dawn, he is also called the Wandering Star.

As the Evening Star, he is in Latin “Hesperus,” whence come the pleasant English words “evening,” “vesper,” “west,” and “supper.” In his incarnation as the Morning Star, he is “Eosphoros,” Latinized as “Lucifer.” Later monotheistic belief systems sought to depose him from his divine status by vilifying and subverting his youthful, even innocent persona to that of the fallen Angel of Light and very Prince of Darkness. Not surprisingly, this opprobrium was only wrought as a consequence of the introduction of humankind to Earth and its own subsequent loss of Paradise.

Nevertheless, in spite of all human hubris, Hesperos, the boy who climbed a mountain for the simple joy of gazing into the heavens, endures above as ever, first and last amongst all stars, a signal to those who, like him, venture forth – and even wander – in admiration of Nature and a symbol of the wide-eyed wonder inspired by a world still unspoilt.