Given their several trailheads and loop configurations, Mt. Rainier National Park’s Lakes and High Lakes trails afford a variety of hiking experiences, from shadowy woodlands to flower-clad meadows and soaring vistas, with considerable differences in round-trip distance to satisfy a range of fitness levels.  The pair anchors the southern network of trails that lace Paradise, the aptly named area of the Park at the headwaters of the Paradise River.  Although the hiking season peaks during Paradise’s spectacular mid-summer wildflower display, the trails’ many other features provide interest throughout the year, including their namesake lakes, alternating meadow and woodland waysides, unexpected panoramas, and Mt. Rainier’s peekaboo appearances throughout.  From its upper trailheads, the Lakes Trail descends to Reflection Lakes, where it merges briefly with the Wonderland Trail and flattens along the lakes’ southern shores before diverging again and climbing — sometimes rigorously — to rejoin Paradise.  It can also be hiked in the reverse direction from its lower trailheads.  The High Lakes Trail connects the western and eastern portions of the Lakes Trail north of Reflection Lakes, undulating across the short hills that ripple the mountainside between meadows and either looping around the lakes or bypassing them, depending on route.  A clutch of small lakes and ponds dots the woodland near the High Lakes Trail’s eastern junction with the Lakes Trail and just above Faraway Rock’s surprise vantage of Louise Lake far below.  In the Lakes Trail’s eastern uplands, the forest opens to huge meadows with sprawling views of Mt. Rainier and Stevens Canyon.  North of Paradise, the Skyline Trail network offers options for extending the hike even further for those who haven’t quite gotten enough of the endless alpine views.

The best way to determine which route is best for you is to consult the Park Service’s handy trail map found at one of the “Additional Trail Info” links above.  On the hike, the map will also help you choose the correct turns at some confusing trail junctions along the way.  Given the trails’ popularity and ease of access, do expect to encounter others at intervals along the way, especially along Reflection Lakes.  Bear scat is also plentiful along these trails, even just a short distance from the bustle of the Paradise Jackson Visitor Center and Paradise Inn. Always be aware of your surroundings and the fellow creatures in whose home you are the visitor.  For the well-being of all, the Park Service has posted wildlife safety tips found at another of the “Additional Trail Info” links above. 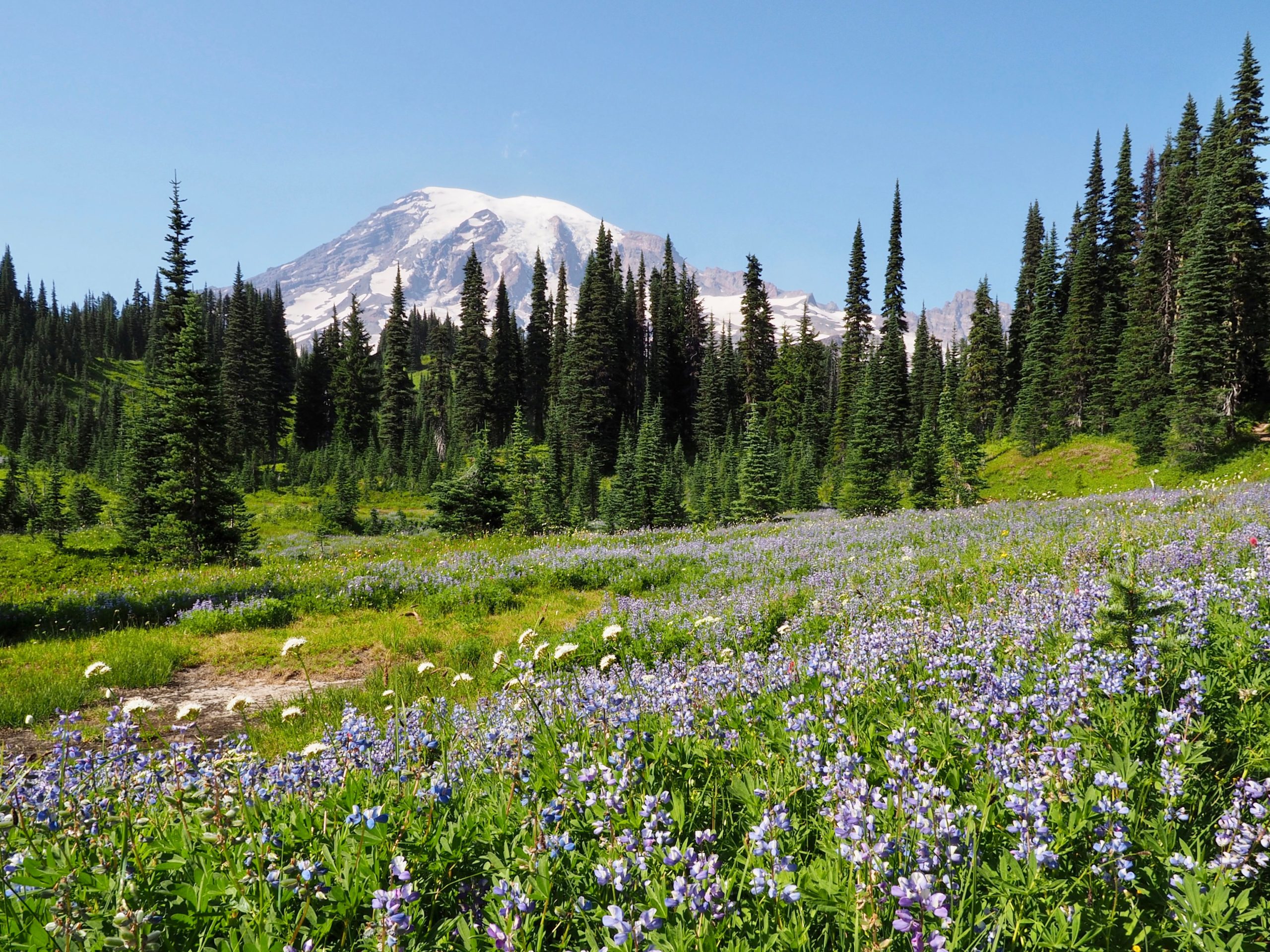 Both the Lakes and High Lakes trails generally alternate between woodland and meadowland, with Mt. Rainier’s looming summit peering frequently over the horizon. Lakes Trail, August 07, 2019. The Lakes Trail’s western section is mostly wooded. Near its midpoint, it crosses the Paradise River on a footbridge in dense forest just below an unnamed waterfall. Lakes Trail, August 08, 2019. 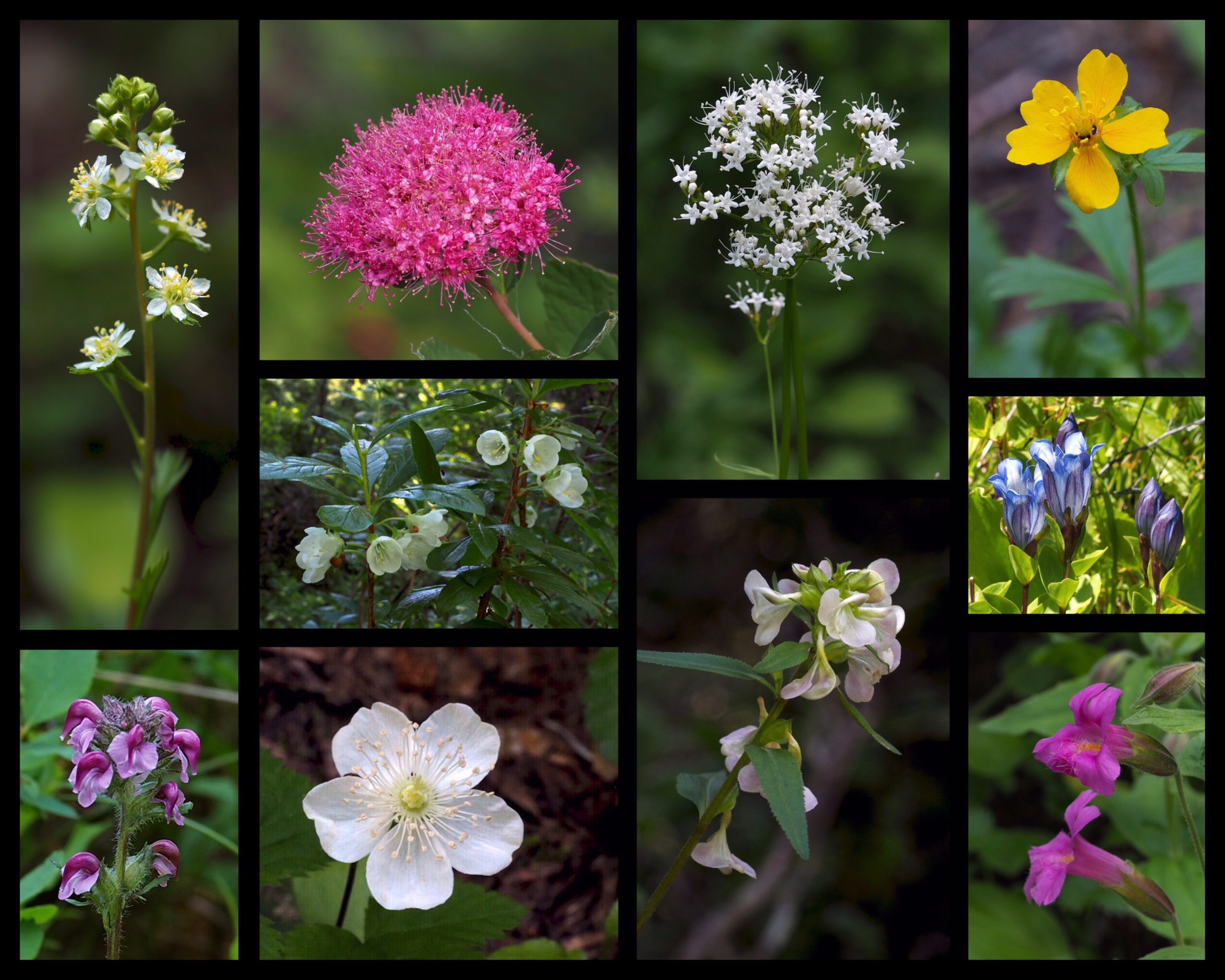 At its southernmost point, the Lakes Trail rounds the three Reflection Lakes, where it merges briefly with the Wonderland Trail before departing northward from either end. The High Lakes Trail crosses above the lakes’ opposite side, forming loops that either bypass them or encircle them, depending on the starting point. Lakes – Wonderland Trail, August 07, 2019. 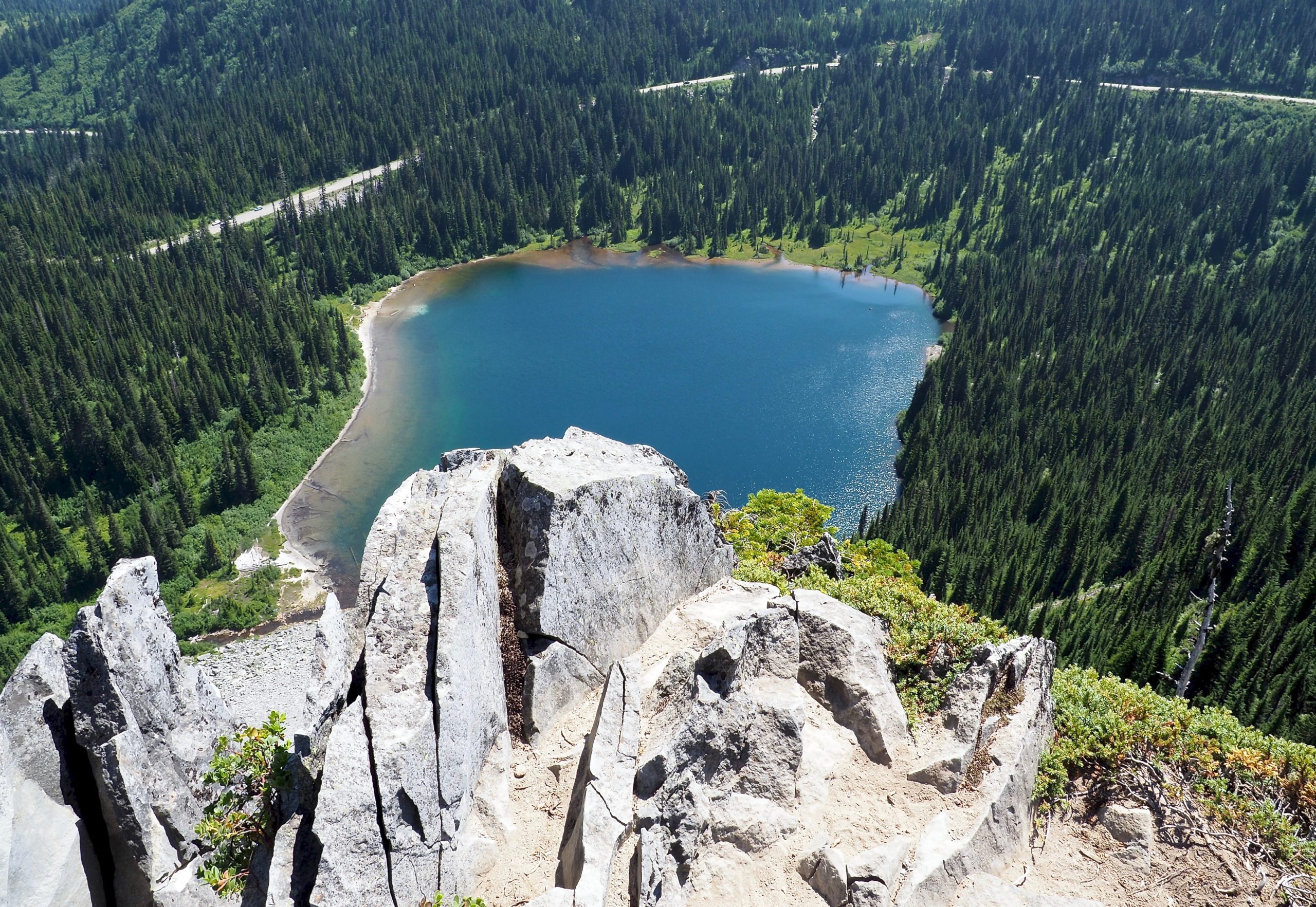 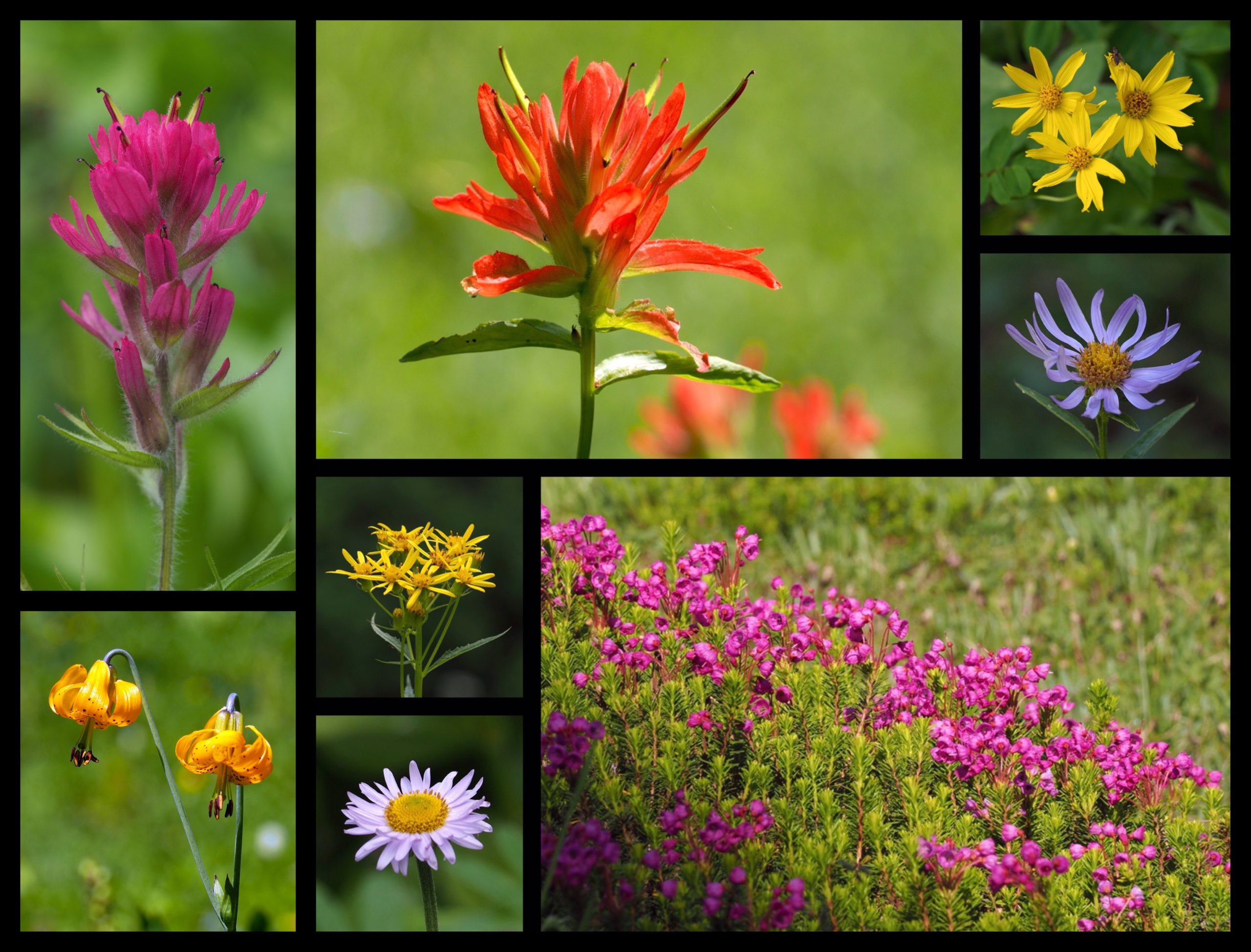 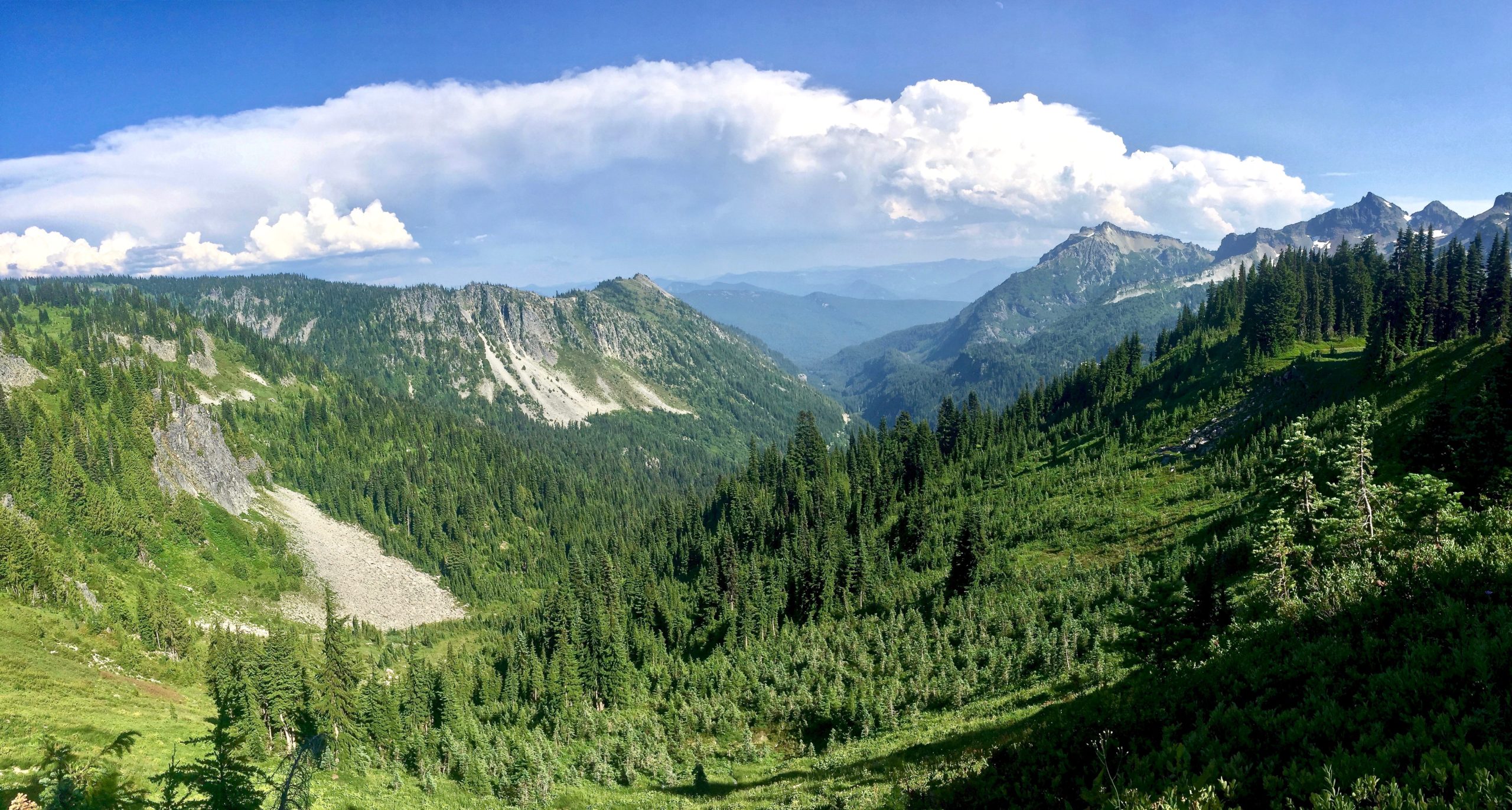 Near the Lakes Trail’s junction with the Skyline Trail, Mt. Rainier figures in full view amid a galaxy of summer wildflowers. Lakes Trail, August 07, 2019. 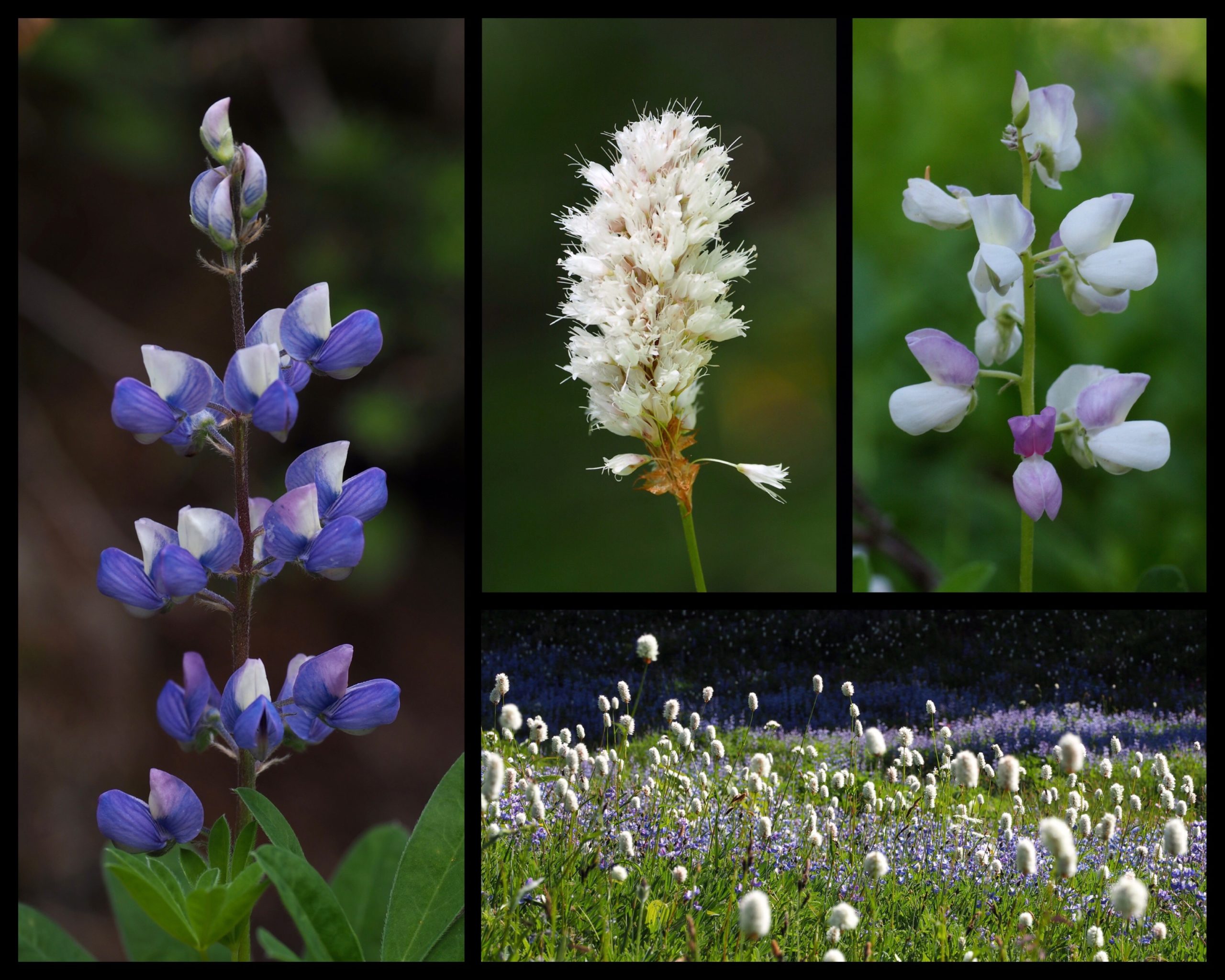 The star of Paradise’s summer wildflower show is the broadleaf lupine (Lupinus latifolius) (left), which masses in fragrant drifts throughout the meadowlands. Keep an eye out for unusual pale varieties, as in the upper right photo. Not to be outdone, American bistort (Bistorta bistortoides) (upper center) also blooms by the billions, in some places bobbing amongst the lupines, as in the lower photo, and at others in vast parallel swathes, as in the foregoing photo of Mt. Rainier.
Lakes and High Lakes Trails, August 07 and 08, 2019.