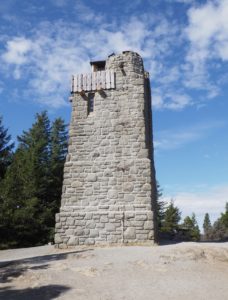 Mount Constitution is crowned by an observation tower styled after 12th-century Caucasus mountain watchtowers. The lookout and the surrounding grounds at the summit offer the quintessential island view.
Mount Constitution Trail,
September 24, 2017.

Set on Orcas Island in the middle of the Salish Sea, Washington’s first state park is a hidden jewel.  Moran State Park boasts over 5,400 acres/2,185 hectares, 38 miles/61 km of hiking trails, five lakes, several waterfalls, and one impressive peak.  The park’s network of trails and roads provides multiple routes to its many attractions, offering options for nearly all to enjoy.  This profile highlights a few of its prominent features that may be reached by several connected trails as a relatively easy day hike.  Be sure to check the park brochure and map at the “Additional Trail Info” link above for detailed trail, road, and parking information.

This profile begins at Cascade Lake in the park’s southwest corner and ends on the summit of Mount Constitution near the park’s northern boundary.  The trails meander amid massive columns of the park’s expansive old-growth forest and generally climb little — except for the final ascent to Mount Constitution.  The Cascade Creek Trail features four small waterfalls along its short distance before it joins the Mountain Lake Loop at the creek’s source on the lake’s southern end.  The loop trail hugs the lakeshore, sometimes just steps from the water’s edge, and provides glimpses of Mount Constitution rising beyond.  Consider taking one side of the loop on the way out and the other on the return trip.  On the north end of Mountain Lake, the Twin Lakes Trail branches to a pair of quiet lakes nestled amongst ancient woodland at the foot of Mount Constitution.  From there, the steeply pitched Mount Constitution Trail switchbacks up to the peak’s summit, where a panoramic vista rewards the perseverant.

While Moran State Park is a popular destination for tourists visiting the San Juan Islands, its size and variety of recreational options create space to enjoy its many features without feeling crowded.  Do expect concentrations of others at the summit of Mount Constitution and around campgrounds, boat launches, and picnic shelters, but otherwise enjoy your hike in relative peace.  Off-season visits in spring and autumn offer the same beauty with even more tranquility. True to its name, Cascade Creek tumbles over four picturesque falls within a short distance of its origin at Mountain Lake. Cascade Falls (upper left) is the largest, with view points on two short side trails. A toppled titan rests atop tiny Rustic Falls (upper right), which is visible from the main trail. A short boot path leads down to secluded Cavern Falls (lower left). Hidden Falls (lower right) remains out of sight directly below a footbridge on the trail, but may be viewed by scrambling below the bridge. The falls are relatively small, but offer photographers several opportunities to hone their craft with long-exposure photography that enhances the falling waters’ forms.
Cascade Creek Trail, September 25, 2017 and April 08, 2019. In contrast with the vast expanse of Mountain Lake, the Twin Lakes are tucked away in a more intimate setting. Here, Big Twin Lake, the larger of the two, reflects its tranquil surroundings. Boot paths circling both offer opportunity for further exploration. Twin Lakes Trail, September 24, 2017. 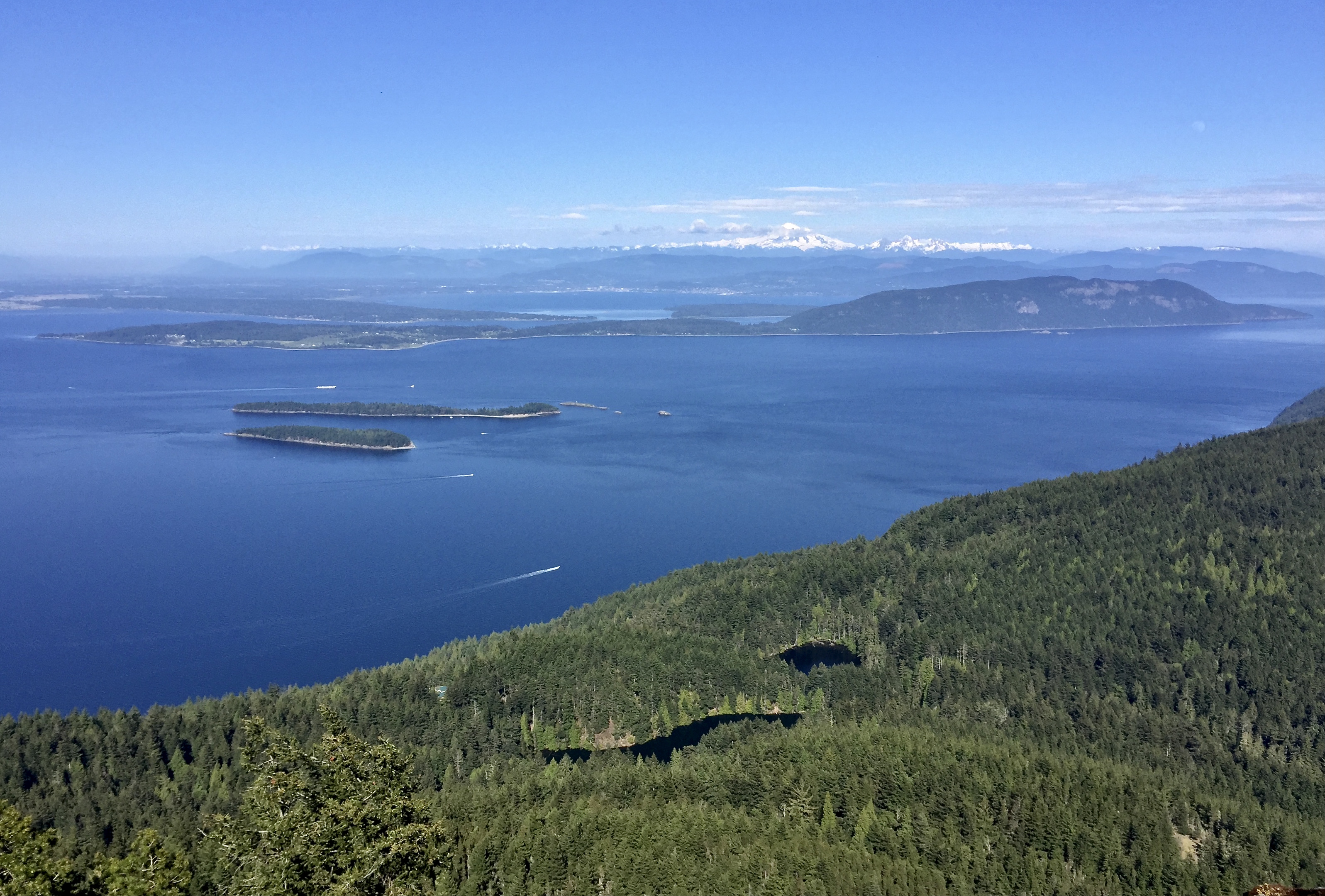 From the Twin Lakes, the Mount Constitution Trail climbs steeply up — and up! — to its islandtop vantage. See how tiny the lakes look below! Not to worry — a road to the summit affords an alternate route to those less inclined to undertake the arduous ascent by foot. The soaring vista sweeps from Washington into British Columbia. In this partial view, it surveys the Salish Sea; Barnes, Clark, and Lummi islands; Bellingham, Washington; and Mt. Baker. Mount Constitution Trail, May 22, 2021.