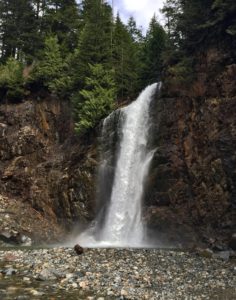 Twin trails lead to Franklin Falls, one tracking the emerald-tinted South Fork Snoqualmie River around the feet of massive old-growth evergreens along a narrow, stony gorge and the other the remnant of an old wagon trail, joining just before they reach a rock-rimmed basin where the river pours itself over one hundred feet/thirty meters into a broad pool at the hiker’s feet.

A braided network of trails and roads — both historic and modern — provides access to the falls.  The main road leading to the trailheads is Road 58, sometimes called Denny Creek Road, which is a remnant of the old Sunset Highway that crossed Snoqualmie Pass before construction of the Interstate 90 freeway.  The main trailhead lies just before the bridge on a side road (Road 5830) that leads further to the trailhead for Melakwa Lakes, although other trail entrances with limited parking can be found farther up Road 58.  The separate Snoqualmie Pass Wagon Road Trail, which follows a short segment of the wagon road that predated the Sunset Highway, begins at the juncture of Road 58 and Road 5830 and crisscrosses the winding Road 58 twice before merging with the main trail just before it reaches the falls.  The main trail and wagon road trail may be hiked separately or as a loop, for a round-trip of approximately 2.00 miles/3.20 km by any route.  Farther up Road 58, a separate, unmarked boot path leads a few hundred feet/120 meters to the upper falls unseen from the main trail.

Road 58/Denny Creek Road is often closed partially or entirely during winter’s snows, although parking is permitted along the road leading to the barricades.  Hiking the nearly flat, forest-lined road to the trailhead adds an approximate 5.00 miles/8.00 km to the round-trip distance.

Given the trails’ attractive features and ease of access throughout the seasons, one should expect company.  Those wishing a bit more solitude may wish to visit the falls early in the day or on a weekday.  Do exercise caution along the river gorge, which occasionally drops precipitously just steps from the trail.  The boot path above the falls poses significant risk and should only be attempted by the most sure-footed hikers. The main trail traces the South Fork Snoqualmie River, at this point merely a large creek, through heavy coniferous forest. As it climbs, the main trail affords frequent glimpses of the river chasing itself down rapids and small falls in the rocky gorge below. Although the trail is recommended for even small hikers, care should be exercised near ledges to prevent falls. Franklin Falls Trail, September 17, 2017. The Snoqualmie Pass Wagon Road, constructed in 1867, was the first road across the pass, following routes used by Native Americans to traverse the mountains.  The trail climbs moderately through dense second-growth forest, clearly sprung up since the wagon road was decommissioned in favor of the 1915 Sunset Highway, of which Road 58 is a remnant.  Because the Sunset Highway generally followed the same path as the wagon road, the wagon road trail crisscrosses Road 58 and never strays far from the whir of cars speeding to trailheads or on to the road’s current terminus at Snoqualmie Pass. 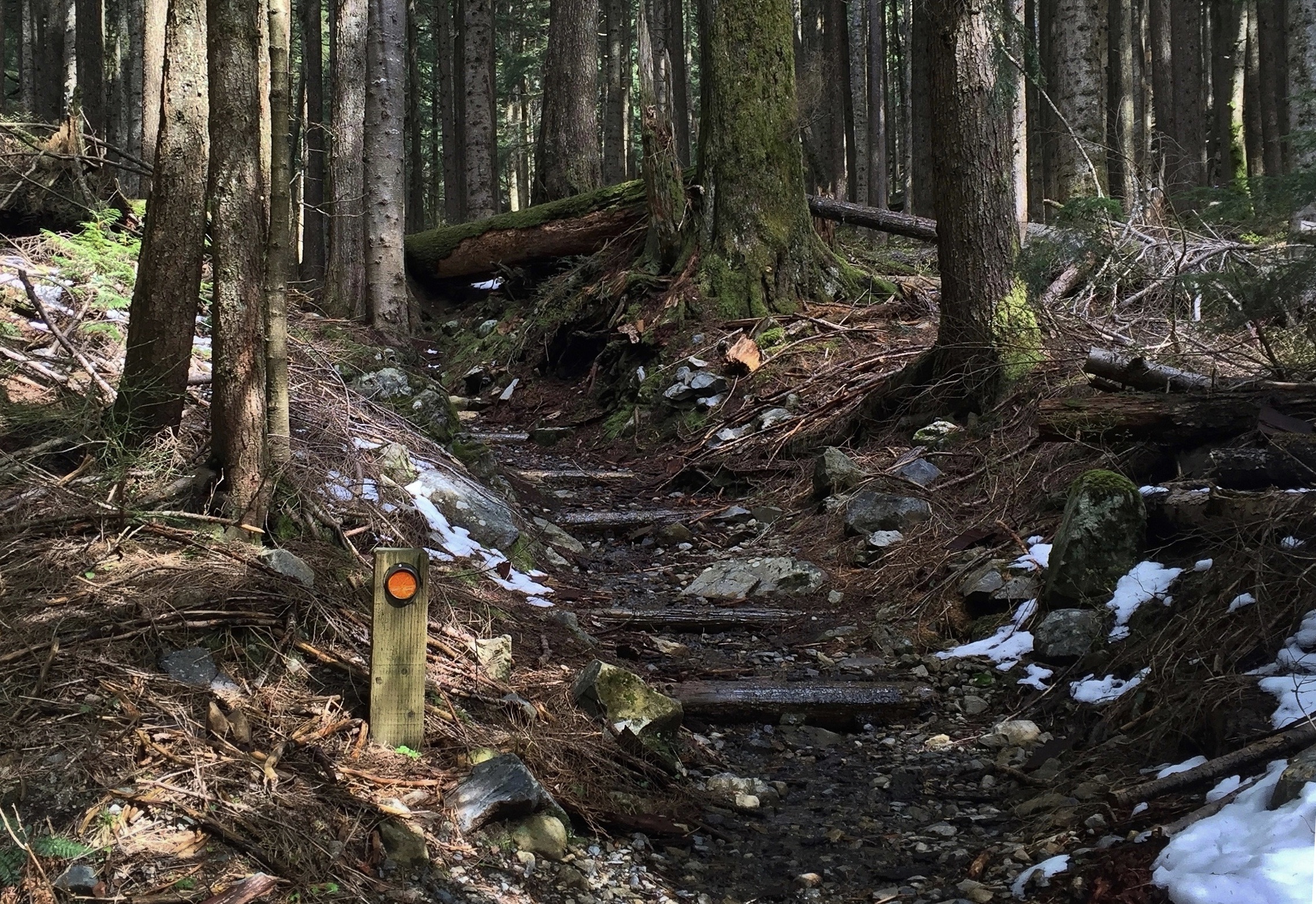 The wagon road trail is sometimes poorly marked, especially where it crosses Road 58 and where there is little understory growth to differentiate it from the surrounding bare earth. Look for reflective markers and log-lined trail improvements to guide the way.
Snoqualmie Pass Wagon Road Trail, April 05, 2015. 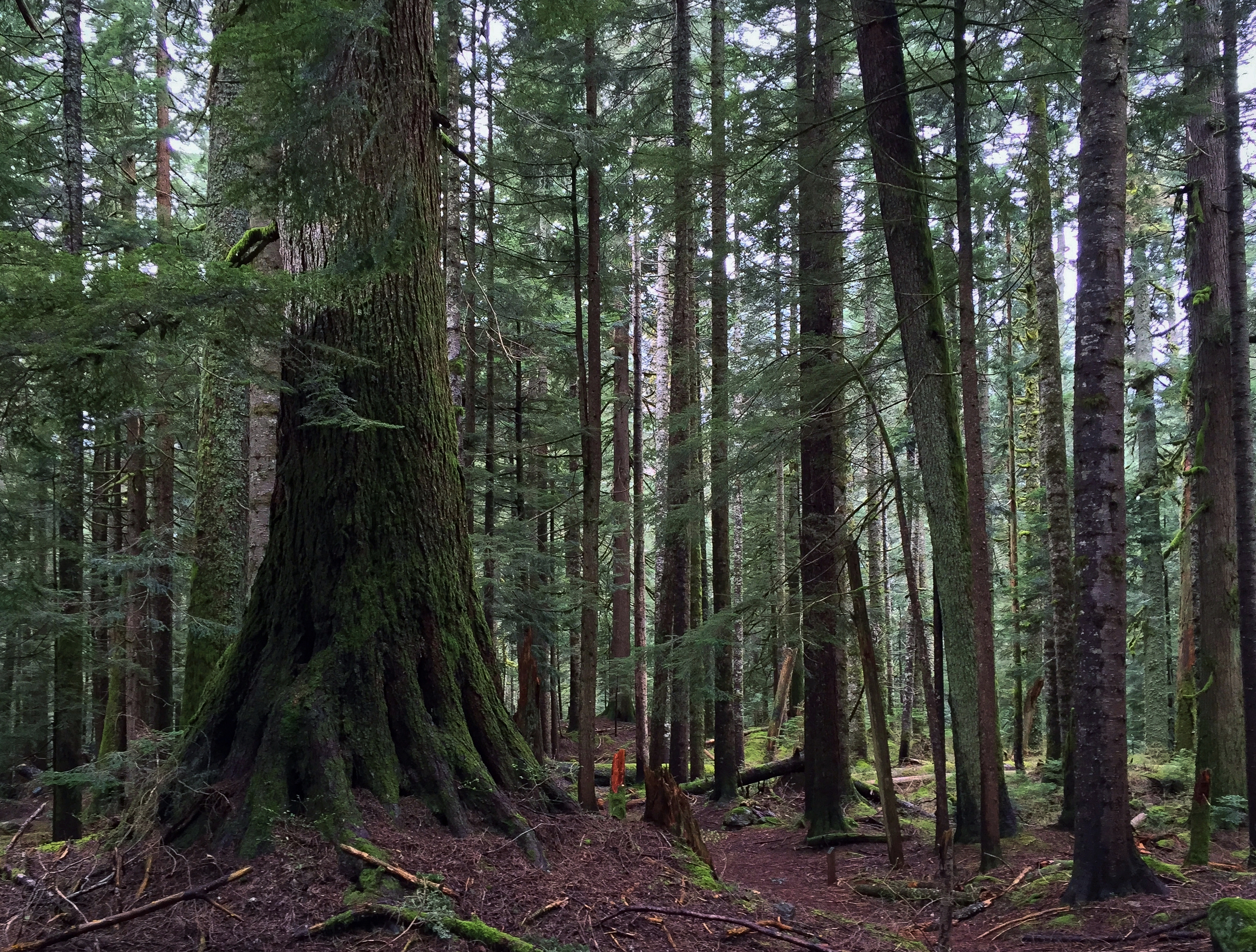 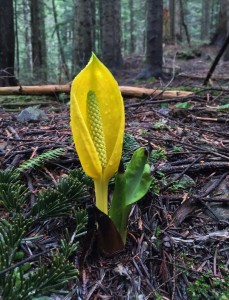 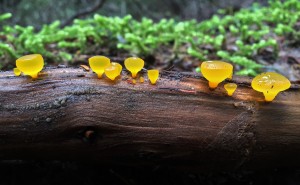 At Franklin Falls, the South Fork Snoqualmie River pours 109 feet/33.20 meters over the ledge of a stony cul-de-sac into a shallow, gravel-bottomed pool beneath. The falls’ volume varies significantly with local precipitation and snowmelt. Franklin Falls Trail, July 04, 2018. An unfortunately placed freeway viaduct soars just above the falls’ splash pool, although its sound is largely muffled by the roar of rushing waters. The elevated structure permits winter avalanches to pass freely underneath without burying or damaging the freeway. Franklin Falls Trail, March 08, 2015. In winter, Franklin Falls’ surrounding cliffside is hung with a fantastic array of icicles formed by spray drifting from the waterfall. Although the trail’s relative ease of access renders it a popular winter hike, traction footwear and gear are essential, as the trail’s final descent is as treacherously glazed as the falls’ wintry backdrop. Franklin Falls Trail, December 08, 2016. 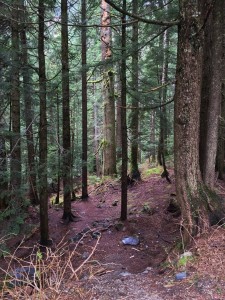 The river’s airborne descent into the pool at the trail’s end is actually only its final — albeit most dramatic — plunge in a series of falls, chutes, and pools that begins out of sight beyond the precipice above.  A separate, unmarked boot path leads a short distance to the upper falls, branching in both directions up and down the river.  It begins north of Road 58’s four hairpin curves on a straight stretch that parallels Interstate 90. On the left, look for a small pullout with room for about two cars. Because it drops downhill from the road, the path is only visible after parking and peering over the edge of the pull-out.

Safety Note:  The boot path to the upper falls is not for children or the unsteady — one slip into the churning rapids and the unfortunate hiker will quickly find him- or herself jettisoned over the top of falls.