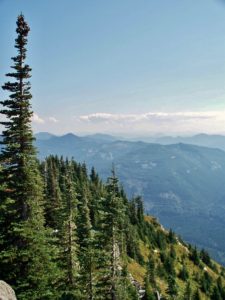 Bandera Mountain’s strenuous ascent rewards fortitude with panoramic views of the South Fork Snoqualmie River Valley, peaks surrounding on all compass points, and, during the brief early summer wildflower season, a kaleidoscopic tapestry of blooms.  The trail’s incline increases dramatically as soon as it branches northward from the Ira Spring Trail and, with more boulders than soil and nary a switchback, is not for the weak of knee or ankle.  Trekking poles may be helpful.  A fire in 1958 left much of the mountaintop nearly bald, from which it has yet to recover, but which affords increasingly grand views as the trail climbs.

This profile begins where the side trail to Bandera Mountain’s summit turns sharply upward from the Ira Spring Trail, which continues across its lower flank to Mason Lake, Mount Defiance, and other destinations by connecting trails.  The Ira Spring Trail is heavily used; however, except during peak wildflower season, few hikers venture up Bandera Mountain’s ramparts, where a bit of ridgetop solitude may be found amongst its jumbled stones.  Although the distant whir of Interstate 90 occasionally wafts from the valley floor below, it is hushed by the mountainside’s windswept vastness. Views skim the mountaintops in all directions from the treeless slopes about the trail. In early summer, common beargrass (Xerophyllum tenax) blankets the meadow in a stunning mantle of nearly waist-high plumes. Bandera Mountain Trail, July 09, 2014. 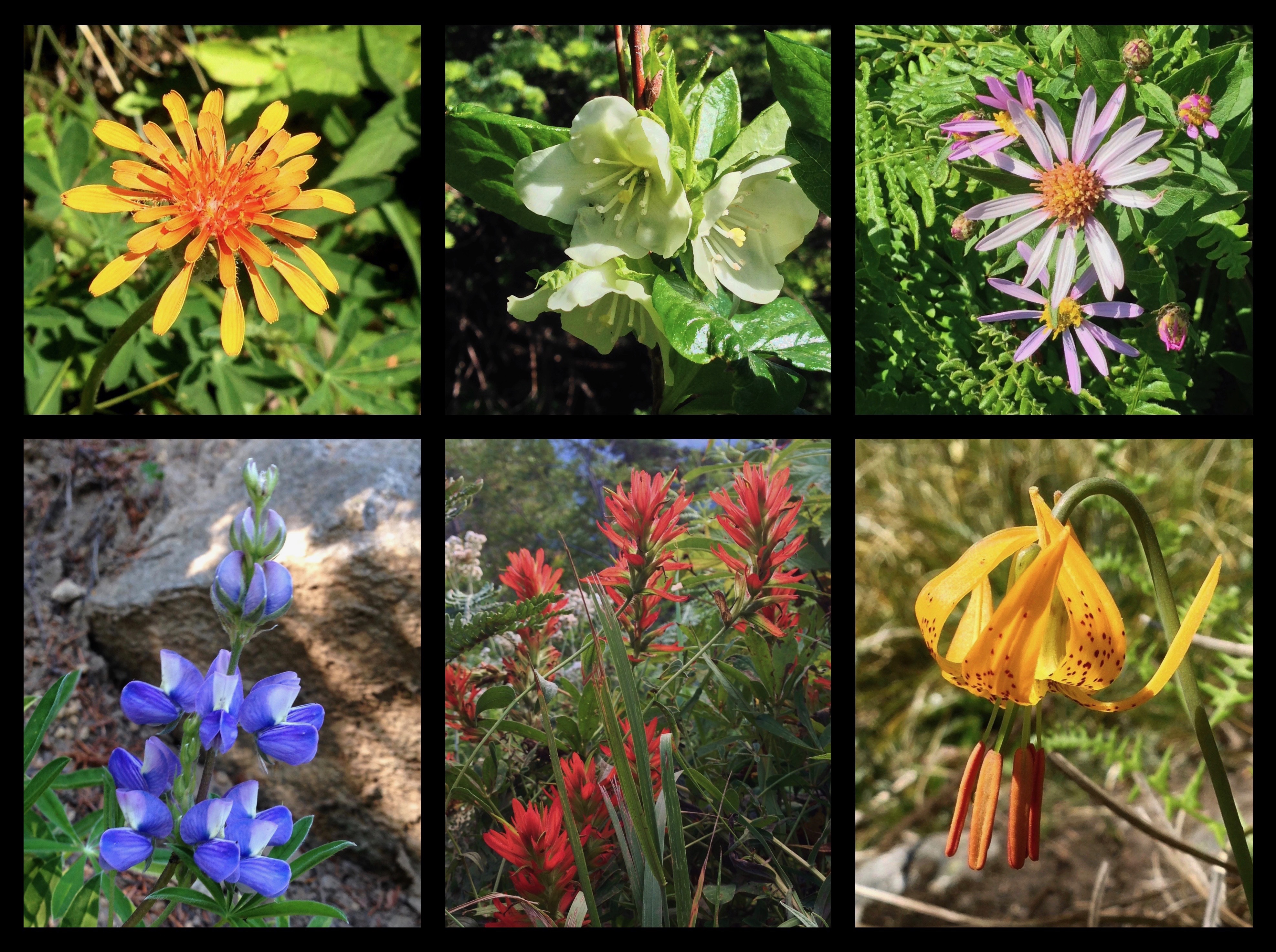 Bandera Mountain is also home to various species of penstemon, which flourish among its stones. Known for their appearance as gaping, disembodied lips and throats, some penstemon are also imaginatively called “beardtongues” because of the fuzz inside their flowers’ yawning gorges. Across the top and in the lower left, variously hued blooms of Davidson’s beardtongues (Penstemon davidsonii) jut from their ridgetop, rockside holds. In the lower center, littleflower, or, pincushion penstemons (Penstemon procerus) loft tiny, pom-pom bloom clusters. As its name implies, the woodland beardtongue (Nothochelone nemorosa), lower right, inhabits open forests as well as mountain meadows and can be found throughout the trailside.
Bandera Mountain Trail, July 05 and 09, 2014.

Beyond the meadow, the trail picks its way along Bandera Mountain’s boulder-strewn ridgeline, where the view plunges seemingly headlong to the valley floor below. Bandera Mountain Trail, July 09, 2014. 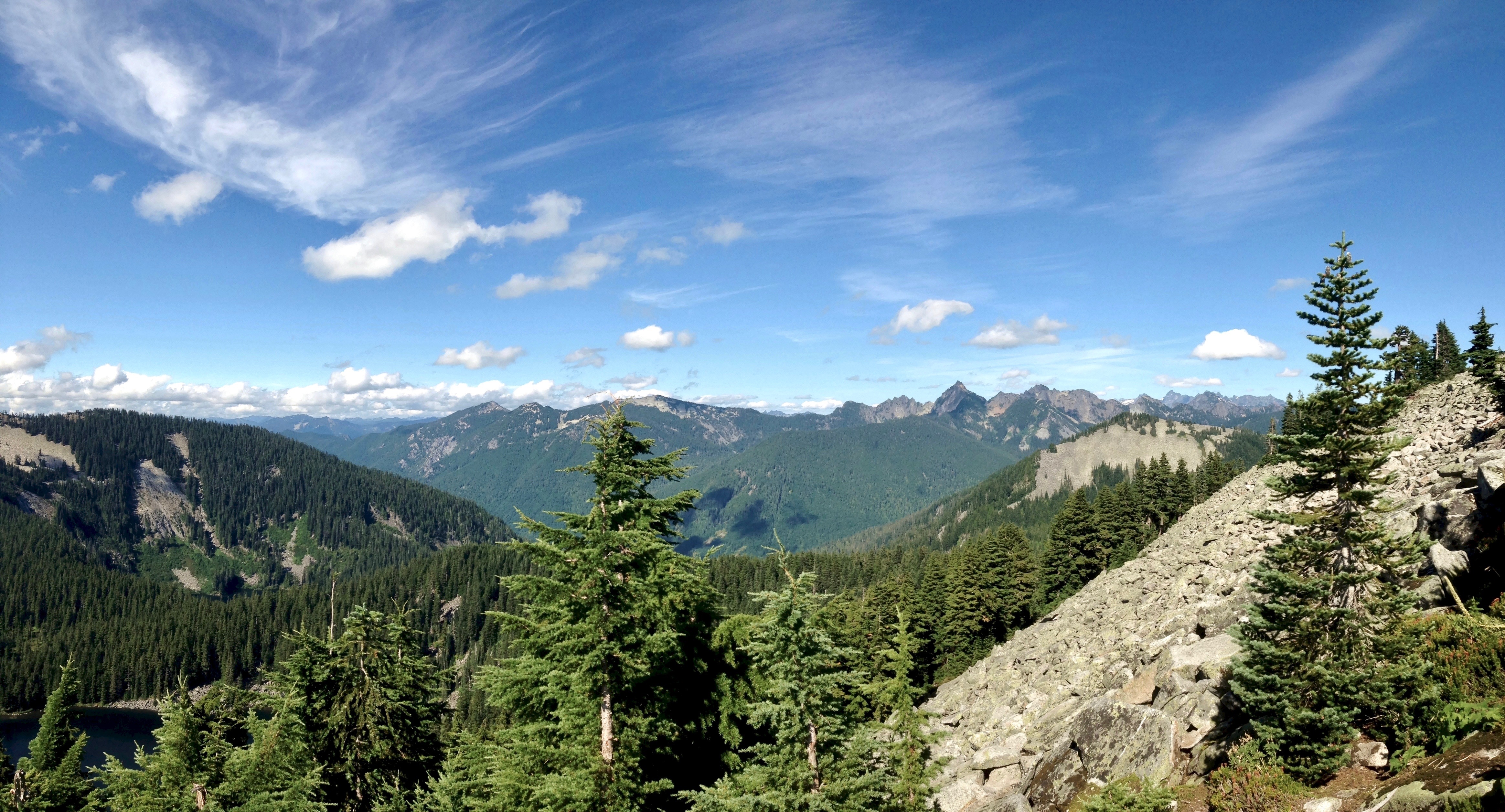 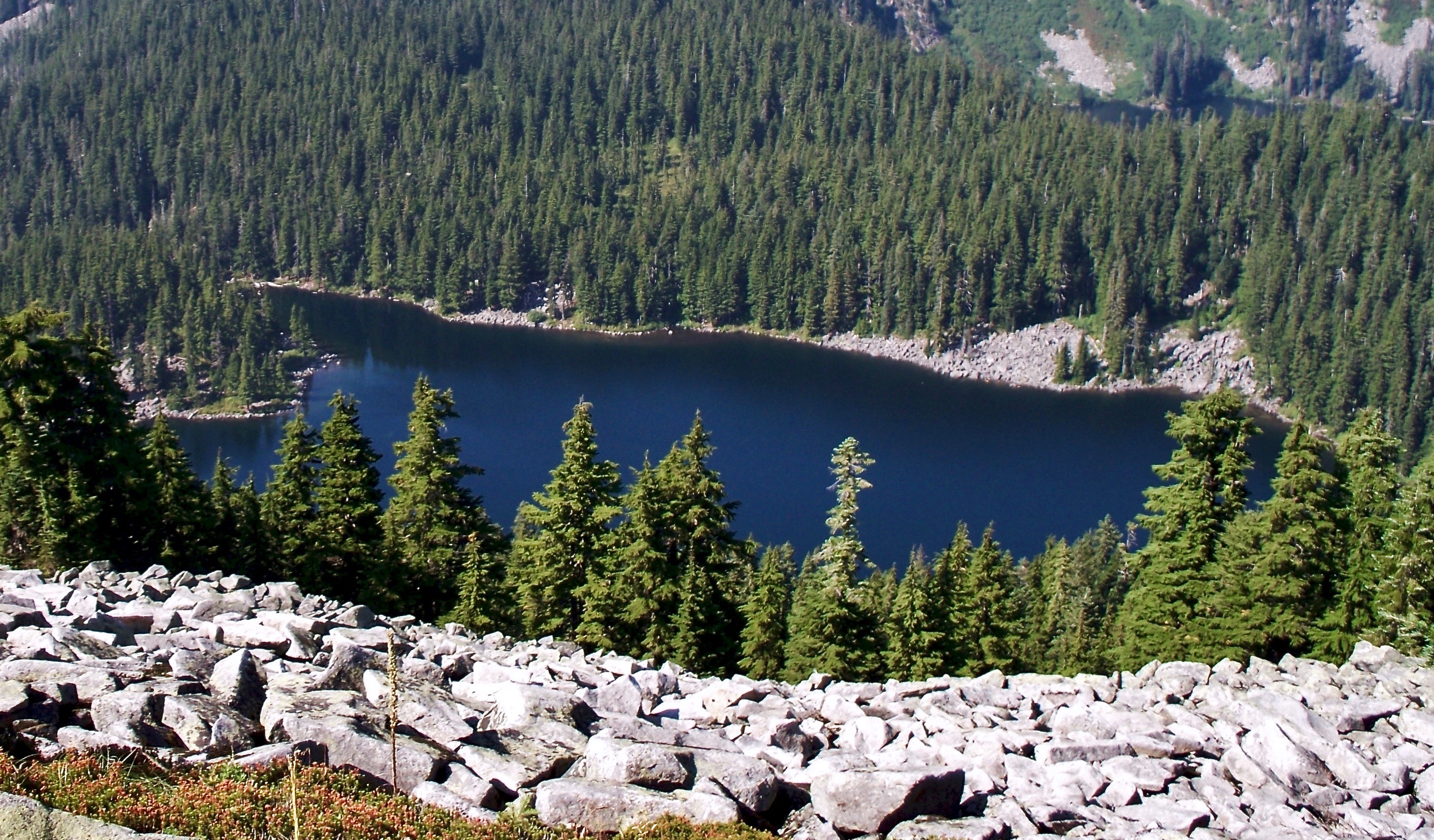 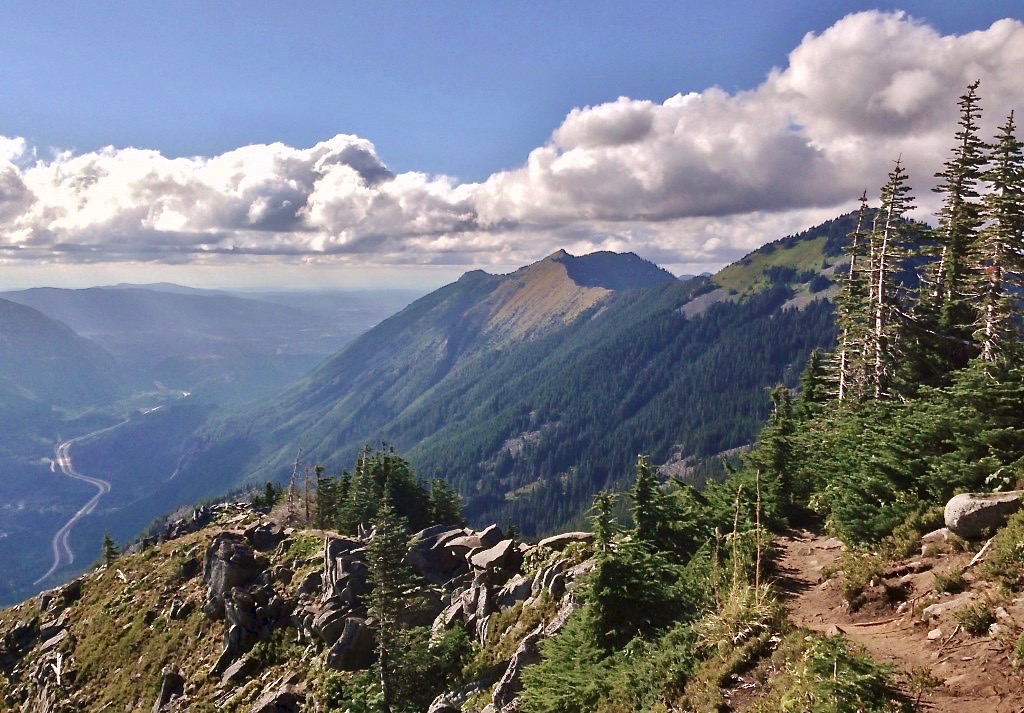 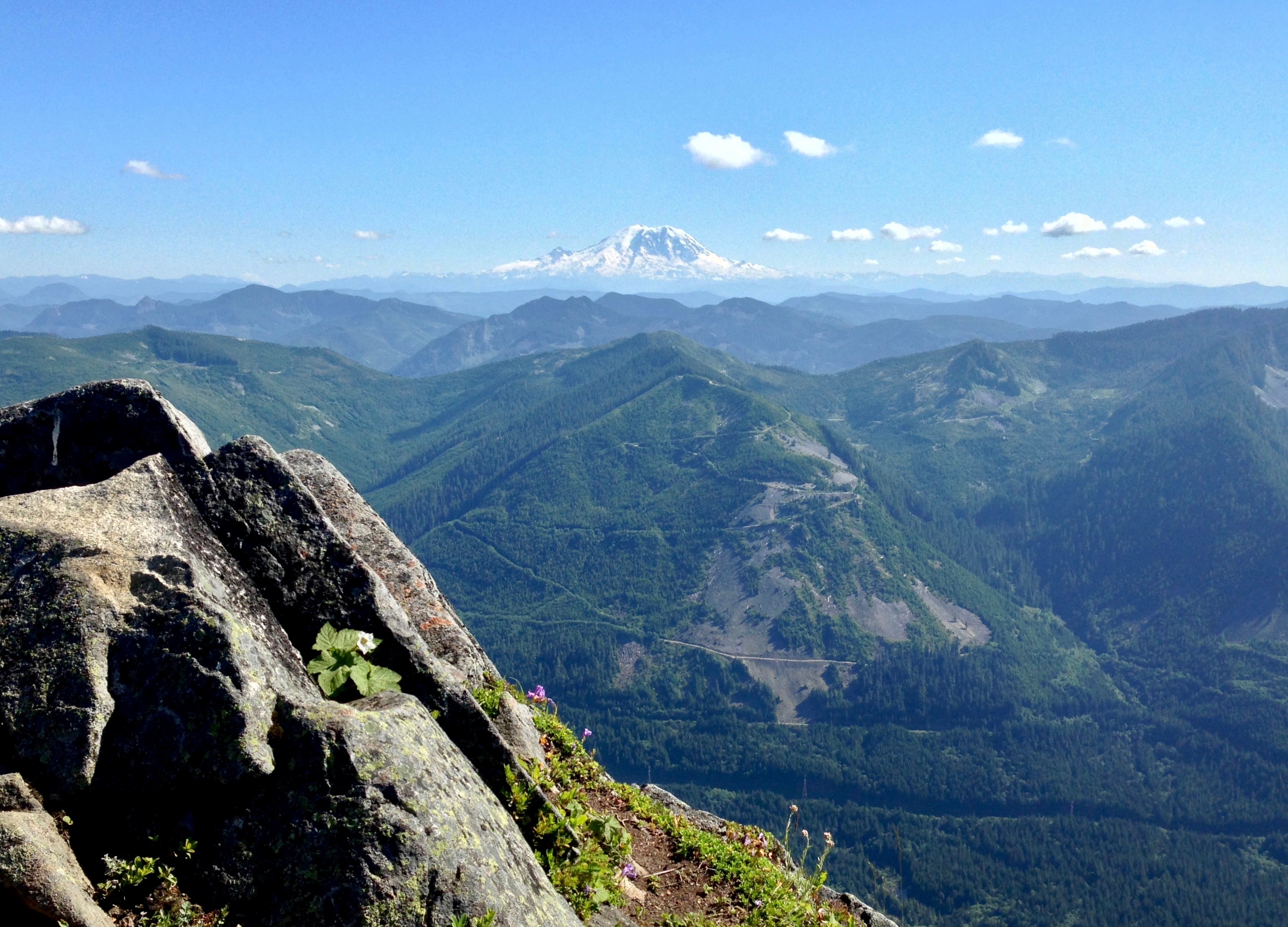