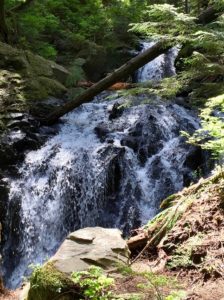 The trail generally zigzags along Twentytwo Creek, which tumbles down a series of falls officially known as Twentytwo Creek Falls, although several individual plunges have unofficial designations. Boot paths lead to views of several of the falls, but care should be exercised when exploring off the main trail, as the side trails are rugged and often end at ledges obscured by foliage. Lake Twentytwo Trail, May 09, 2015.

Unlike much of the surrounding wilderness, Lake Twentytwo and the virgin forest that cloaks its watershed remain untouched by logging or fire and have been protected as a research natural area since 1947.  The trail up to and around the lake climbs moderately through subtly varying ecological layers, ranging from plush mosses to stony barrens and accented throughout by massive conifer columns.  Water is a consistent feature.  Rivulets frequently cross the trail, often co-opting it for short distances before slipping elsewhere out of sight.  Glimpses of the South Fork Stillaguamish River appear through the forest fringe before the trail turns upward, never meandering far from Twentytwo Creek’s many boisterous waterfalls, collectively known as Twentytwo Creek Falls.  At the foot of Mount Pilchuck‘s sheer northern face, the trail loops around the lakeshore, continuing through distinctly varying habitats including bogland, boulderfields, and subalpine forest.

Lake Twentytwo’s unusual name is thought to have derived from numeric designations on early surveyor’s maps before English names had been assigned to the local water bodies, with this particular lake and creek never receiving any other moniker.  The lake’s now official designation flouts standard English punctuation, with several other iterations also in common use, including Lake Twenty-two, Lake Twenty Two, and Lake 22.  The names for its creek and falls follow suit.

Although wet and rocky in places, the trail is heavily used.  Be prepared with appropriate footwear and, especially on weekends, expect the company of fellow hikers. The stars of the old-growth forest along the trail are its venerable western redcedars (Thuja plicata), some reaching upwards of twelve feet/3.70 meters in diameter. As the trail climbs, parted forest reveals glimpses of far-off peaks, including Liberty Mountain as seen here. Lake Twentytwo Trail, May 03, 2015. Be prepared for dampened footwear: oblivious to human intrusion onto their ancient paths, streams patter across the trail at will, especially in spring when runoff peaks. Lake Twentytwo Trail, May 03, 2015. 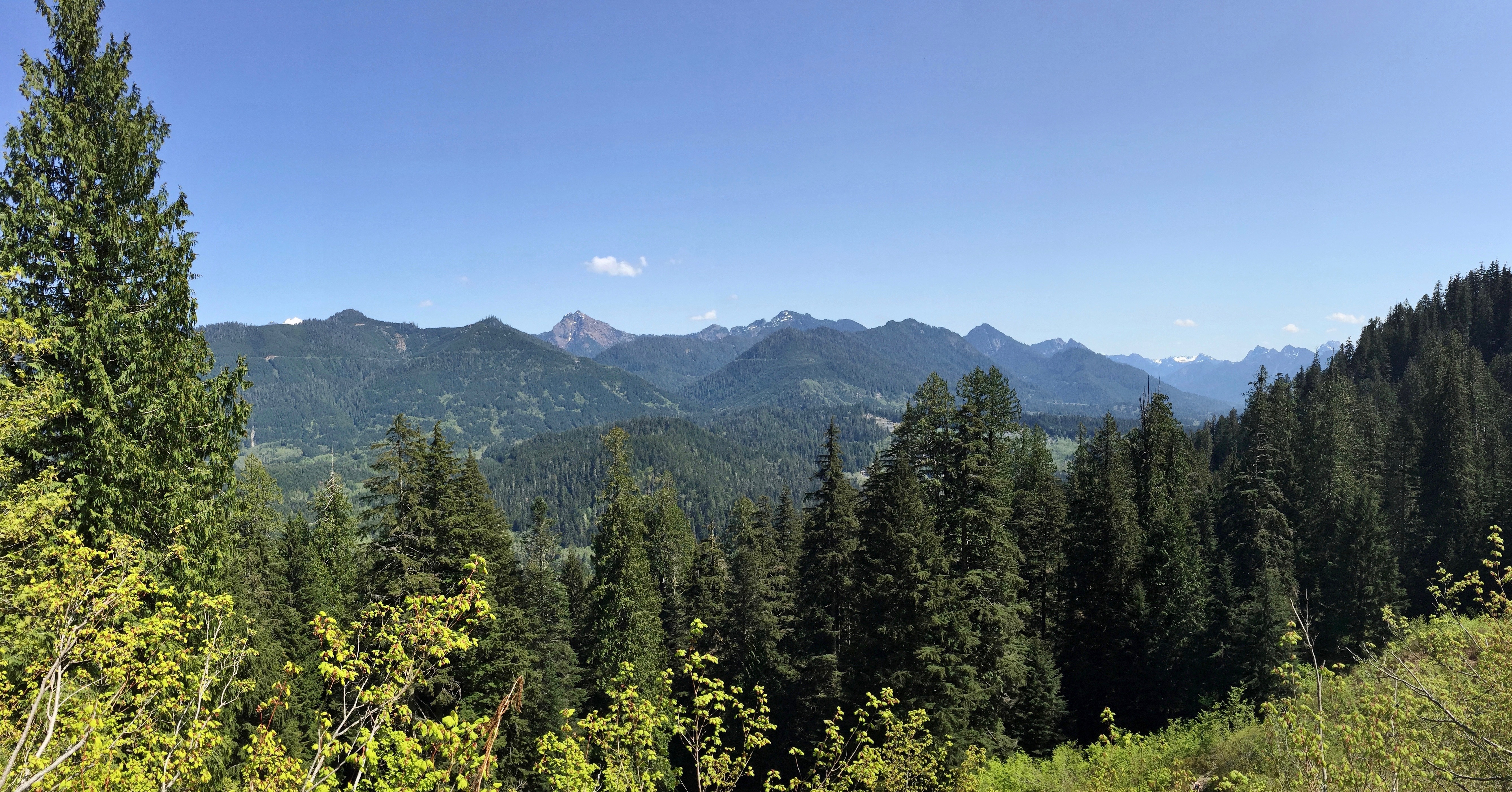 An open talus slope, too rocky to support large trees, interrupts the forest mid-way up the trail, affording northeasterly views of the Cascades, most prominently Liberty Mountain (here, the treeless peak beneath a tiny cloud). Lake Twentytwo Trail, May 03, 2015.

A variety of wildflowers dots the trailside throughout. In the top left, a salmonberry (Rubus spectabilis) blossom gazes out beside a newborn berry. On the right, a Pacific bleeding heart (Dicentra formosa) lofts its dangling, namesake charms. In the center left, a violet (likely a pioneer, smooth yellow, or stream violet, Viola glabella), fond of moist shade, squints into sunlight on the forest’s verge. Uncommon on the west side of the Cascades, anemones in the center right (likely western wood, or, Lyall’s anemones, Anemone lyallii) nevertheless make an appearance along the open talus slope. Pacific trilliums (Trillium ovatum), bottom left, bear a resemblance to their domestic garden lily cousins. In the bottom center, a plumed Solomon’s seal (Maianthemum racemosum) nods from out the trailside shadows. Lake Twentytwo Trail, May 03 and 09, 2015. 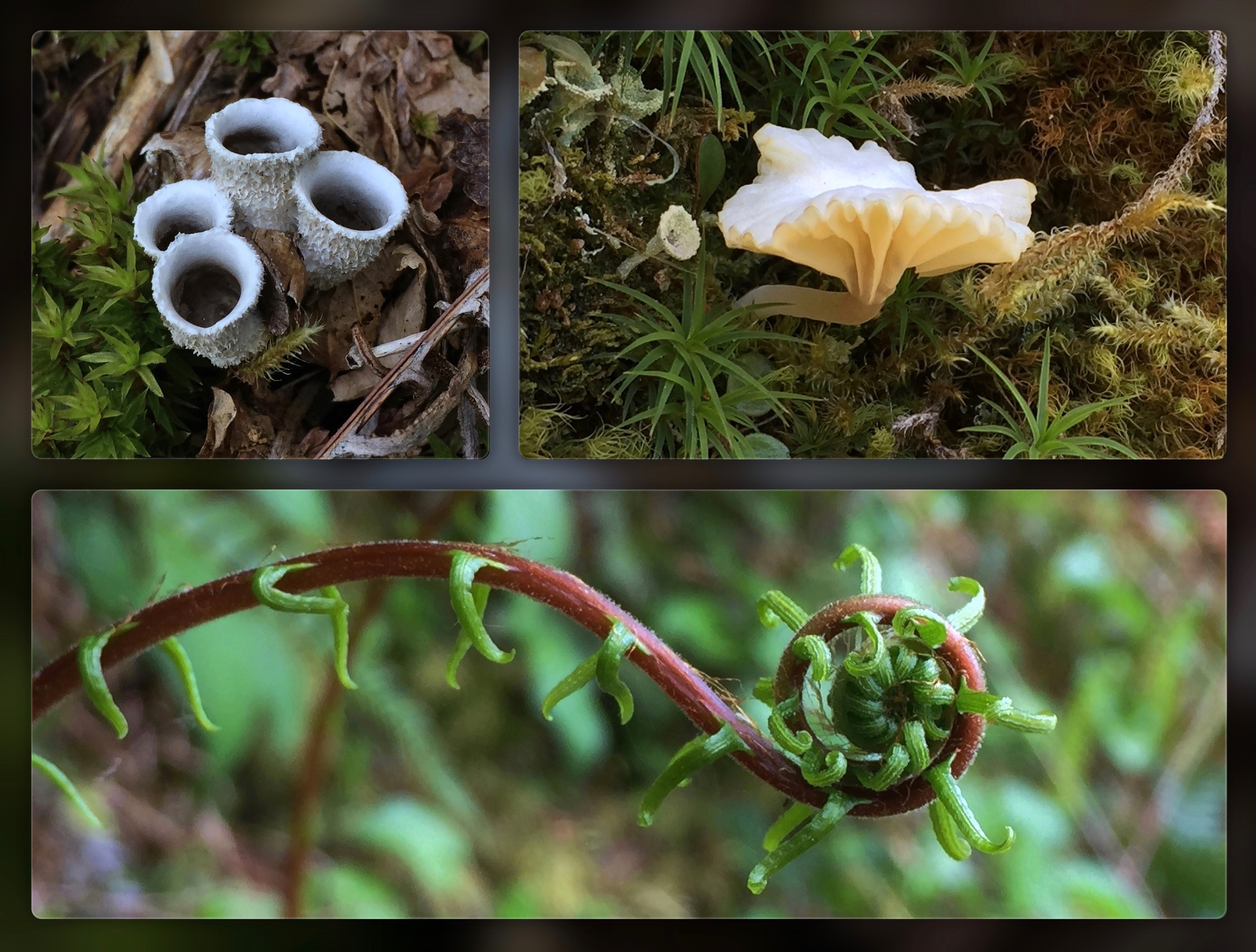 A watchful eye to the wayside rewards with glimpses of Lilliputian curiosities. The pallid cups on the top left are bird’s nest fungi (Nidulariaceae) and would once have held clutches of spore-bearing “eggs” that were dispersed by raindrops. On the top right, a stumpside mushroom unfurls its luminous cap amid a bed of mosses and lichens reminiscent of an undersea garden. On the bottom, the dragon-like fiddlehead of a deer fern (Blechnum spicant) slowly spirals forth into a frond. Lake Twentytwo Trail, May 09, 2015.

Just before the trail reaches the lake, a short boot path leads to where Twentytwo Creek cascades in strands down a rocky staircase unofficially known as “Apron Falls” for its fanning sprawl.  Lake Twentytwo Trail, May 03, 2015.

Lake Twentytwo pools at the foot of Mount Pilchuck‘s great northern wall, beyond which the mountain’s summit sweeps upward far beyond sight. Lake Twentytwo Trail, May 09, 2015. A substantial trestle bridge bears the trail across Lake Twentytwo’s outlet to Twentytwo Creek and delivers it to a boardwalk that rounds the lake’s boggy eastern edge. May 03, 2015. In spring, the clear, stony voices of rills and waterfalls coursing down Mount Pilchuck‘s rugged face ring across the lake before they disappear into the scree that skirts its feet. Lake Twentytwo, May 03, 2015. Three Fingers’ snow-clad peak peers above the horizon’s cleft at the lake’s outlet to Twentytwo Creek. Lake Twentytwo, May 03, 2015. In the upland bogs near the lake, look for white marsh marigolds (Caltha leptosepala) and the exotic-looking, yet foul-smelling skunk cabbage or, swamp lantern (Lysichiton americanus). Lake Twentytwo Trail, May 03, 2015.