Although the site of much human activity in the early to mid-1900s, including logging, mining, and a slash fire escaped from the valley below, Mount Muller continues the gradual recovery of its woody, many-layered mantle.  The mountain’s 13.00-mile/21.00-km loop trail arcs through varying habitats, from the lush, leafy woodland at its feet, the fine weft of slender, maple-laced conifers stretching up its flanks, to the blooming meadows, stunted forests, and distinctive stone outcrops strung along the cloud-swept peaks of its coxcomb ridge before descending again through similar strata to the trailhead where it began.  Whether hiked clockwise or counterclockwise, the trail climbs steeply up one end of the mountain and, even after attaining the ridge, repeatedly loses and regains elevation along its undulating crest before dropping as sharply down the other end.  Throughout, posted signs confer whimsical monikers on various points, e.g., Miners Crossing, Nosebag Point, Crow Caw Flats, etc.  When the clouds that frequently gather on the mountaintop permit, its ridgeline meadows afford views down the Sol Duc River Valley below and on to snowy Mount Olympus and even Mt. Baker to the extreme northeast.  This profile follows the loop trail clockwise, as suggested by signage at the trailhead.

Although encounters with others on the trail are infrequent, it is a multi-use trail open to hikers, mountain bikers, and equestrians alike.  Around the trail’s many bends and hillocks, bikers may be heard before seen; if curiously swift voices approach from beyond sight, be sure to move aside so that all users can coexist without mishap. Littleton Creek murmurs softly through the leafy lowland forest near the trailhead before continuing on its own path. Mount Muller Loop, May 16, 2014. As the trail ascends (and, on the opposite end of the loop, descends) the mountain’s drier midland slopes, the forest quickly shifts to coniferous hemlock (Tsuga sp.) and fir (Abies sp.), clearly second-growth trees from their uniform size and dense distribution, but beginning to resemble a more mature woodland with a healthy understory carpeting the floor and a middlestory of smaller trees developing among the slender, unbranched columns that support the overarching canopy.
Mount Muller Loop, May 29, 2019. Just over 3.00 miles/4.80 km from the trailhead, the trail reaches the ridgeline and curves eastward, alternating between rolling meadows with increasingly sweeping views and close forest dwarfed by the harsh conditions of higher altitude. Posted signs name each meadow, most after Forest Service workers who made the trail, e.g., Jasmine, Allison, Milsap, and Markham, and Jim’s Junction. From Jim’s Junction on Mount Muller’s western crest, the Snider Ridge Trail connects to the North Point and Kloshe Nanitch approximately 3.00 miles/4.80 km westward. Mount Muller Loop, May 16, 2014. 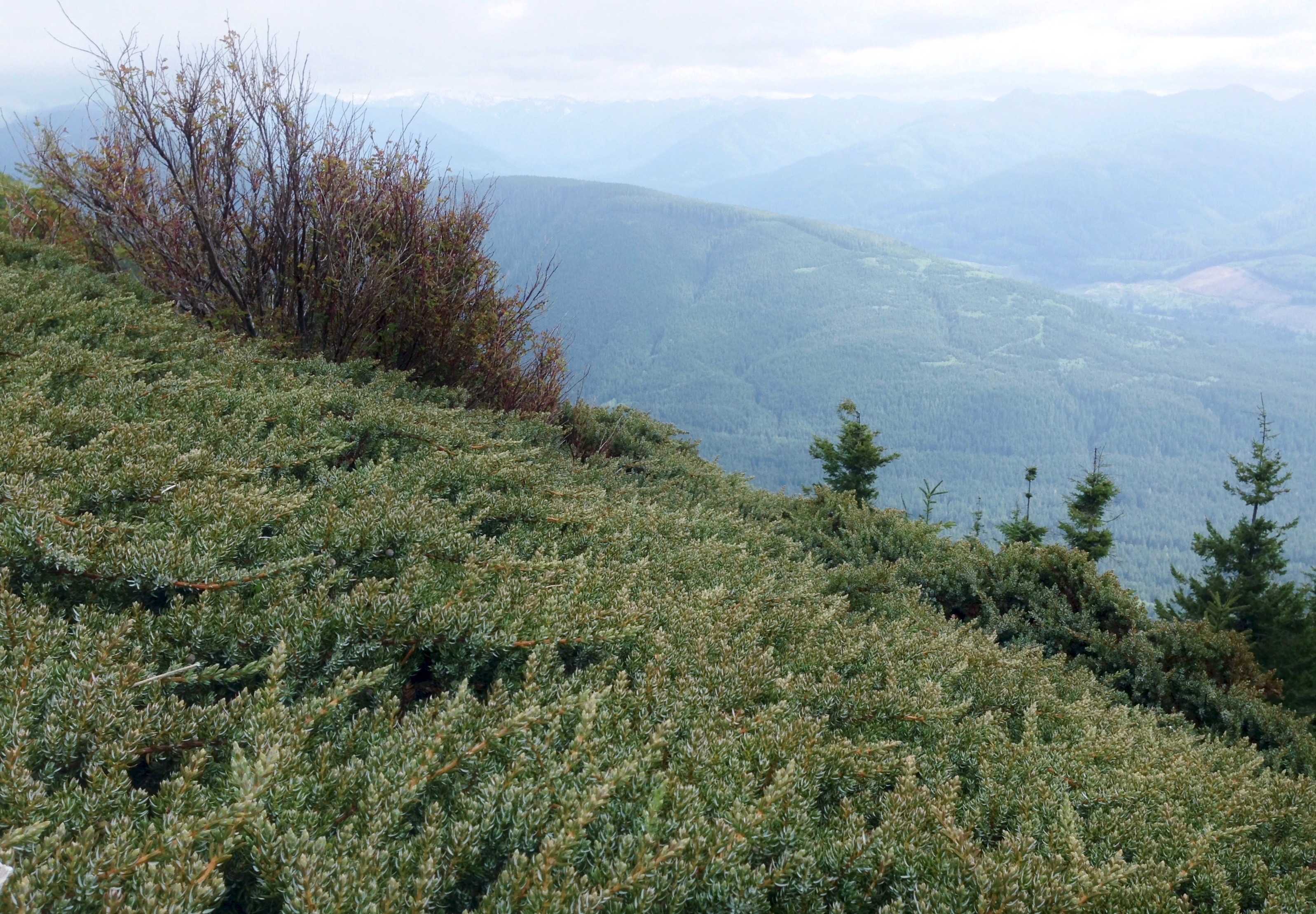 At Mount Muller’s higher elevations where recovery from past clear-cut logging takes place more slowly, the teeming second-growth forest has yet to finish thinning itself to the more natural, lushly layered woodland that has returned farther down the mountain, leaving the ridgetop littered with debris and bereft of most other life. Mount Muller Loop, May 16, 2014. 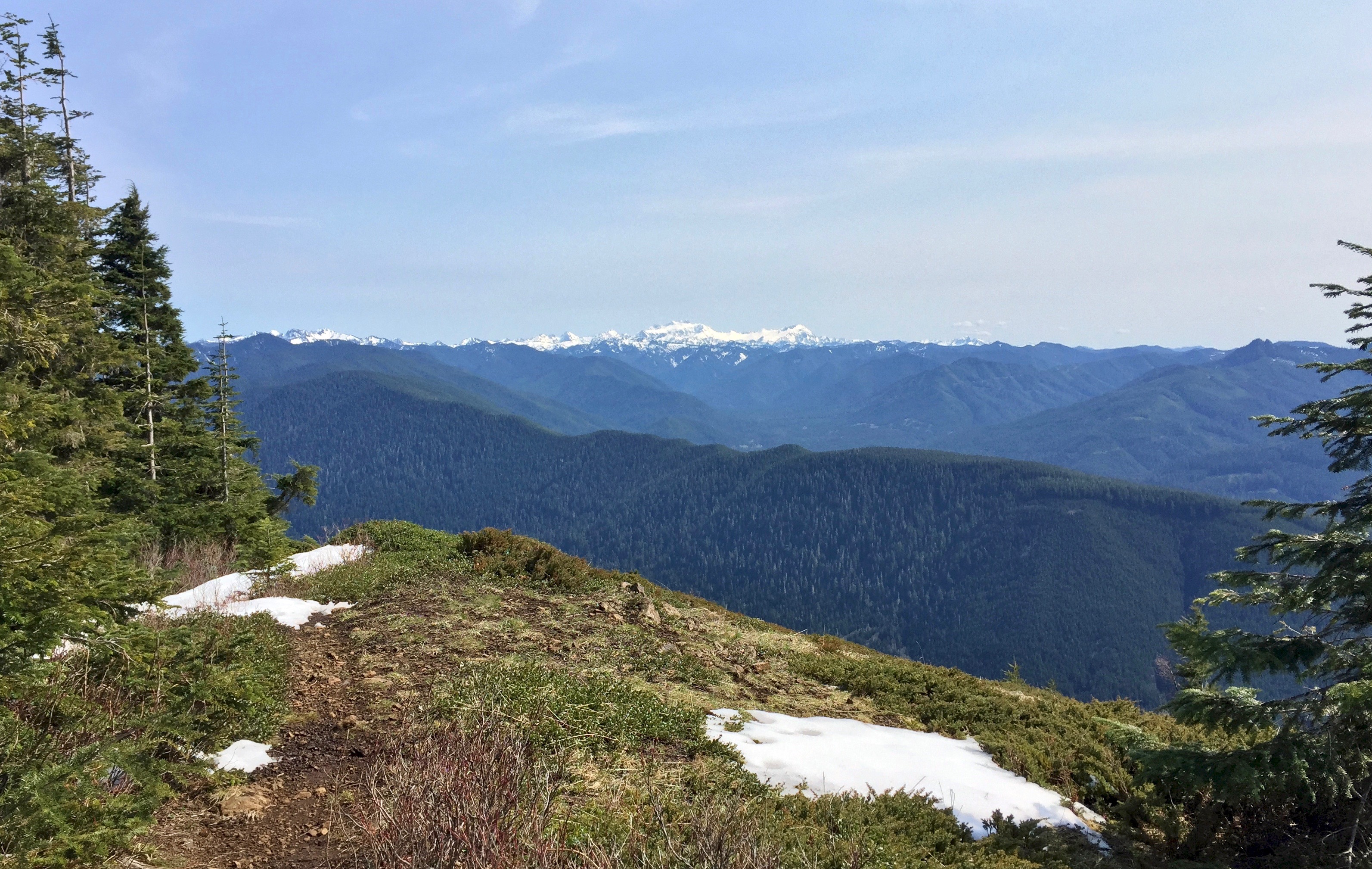 At approximately 5.00 miles/8.00 km from the trailhead, a short side trail leads up to Mount Muller’s summit. Set into the forest, the summit provides a well-framed view of Mount Olympus sitting on the southeastern horizon. Mount Muller Loop, April 19, 2015. Just beyond the side trail to the summit, another side trail leads from the main loop to Panorama Point, which offers the most expansive vistas of the trail, including, again, a direct view of Mount Olympus. Mount Muller Loop, April 19, 2015. From Panorama Point and the increasingly rocky slopes eastward, the view soars across Lake Crescent and on to Mount Olympus. Mount Muller Loop, April 19, 2015. On a clear day, Mt. Baker (in this photo, what appears to be a small cloud on the horizon) can be spied away northeast across the Salish Sea. Mount Muller Loop, April 19, 2015. 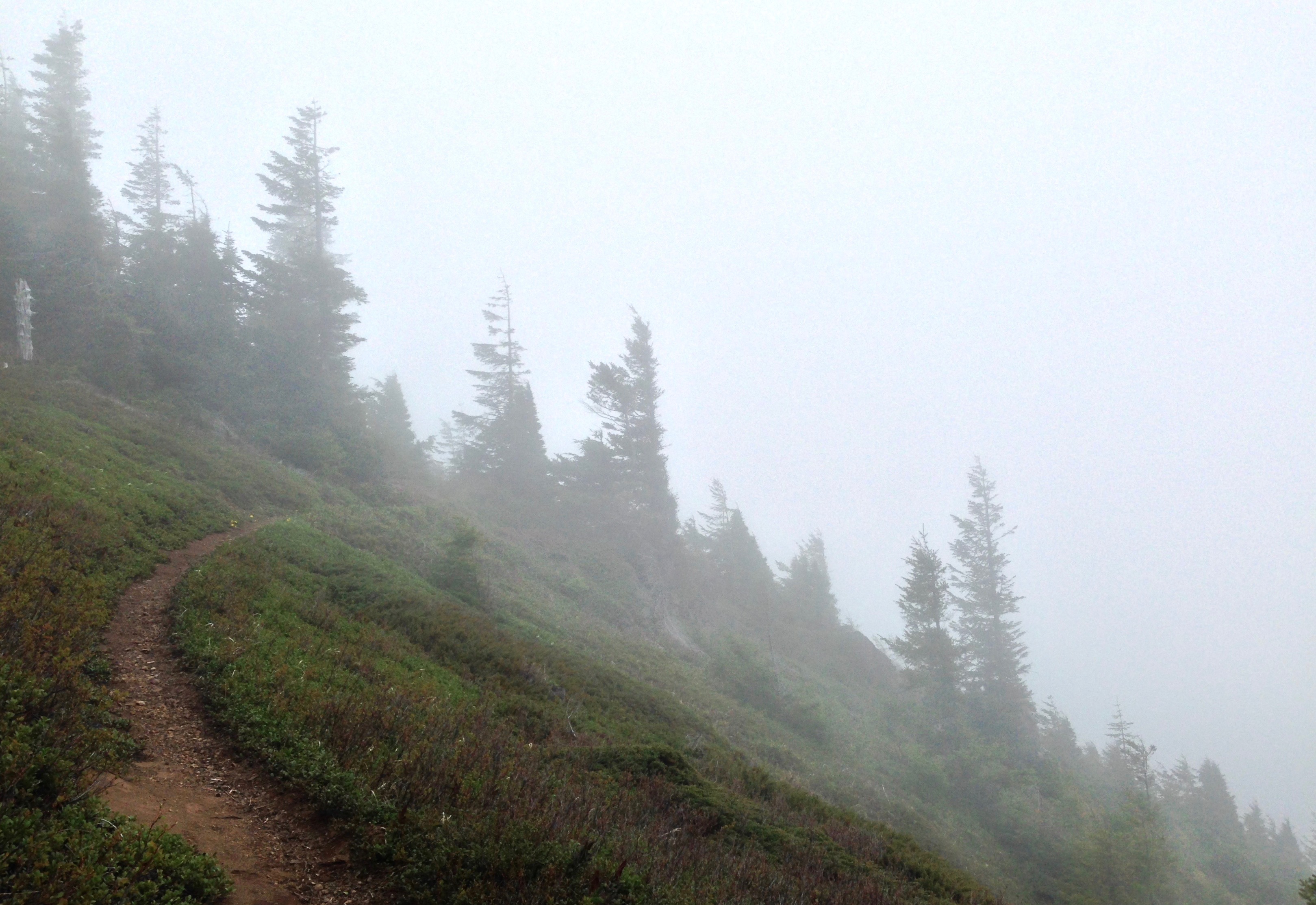 Even when they obscure the mountain’s panoramic vistas, the clouds that frequently sweep its slopes create their own surrealistic atmosphere. Mount Muller Loop, May 16, 2014. 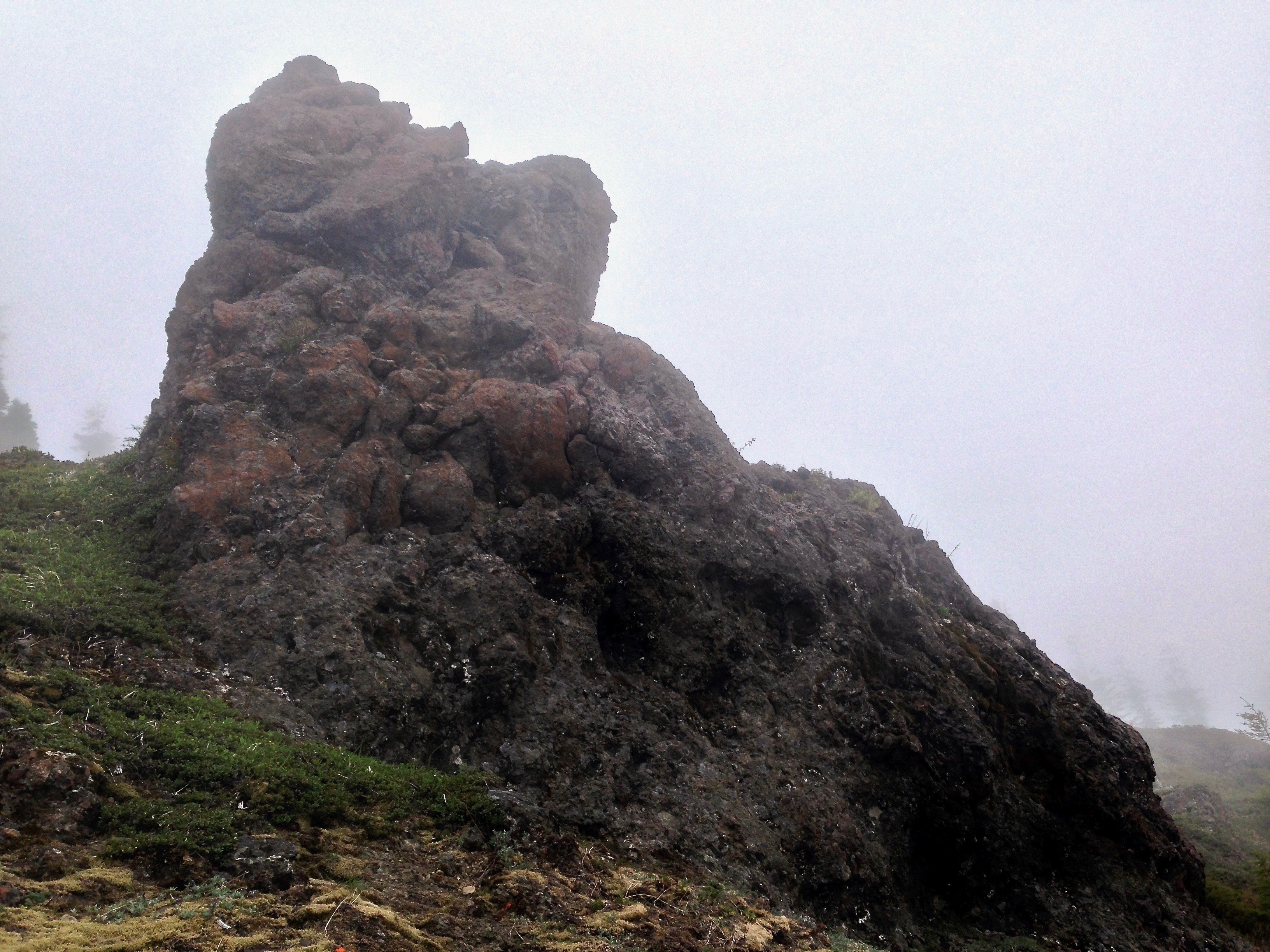 Even where stones dominate the mountainscape, look for life in niches here and there, including, clockwise from top left, lungwort (Lobaria pulmonaria), a lichen thought by medieval minds to resemble lung tissue; Cascade desert-parsley (Lomatium martindalei), indeed related to the dinnerplate garnish with which it shares its name; snow lichen (Stereocaulon sp.), here accented by a yellow avalanche-lily (Erythronium grandiflorum); broadleaf stonecrop, or, Pacific sedum (Sedum spathulifolium), a succulent known for its particolored leaves; another lichen whimsically known as devil’s matchsticks (Pilophorus acicularis); and, in the center, spreading phlox (Phlox diffusa).
Mount Muller Loop, May 16, 2014 and April 19, 2015. Approximately 8.00 miles/12.80 km from the trailhead, a short side trail leads to another notable stone feature: Fouts Rock House, a naturally occurring stone lean-to formed by two garage-sized boulders. From inside, the views out either end illustrate its ample capacity to harbor not only two- but likely four-legged creatures on occasion. Mount Muller Loop, April 19, 2015 and May 29, 2019. At approximately 9.00 miles/14.50 km from the trailhead, the trail drops abruptly to a paved private drive. Turn right onto the road (do not cross the bridge) and continue for approximately 0.25 miles/0.40 km, keeping a wary eye for the trail to diverge to the right and continue into the forest.
Mount Muller Loop, May 16, 2014. The remaining 3.00 miles/4.80 km of the trail are flat and often within earshot of Highway 101’s whir, traversing the verdant lowland forest that hems the mountainside. Mount Muller Loop, May 29, 2019.