What Lake Ann itself lacks in character is more than compensated for by its dramatic setting at the base of Mount Shuksan’s steepled western wall, festooned with dramatically sculpted glaciers creeping inexorably toward their cliffside finales.  The  trail follows the mountainous ridge extending northwest from Mount Shuksan, known as the Shuksan Arm, into a grassy basin spattered with ponds and streams before climbing steeply to the adjoining saddle that cradles Lake Ann.  From the lake, a short side trail zigzags up the mountain’s pitched slope to the Lower Curtis Glacier, affording an intimate view of the glacier’s jagged edge and a bird’s-eye glimpse of the Baker River Valley beyond.  Given its ease of access, unique features, and available campsites, the trail is a popular late summer and autumn hike — expect to encounter a few others on the way and along the lakeshore, especially on weekends. 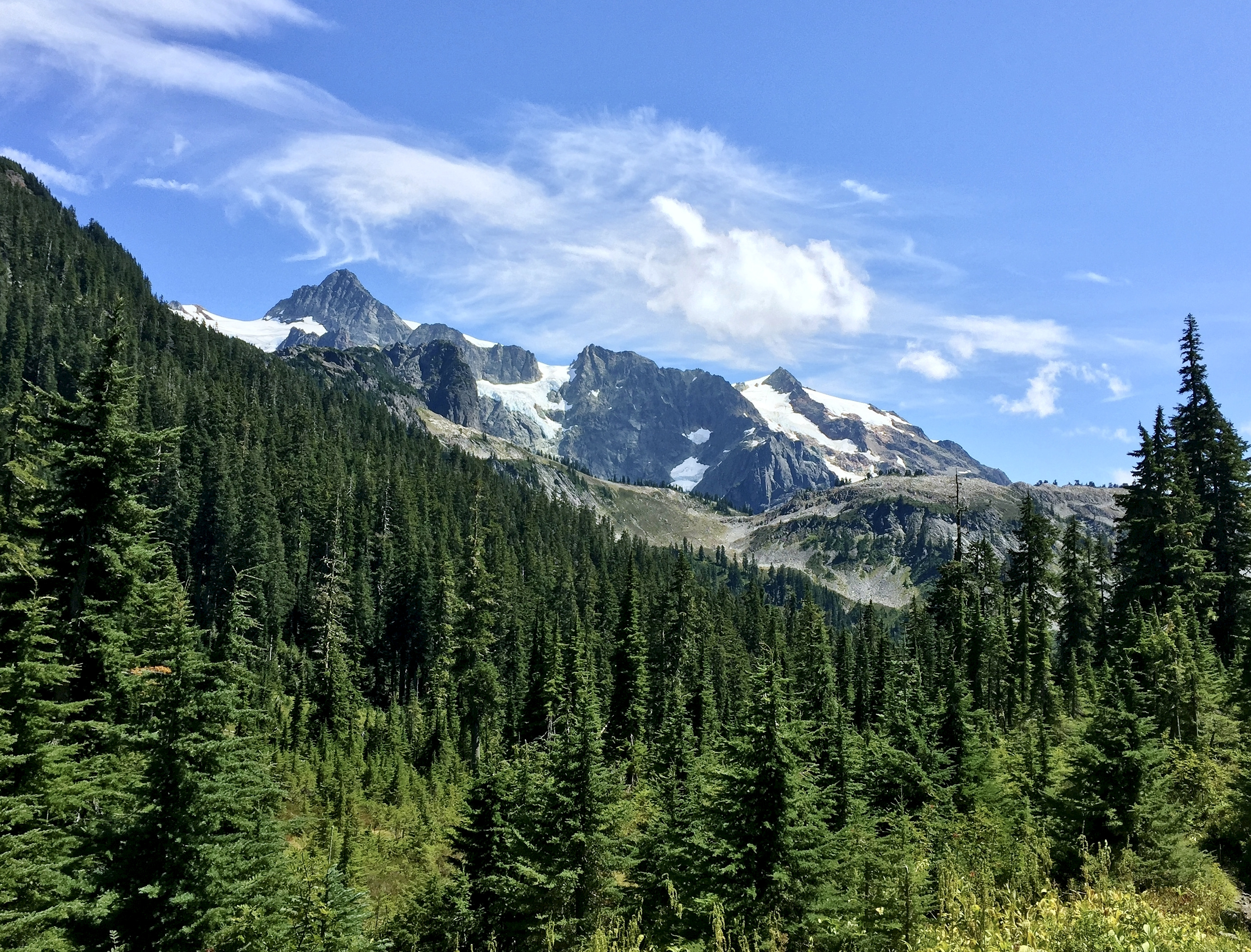 The trail to Lake Ann weaves in and out of forest as it descends into the stream-lined basin along the Shuksan Arm, providing peekaboo views of both Mount Shuksan (here) and Mt. Baker. Lake Ann Trail, August 09, 2015. 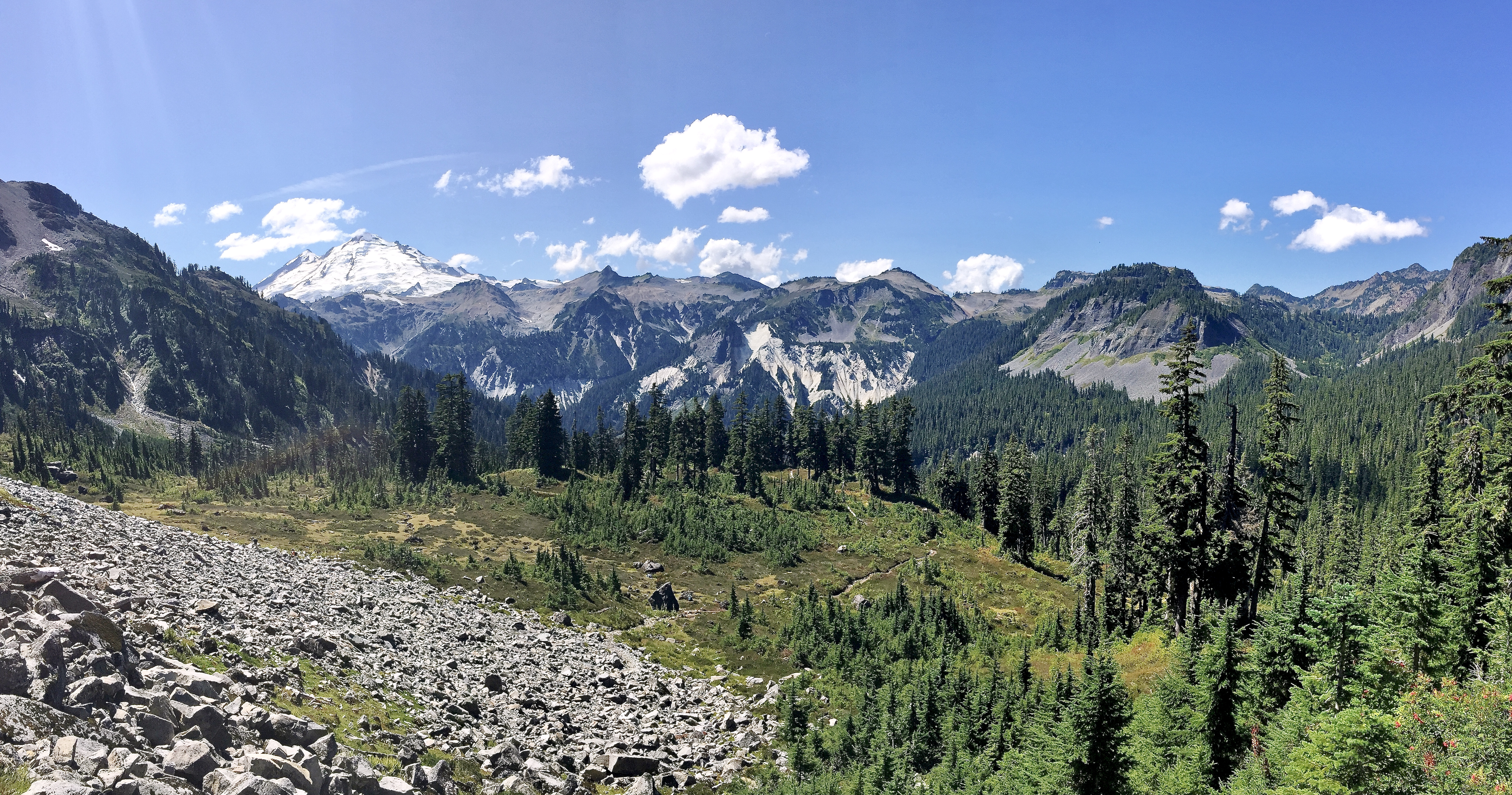 On the approach to Lake Ann, the trail climbs a steep saddle at its juncture with the Shuksan Arm, which provides a sweeping view back down into the basin and across to Mt. Baker.
Lake Ann Trail, August 09, 2015. 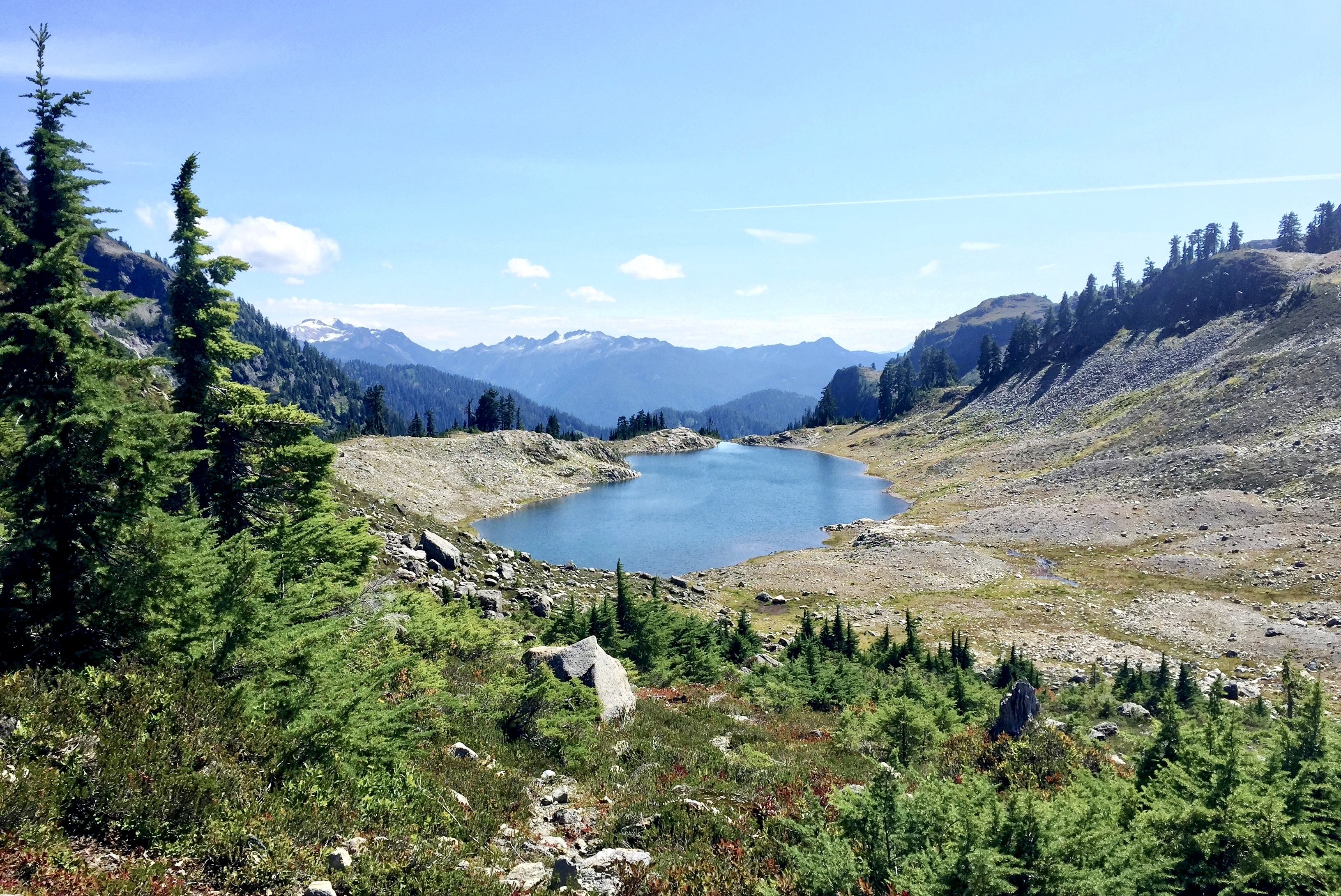 From the shore of Lake Ann, the Shuksan Arm trails into the distance beyond the saddle.
Lake Ann Trail, August 09, 2015.

Beside Lake Ann, Mount Shuksan’s lower, western end rises in sharp peaks reminiscent of Italy’s Dolomites. The crevices between the peaks are known as the Fisher Chimneys and form a popular climbing route to the summit. Lake Ann Trail, August 09, 2015. 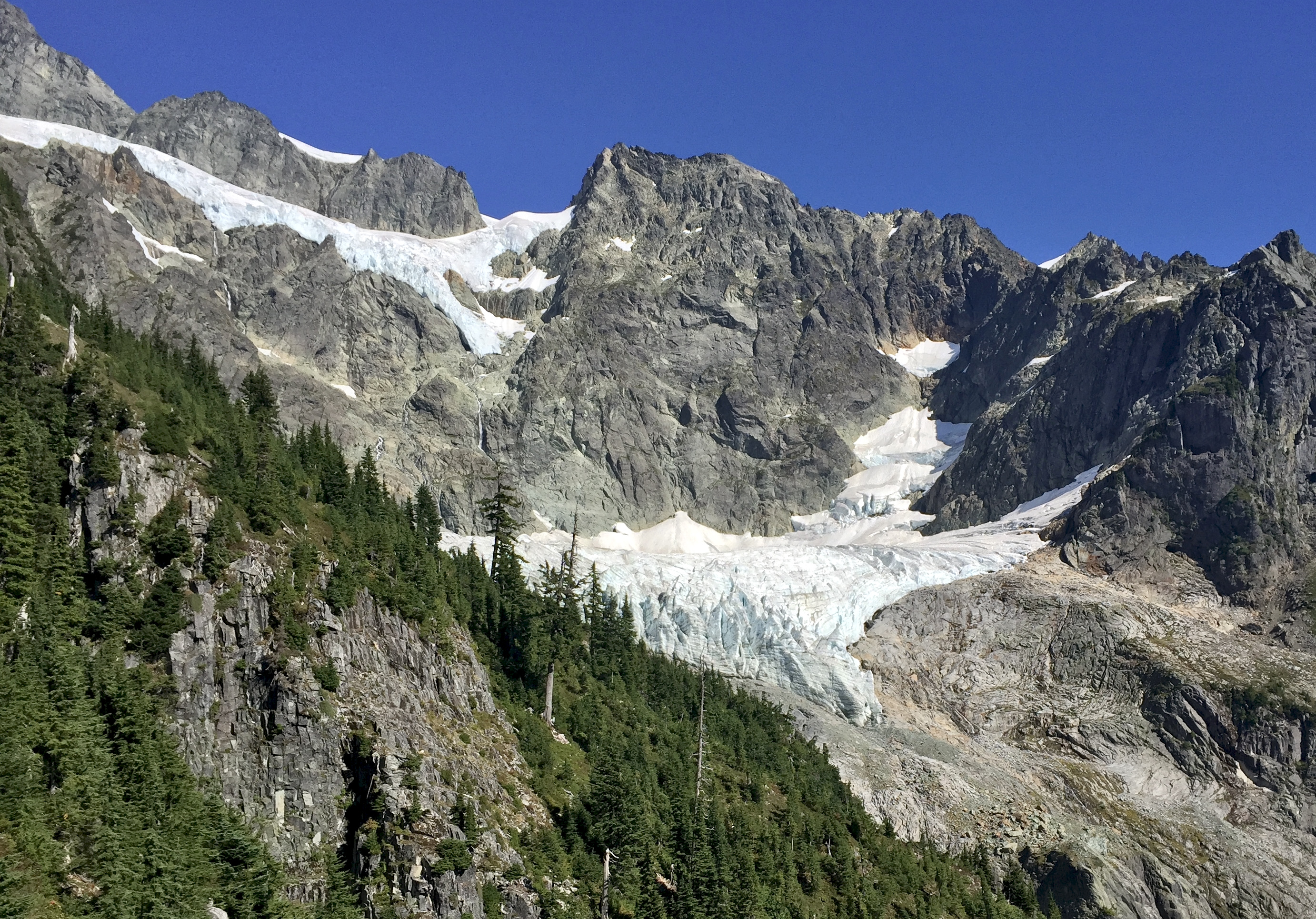 The Upper and Lower Curtis glaciers drape Mount Shuksan’s rugged western flank. A side trail from Lake Ann climbs the forested slope on the left of this photo to the leading edge of the Lower Curtis Glacier. Lake Ann Trail, August 09, 2015. 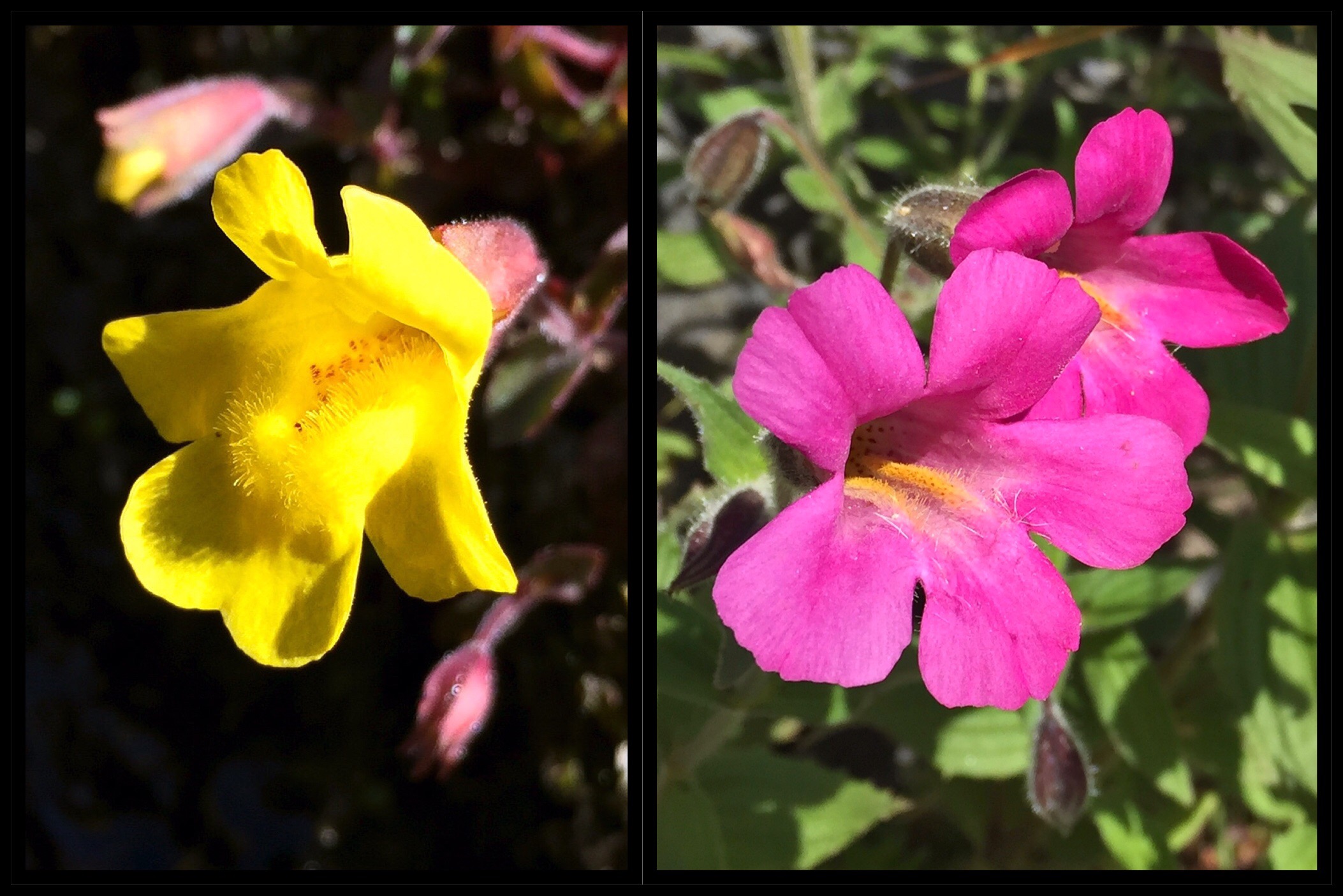 Accumulated decades of snowfall line Lower Curtis Glacier’s deeply crevassed edge, here tipped by a sphinx-like head gazing toward the eventual repositories of its meltwaters, Baker Lake and Lake Shannon. Care should be exercised to avoid falling ice along the glacier’s crumbling wall, as well as the precipitous cliff below. Lower Curtis Glacier Trail, August 09, 2015.