Although a strenuous climb, the summit of Mt. St. Helens is attained as a day hike, due in no small part to the loss of the mountain’s top third during its 1980 eruption.  However, the hike must be planned well in advance.  The required climbing permits (available for reservation through the U.S. Forest Service via the first “Required Pass” link above) are limited in number per day and most sell out soon after they become available for reservation in February of each year.  In addition, a standard Northwest Forest Pass or equivalent is also required to park at the trailhead.

Although the Monitor Ridge climbing route is considered the April-through-October “summer” route, snow may linger late or arrive early during that period, which, depending on individual preference, may render the mountain’s boulderfields and loose, ashy scree either more or less difficult to navigate.  (This profile features photos from one hike when snow was present and another when it was not.)  Be sure to check the Forest Service’s site for weather forecasts and recent trip reports to help prepare for the conditions that chance to exist on the day you reserved your climbing permit.  And, given that this hike is considerably more extreme that most other day hikes, be sure to consider the Forest Service’s recommendations for appropriate apparel and gear.

The 10.00-mile/16.00-km round-trip climbing route can be roughly divided into three distinct sections.  From the trailhead at the Climbers Bivouac (i.e., parking lot, although an outhouse and a few campsites are available), the wooded Ptarmigan Trail leads approximately 2.20 miles/3.50 km to the treeline and base of Monitor Ridge.  The ridge’s trail-less boulderfield then stretches approximately 2.00 miles/3.20 km in a seemingly endless series of rocky knolls, each unseen until the previous is attained.  Although the ridgeline is fairly easy to follow, aided by wooden posts planted at intervals to mark the way, some boulder scrambles are required.  Finally, the last approximate 0.75-mile/1.20-km section follows a trail of sorts up steep scree slopes with the loose consistency of fine gravel or course sand, requiring extra exertion for forward motion just when energy is waning and air is thinning. 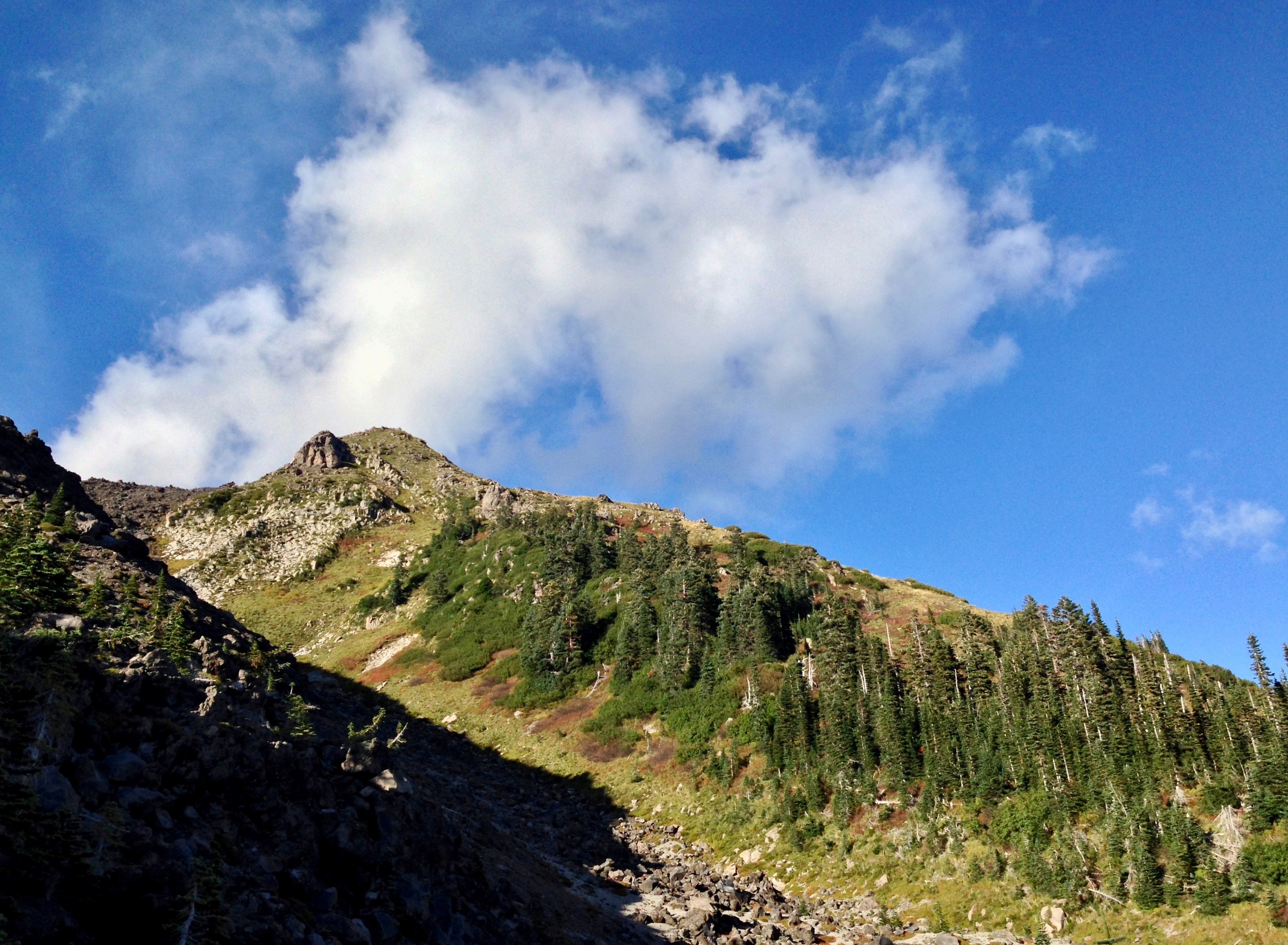 An outcrop at the foot of Monitor Ridge towers like a gatepost above the climbing route — for now. From this point, most vestiges of a trail disappear amongst the boulders, leaving hikers to pick their way up the ridge by whatever path appears easiest, aided occasionally by upright wooden poles inserted along way; hence, the designation “climbing route,” rather than the more familiar “trail.”
Mt. St. Helens, Monitor Ridge, September 28, 2014. 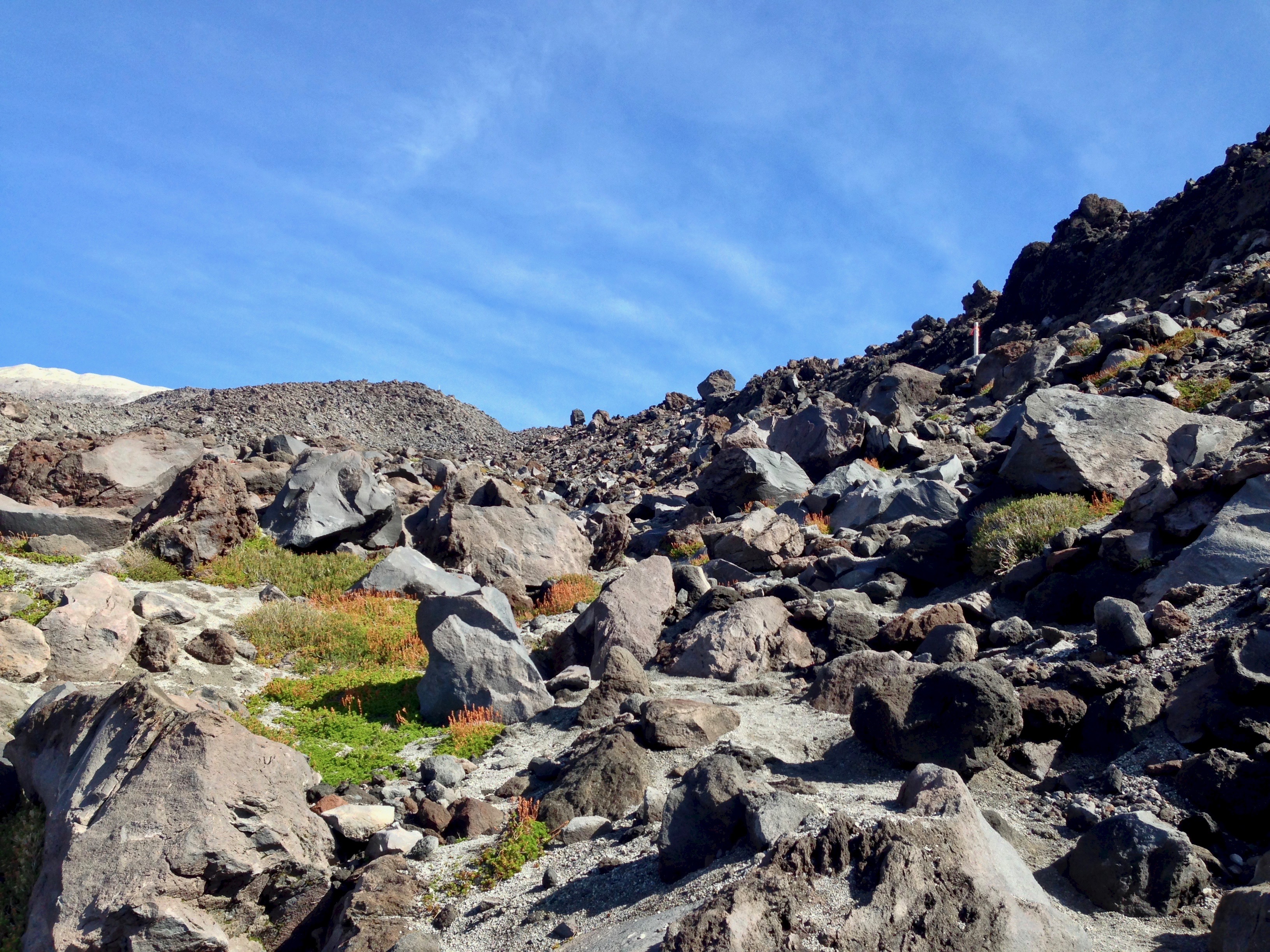 Monitor Ridge’s scattered boulders appear as if — and likely were — flung down the mountainside. Here, the ashen crater rim just breaks above the skyward horizon on the left. In the upper right, one of the route’s guide poles is visible just below the ridgeline.
Mt. St. Helens, Monitor Ridge, September 28, 2014. 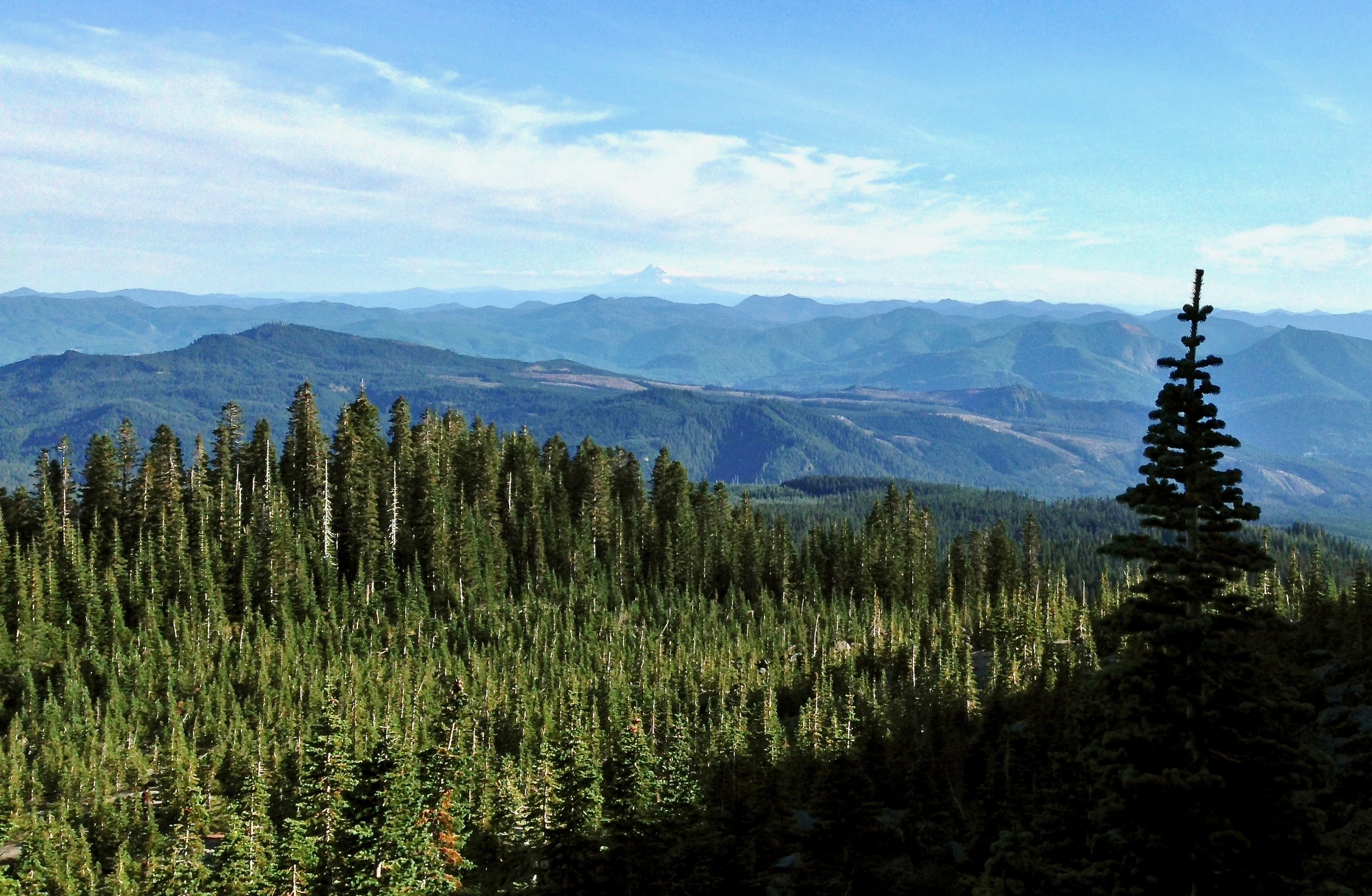 From farther up Monitor Ridge, the distinction between the new forest in the blast zone of the volcano’s 1980 eruption and the much taller surviving forest downslope becomes more apparent. Mt. Hood presides over the southern horizon. Mt. St. Helens, Monitor Ridge, September 28, 2014. 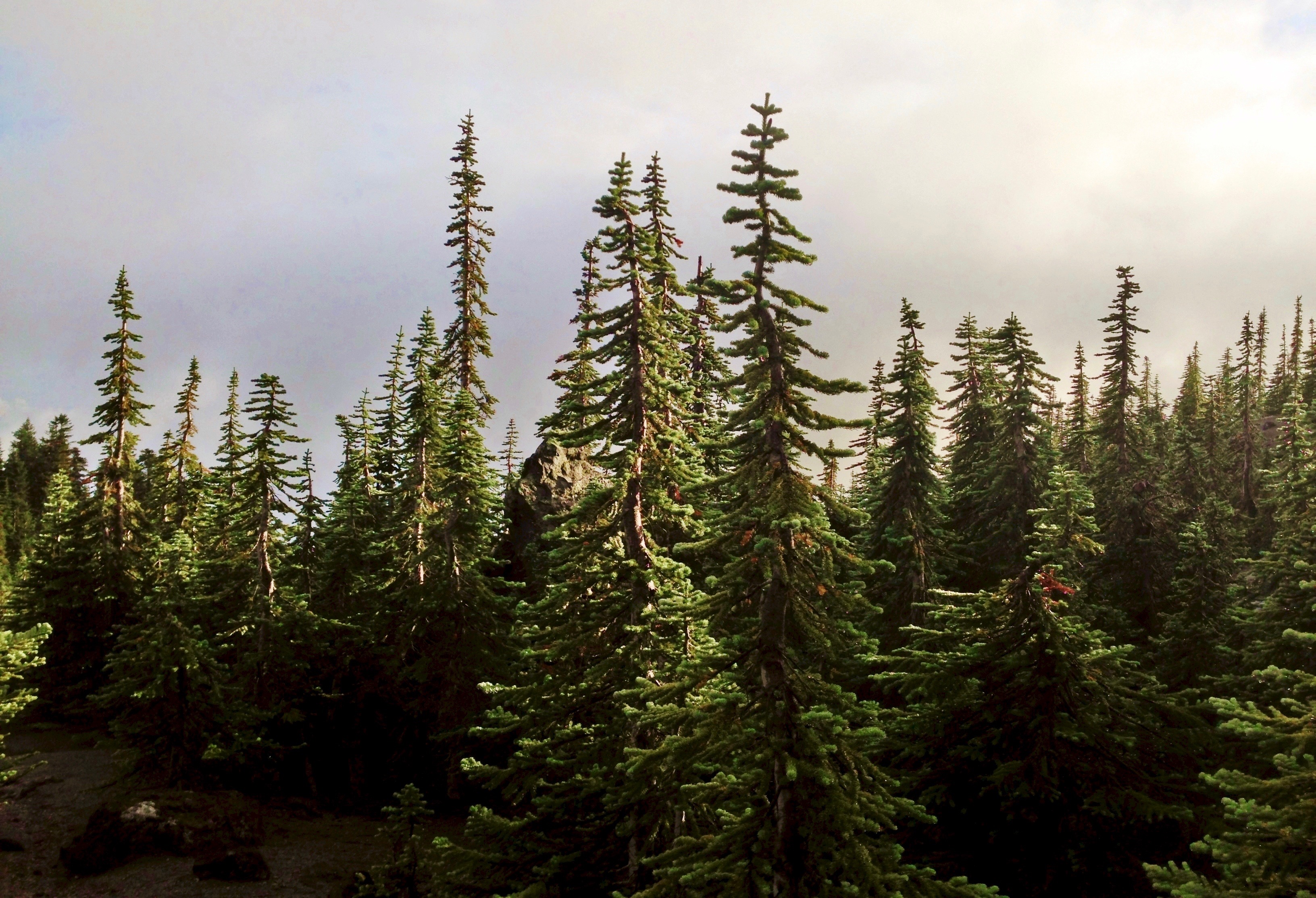 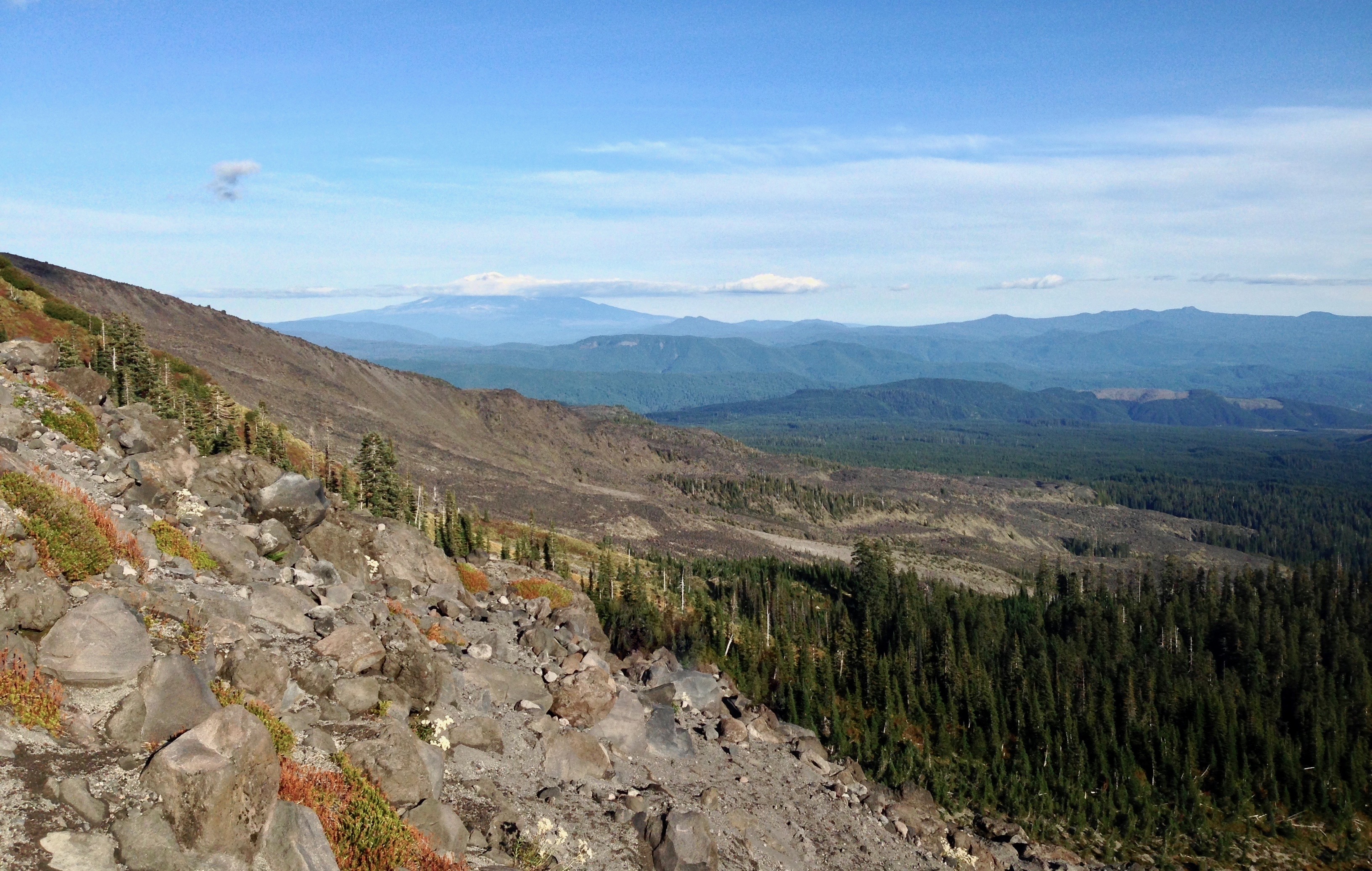 A still treeless swath of devastation from the 1980 eruption reaches like a giant handprint down the mountain’s southern flank, likely the work of a volcanic mudflow. Mt. Adams tops the eastern horizon.
Mt. St. Helens, Monitor Ridge, September 28, 2014. 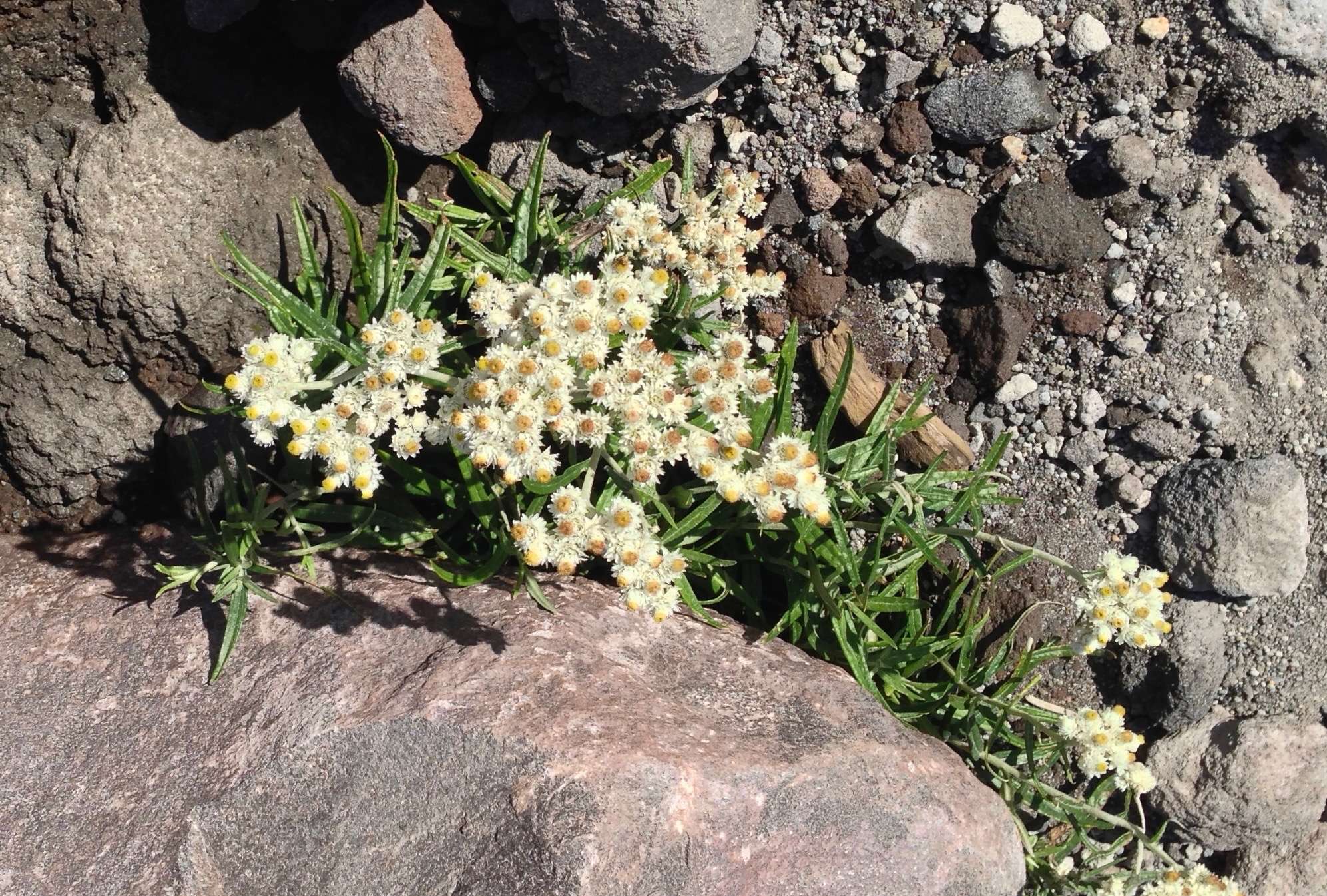 Throughout the boulderfields that strew the route’s midsection, jagged rock formations appear as if thrust from within the earth. Mt. St. Helens, Monitor Ridge, October 12, 2013. The route passes to the other side of the ridge and its balancing boulders and now looks down upon the tip of the gatepost peak (right) that appeared so imposing at the treeline. Yale Lake appears in the southwestern distance. Mt. St. Helens, Monitor Ridge, September 28, 2014. 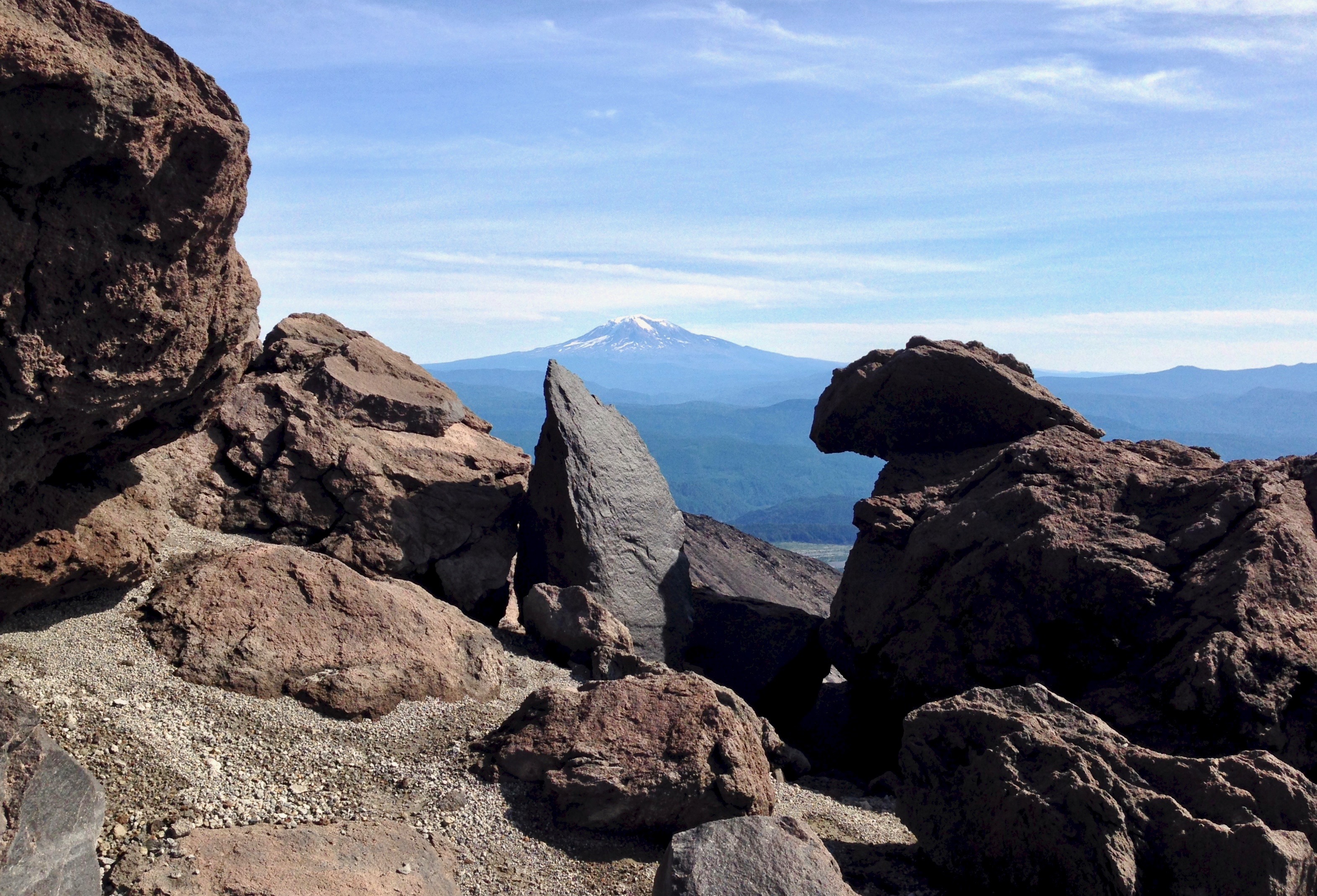 A pair of seismic instruments perches on a landing near the top of the boulderfield.
Mt. St. Helens, Monitor Ridge, September 28, 2014. Hikers appear as ants filing up the ashy scree that stretches beyond the boulderfield toward the summit. The Swift Glacier, newly reformed since the mountain’s 1980 eruption, has again begun stretching down the southern slope to the right in this photo.
Mt. St. Helens, Monitor Ridge, September 28, 2014. 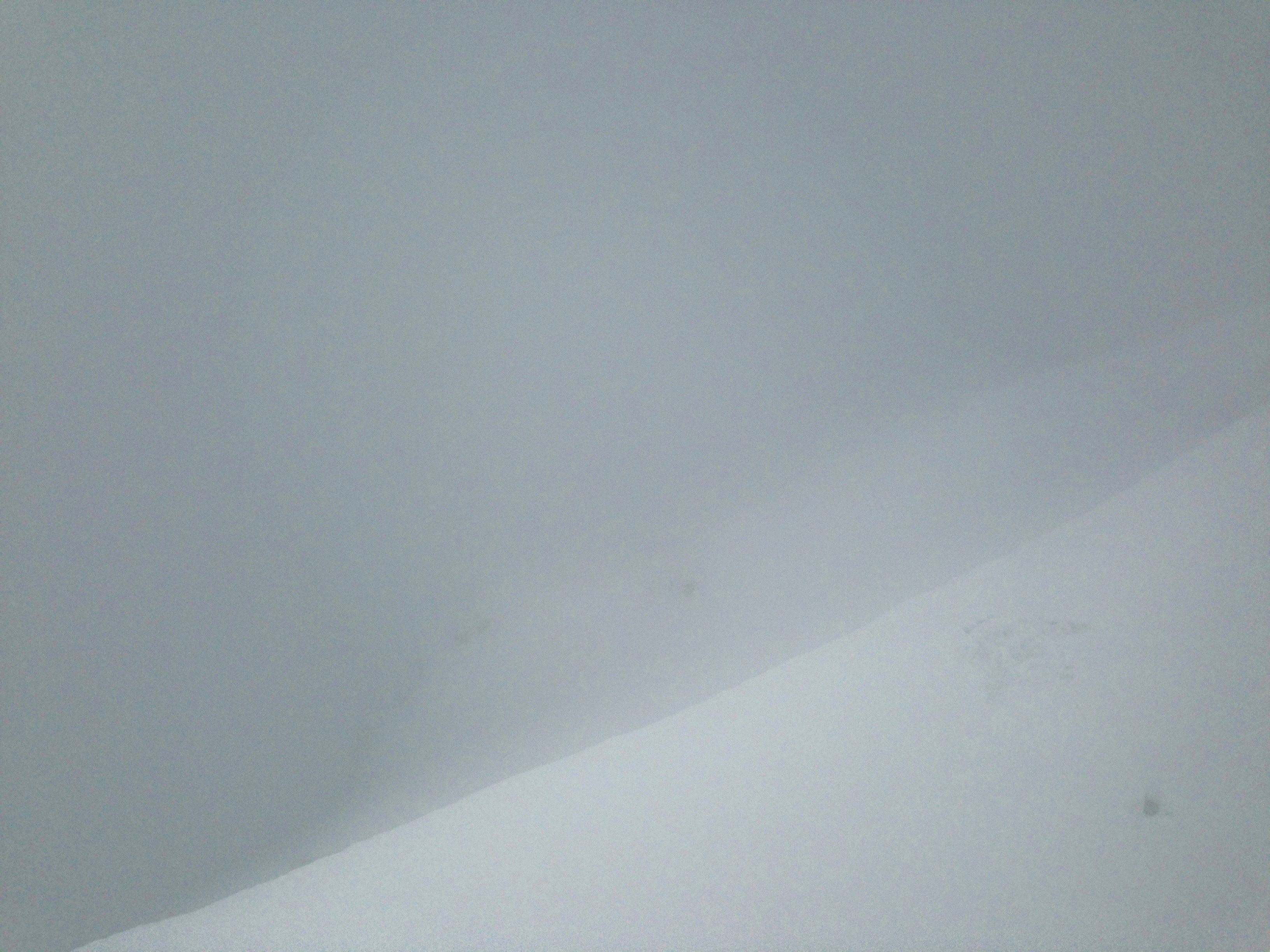 When clouds, fog, or snow are present, approach the crater’s edge with extreme caution — there is but a step between the rim and the vast emptiness beyond. Moreover, blowing snow forms cornices — ledges overhanging the rim with no underlying support — that can break under the weight of even a mere human. Mt. St. Helens, October 12, 2013. 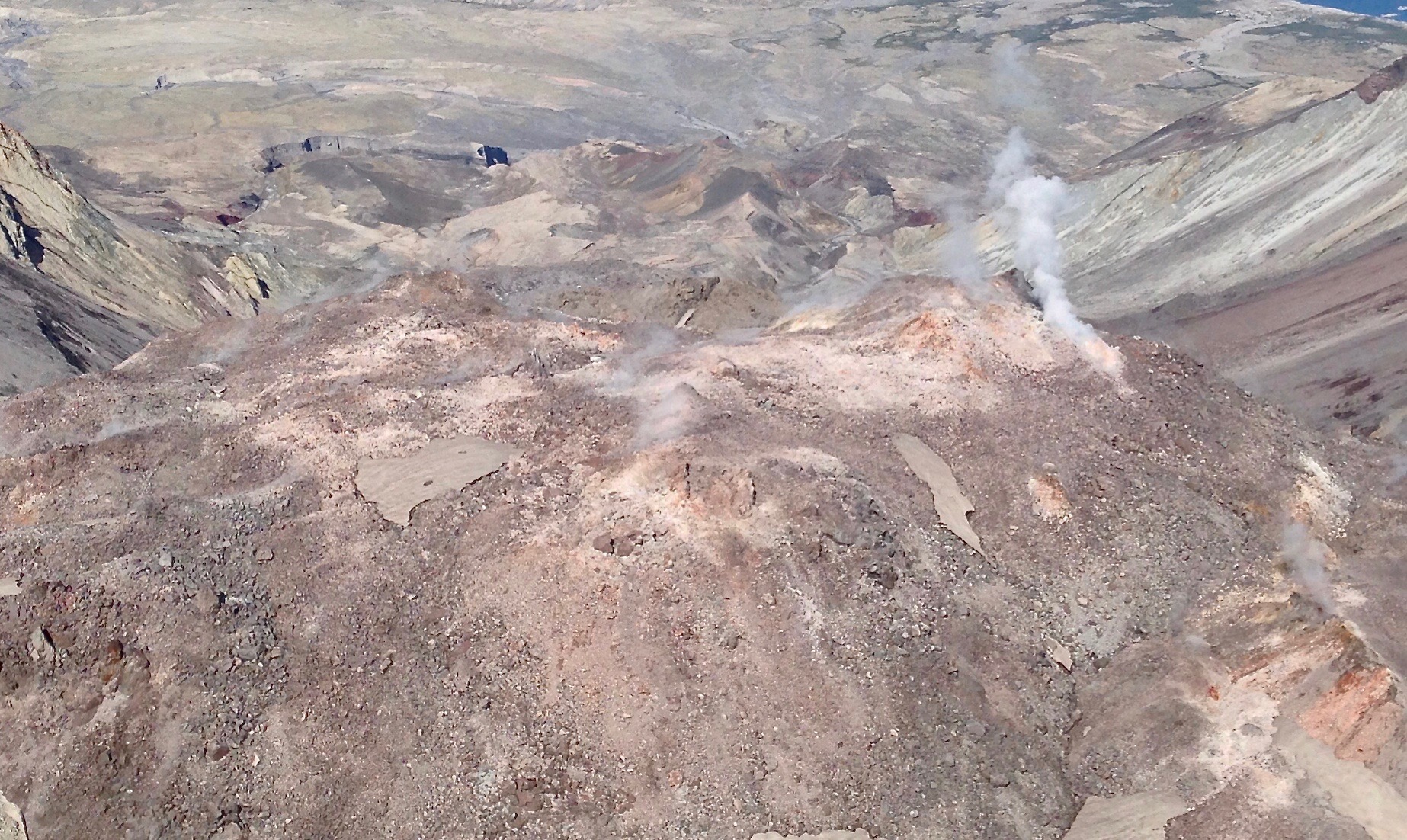 Steam continuously emanating from vents across the dome growing inside the crater creates an ominous atmosphere. So, too, the consistent clatter of rockfalls down the crater walls.
Mt. St. Helens, September 28, 2014. 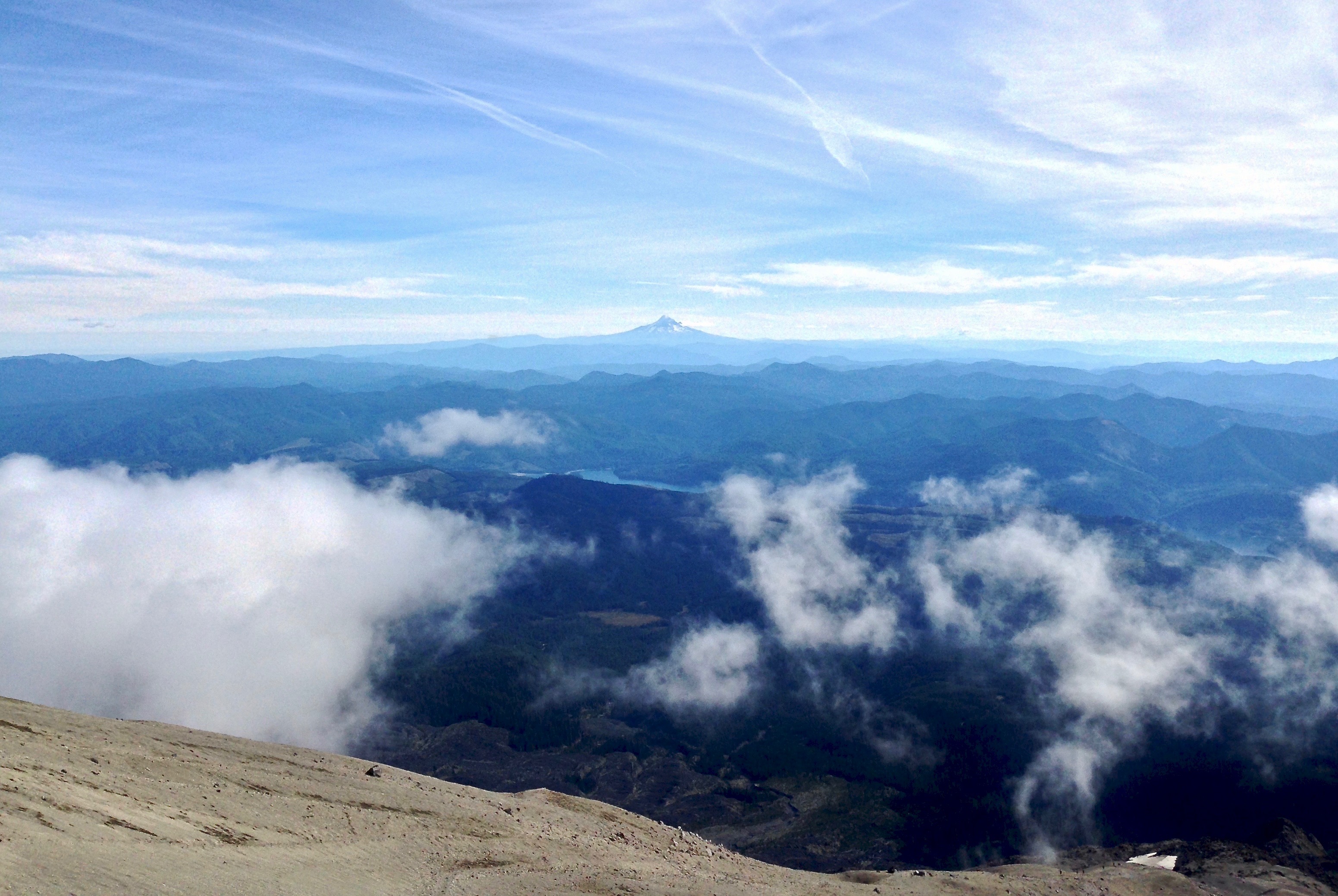 From another trail north of the mountain, the climbing route’s lofty destination is visible on the far side of the crater between its higher east and west rims. Mt. St. Helens’ long volcanic history, along with that of its nearest neighbors, Mt. Adams and Mt. Hood, is documented variously in the lore of the indigenous peoples who lived in their shadows. In one version, Mt. St. Helens was Loowit, “Smoking Mountain” or “Fire Mountain,” the great chief Tyee Sahale’s faithful and generous old firetendress, to whom he granted eternal life, youth, and beauty. When Loowit could not choose between Tyee Sahale’s two quarrelsome sons, Pahtoe (Mt. Adams) and Wy’East (Mt. Hood), they fought over her by hurling great stones at one another and scorching the earth between them. In anger, Tyee Sahale smote all three but, repenting himself, transformed each into a great mountain: Loowit, still fair with her (formerly) symmetrical, white-mantled cone, Wy’East, still proud with his sharply upthrust peak, and Pahtoe, now crestfallen, his cock-eyed summit downcast in mourning for his lover’s snow-bound fate. Mt. St. Helens, Boundary Trail, July 18, 2009.