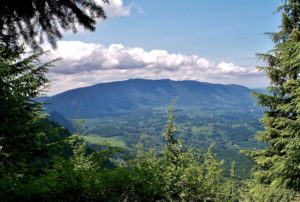 Rattlesnake Mountain is the easternmost in the range of low mountains known as the Issaquah Alps, which also include the other similarly ominous-sounding peaks Cougar Mountain and Tiger Mountain.  Don’t worry, this one’s name is a misnomer – there are no rattlesnakes west of the Cascades.  Rattlesnake Mountain is traversed by an 11.00-mile/17.70-km trail along its spine, with trailheads on either end.  Its highlight is Rattlesnake Ledge, which is actually the first of three stone benches that jut dramatically from the mountain’s eastern end, and, as a worthy destination, is a more moderate round-trip hike of only 4.00 miles/6.40 km from the Rattlesnake Lake trailhead.  On a clear day, the ledges afford magnificent views down the several mountain valleys and ridges that converge below.  Farther west, the mountain’s dense forest opens to sweeping northward views at East Peak, Grand Prospect, and Stan’s Overlook and, where logging has felled the forest on the mountain’s far side, southward to Mt. Rainier.  Because the mountain is subject to routine logging operations, the trailside beyond Rattlesnake Ledge is a patchwork of clear-cuts, tangled thickets, and more mature woodland.  Wildflowers flourish in the new-found sunlight of the recently logged areas, whilst fungi thrive on the detritus left behind.

Because the trail’s full round-trip distance to and from either trailhead may be excessive for most (22.00 miles/35.40 km), this profile is divided into two more manageable hikes, each just under 10.00 miles/16.00 km round-trip, one beginning at the east end’s Rattlesnake Lake and attaining the ledges and East Peak, and the other beginning at the west end’s Snoqualmie Point Park and reaching Stan’s Overlook and Grand Prospect.  For those wishing to go further in either direction, East Peak and Grand Prospect are separated by approximately 1.10 miles/1.80 km of dense forest and clear-cut.

Given the mountain’s proximity to Puget Sound and relatively low elevation, it is generally hikeable year round.  However, it can receive significant snowfall in winter, which, even if not present at the trailheads, accumulates and deepens quickly as the trail climbs, often trodden to ice by the many foregoing visitors.  Be sure to check recent trip reports at the “Additional Trail Info” links below before setting forth and take appropriate footwear.  And, given their relative ease of access, the ledges are often thronged with hikers throughout the day.  Try arriving early to enjoy the views without the distracting crowds, especially those inevitable few who teeter on the literal brink of disaster at the ledges’ edges. 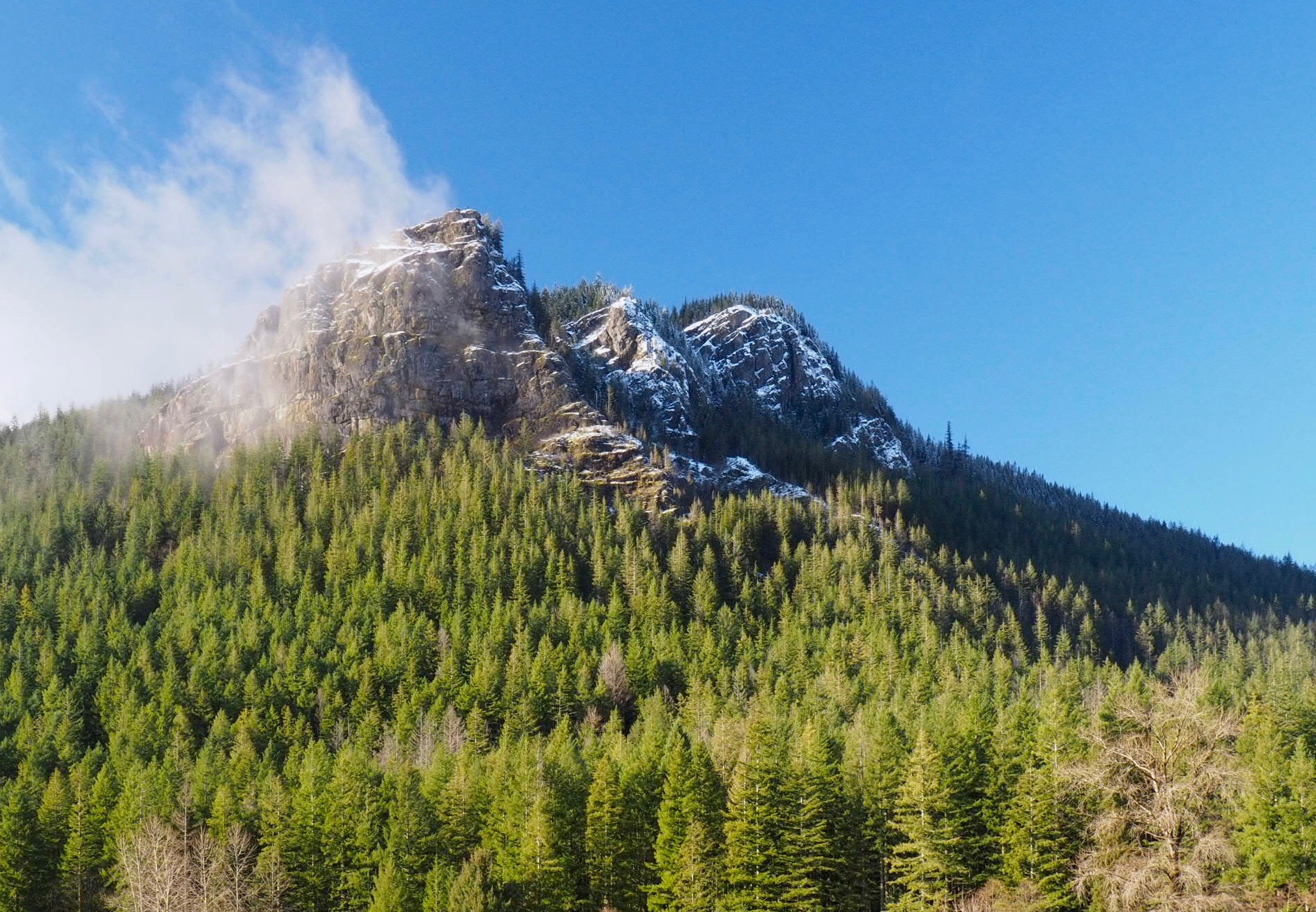 From the trailhead at the edge of Rattlesnake Lake, the ledges loom dramatically above.
Rattlesnake Mountain Trail, December 30, 2016. The trail wends through a pleasant woodland of fir and hemlock. Here and there, oddly placed boulders dot the forest floor, fenced by the columns of later-sprung trees.
Rattlesnake Mountain Trail, April 26, 2014. In early spring, red-flowering currants (Ribes sanguineum) – often more red in bud than in bloom – are one of few wildflowers to brighten the mountain’s eastern woodland.
Rattlesnake Mountain Trail, April 26, 2014. Even the downward views from the Rattlesnake ledges are impressive — and demonstrate the need for great caution along their abruptly precipitous edges. Here, the third ledge peers down upon the first two, as well as upon Rattlesnake Lake and the trailhead on its far shore.
Rattlesnake Mountain Trail, April 26, 2014. The Middle Fork Snoqualmie River Valley, flanked by rows of Cascade peaks, is one of several that meet at the foot of Rattlesnake Ledge. Rattlesnake Mountain Trail, April 26, 2014. Clouds stream from atop Mount Washington, which anchors the eastern view from the Rattlesnake ledges. At the far end of the valley below, one can barely spot Chester Morse Lake and Masonry Pool, which were formed by dams on the Cedar River to provide water for Seattle, Washington.
Rattlesnake Mountain Trail, December 30, 2016. 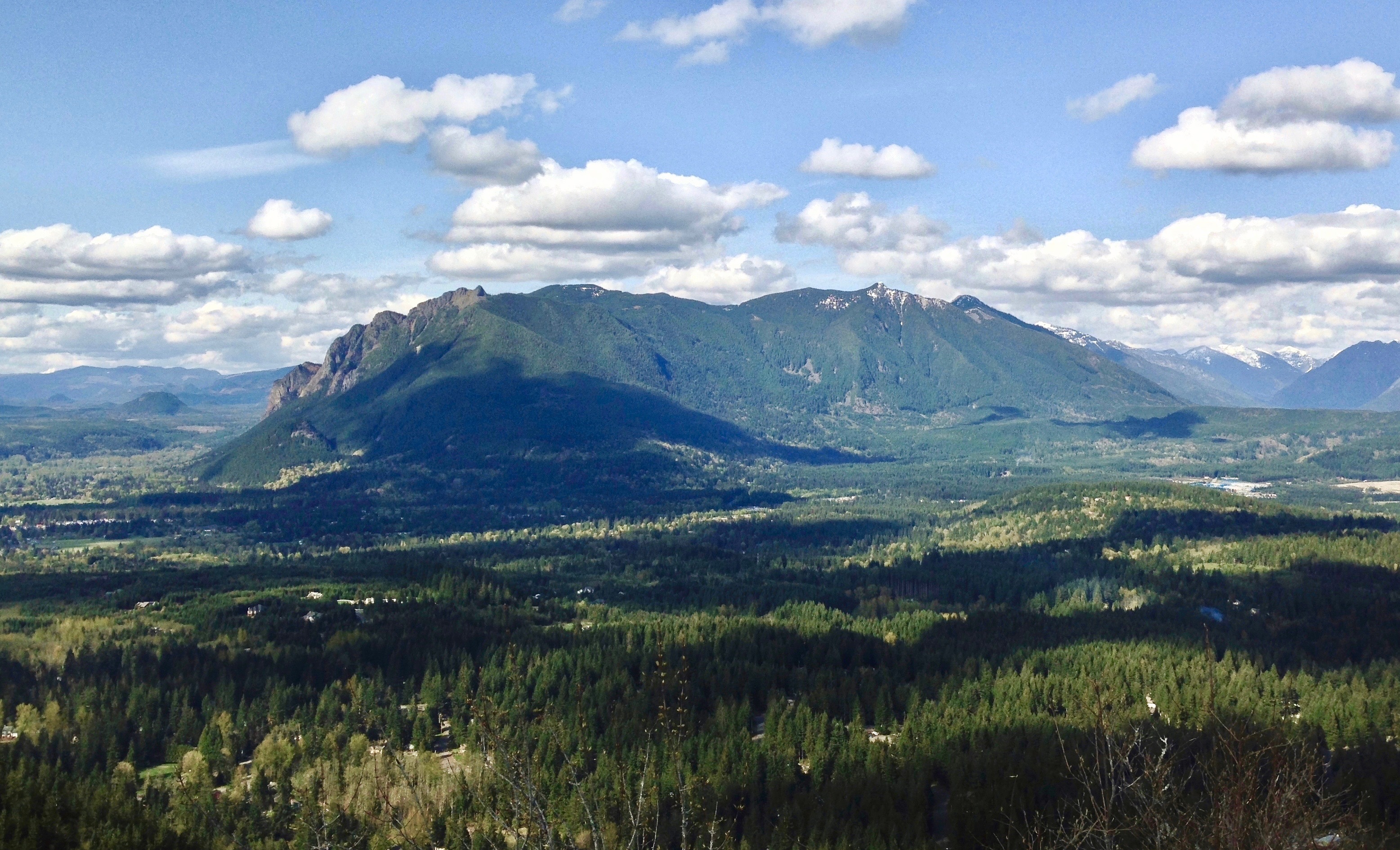 Because of routine clear-cut logging on Rattlesnake Mountain, the trail passes through woodlands in various stages of destruction and recovery, from airy, deciduous lowland forest (upper left), to seedlings so dense the earth is barren beneath them (upper right), to more mature forest with a balance of understory and middlestory plant life (lower left), to vast, newly levelled swaths (lower right).
Rattlesnake Mountain Trail, April 05, 2014 and July 22, 2017. 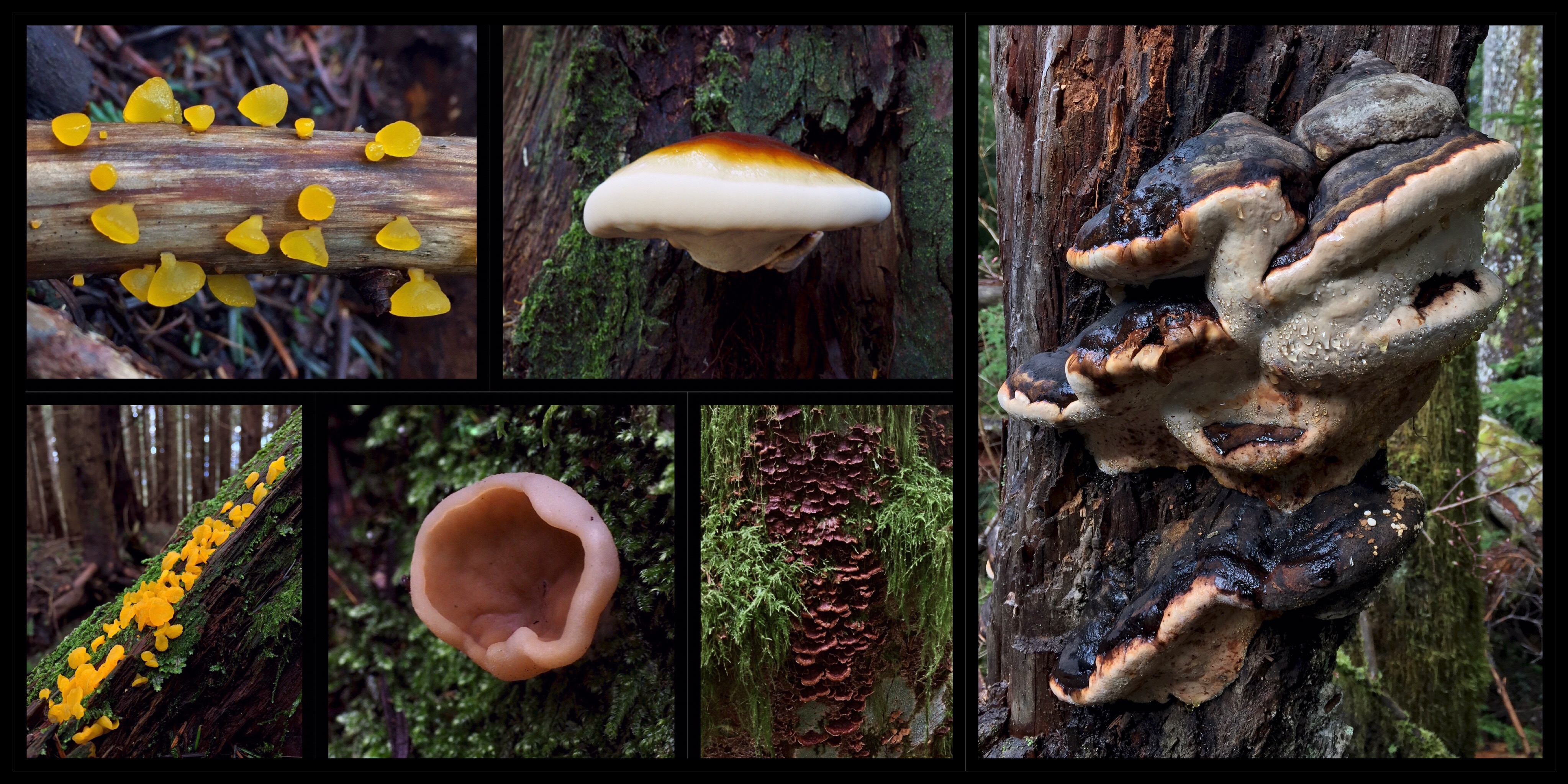 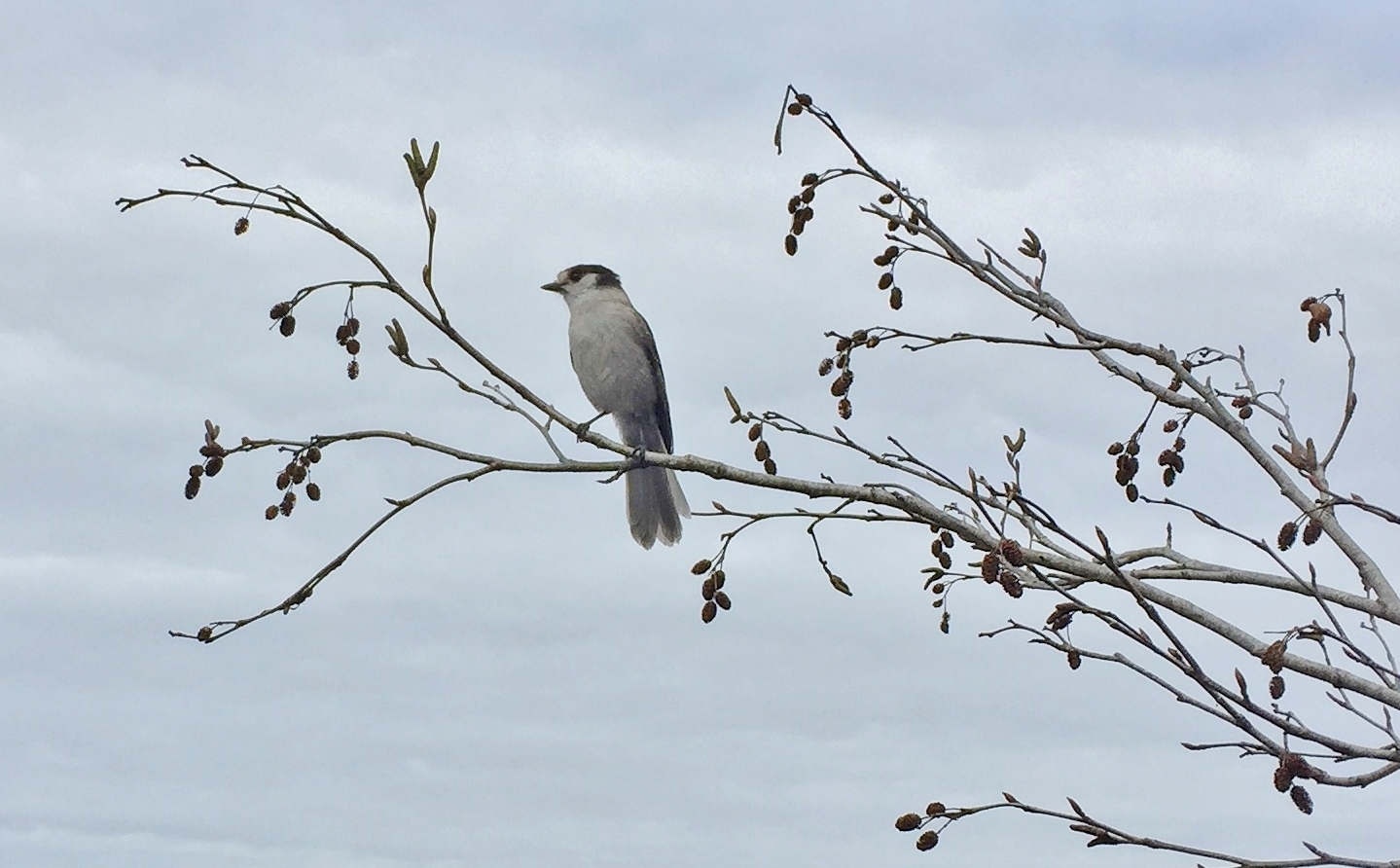 Deceptively mild-mannered in comparison to others of their raucous kindred, Canada jays (Perisoreus canadensis) wait at the mountain’s overlooks to snatch snacks from unwary visitors.
Rattlesnake Mountain Trail, March 26, 2016. 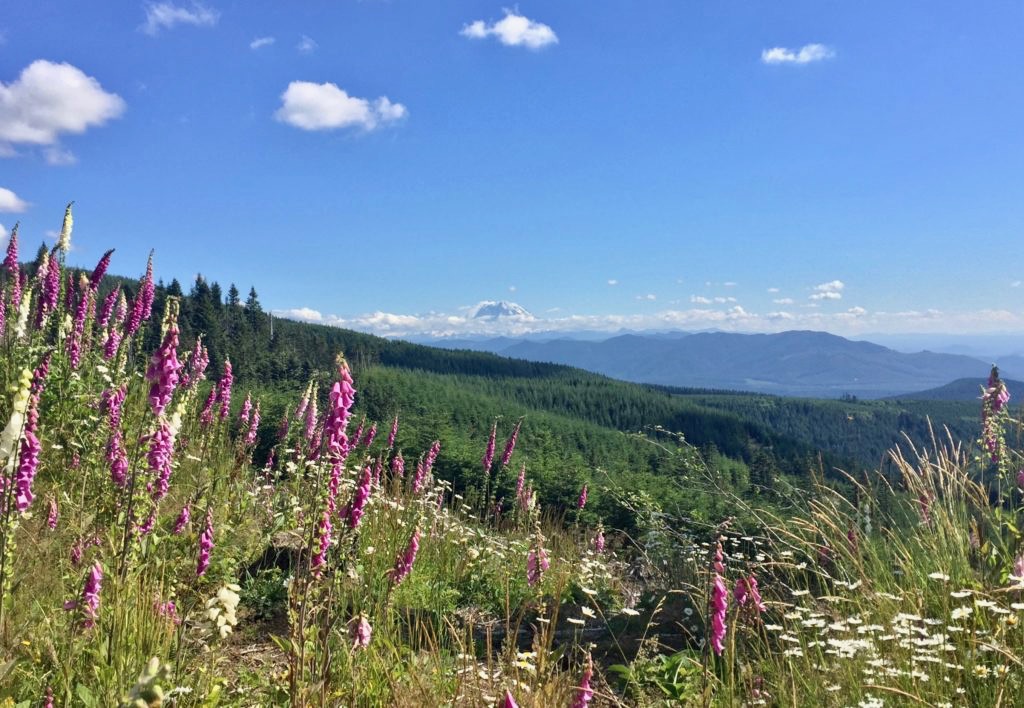 Logging operations in 2016 have marred the landscape between Grand Prospect and East Peak. For most of that distance, the trail has been rerouted onto a gravel logging road through the resulting clear-cut. However unfortunate, the logging has opened expansive southward views that, on a clear day, reach as far as Mt. Rainier. In summer, purple foxgloves (Digitalis purpurea) and oxeye daisies (Leucanthemum vulgare) teem the newly sunlit slope. Rattlesnake Mountain Trail, July 22, 2017.