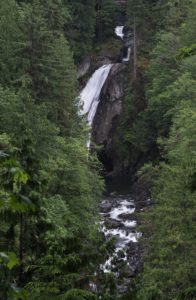 Two and sometimes three of the “Twin” Falls’ several successive descents are visible from a high point downriver on the western route, which likely contributed to their inaccurate name.
Twin Falls Trail (Western Route),
June 18, 2022.

The South Fork Snoqualmie River’s Twin Falls are a set of many in the Pacific Northwest dubbed “Twin Falls.”   In fact, that moniker for these falls is a misnomer, as several separate falls in succession appear around bends in the trail as the South Fork Snoqualmie River bounds through a contorted and deeply hewn gorge before fanning down a cliffside at its surprise finale.  With their low elevation, the trails to the falls are accessible throughout the year and, because they pass through both deciduous and coniferous forest, offer scenery that varies with the season.  The ease of access to the falls also renders them a very popular destination – those seeking a more private viewing may wish to try visiting early in the morning or on a weekday.  (Another benefit of arriving early in the morning or on an overcast day is the more diffuse light available for photographing these unusual waterfalls.)

The Twin Falls are accessed from either of two trailheads and lie near the midpoint of the trail that connects them.  The western trail tracks the South Fork Snoqualmie River from below the falls, while the eastern route from the Homestead Valley trailhead begins on the mixed-use Iron Horse Trail before branching into forest and approaching the falls from above.  The trails provide three overlooks for enjoying different sets of the falls:  a widened spot at the corner of a switchback that views the upper falls, a bridge directly over the middle falls, and a steep, unmarked side trail to two small platforms perched directly over the main falls’ splash pool and gorge.  Be sure to find all three for the full experience.  Also be sure to take appropriate footwear, as both trails also include sections that climb steeply or are narrow, rocky, and muddy.

Those wishing to add some distance to the relatively short jaunt to the falls may choose to hike both sections of the trail from end to end, walk further along the Iron Horse Trail in either direction (the Iron Horse Trail stretches over 100 miles/160 km from Cedar Falls to the Columbia River), or tack on a more robust hike up the trail to the summit of nearby Mount Washington, which departs the Iron Horse Trail a short distance from the Homestead Valley trailhead.

From the western trailhead, the path meanders along the South Fork Snoqualmie River’s boulder-strewn course below the falls.  The lush woodland about the western trail alternates between coniferous and deciduous forest and still includes a few old-growth giants.  Shielded from the noise of nearby Interstate 90 until just before it reaches the falls, the western trail offers a bit of riverine tranquility. 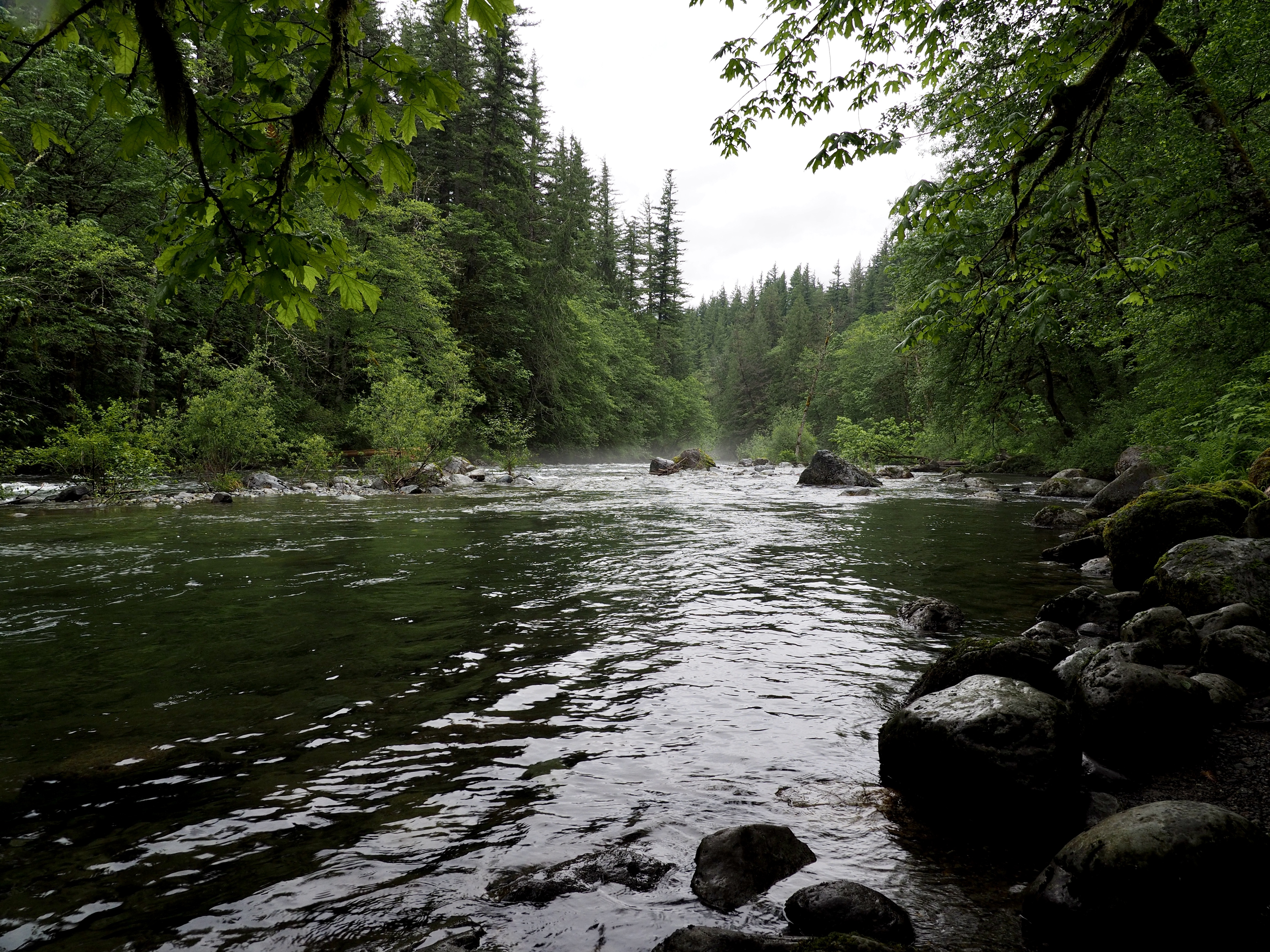 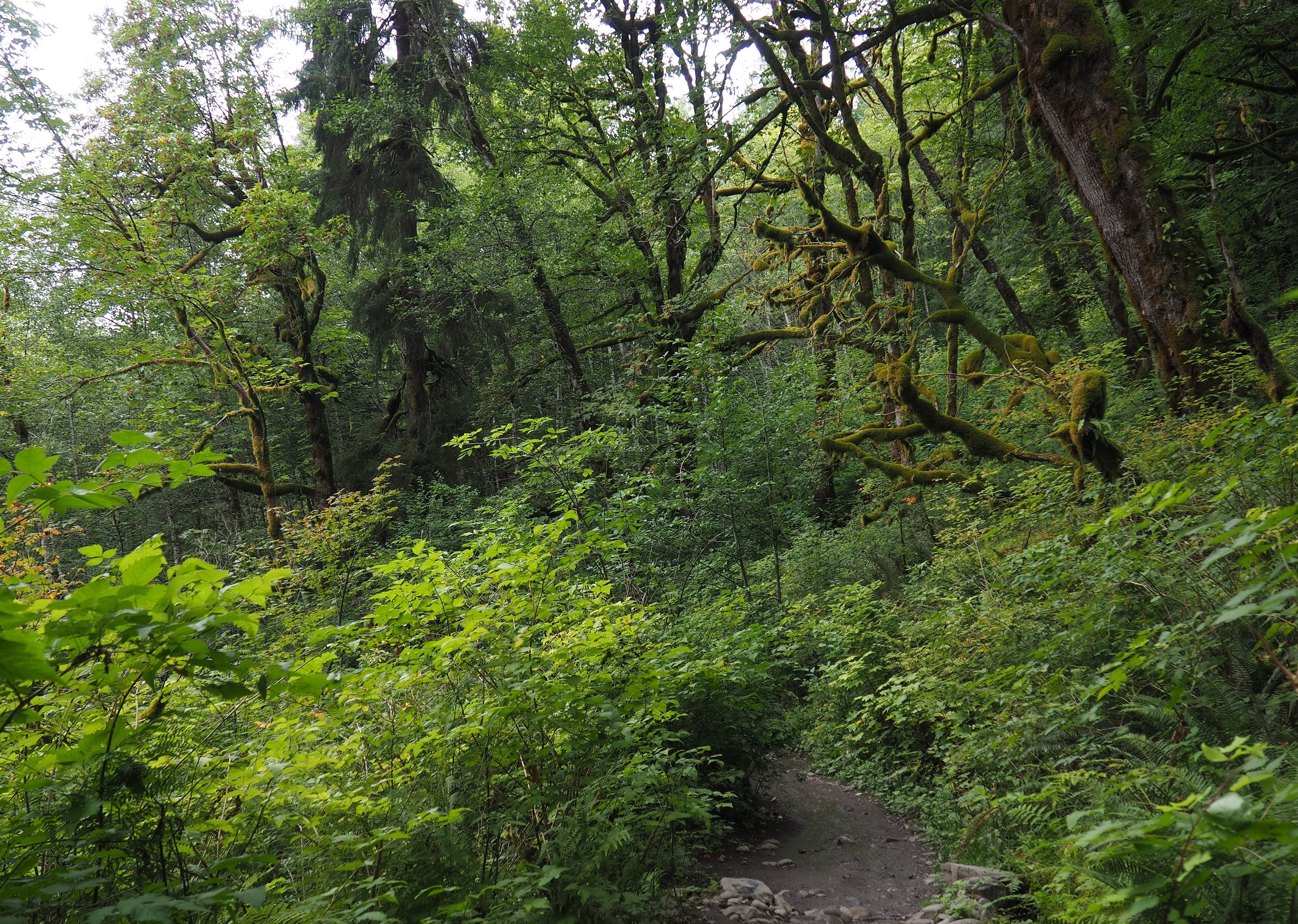 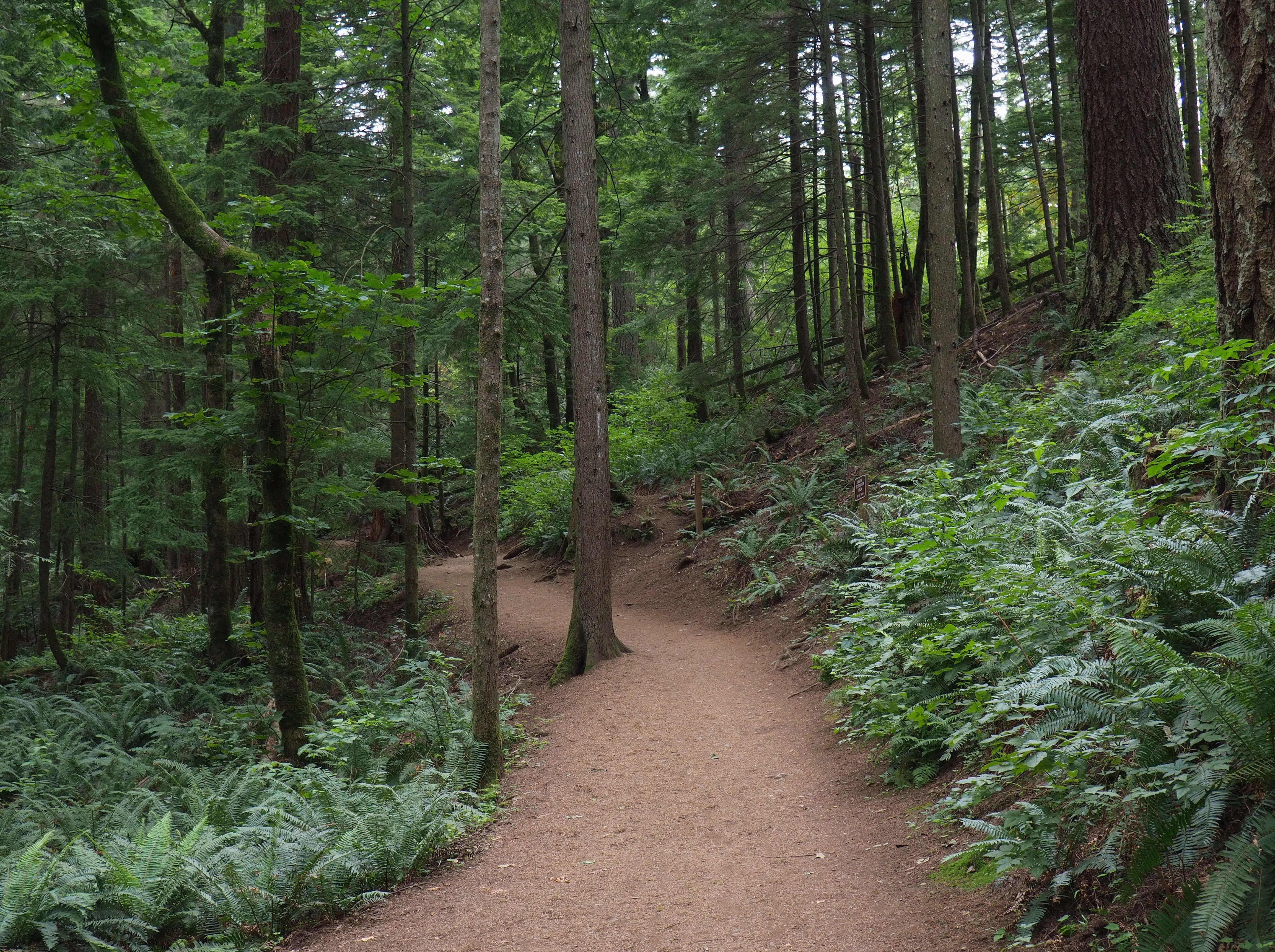 As both the western and eastern trails climb to their junction near the falls, they enter fern-floored, mostly coniferous forest. Twin Falls Trail (Western Route), August 07, 2016.

The falls’ eastern access from the Homestead Valley trailhead offers a diversion for those enjoying the Iron Horse Trail, the former route of the old Chicago, Milwaukee, St. Paul and Pacific Railroad between Chicago, Illinois and Tacoma, Washington and now a wide gravel path popular with local walkers, runners, and cyclists.  Throughout the spring and summer, wildflowers line the Iron Horse Trail before the falls’ eastern trail ducks into dense woodland.  The Homestead Valley route also provides a bit of anticipation, as it approaches the falls from above, leaving the grandest view of the falls’ final descent for last.  Given the eastern trail’s proximity to Interstate 90, the whir of traffic is ever present until drowned in the rush of cascading waters at the trail’s end.

The nondescript spur road and Iron Horse Trail, strung with power lines above, are nevertheless lined with lush foliage and wildflowers in the spring and summer months.
Twin Falls Trail (Homestead Valley Route), May 25, 2015. 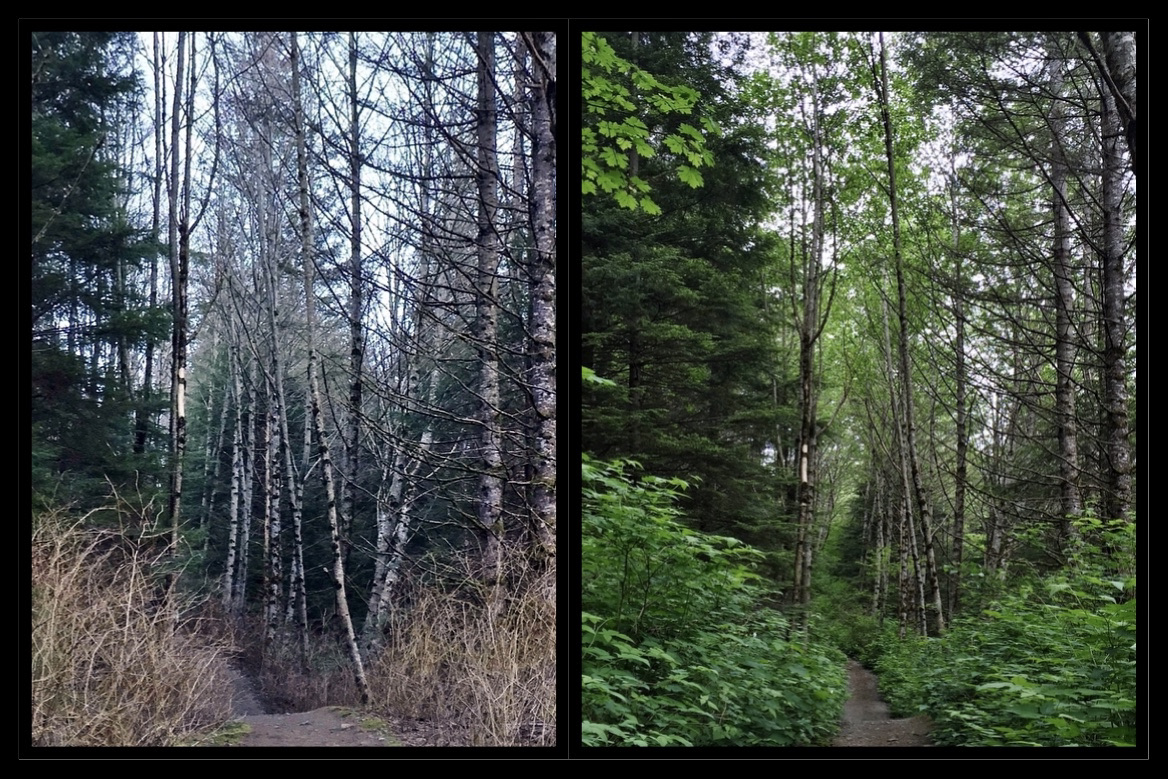 Seasons bring great variation to the mixed forest along the trail. In the sparing depths of winter, the woodland is reduced to its stark essentials (left), in contrast to spring’s largesse merely months later, when the same seemingly desolate forest is transformed into a burgeoning greenwood (right). During the somber winter months, enjoy the sharp contrast of red alders’ (Alnus rubra) speckled white bark against the surrounding forest gloom.
Twin Falls Trail (Homestead Valley Route), March 08 and May 25, 2015. 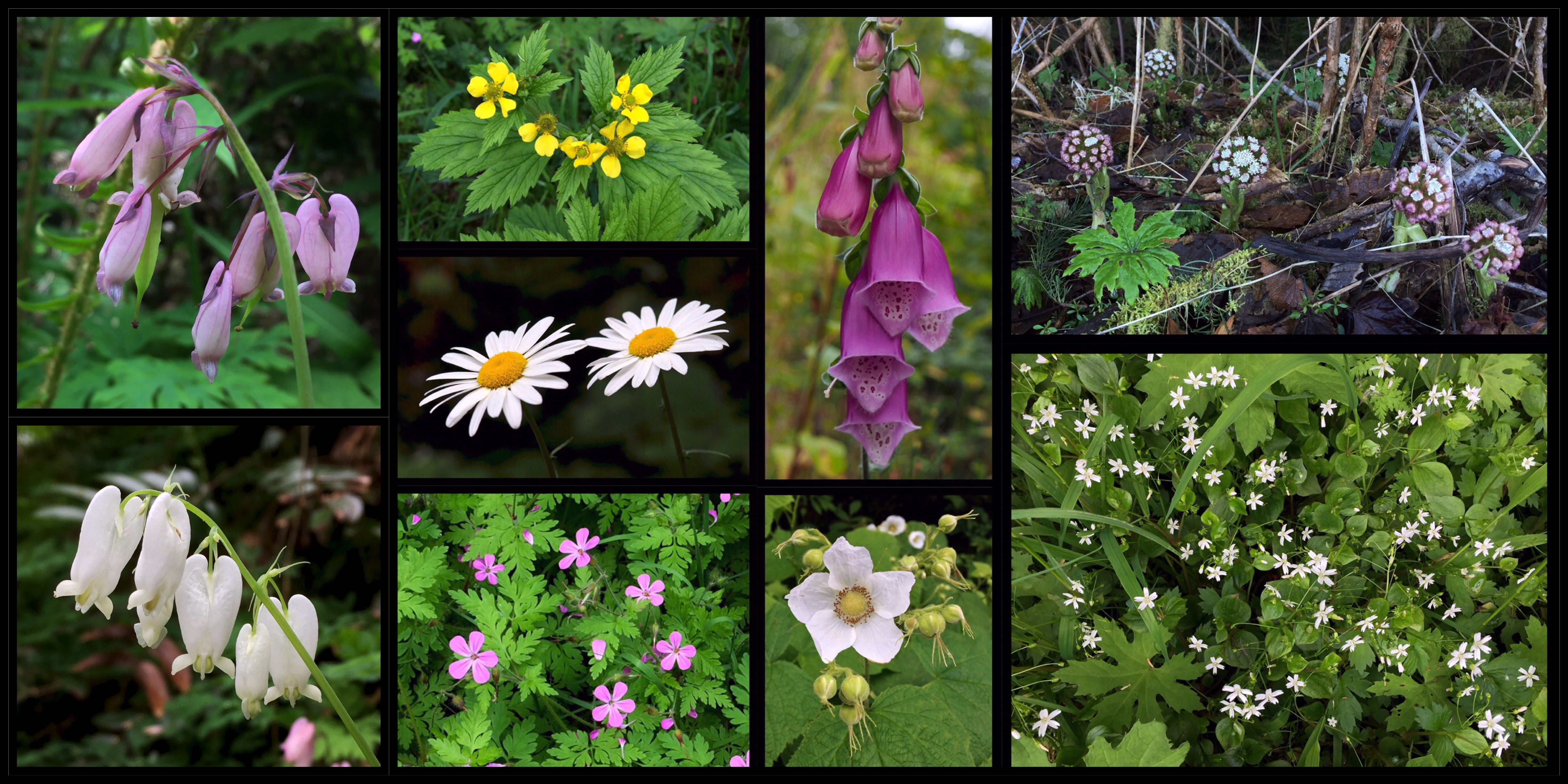 Peer downward from the footbridge — if you can — for a bird’s-eye view of yet another small falls. Twin Falls Trail (Homestead Valley Route), May 25, 2015. From the footbridge, the view sweeps down the gorge and across the riverbed below, offering little hint of the spectacle yet to come. A short distance beyond, at the western and eastern trails’ junction approximately halfway between the two trailheads, an unmarked side trail descends to the final and largest of the falls. Stairs and railings aid hikers in safely negotiating the terrain about the falls, although some are quite steep and sometimes eroded from heavy use.
Twin Falls Trail, May 25, 2015 and August 07, 2016. Within only steps of the lookout platform at the side trail’s end does the river’s final and dramatic plunge come into view. The river descends, by varying estimates, 135 to 150 feet/41 to 46 meters over the last falls, displaying classic “horsetail” form as it splays in individual rivulets across the cliff’s vaulted face. The falls empty into a narrow and deeply eroded amphitheater-style basin directly beneath the viewing platform. Twin Falls Trail, July 01, 2021.