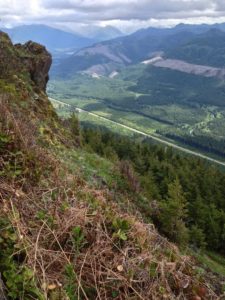 “Kloshe Nanitch” means “to stand guard” or “to keep a good look out” in the Chinook jargon, a pidgin amalgamation of French, English, and Pacific Northwest First Nations languages that was prevalent in the 19th and 20th centuries among local European and indigenous peoples (and not to be confused with the now extinct language of Oregon’s Chinook people).  In keeping with its name, the trail’s destination is the remnant of a fire lookout perched atop Snider Ridge with impressive views of the Sol Duc River Valley below and the Olympic Mountains beyond.  The trail climbs at first moderately and then steeply through airy coniferous forest delicately laced with vine maple, only breaking into open air in its final approach to the lookout.  Spring and summer wildflowers dot the shady woodland, becoming much more prolific in the sunny summit clearings.  From Kloshe Nanitch, a short loop trail leads to the ridge’s North Point, with similar views, as well as the junction with the Snider Ridge Trail to Mount Muller, some 3.00 miles/4.80 km distant.  Although it never quite loses the distant bustle of trucks trundling down nearby Highway 101, the little-used trail does offer a bit of solitude.  Upon reaching the lookout, one may be surprised to learn that it can also be reached by a rough Forest Service road. 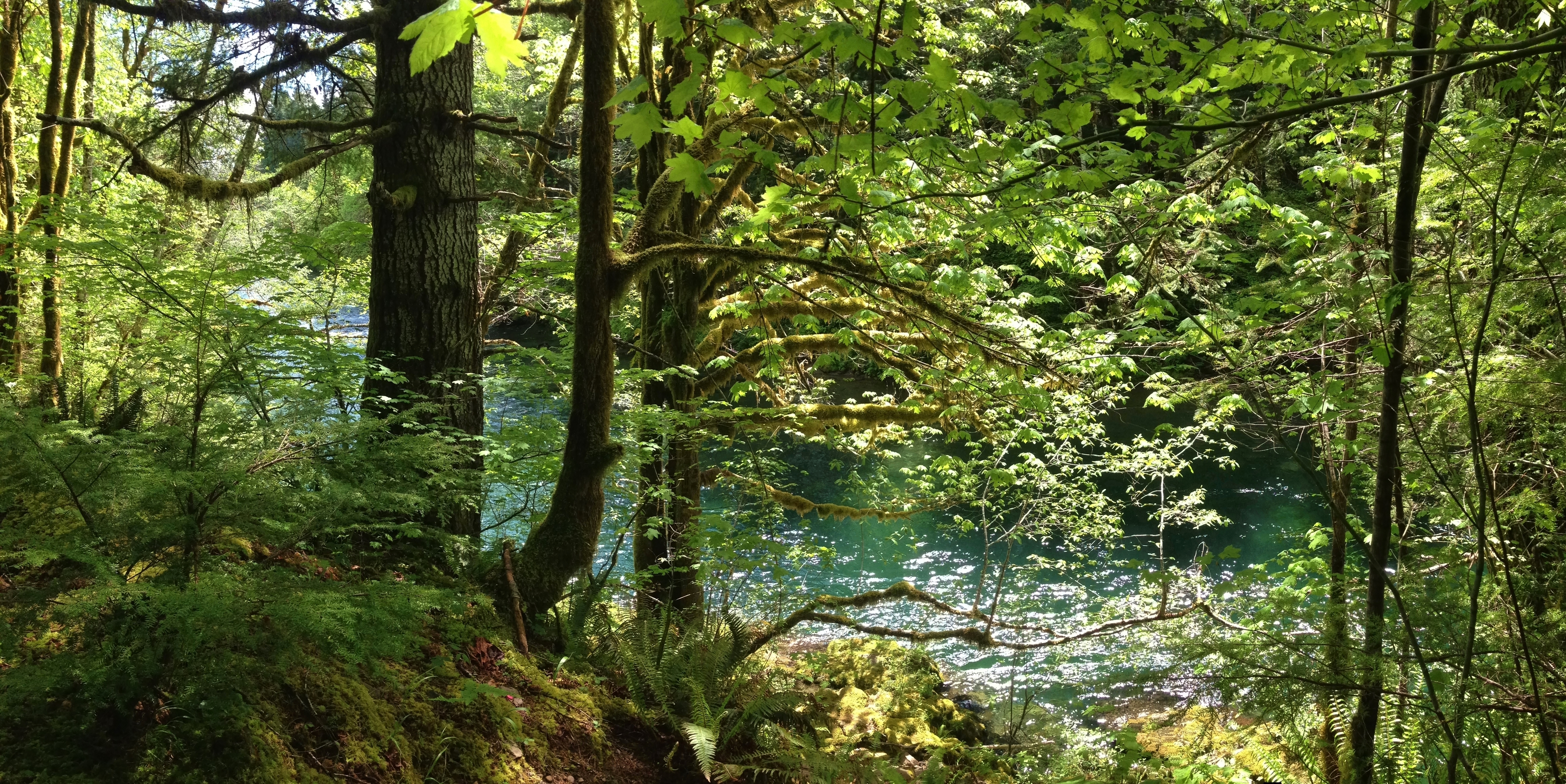 One of the Sol Duc River’s many serpentine curves meanders just beyond the forest fringe shortly before the road reduces to a trail that turns north up the mountainside.
Kloshe Nanitch Trail, May 19, 2014. Several small streams cross the trail, but are easily traversed in one or two skips. Approximately halfway up the trail, look for one spring-born stream bursting directly from the mountainside just below the trail. Kloshe Nanitch Trail, May 19, 2014. 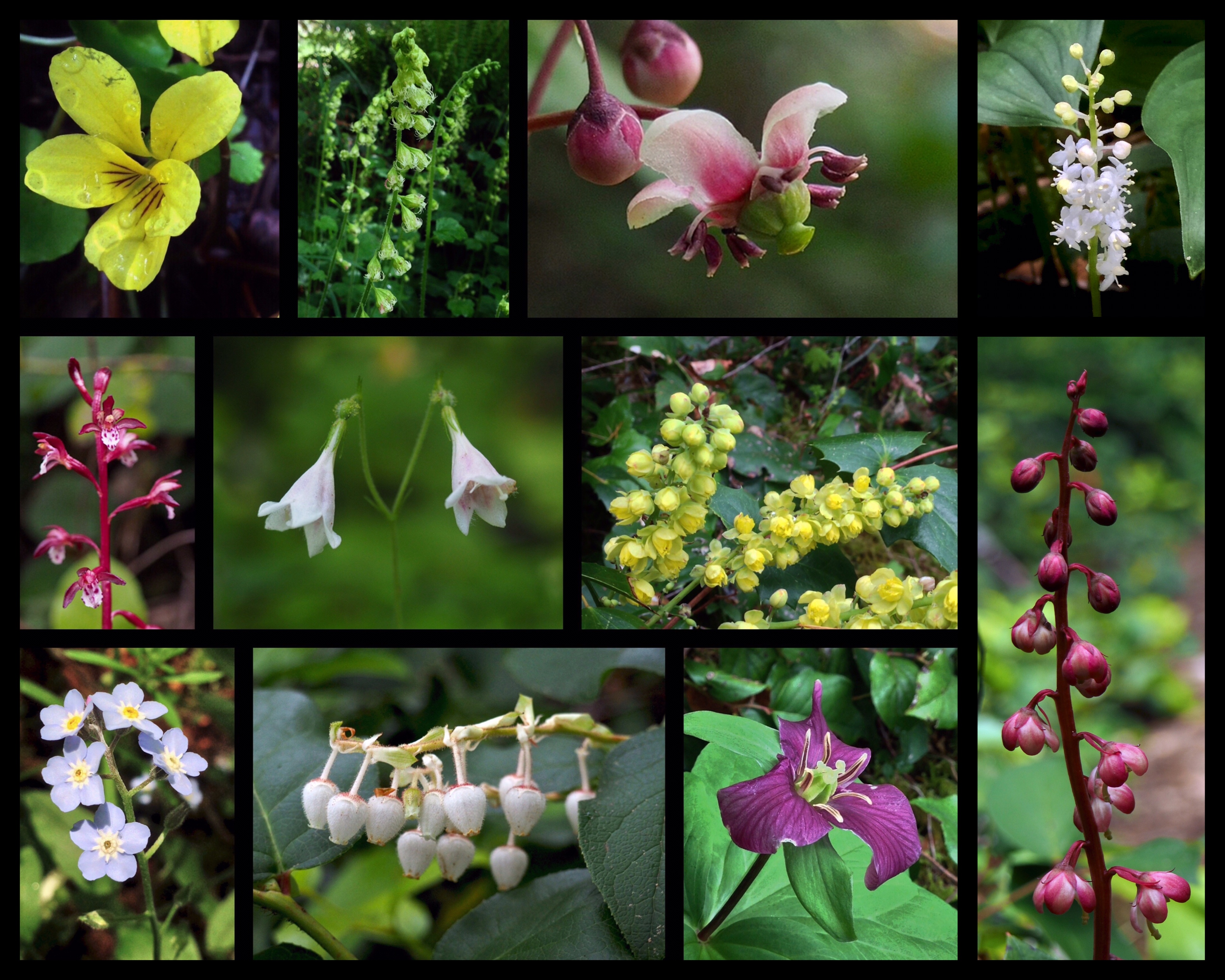 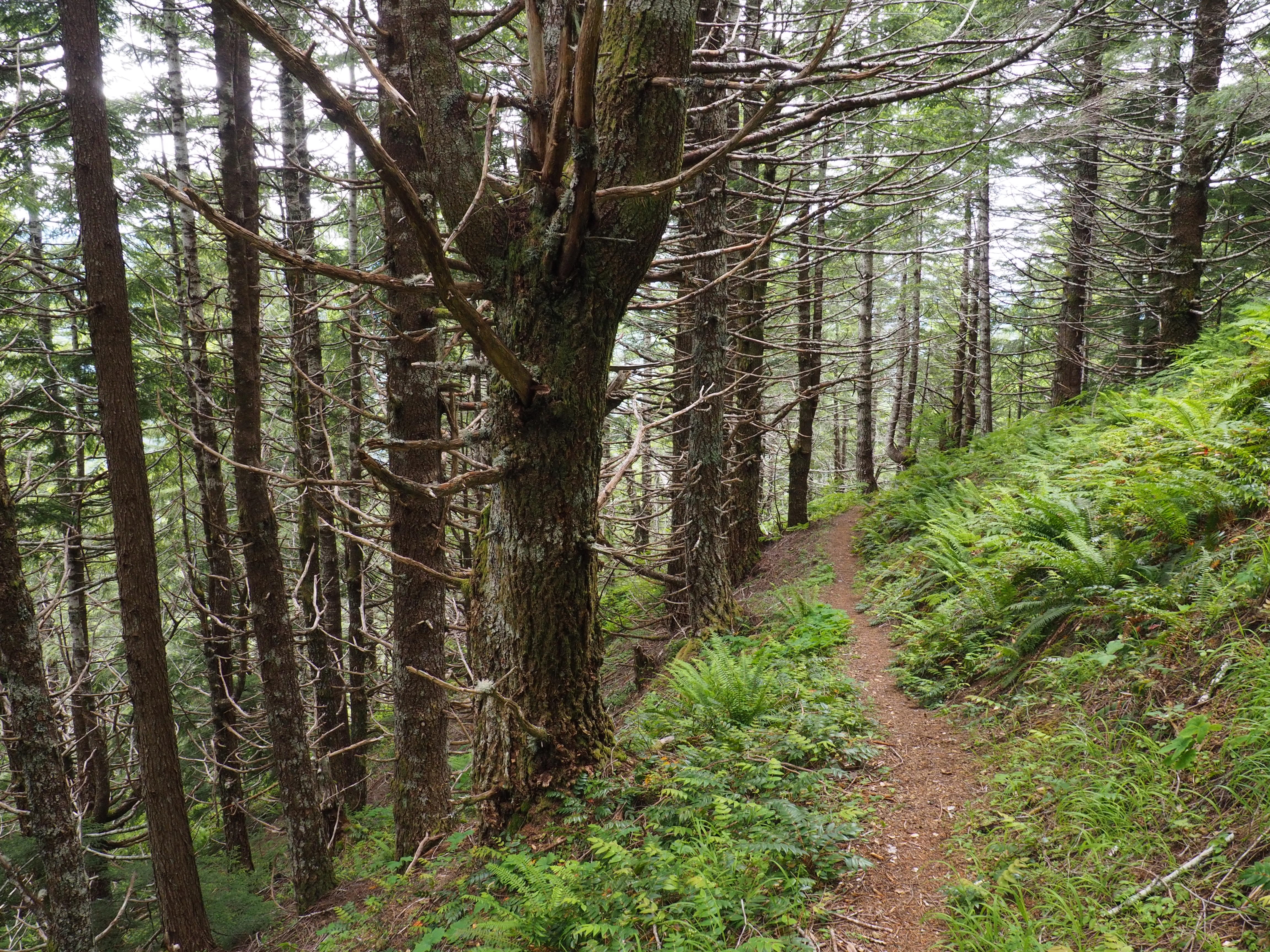 In contrast with their smooth, lower elevation neighbors, conifers along the ridgetop bristle with branch stubs like so many fishbones stood on end. Kloshe Nanitch Trail, June 17, 2016. Near the summit, southward views begin to open toward the cloud-shrouded Olympics.
Kloshe Nanitch Trail, May 19, 2014. 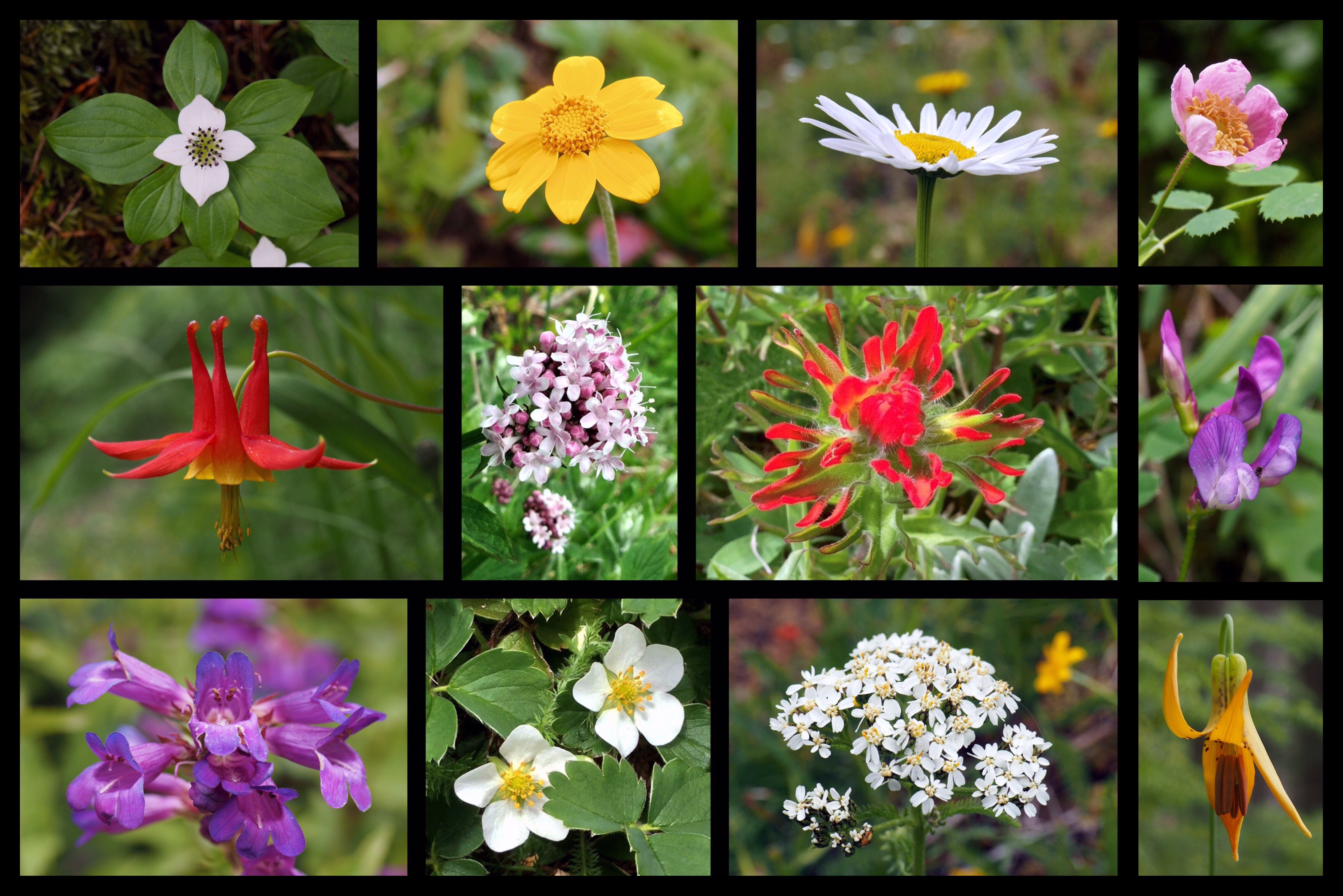 In the lookout’s eastern view, Lake Crescent lies cradled in its mountain fold. Mount Muller lies midway down the ridge on the left and can be reached by taking the Snider Ridge Trail from the North Point Loop that begins just below Kloshe Nanitch. Kloshe Nanitch Trail, June 17, 2016. The Olympic Mountains, often veiled in rain, rise beyond a succession of ridges to the southeast, the nearest of which, Bigler Mountain, bears the fresh wound of a recent clear-cut across its flanks.
Kloshe Nanitch Trail, May 19, 2014. Below the lookout, the Sol Duc River Valley stretches away to the Pacific Ocean, which, on a clear day, lines the southwestern horizon. Kloshe Nanitch Trail, June 17, 2016. 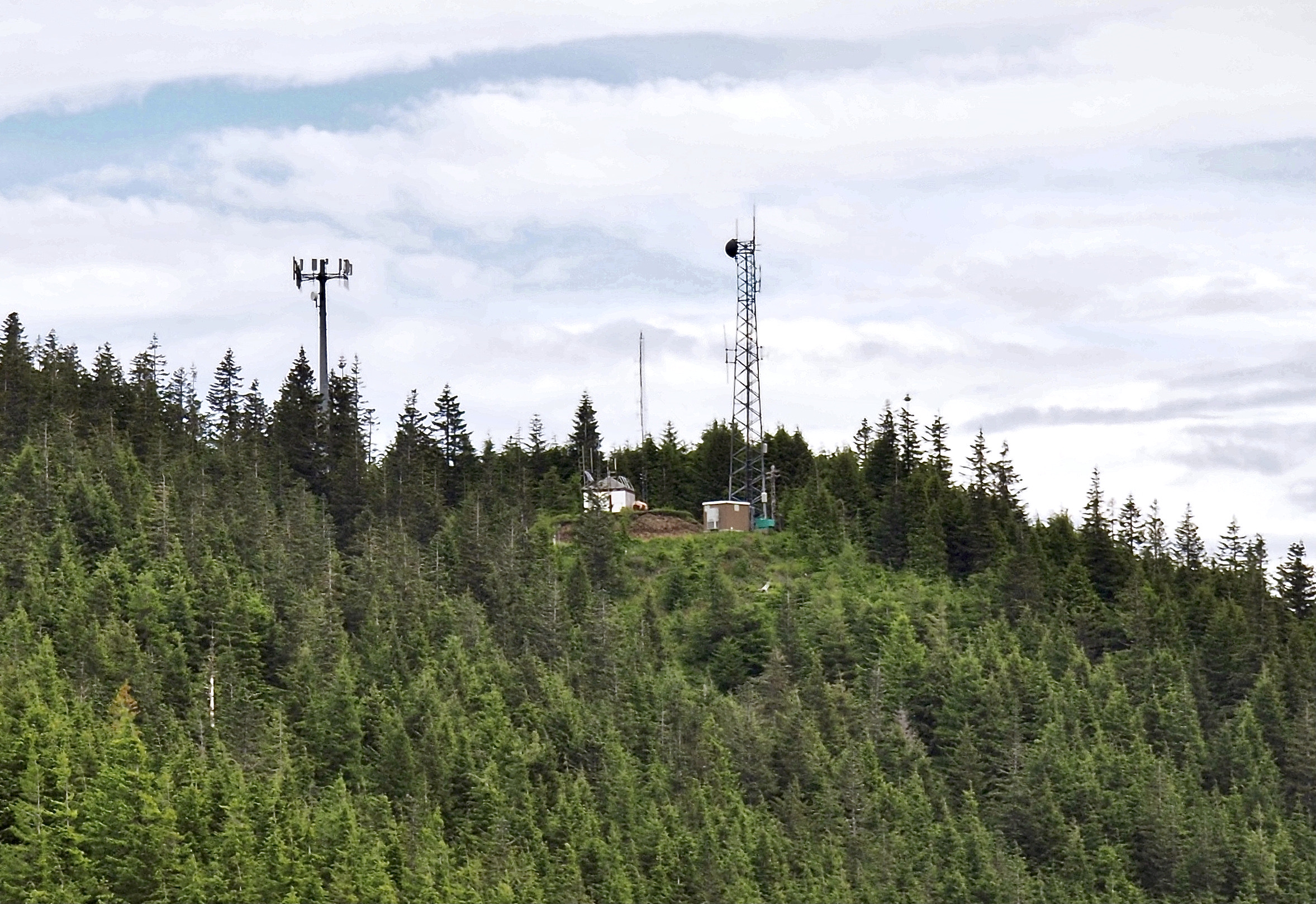 For much of its distance, the North Point Loop snakes through dank barrens beneath the unthinned new forest that bristles from the ridgetop. Between rocky escarpments, it affords partial views of the Sol Duc River Valley below, similar to the sweeping views from the Kloshe Nanitch lookout. In addition to the other wildflowers already encountered, look for arctic sweet coltsfoot (Petasites frigidus) (lower center) and spreading phlox (Phlox diffusa) (lower right) where sunlight brightens forest clearings. North Point Loop, Kloshe Nanitch Trail, May 19, 2014.

At approximately 1.20 miles/2.00 km from the main trail, the loop trail abruptly merges with a road just beyond sight of the North Point. Upon turning right up the road, the point’s various towers come quickly into view. Although limited, the view from the North Point is similar to that from Kloshe Nanitch, which is barley visible perched on the mountainside beyond (here, to the far right). To complete the loop, turn back down the road and continue past the loop trail’s junction with the road just 0.30 miles/0.50 km to Kloshe Nanitch. North Point Loop, Kloshe Nanitch Trail, June 17, 2016.