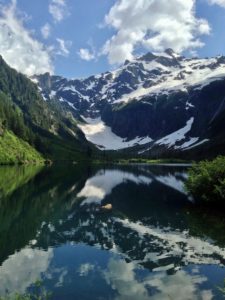 The trails along Elliot Creek (spelt “Elliott” on some maps) to Goat Lake offer much to commend themselves:  delicate, yet striking deciduous forest, a large grove of old-growth conifers approaching the size of redwoods, a series of thundering waterfalls, a jewel-hued lake set against a snowy peak, and a bit of local history.  During the summer, an array of shade-loving wildflowers and ferns abounds throughout the forested trailside.  In the lake basin’s sunny clearings, the demure woodland blooms give way to showy displays of their more exuberant floral neighbors.

Approximately 0.25 miles/0.40 km from the trailhead, the trail forks into the Upper and Lower Elliot trails, which rejoin approximately 4.30 miles/6.90 km from the trailhead and continue on as the Goat Lake Trail.  The Upper Elliot Trail follows an old mining road and is thus broad and flat with little incline.  The Lower Elliot Trail drops down to Elliot Creek, which it follows a bit before climbing to rejoin its counterpart.  Each trail is worth exploring and hikers often take one trail on the way to Goat Lake and the other on the return.  Those wishing a shorter, tranquil stroll through deep alder forest may hike the Upper and Lower Elliot trails as a loop.

The lake is a popular, yet not crowded, weekend hiking and camping destination.  Expect to encounter others scattered along the lakeside or, perhaps, visit on a week day for a little more solitude.

Goat Lake is named in English for the mountain goats that can sometimes be seen on the surrounding peaks, although its historic Native American Sauk-Suiattle name is “Sweetleehachu.” The mountain goats are culturally significant to the Sauk-Suiattle and, in former times, were important sources of food and clothing to them. 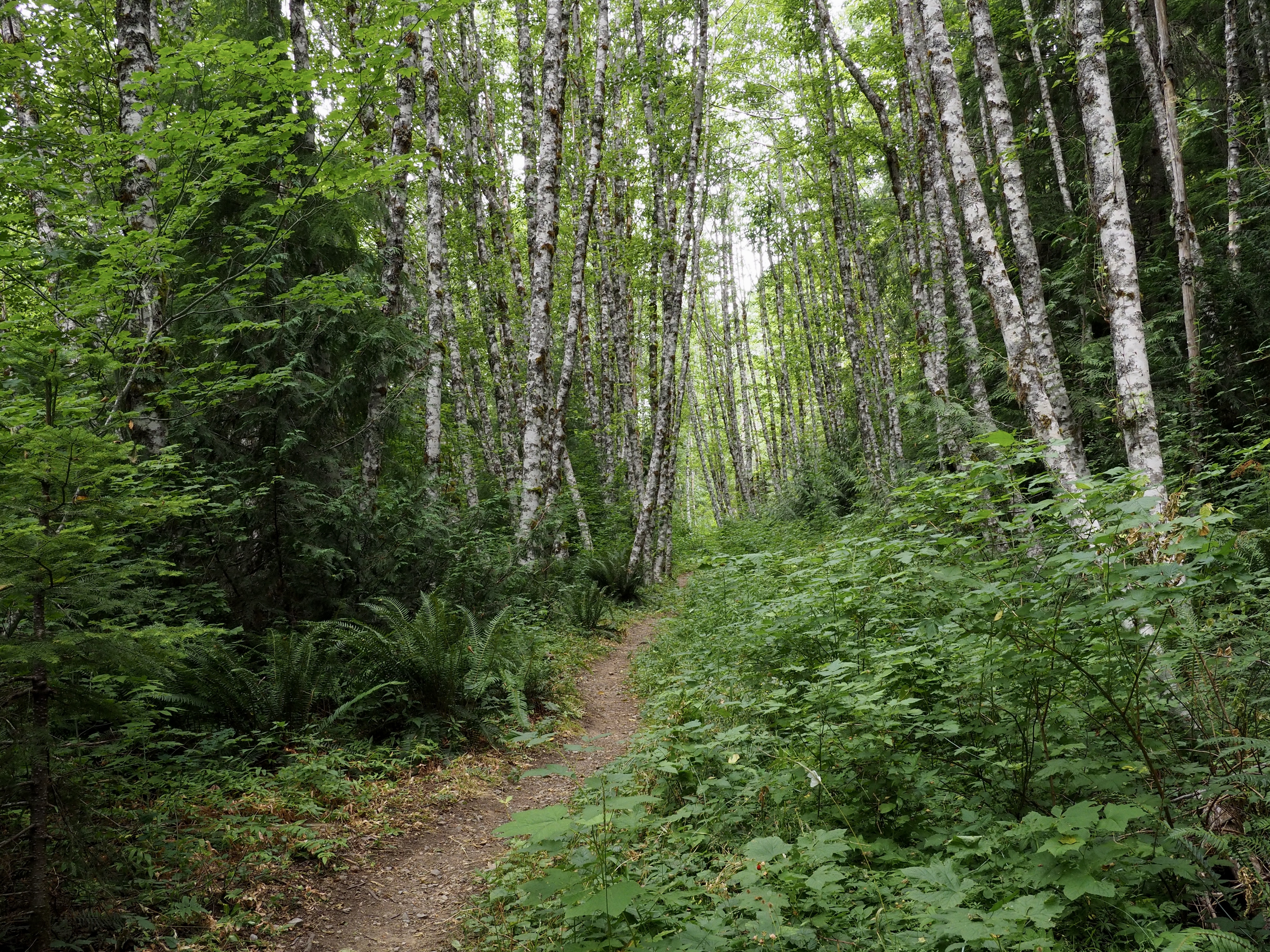 Slender, arched trunks of red alder (Alnus rubra) form airy corridors about the Upper and Lower Elliot trails. Cousin of the birch, the red alder is clad in similarly smooth, white bark speckled with grey and black. It takes its name from the bright red color its inner bark turns when wounded, similar to the oxidation of an apple when cut. Upper Elliot Trail, August 13, 2022. 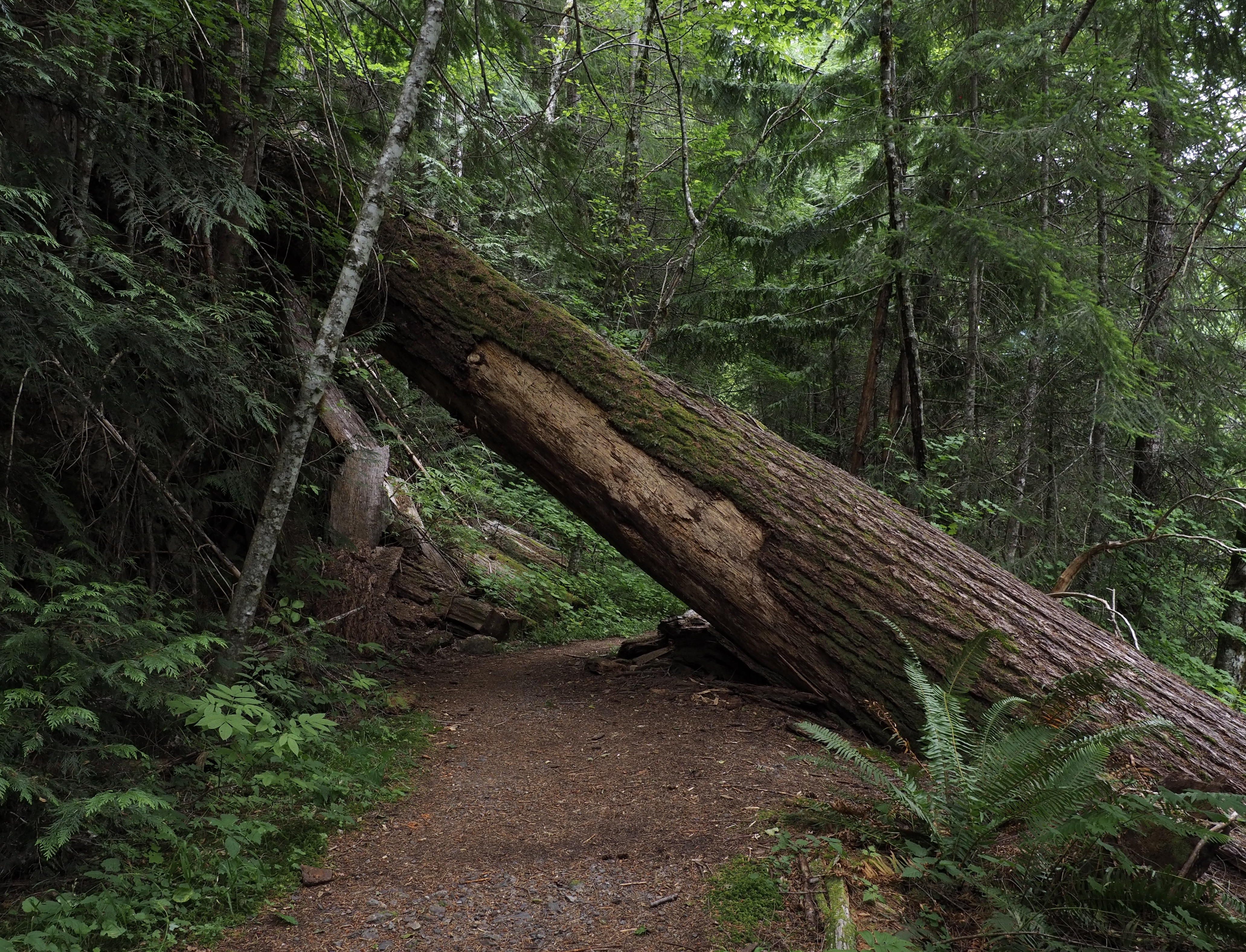 Both the Upper and Lower Elliot trails duck beneath reposing giants, which are passed with little effort by stooping or straddling. Upper Elliot Trail, August 13, 2022. Shortly after the Upper and Lower Elliot trails rejoin, the path continues into mostly evergreen forest, where massive, old-growth western redcedars (Thuja plicata) abound. Unrelated to true cedars, western redcedars and their kin are actually cypresses misnamed as “cedars” because of their similarly aromatic, rot-resistant wood. As cypresses, western redcedars are characterized by broad, buttressed bases – some approaching the girth of redwoods – that taper quickly as they rise.
Goat Lake Trail, August 13, 2022. 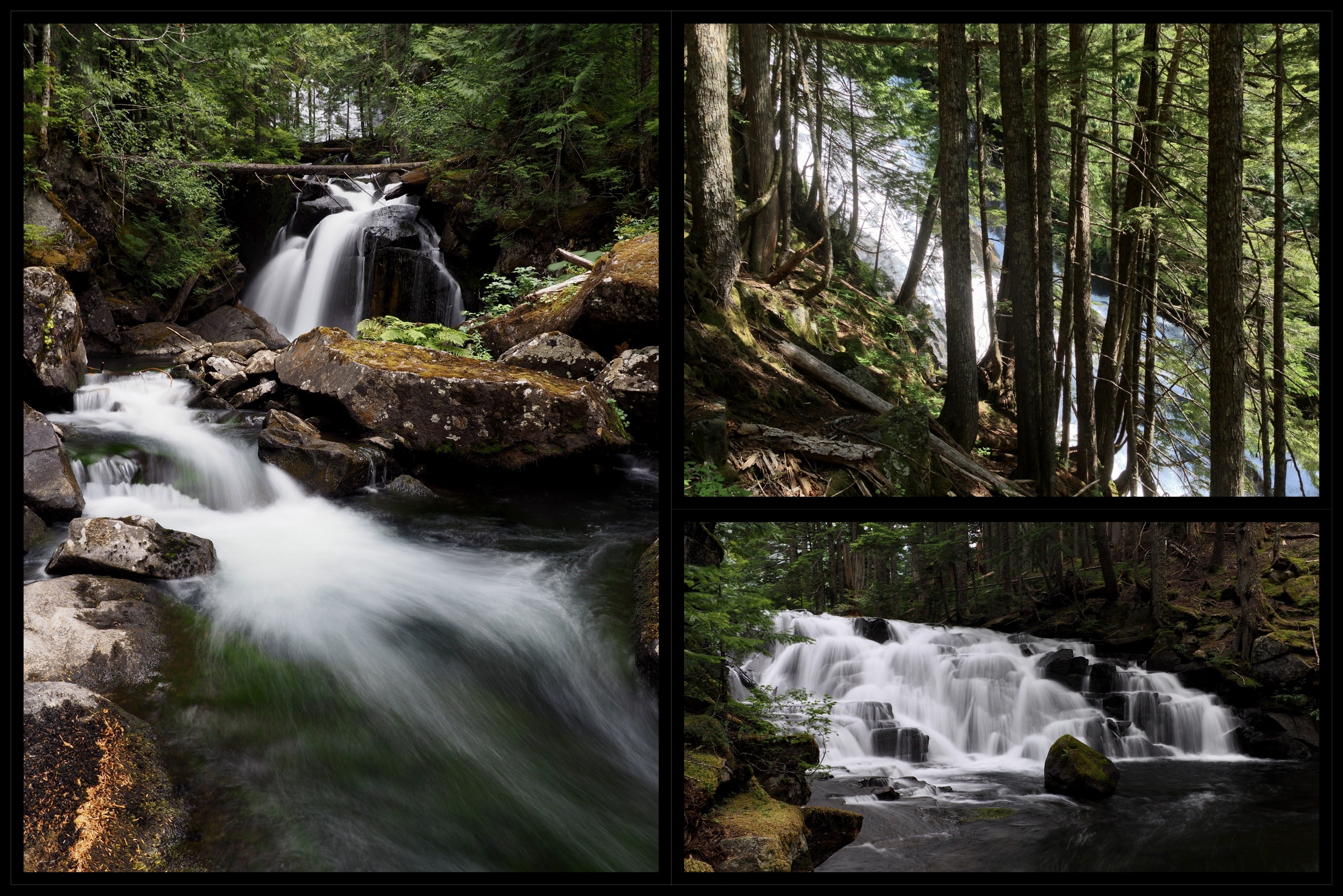 At approximately 6.00 miles/9.70km from the trailhead, the trail begins switchbacking along Mackintosh Falls‘ massive stairstepped cascades. Here, Elliot Creek plunges 266 feet/81 meters in several distinct sections, although not all are visible. Pictured here are one of the lower and most easily accessible secions (left), a portion of the central chute (upper right), and the first drop near the creek’s exit from Goat Lake (lower right). The scale and power of the falls thundering just beyond the forest fringe is awe inspiring. The trail’s long switchbacks provide almost 0.50 miles/0.80 km of intermittent waterfall viewing. Boot paths lead from the main trail to the torrents’ very edge, but exercise caution when approaching the brink.
Goat Lake Trail, July 12, 2014 and August 13, 2022. 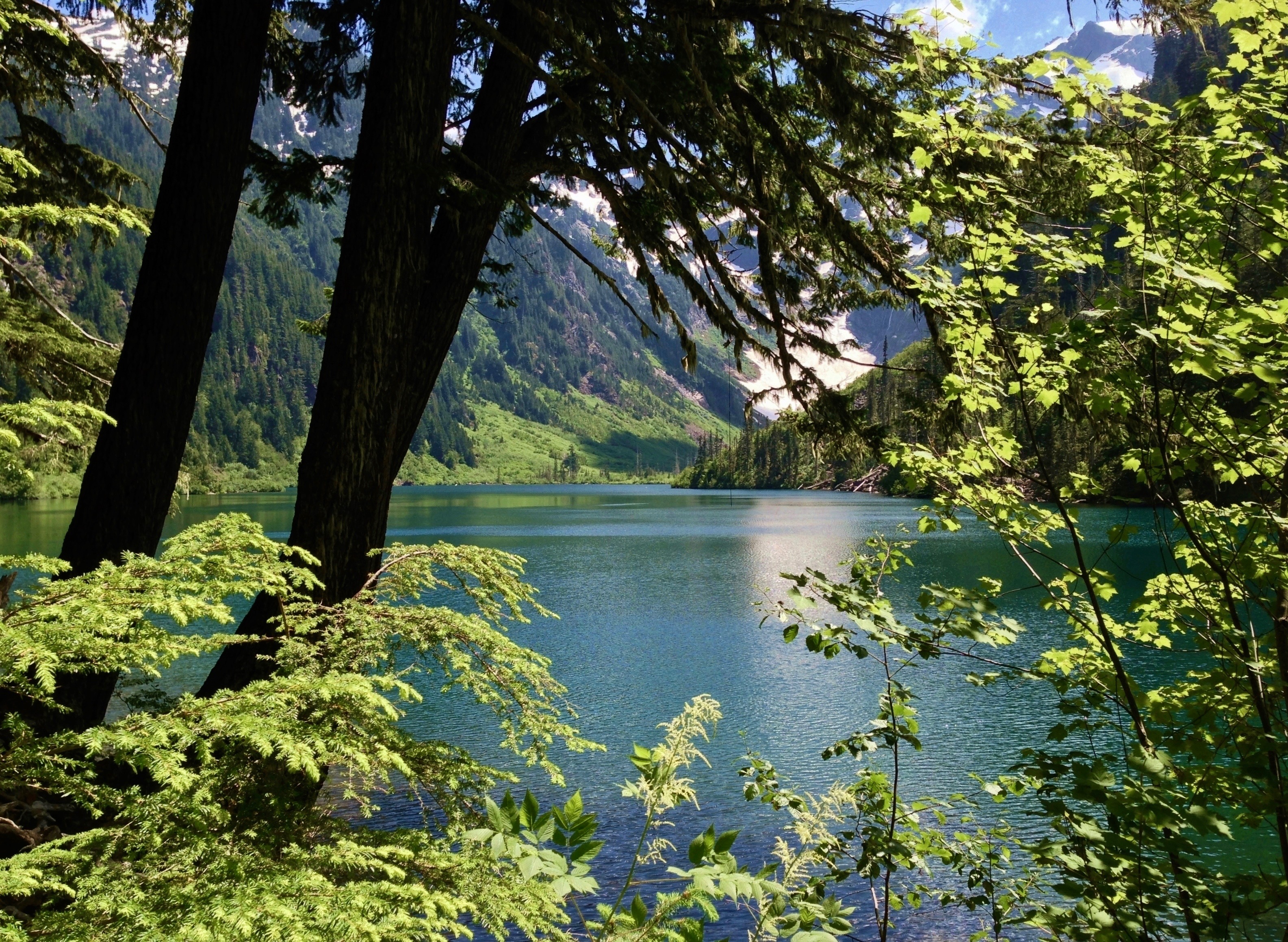 Around a long bend in the trail, Goat Lake gradually comes into view in crayon-bright shades somewhere between teal and cerulean. Goat Lake Trail, July 06, 2013. 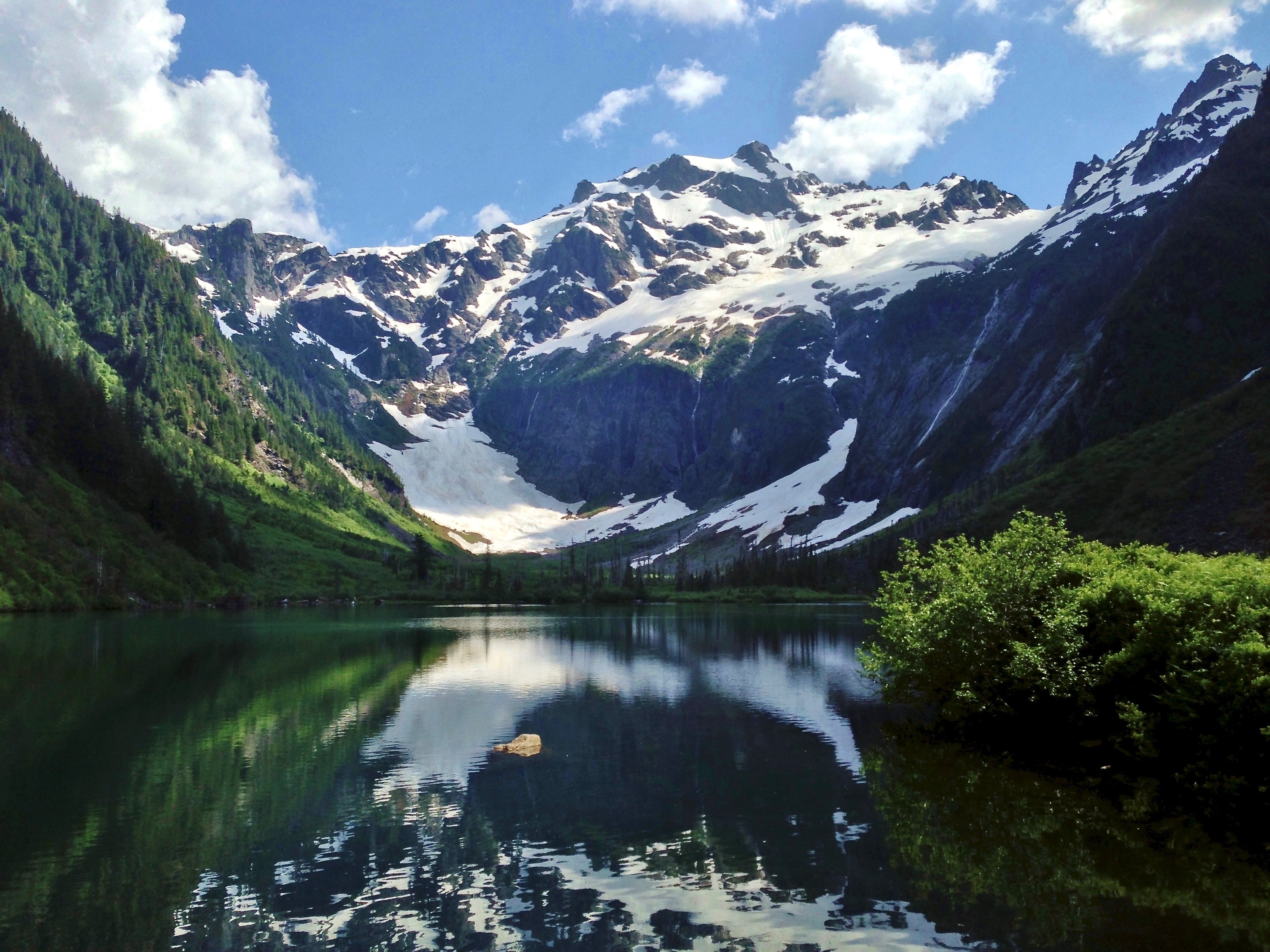 The trail leads to the tip of a point on the eastern lakeshore that affords a direct view of Cadet Peak. Around 1900, several mines were dug into the peak, which takes its name from the Cadet Mine on its opposite side. The Foggy Mine was bored approximately 1,000 feet/305 meters into the peak’s northeast face, just above the large snowfield at the lower left of the peak in this photo. Nine minerals are known to have been extracted from the Foggy Mine, although none in large quantities.
Goat Lake Trail, July 06, 2013. 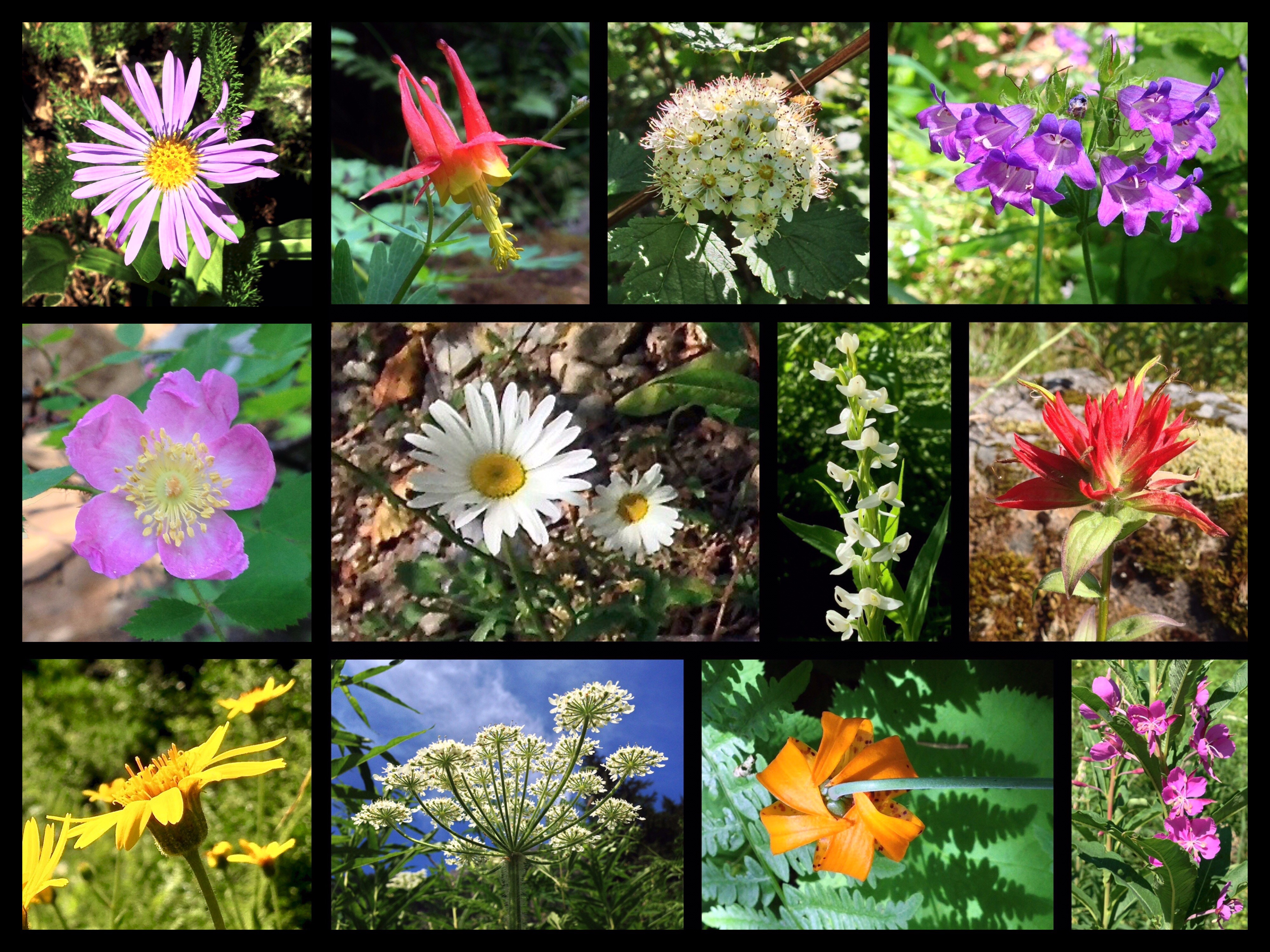 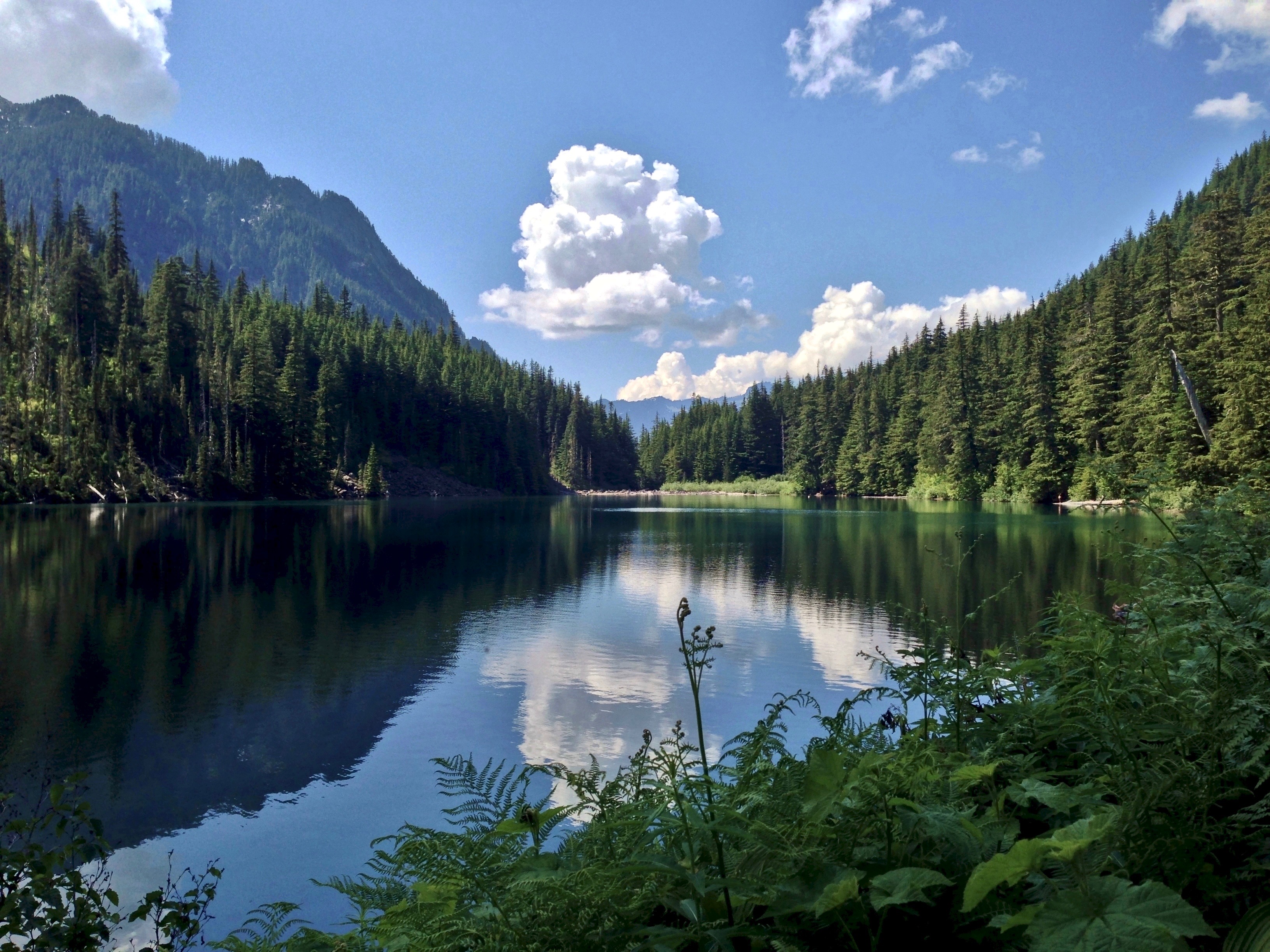 The return trek toward the lake’s outlet and the descending trail beyond provides a placid vista of its own. Goat Lake Trail, July 06, 2013.