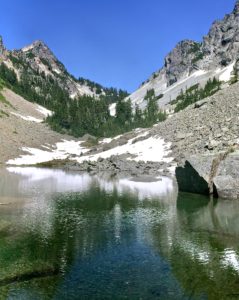 The rugged trail to Melakwa and Upper Melakwa lakes generally follows Denny Creek through pleasant, mostly coniferous forest, past waterfalls, along a canyon rim, across sprawling boulderfields, and finally ends where the lakes nestle high in their narrow alpine cradle.  Here and there, wildflowers dot the stone-strewn trailside and flourish in mid-summer swaths along the lakeshores.  The trail gradually climbs the creek valley before steeply ascending Hemlock Pass at its head and then generally descending the ridge’s undulating flank to the lakes just beyond.  Near the lakes, those wishing to venture still further can pick up connecting trails to Melakwa Pass, Lower Tuscohatchie Lake, and Pratt Lake.

Do note that this trail is rocky throughout and steep in its mid-section — be prepared with appropriate footwear and other traction gear as required for your comfort.  Expect wet feet where the trail crosses Denny Creek at the expanse of smooth rock known as the Slippery Slab 1.25 miles/2.00 km from the trailhead and be ready to turn back if seasonal high water or ice render it too dangerous to safely pass.  Above Keekwulee Falls, exercise caution where the trail skirts the canyon rim just steps from the tree-lined precipice.  Finally, expect to encounter other hikers on summer weekends; for more solitude, try visiting on a weekday or take the longer Melakwa – Pratt Lake Traverse via Pratt and Lower Tuscohatchie lakes.

Several natural features along the trail derive their names from the Chinook jargon, a pidgin amalgamation of French, English, and Pacific Northwest First Nations languages that was prevalent in the 19th and 20th centuries among the various local European and indigenous peoples (and not to be confused with the now extinct language of Oregon’s Chinook people).  In the jargon, “melakwa” means “mosquito.” For most of its distance, the trail traces Denny Creek to its headwaters at Hemlock Pass.
Denny Creek – Melakwa Lake Trail, July 02, 2017. 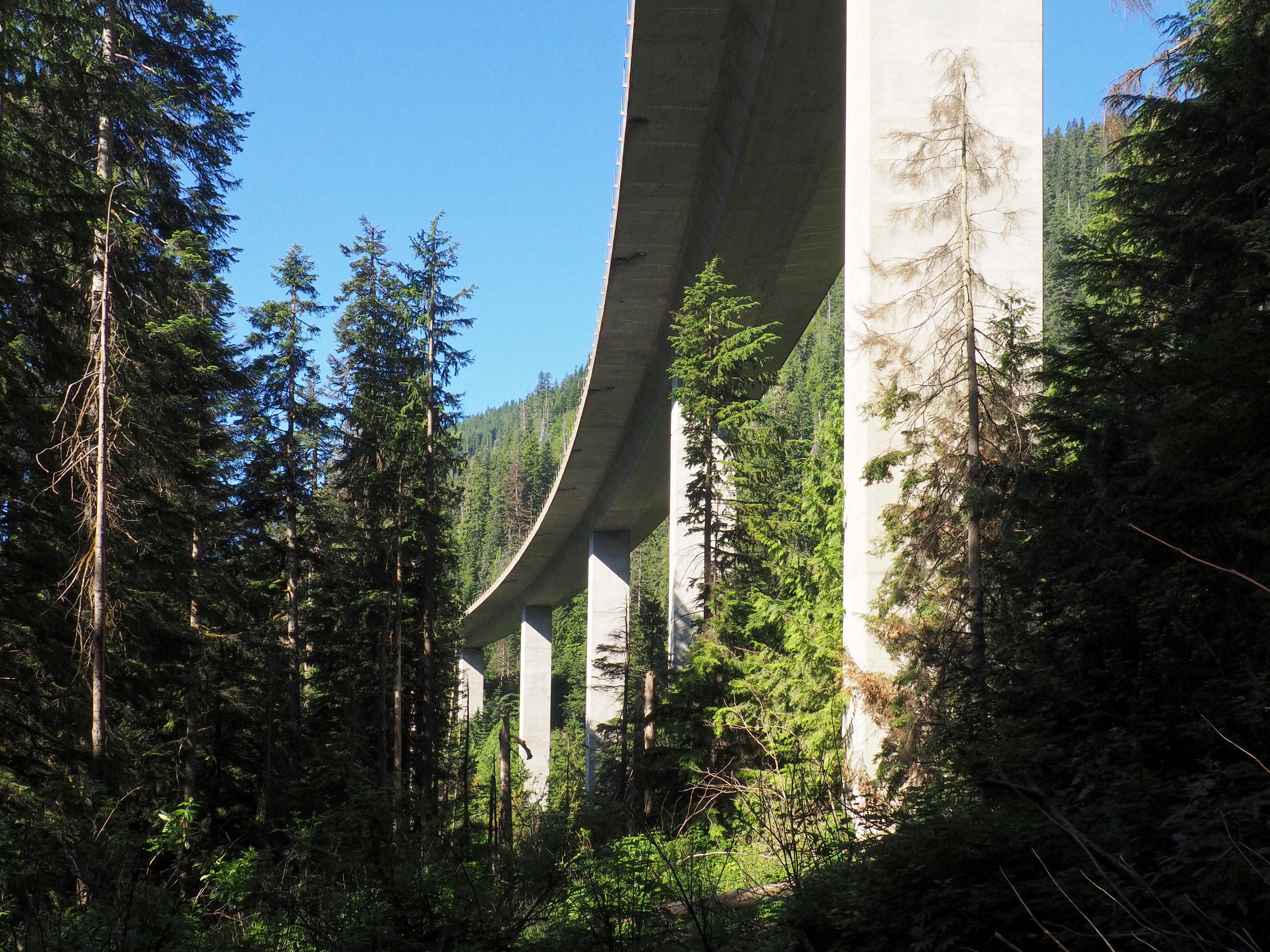 Not far from the trailhead, the Interstate 90 viaduct soars unexpectedly overhead. Not to worry – its roar is soon drowned by Denny Creek’s cheery babble and dies out altogether after approximately two miles/3.20 km. Denny Creek – Melakwa Lake Trail, July 02, 2017. 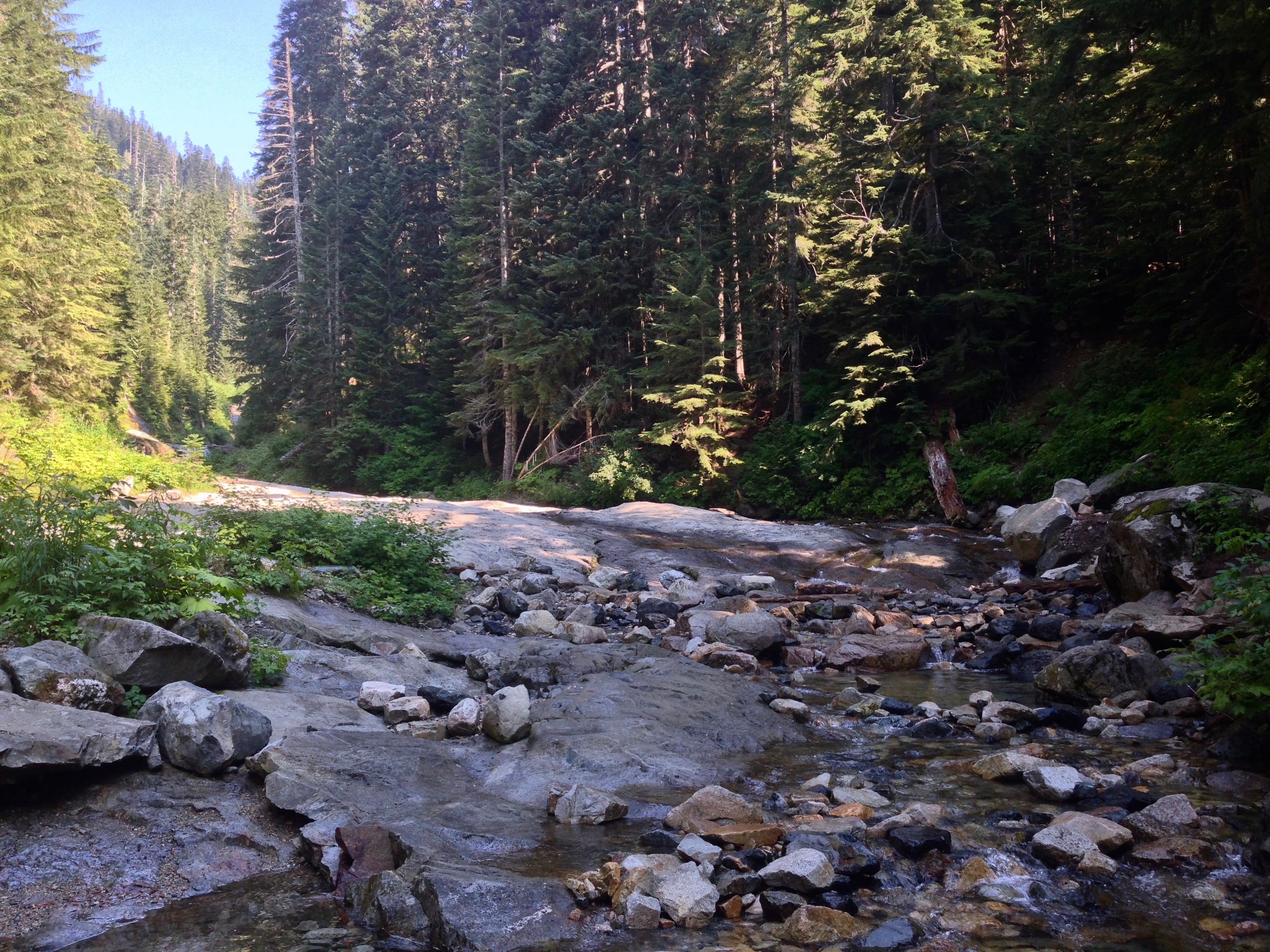 At approximately 1.25 miles/2.00 km from the trailhead, the trail reaches Denny Creek’s Slippery Slab, a smooth expanse of rock edged by a series of pools and small waterfalls that is popular with parents and small children as a natural water park. In winter and spring, higher water volume and a glaze of ice can render the creek crossing treacherous. Denny Creek – Melakwa Lake Trail, August 03, 2014. 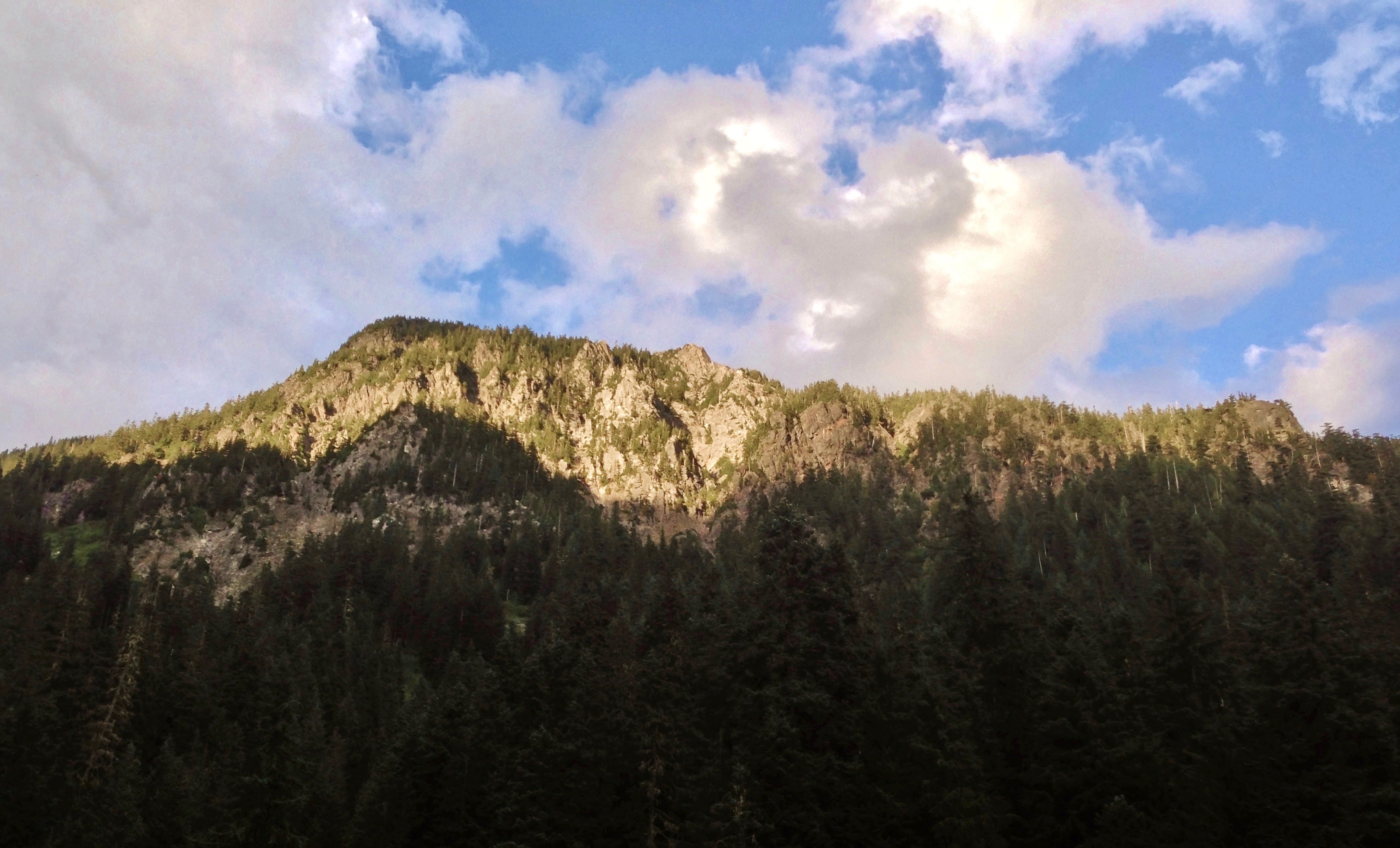 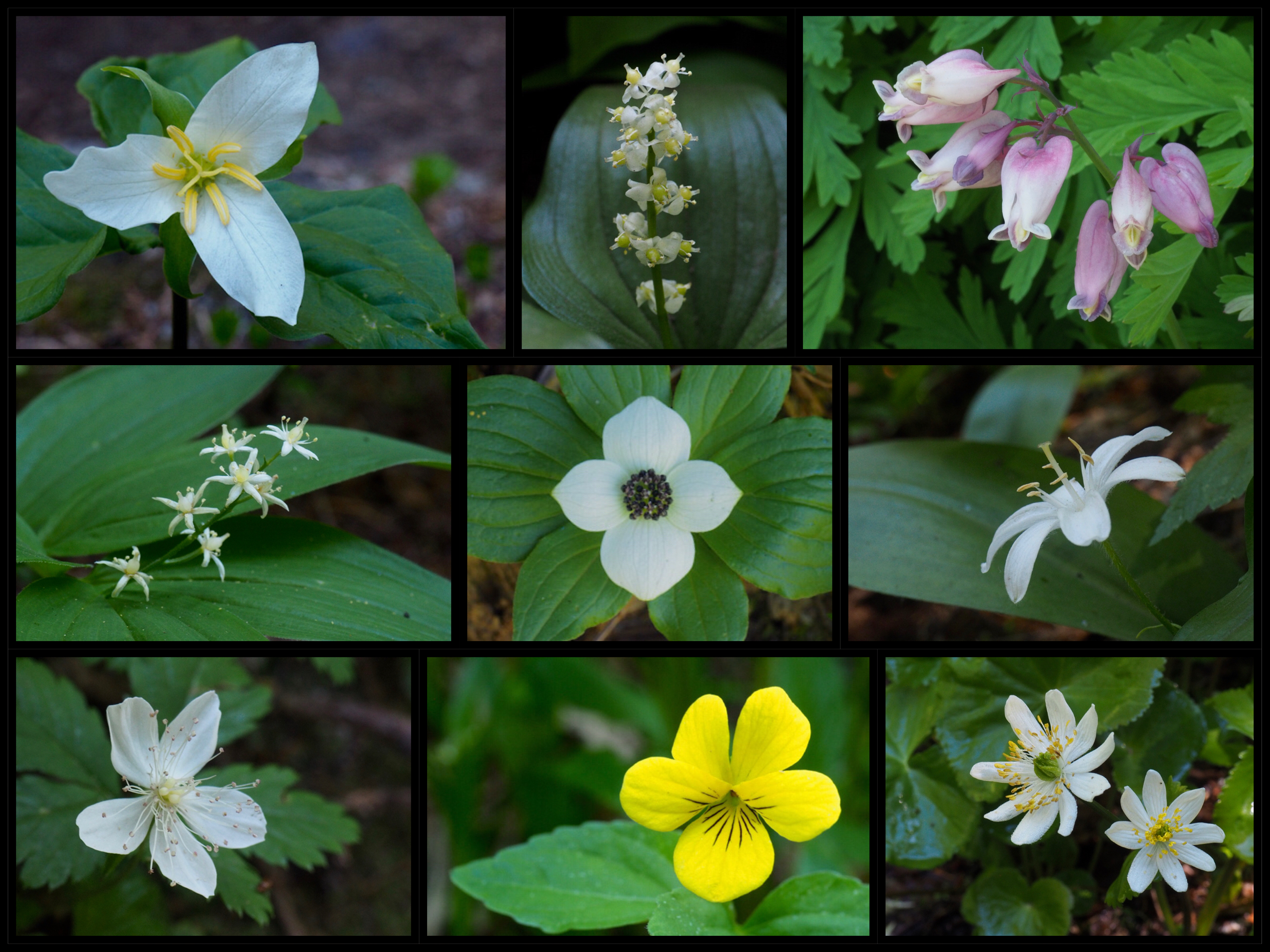 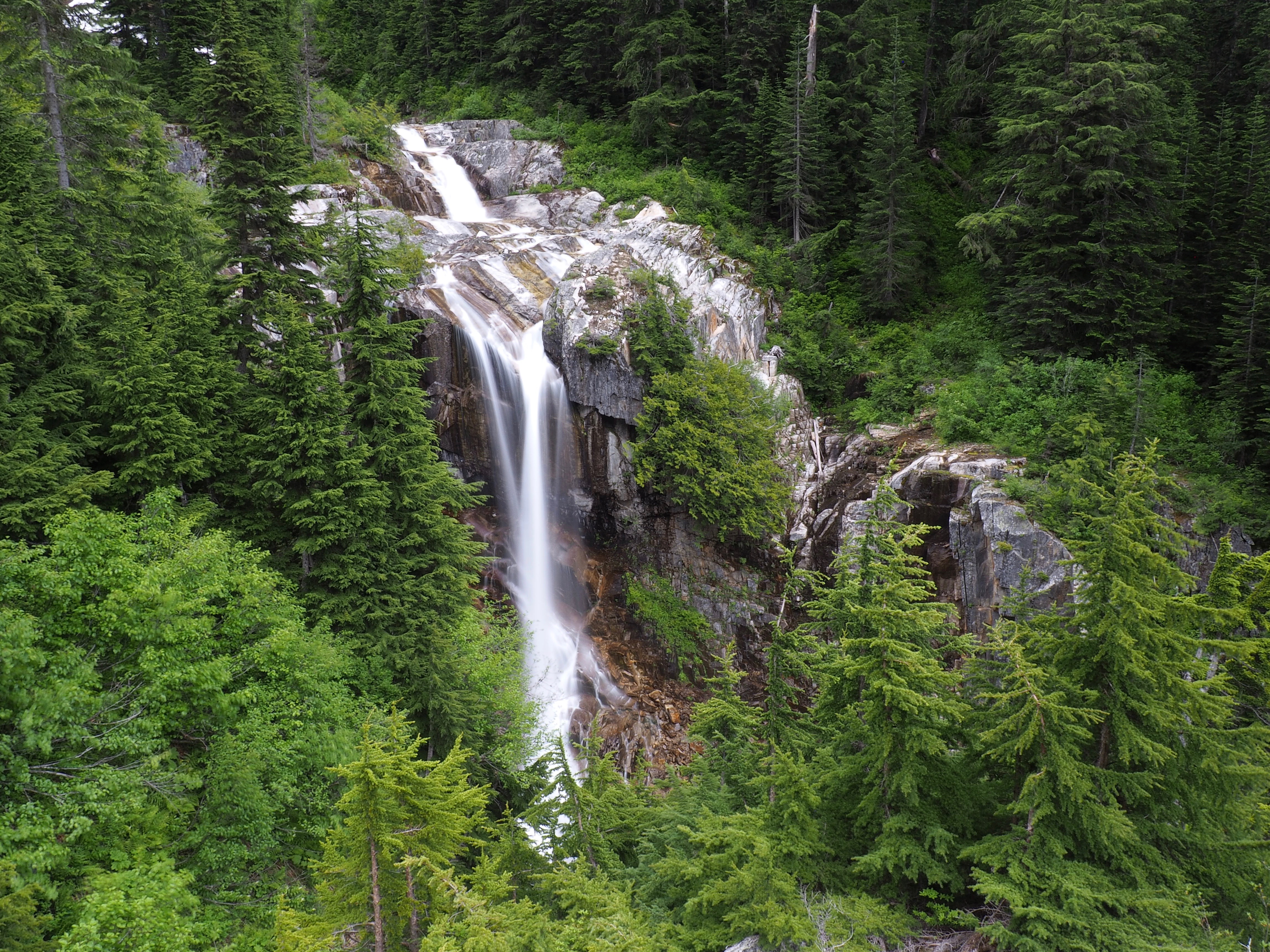 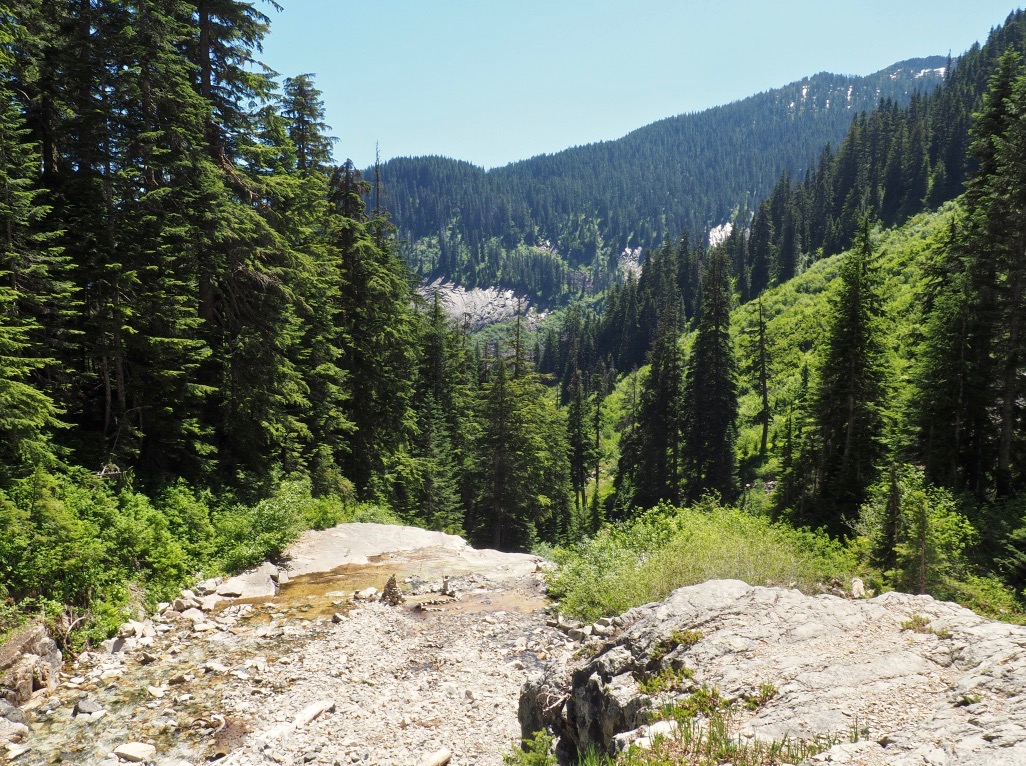 From the main trail, a short boot path descends steeply to a series of shallow pools atop Keekwulee Falls. Exercise caution near the falls’ abrupt ledge beyond the pools.
Denny Creek – Melakwa Lake Trail, July 02, 2017. 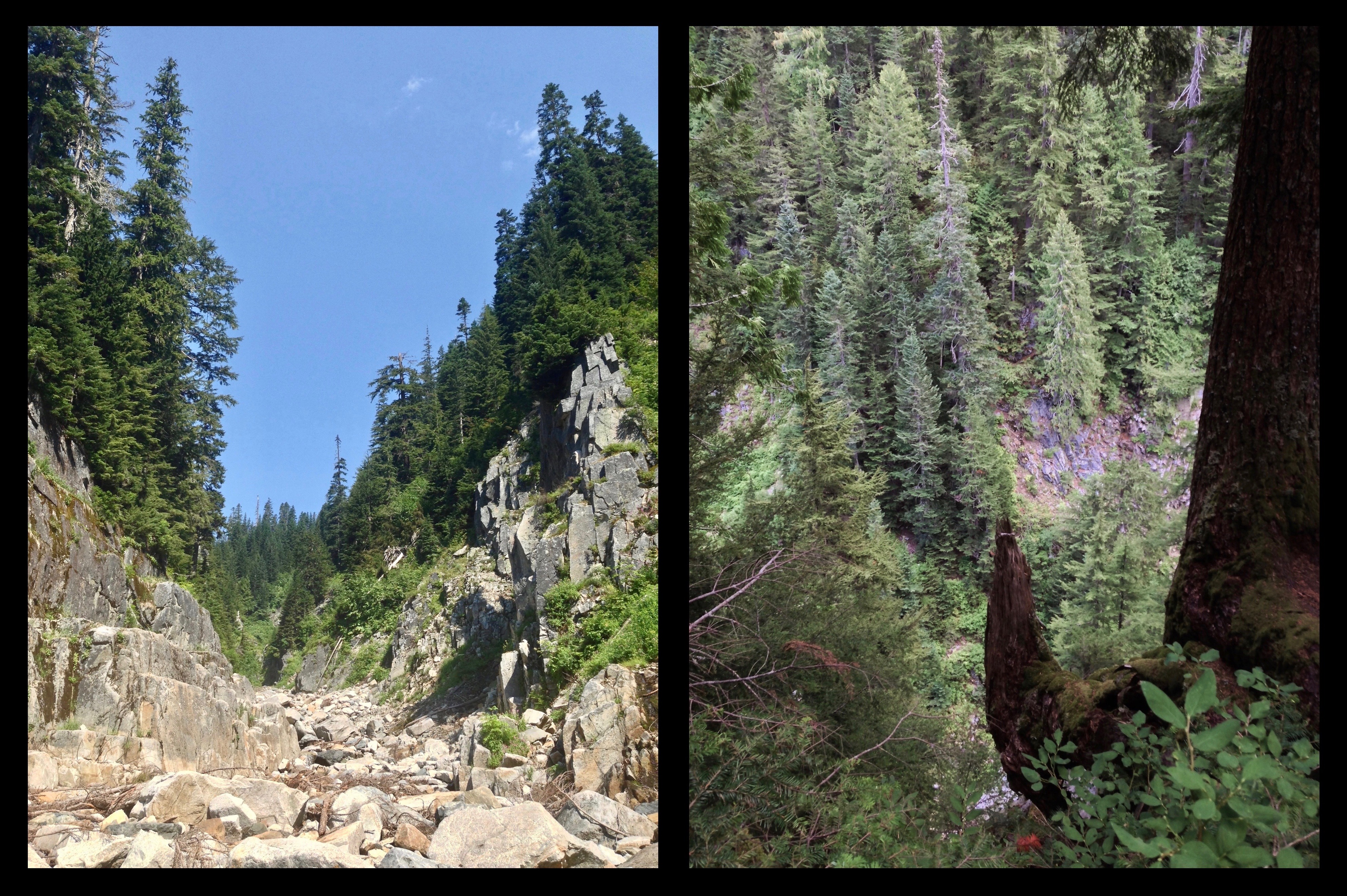 Above Keekwulee Falls, Denny Creek courses through a narrow, steeply walled canyon. The main trail switchbacks up the canyon’s edge, occasionally approaching within steps of the plunging precipice, where bird’s-eye views open across the treetops below.
Denny Creek – Melakwa Lake Trail, August 03, 2014 and September 02, 2013. 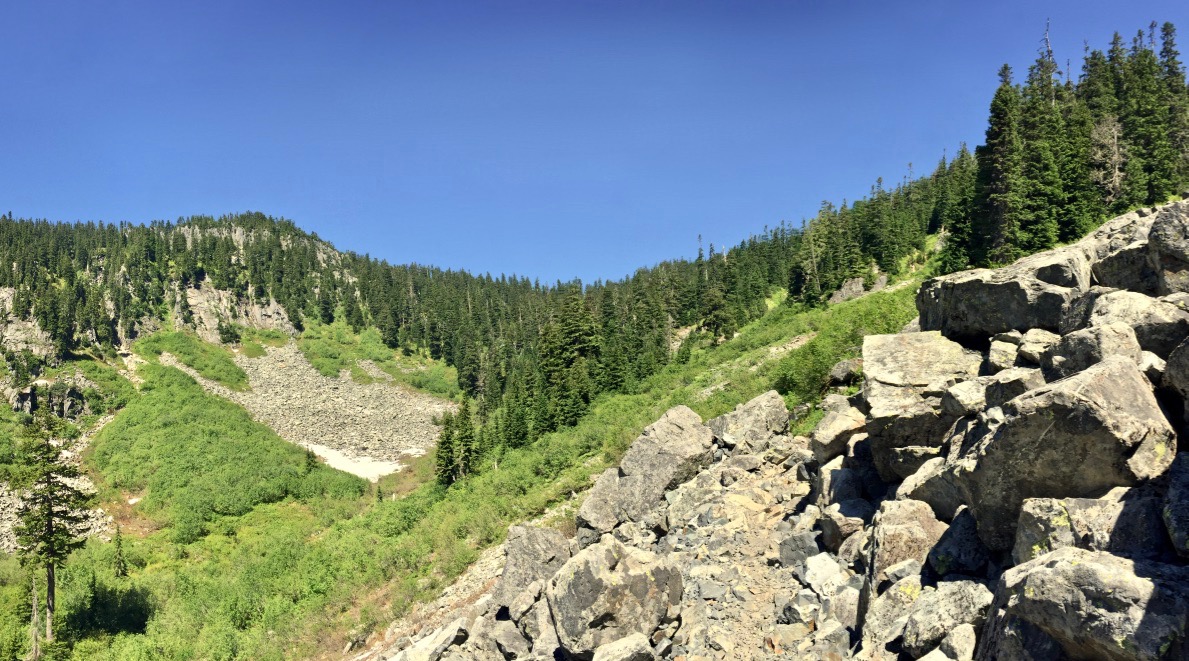 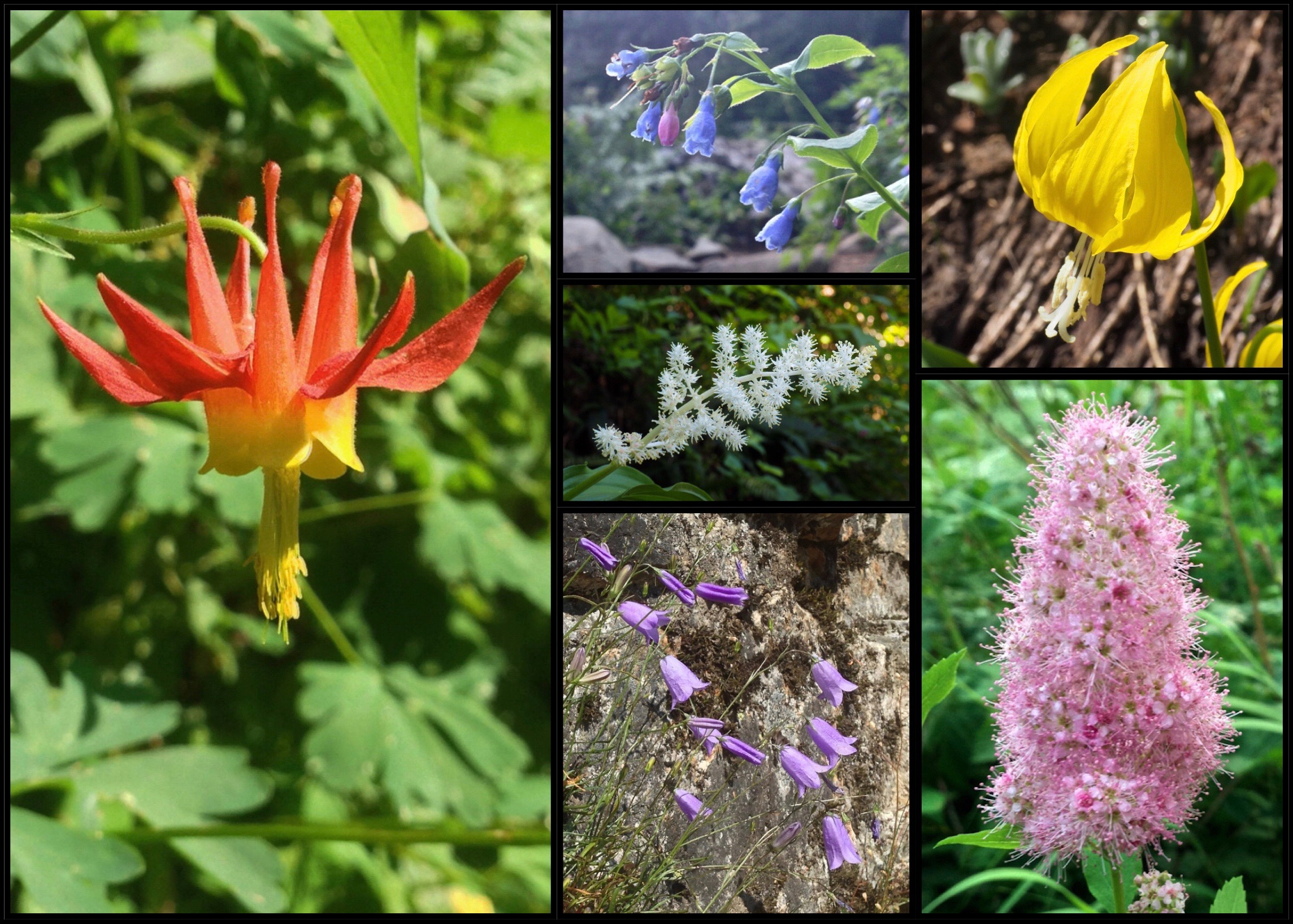 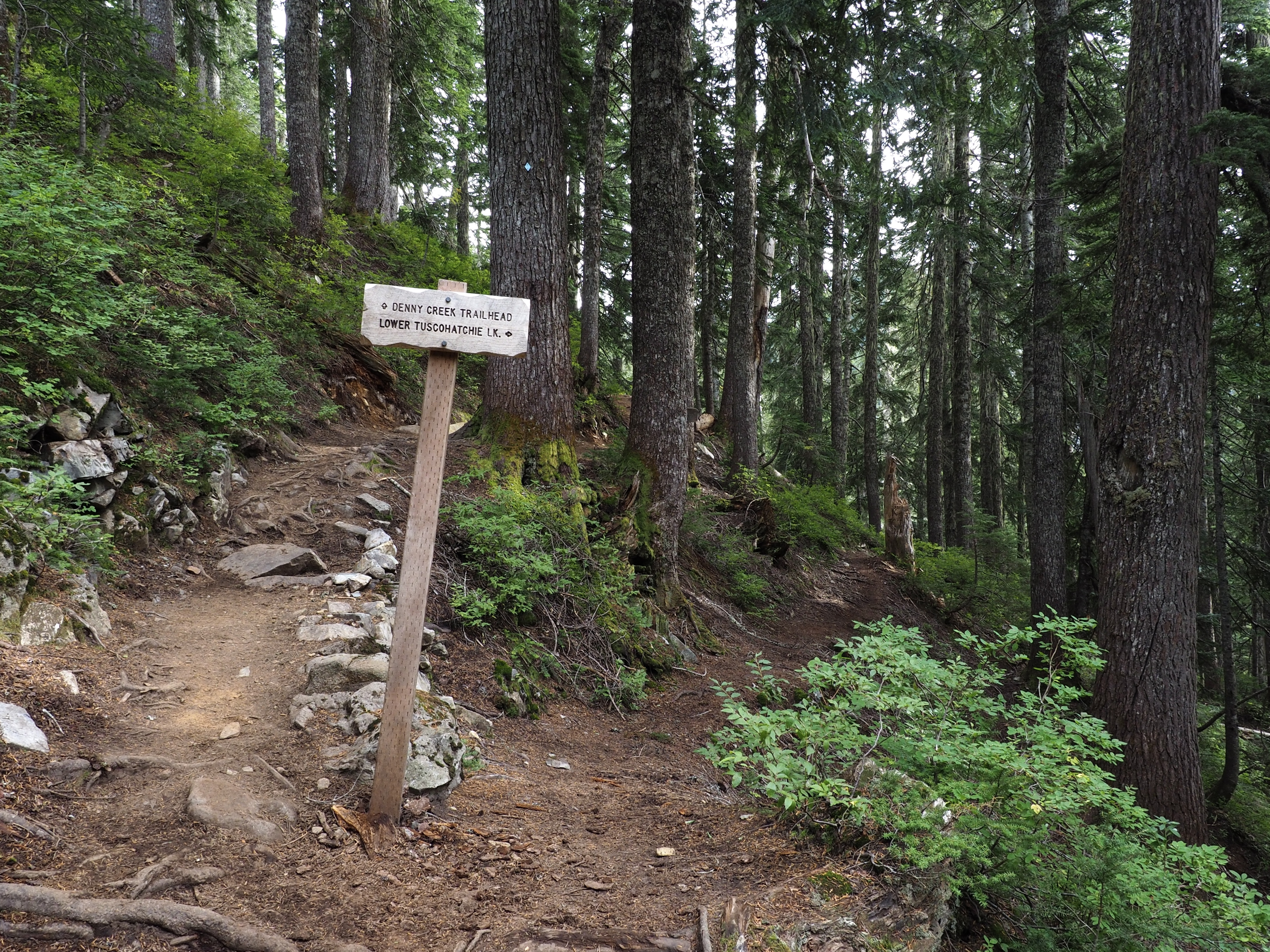 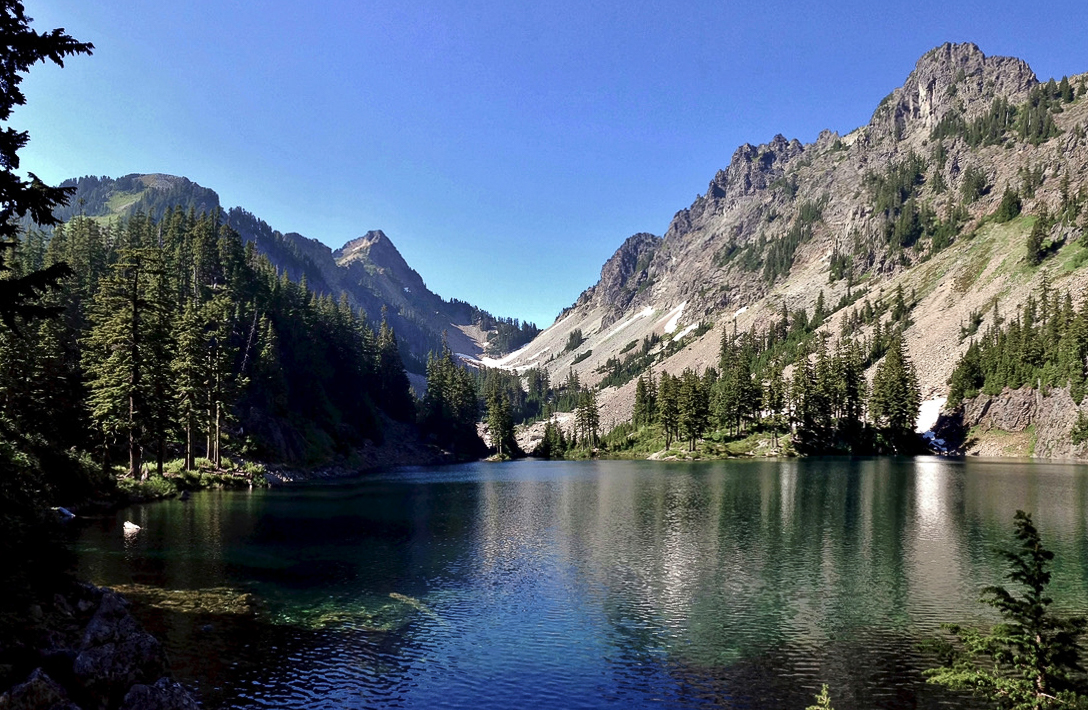 Melakwa Lake pools in the rift between Kaleetan Peak and Chair Peak. (In the Chinook jargon, “kaleetan” means “arrow.”) Upper Melakwa Lake, its sister, lies just beyond the tree-lined straits on Melakwa Lake’s north end. By stones and leaps, the trail crosses the narrow connecting streams and leads left to Upper Melakwa Lake and right to the not-quite-detached “island” at the base of Chair Peak. Denny Creek – Melakwa Lake Trail, July 21, 2013. 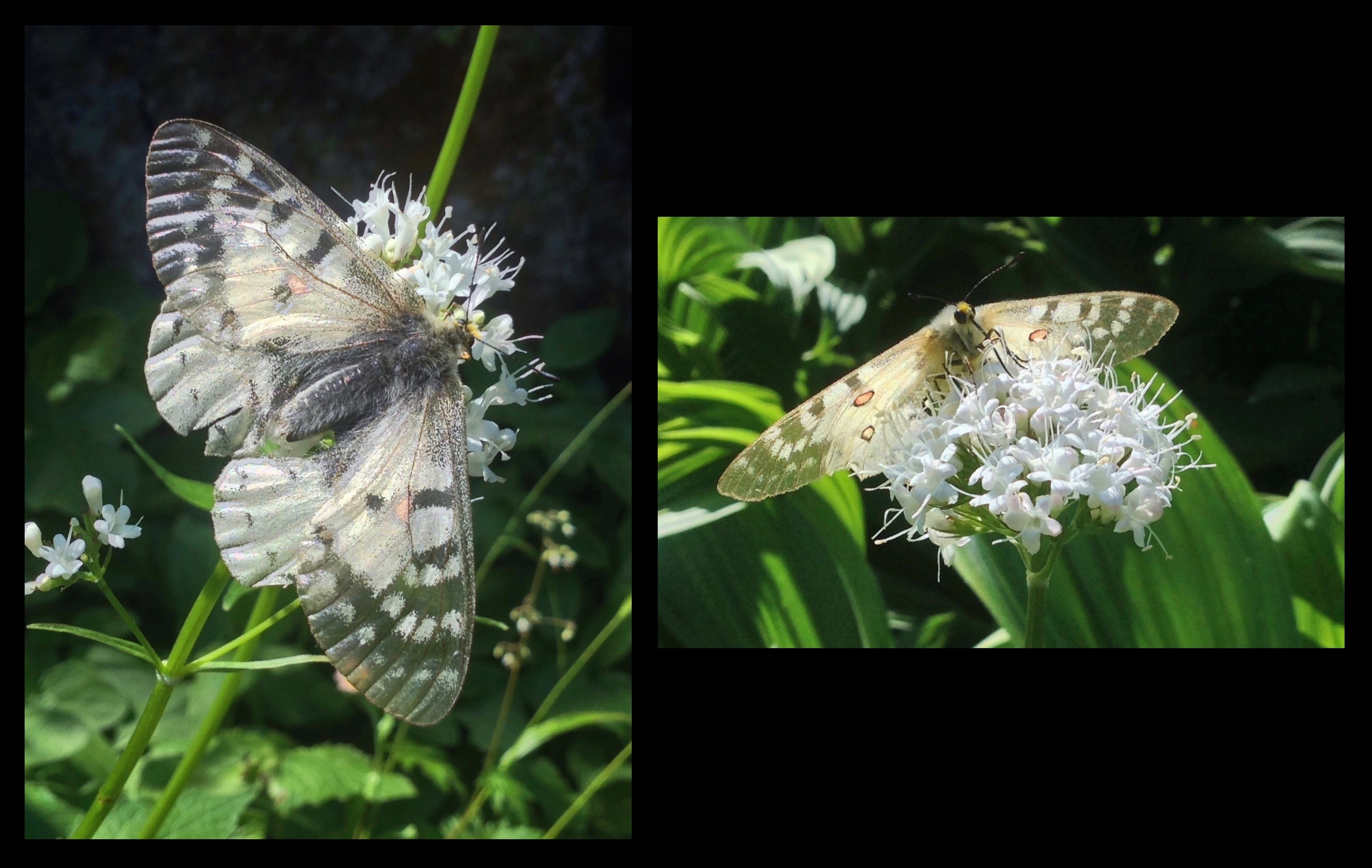 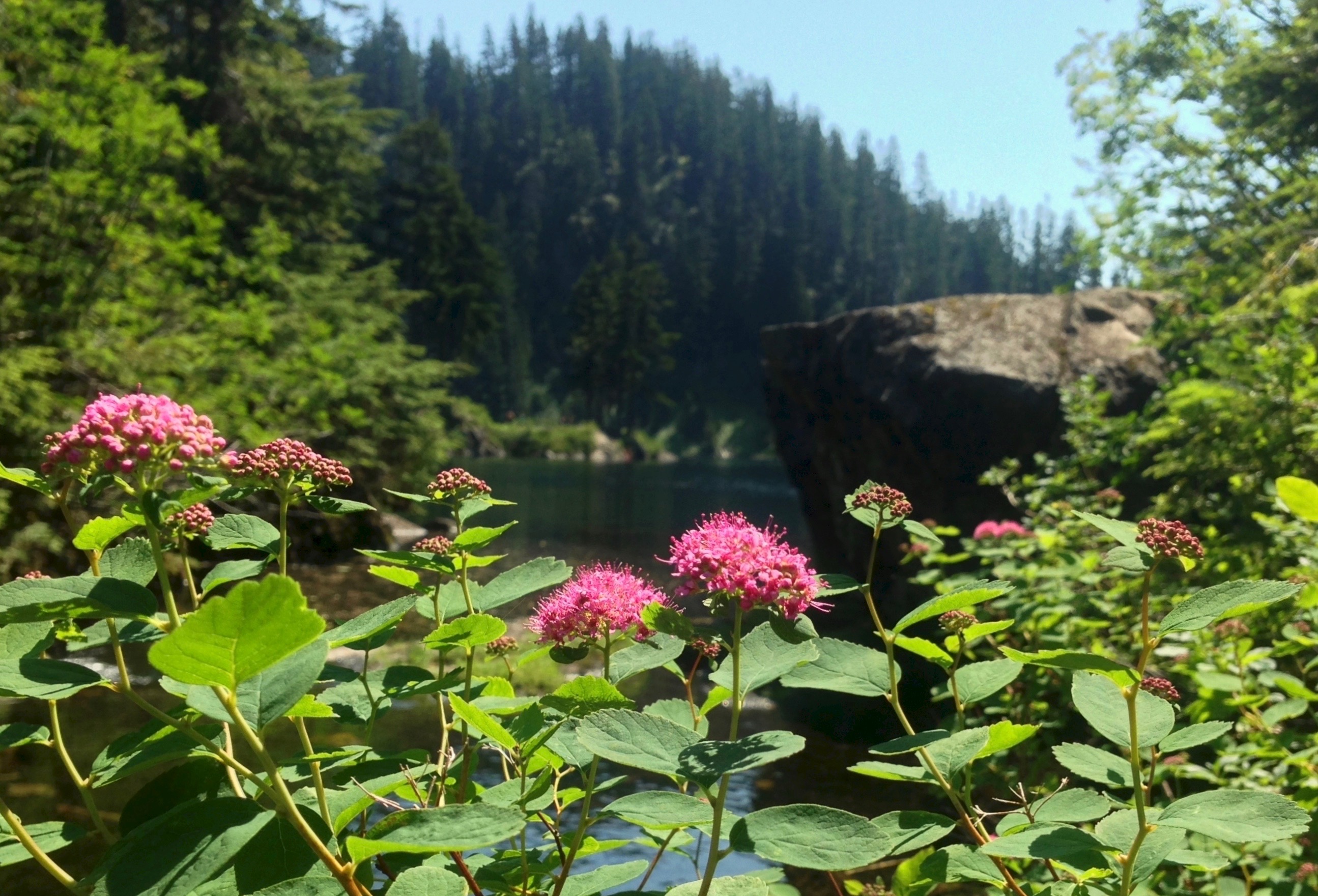 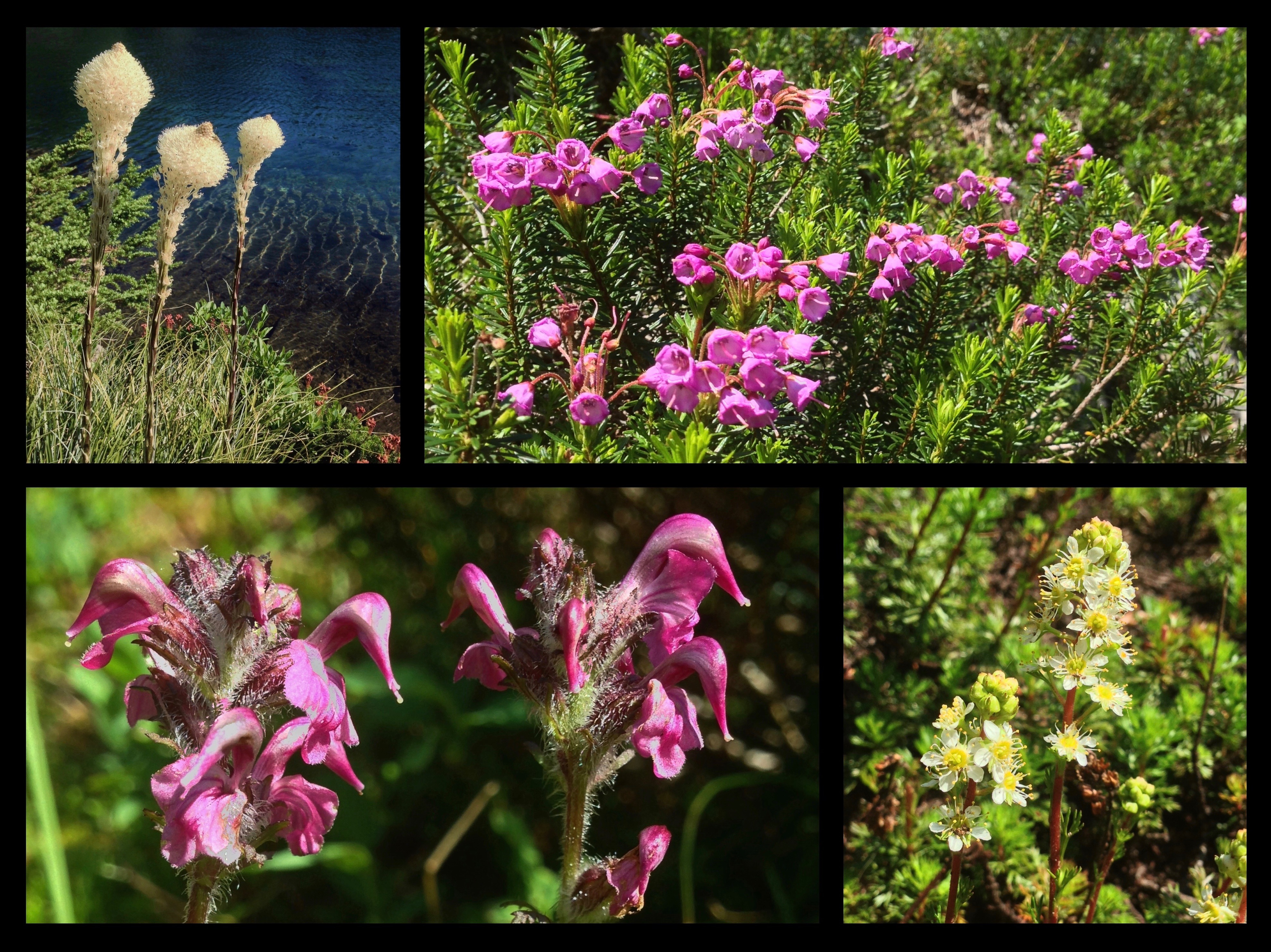 Upper Melakwa Lake’s stony waters are the final and well-earned destination of this rigorous hike. Intrepid hikers with fortitude and strong ankles can venture further and pick their way up the bouldered hollow between Kaleetan Peak and Chair peak for a sweeping view from Melakwa Pass.
Denny Creek – Melakwa Lake Trail, July 02, 2017.