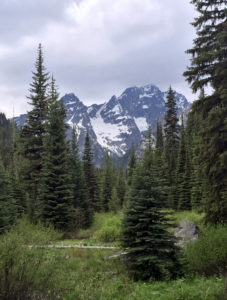 The Stuart Lake Trail offers increasing glimpses of the Stuart Range as it climbs, including Sherpa Peak (left) and Mount Stuart (right).
Lake Stuart Trail, May 29, 2015.

Lake Stuart lies within the Stuart Range that forms the spine of the scenic clutch of peaks and lakes known as the Enchantments.  Outside of the Enchantments’ core zone, Lake Stuart nevertheless offers views of the Stuart Range’s characteristically jagged peaks with more solitude than one will find in the more popular areas.  Although camping in the Enchantments Permit Area (which includes Lake Stuart) is limited and available only by lottery, day hiking is permitted with the standard Northwest Forest Pass.  At 9.00 miles/14.50 km round-trip with a relatively moderate grade, the trail to Lake Stuart is easily completed as a day hike.

The trail passes through mostly coniferous forest, ranging from moist thickets to the drier, almost scrub-like woodland typical of the east slopes of the Cascades.  Evidence of past forest fires is occasionally visible along the trail’s lower portion.  The varied woodland and occasional meadows support a broad array of small spring and summer wildflowers that reveal themselves to the watchful hiker.  In autumn, the mostly deciduous plants of the under- and middlestory light the trailside with vibrant hues, whilst hitherto undistinguished larches, cottonwoods, and aspens suddenly blazon the upper mountainsides with gold.  Tracking first Mountaineer Creek and then its unnamed tributary that flows from Lake Stuart, the trail is seldom far from the rush of tumbling waters.  A side trail to Colchuck Lake  branches from the main trail approximately 2.00 miles/3.20 km from the trailhead.  Given Colchuck Lake’s popularity and position as a portal to the core Enchantments zone, expect to encounter other hikers periodically up to the side trail; however, solitude will prevail in the wilds beyond.  Throughout, no vehicle or other human-made noise mars the wilderness tranquility. Along the trail, Earth’s stony foundations are frequently visible through the forest’s thin soil, exposed or deposited by the ice age glaciers that raked the landscape and sculpted the dramatic peaks and valleys that exist today. Lake Stuart Trail, May 28, 2015. The scrubby woodland surrounding the trail varies in character and thickness and bears evidence of frequent lightning-sparked wildfires common to the area. Lake Stuart Trail, October 01, 2016. 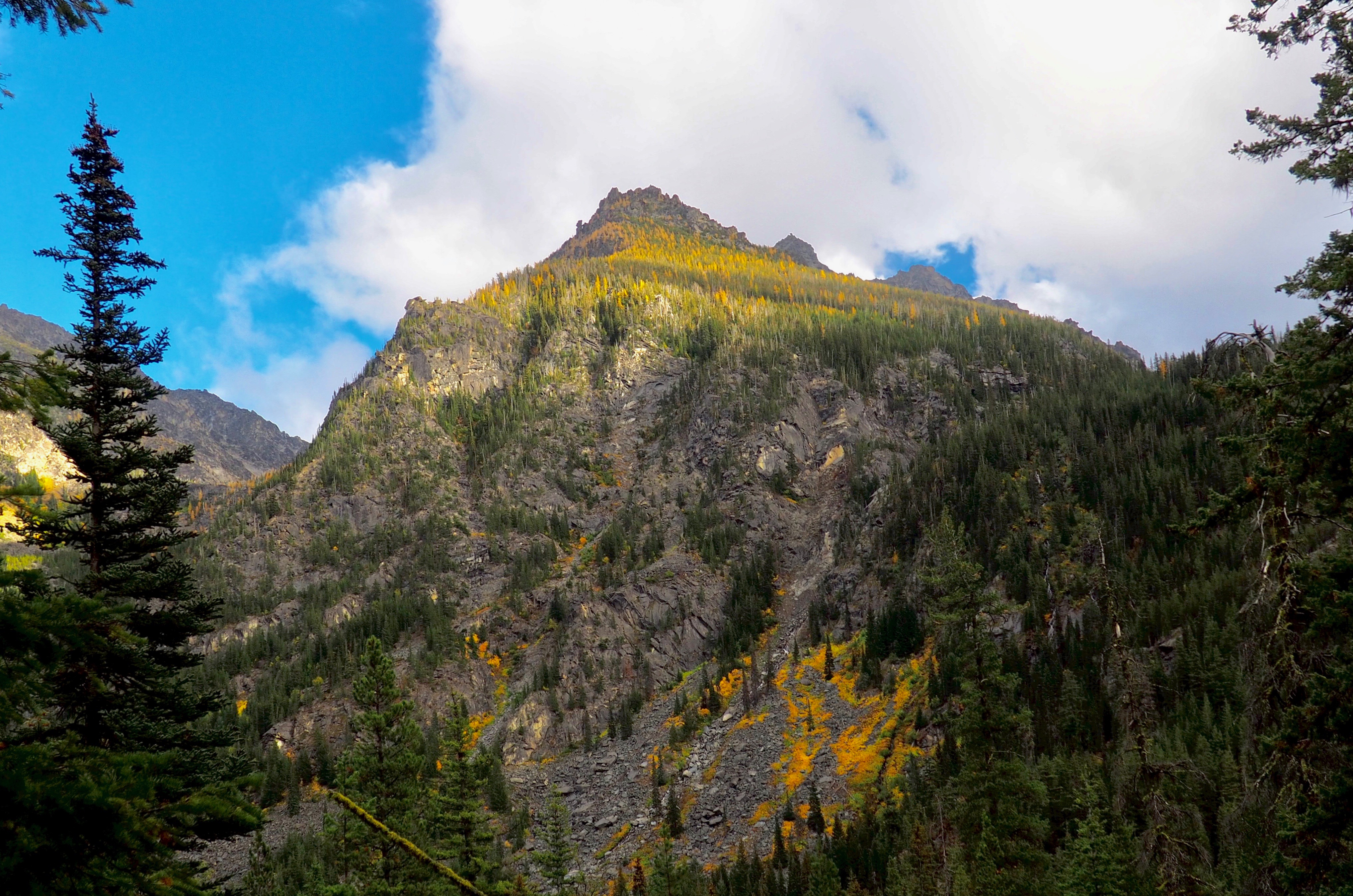 At approximately 4.00 miles/6.40 km from the trailhead, a broad meadow opens to an expansive view of the serrated skyline that characterizes the Stuart Range, including here, from left to right, Argonaut Peak, Sherpa Peak, and Mount Stuart. Lake Stuart Trail, May 29, 2015. Leaving the meadow behind, the trail climbs a small saddle along Lake Stuart’s unnamed creek (Stuart Creek would be a logical appellation), where its thundering waterfall is heard long before seen. Curiously, many peaks and creeks in the Enchantments and elsewhere in the broader Alpine Lakes Wilderness lack names, the result of the National Park Service’s policy of leaving features unnamed that were still nameless at the time land was designated a wilderness area, in order to preserve its truly wild character. Lake Stuart Trail, May 29, 2015. Mount Stuart and its retinue of peaks greet the sight upon arrival at Lake Stuart.
Lake Stuart Trail, May 29, 2015. 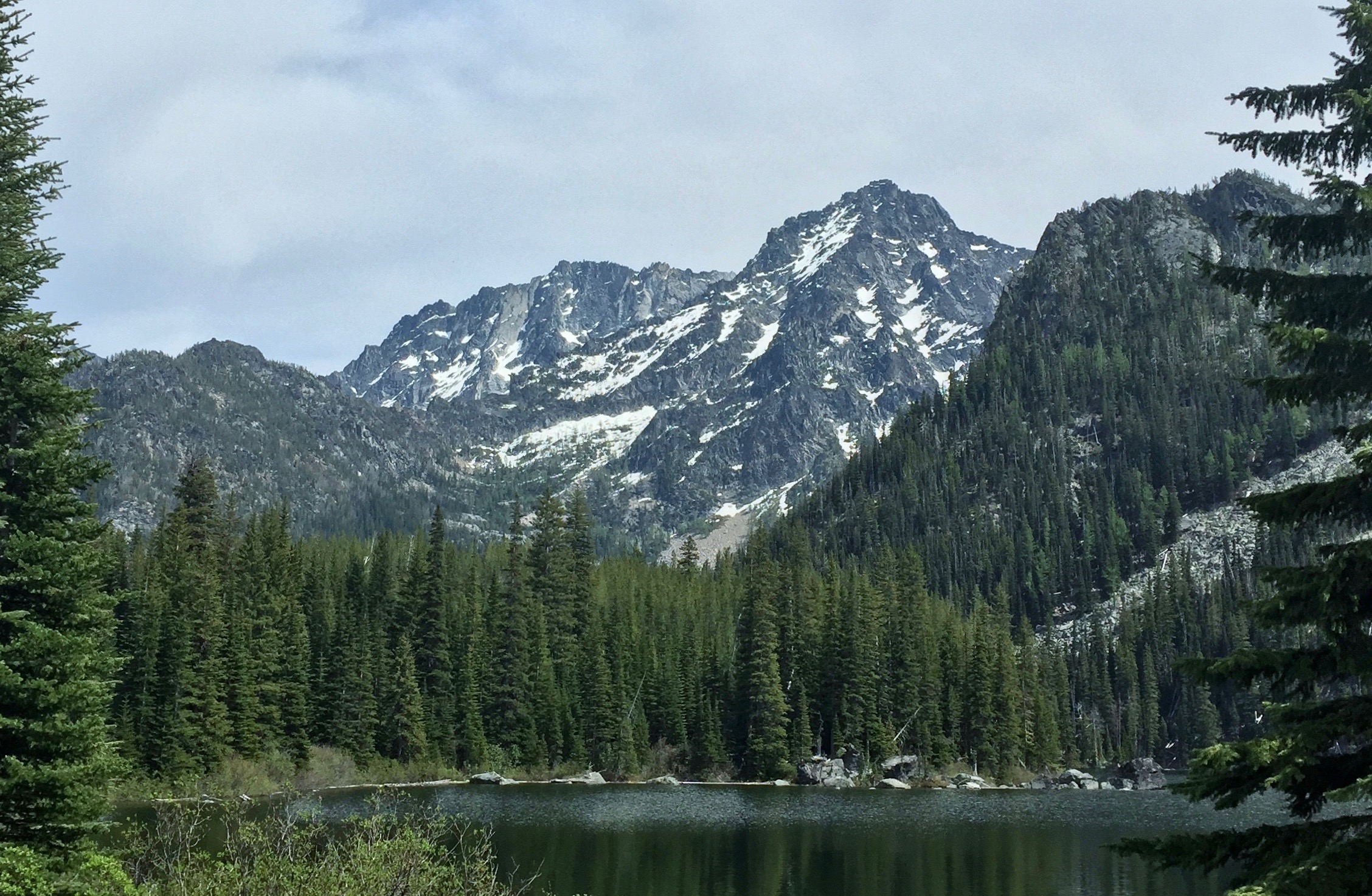 From Lake Stuart’s far shore, the view reaches back down the ridge of peaks that line the trail on its final ascent to the lake. Lake Stuart Trail, May 29, 2015.