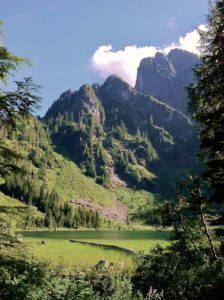 As it climbs, the trail becomes increasingly rugged, often worn to rocks and roots that can be treacherous to navigate, especially when wet.  Be prepared with traction gear of choice.  Given its short distance and relative ease of access, the trail is a popular destination.  Those seeking more solitude may wish to visit on a less-frequented weekday.  Aside from the occasional chatter of other hikers, no sounds of civilization mar the alpine tranquility of birdsong and tumbling rills wafting across the stony lake basin.

For nearly the first half its length, the trail climbs through dense stands of relatively new forest. Throughout, it passes the poignantly impressive remnants of the original, ancient forest, felled by loggers in the last century. Notches still visible in the sides of the stumps remain from where springboards were inserted into the trees to provide footing for the woodcutters to accomplish their handiwork. This stump’s girth and deep, rippled furrows suggest that it was a western redcedar (Thuja plicata), a cypress species misnamed as a “cedar” because of its similarly aromatic, rot-resistant wood. Heather Lake Trail, July 16, 2021.

Worn by legion successive footfalls, the upper (and steeper) half of the trail is frequently reduced to bare rock and matted roots that can be challenging to navigate, especially when wet. (The trail in this photo clambers over the nearly adult-high rock on the left of the tree in the center.) Be prepared with traction gear of your choice. Heather Lake Trail, July 16, 2021. 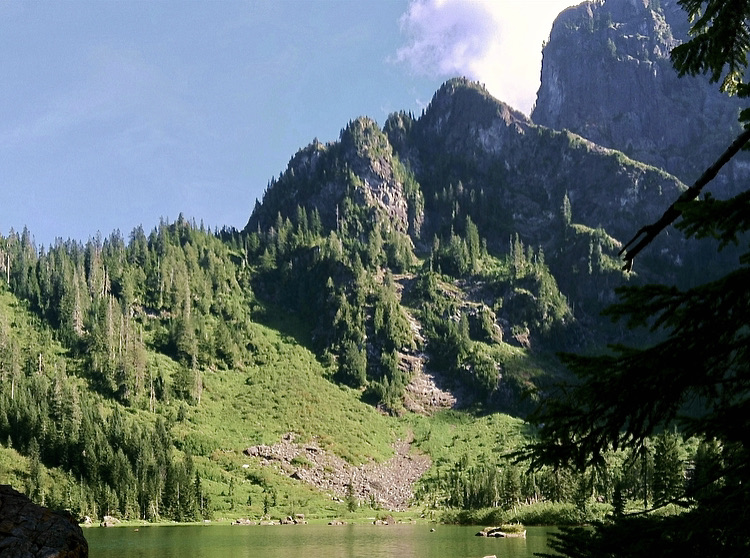 Heather Lake gathers beneath Mount Pilchuck‘s very eaves. Upon reaching the lakeshore, the trail diverges in either direction to encircle the lake. Heather Lake Trail, September 02, 2012.

Along the lake, keep an eye out for the “Elephant Tree,” a curiously crooked mountain hemlock (Tsuga mertensiana) doubling its trunk beside the trail. Such growth patterns are actually common around the lake basin, likely the result of injuries sustained from the press of snowpack and avalanches in the harsh alpine environment. Heather Lake Trail, July 16, 2021.