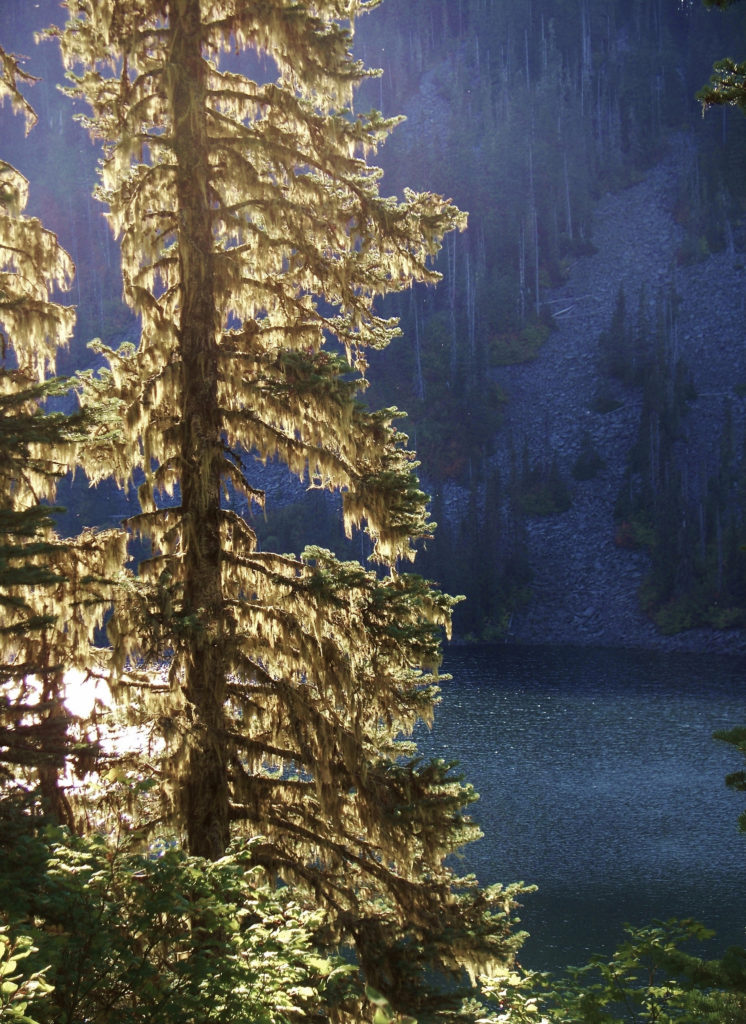 The trail to Pratt Lake climbs gradually through pleasant, evergreen woodland, crossing several chattering brooks before dropping into the large stony basin where the lake pools on the edge of the Pratt River Valley below.  Here and there, bird’s-eye views open to surrounding peaks and hollows.  The trail eventually loses the distant rush of Interstate 90 as it arcs northward and deeper into wilderness, as well as the majority of other hikers who turn upward for the popular summit of Granite Mountain after the first 1.00 mile/1.60 km.

The trail rounds the lower flanks of Granite Mountain and its neighbor, Tusk O’Granite (or West Granite) Mountain, climbing moderately to the Pratt Saddle, the narrow ridge that connects them to Pratt Mountain, before descending steeply into the lake’s massive basin along the boulders of Pratt Mountain’s eastern slope.  The trail is part of a larger network that links many popular hiking destinations in the southwest corner of the Alpine Lakes Wilderness.  Along the way, connecting trails branch to the summit of Granite Mountain, down to Talapus and Olallie lakes, beyond the Pratt Saddle to Island, Rainbow, and Mason lakes, and, past Pratt Lake, to Lower Tuscohatchie and Melakwa lakes, among other points more distant.  (At just 0.50 miles/0.80 km beyond Pratt Lake, Lower Tuscohatchie Lake is a worthy jaunt for a bit of solitude and impressive views.)

During the brief alpine spring, a panoply of wildflowers populates the trailside, culminating in drifts that sweetly scent the air beside the lake.  In late spring and early summer, listen for the enchanting, piccolo-like calls of hermit thrushes (Catharus guttatus) echoing along the trail and throughout the lake basin, punctuated by the mournful cries of varied thrushes (Ixoreus naevius), particularly in the evening as other birds fall silent.

Numerous small streams patter across the trail throughout the year, some just downstream from charming waterfalls. However, even in winter they can usually be crossed dry-shod by skipping across the stones scattered through their midst. Pratt Lake Trail, June 12, 2016.

Shortly before the trail’s junction with the trail to Granite Mountain’s summit, it skirts the mountain’s avalanche chute, the treeless, debris-strewn swath of which is testament to the destructive power of a mountaintop of snow funneling down a narrow ravine. The trail is sometimes obscured by debris from the previous winter’s ravages, but it does not cross the chute; rather, it switchbacks sharply left shortly after entering the chute. Pratt Lake Trail, July 14, 2012. 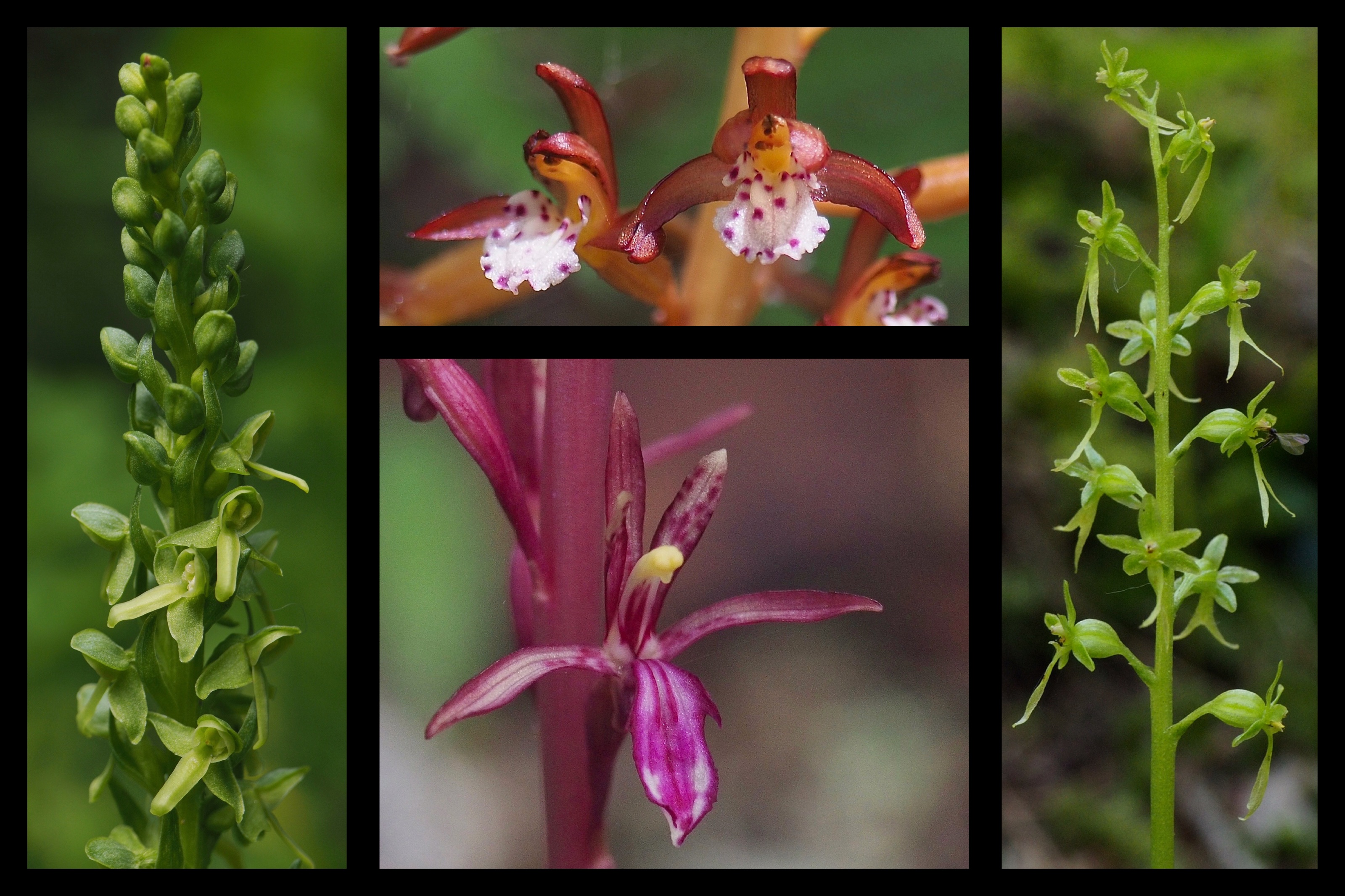 The Pratt Lake Trail offers opportunity to spot a number of Pacific Northwest orchid species. Although much smaller than those of their tropical cousins, the blooms of these native species nevertheless display classic orchid form. Look for the slender bog orchid (Platanthera stricta) (left) amongst the grasses in seeps along the way. The spotted coralroot (Corallorhiza maculata) (upper center) is abundant along the trail’s lower elevations. The western, or, Pacific coralroot (C. mertensiana) (lower center) can be found in the dense forest along the Pratt Saddle and down the lake basin’s slopes. In early spring, the tiny heartleaf twayblade (Neottia cordata) (right) is one of the first to bloom.
Pratt Lake Trail, May 28, 2017 and June 05 and 12, 2016.

At approximately 4.20 miles/6.70 km from the trailhead, the forest opens to a glimpse of Olallie Lake and, on a clear day, Mt. Rainier. (The viewpoint is sometimes called the Olallie Lake Lookout, although it is nothing other than a short section of trail from which the lake is visible.) 0.25 miles/0.40 km farther, the trail reaches the Pratt Saddle, where it branches again, left to Island and Rainbow lakes, and right, down to Pratt Lake on the other side. Pratt Lake Trail, June 05, 2016.

In winter, the Olallie Lake Lookout is a worthy hiking or snowshoeing destination itself, with a round-trip distance of approximately 8.30 miles/13.40 km. Few venture beyond the lookout in winter, as snow deepens considerably on the Pratt Saddle and in the basin on its opposite side.
Pratt Lake Trail, February 02, 2014.

As the trail descends into the lake basin, it picks its way across several massive boulderfields strewn across the flanks of Mount Pratt, where the view opens to Kaleetan Peak’s distinctive spire on the horizon. Pratt Lake Trail, June 22, 2013.

After many peekaboo glimpses from the Pratt Saddle, Pratt Lake finally comes into view pooled in a stony basin above the Pratt River Valley. Pratt Lake Trail, August 07, 2022.

Stones invite lakeside seating at the far end of Pratt Lake. Here, the view reaches back over the route taken, with the Pratt Saddle seen as the notch on the left horizon and Pratt Mountain rising in the center. While this is a worthy turnaround point, the hike can be lengthened by continuing on the Melakwa — Pratt Lake Traverse an additional 0.50 miles/0.80 km to Lower Tuscohatchie Lake or even 2.90 miles/4.67 km to Melakwa Lake. For both, follow signage for “Main Trail” and “Melakwa Lake.”
Pratt Lake Trail, June 05, 2016. 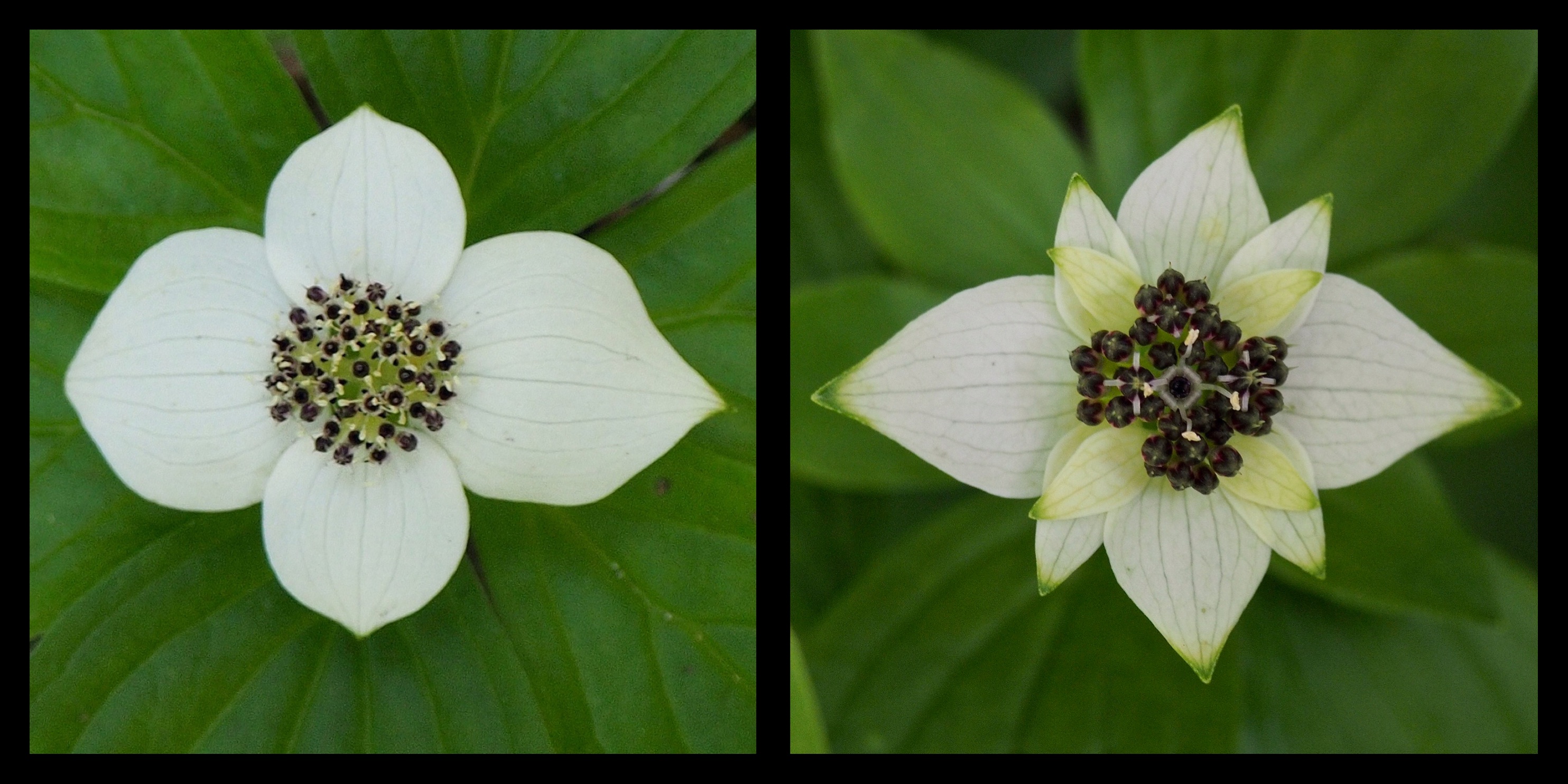 Tiniest of all the dogwoods, bunchberries (here, western bunchberries, Cornus unalaschkensis), abound throughout the Cascadian woodlands. Bunchberry blooms typically consist of four white bracts (not petals, but more like colored leaves) surrounding a cluster of tiny, actual flowers in the center, as in the photo on the left. However, a few clumps of bunchberries along the Pratt Lake Trail have added several smaller, symmetrically placed bracts that lend their blooms a more star-like appearance, as in the photo on the right. Pratt Lake Trail, June 12, 2016.