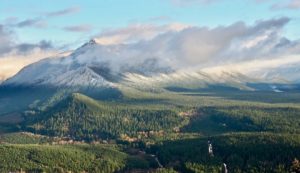 Streaming clouds from its wintry mantle, Mount Washington rises dramatically from the surrounding lowlands in this view from Rattlesnake Ledge. December 30, 2016.

A bastion at the edge of the Cascades, Mount Washington is one of the first peaks encountered east of Seattle, Washington.  Previously stripped of forest by logging and wildfires, Mount Washington is now cloaked with woodland in varying stages of recovery.  The rocky trail begins in a dim corridor of close, deciduous forest and climbs steeply for approximately half its distance before relenting in its grade.  As the trail enters young conifer plantings, views open increasingly until it reaches the summit’s summertime display of wildflowers and sweeping lake and mountain vistas.

The trail is one of several crisscrossing Olallie State Park.  Signage along the trail is sparse and confusing.  From the parking area at the trailhead, a short trail leads to a gravel road above the parking area.  (The gravel road can also be reached directly at the gate on the left of the parking area entrance.)  Follow the gravel road uphill a short distance to the Iron Horse Trail (also called the John Wayne Pioneer Trail), the former route of an old railroad between Chicago, Illinois and Tacoma, Washington and now a wide gravel trail popular with local walkers, runners, and cyclists.  Turn right onto the Iron Horse Trail.  In a scant few hundred feet/150 meters, the poorly marked trail to Mount Washington branches left from the Iron Horse Trail — look for small stone cairns and a message scratched into the bark of a tree to identify the Mount Washington Trail, as shown below.  About 2.80 miles/4.50 km from the trailhead, the trail briefly merges with the unmarked Olallie Trail before continuing on the other side approximately 200 feet/60 meters to the left.  Again, look for both formal and informal signage to guide the way, as shown below. The Mount Washington Trail’s nondescript departure from the Iron Horse Trail, shown here on the upper left, is easy to miss, especially given several nearby false trails that lead nowhere. The trail is marked by an easily toppled cairn and bounded by two small red alder trees (Alnus rubra) (lower left). The alder on the right of the trail bears the small, carved inscription, “Mt. WA” (right).
Iron Horse Trail/Mount Washington Trail, May 25, 2015. Natural stone walls characterize much of the trailside, some adorned with ferns and vibrant lichens. A cave in one such wall about 1.00 mile/1.60 km from the trailhead is used by rock climbers for training — look for climbing hardware dangling from the ceiling of the cave as you pass.
Mount Washington Trail, July 09, 2009 and July 30, 2016. Here and there, windows in the forest offer peek-a-boo views of other mountains beyond. To the northeast, the view stretches up the Middle Fork Snoqualmie River Valley.
Mount Washington Trail, July 09, 2009. Foxgloves’ (Digitalis purpurea) lolling bells dangle from a rocky meadow in one of the forest’s
only clearings along the trail. Mount Washington Trail, July 30, 2016. 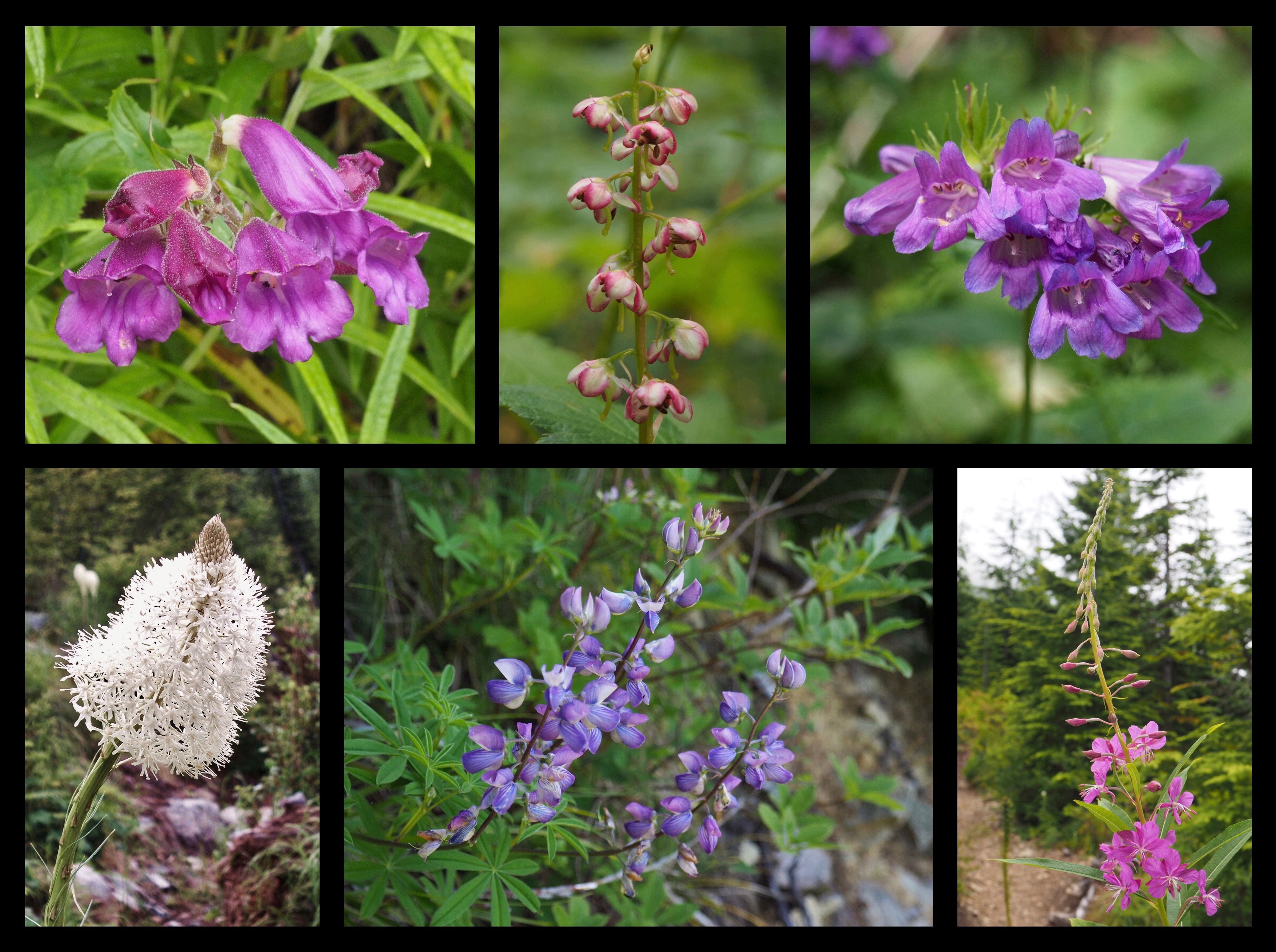 Just below the summit, forest again encloses the trail and slender tree trunks pinstripe the surrounding mountainside. Note the downhill curve at the base of each tree, created by the weight of winter snows when they were young and pliable. Mount Washington Trail, July 26, 2016. Beyond the slowly rising forest, the mountaintop clearing affords a bird’s-eye glimpse of Chester Morse Lake and Masonry Pool, which were created by damming the Cedar River and inundating what was once Cedar Lake to supply water to Seattle, Washington. Mount Washington Trail, July 30, 2016.