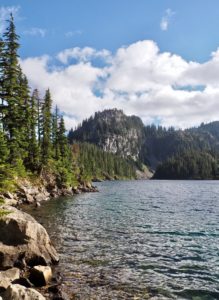 This arduous series of trails rewards with eye-popping views and varied combinations of destinations from Rachel Lake’s sapphire waters to Alta Mountain’s sweeping vista.  Start early or camp overnight to experience all in one outing or make return trips to alternate points of interest.  Lined by the prominent row of peaks that form Box Ridge (including the curiously named Hibox, Lobox, and Nobox mountains), the trail climbs upper Box Canyon to its headwall formed by the adjoining Rampart Ridge.  Along the way, it crisscrosses Box Canyon Creek and its many tributaries tumbling from the ridgetop lakeland that includes Rachel, Rampart, and Lila lakes.  The canyon’s scrubby, old-growth forest is punctuated by flower-dotted meadows, waterfalls, and broadening views.  Appropriate footwear is required, as the well-worn trail is reduced to woven roots and cobbled boulders in some portions whilst skipping streams by stones and logs at others.  The trail is also quite steep where it climbs the canyon headwall to Rachel Lake and again on its final ascents to Rampart Ridge and the summit of Alta Mountain.  Nevertheless, Rachel Lake is one of the most popular hiking destinations in the area — be prepared to share its shore with a number of other hikers and consider pressing onward to Rampart Lakes, Lila Lake, or Alta Mountain for a more intimate experience.

While the steeply pitched trail to Alta Mountain requires no climbing expertise, the peak’s stunning, 360-degree panorama does come with some risk associated with high elevation.  A short section of the trail skirts a cliff’s ledge where falls could be deadly and hikers are cautioned not to attempt the summit at all when snow is present. 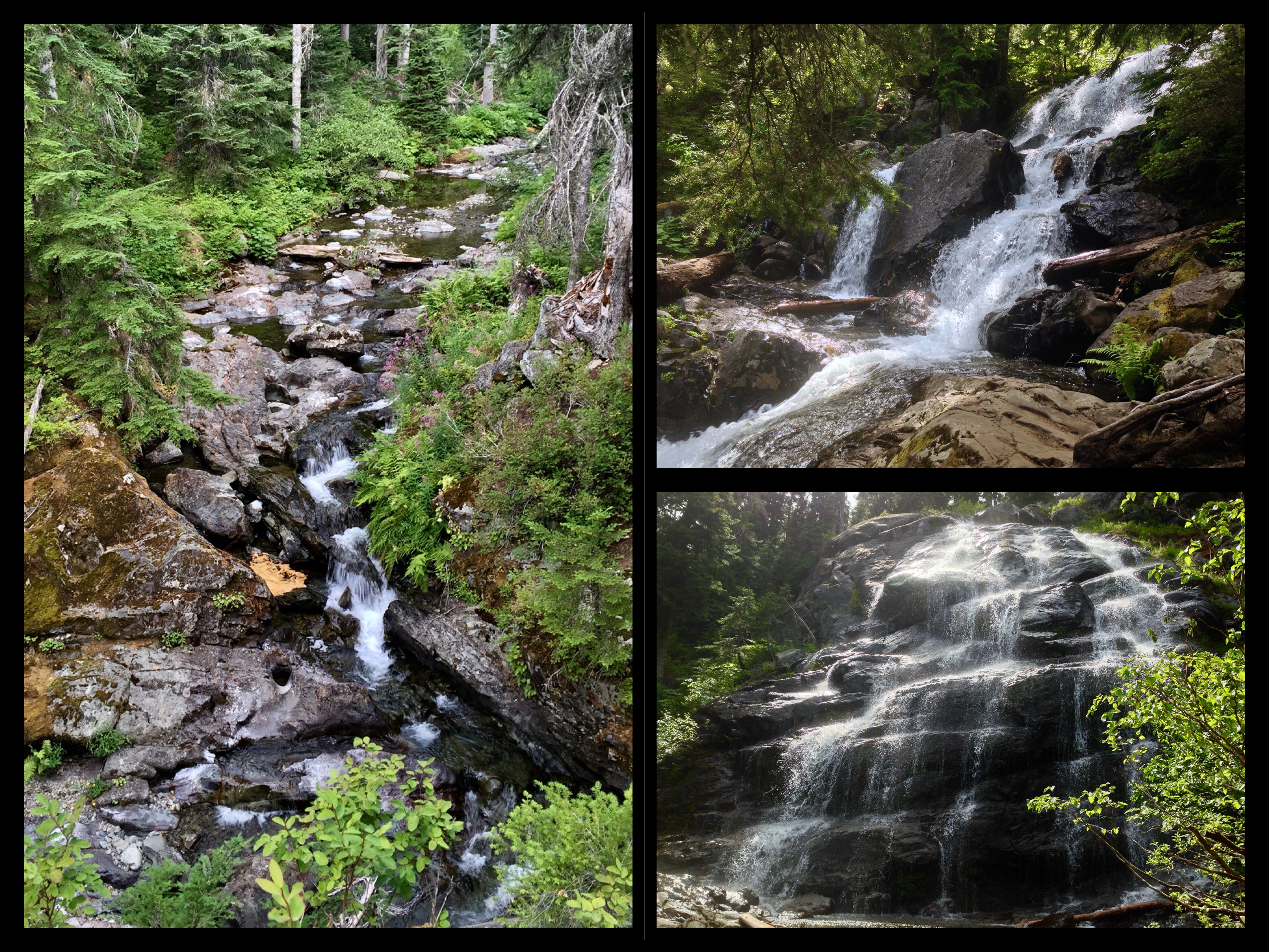 The trail generally follows — and crisscrosses — Box Canyon Creek and its many tributaries, passing several waterfalls along the way. Although none of the waterfalls has an official name, given that they were unnamed at the creation of the Alpine Lakes Wilderness and now remain nameless to help preserve its wild character, some have received unofficial designations, such as Alta Basin Falls (upper right) and Lila Falls (lower right), both of which cross the trail in their descent.
Rachel Lake Trail, July 18, 2014 and August 02, 2015. 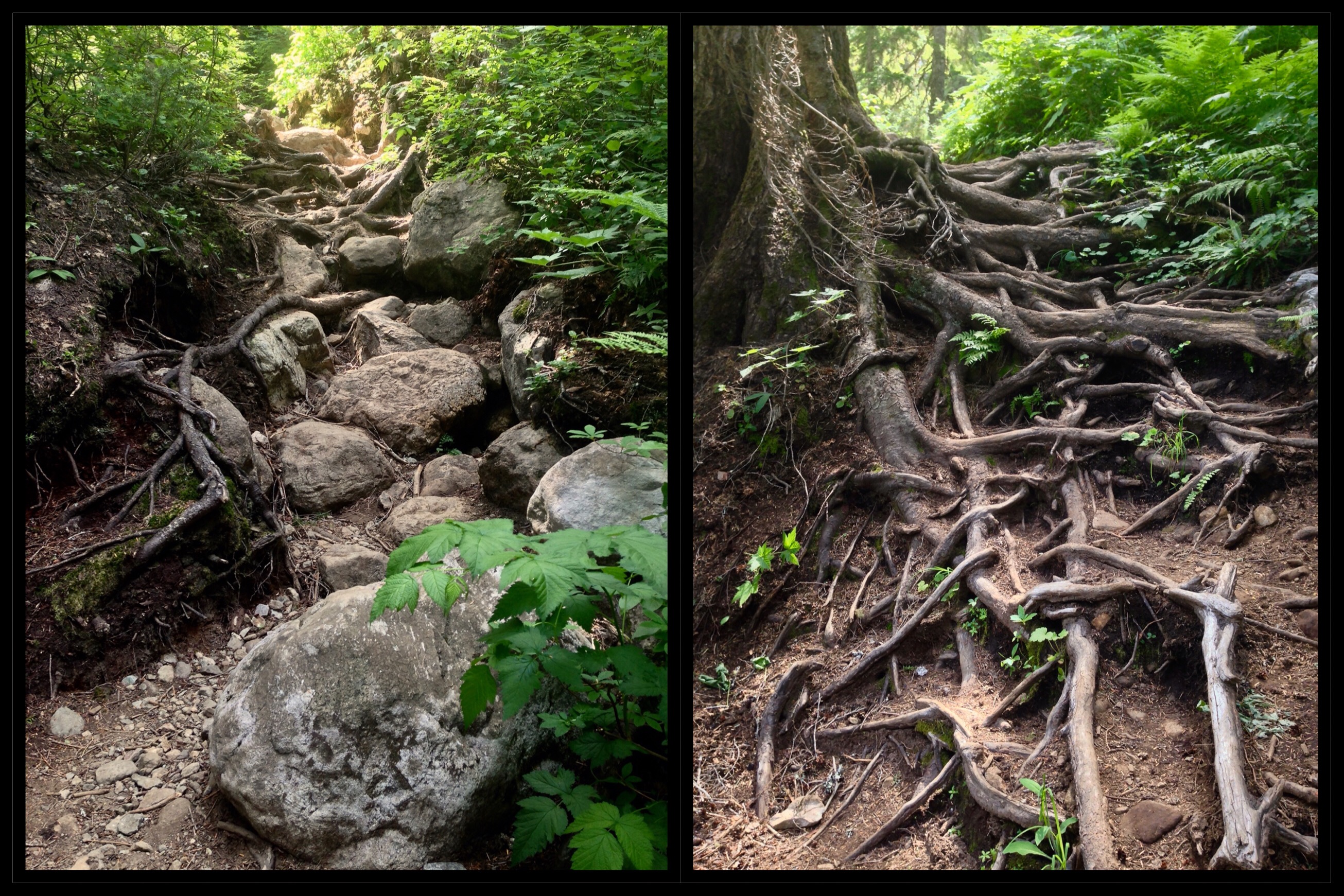 Legion footfalls on this popular trail have worn it down to its bouldered and root-writhen foundations. Exercise care — especially when descending — and be prepared with appropriate footwear and other trekking gear as needed. Rachel Lake Trail, July 18, 2014. 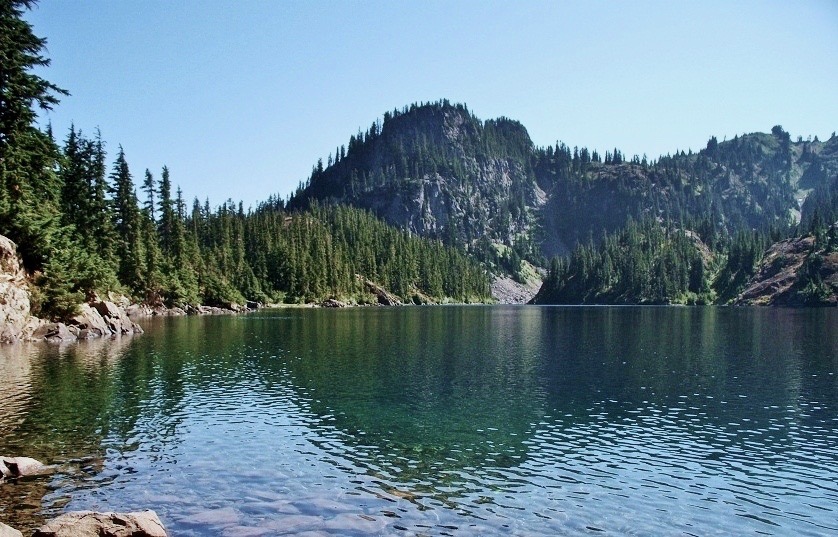 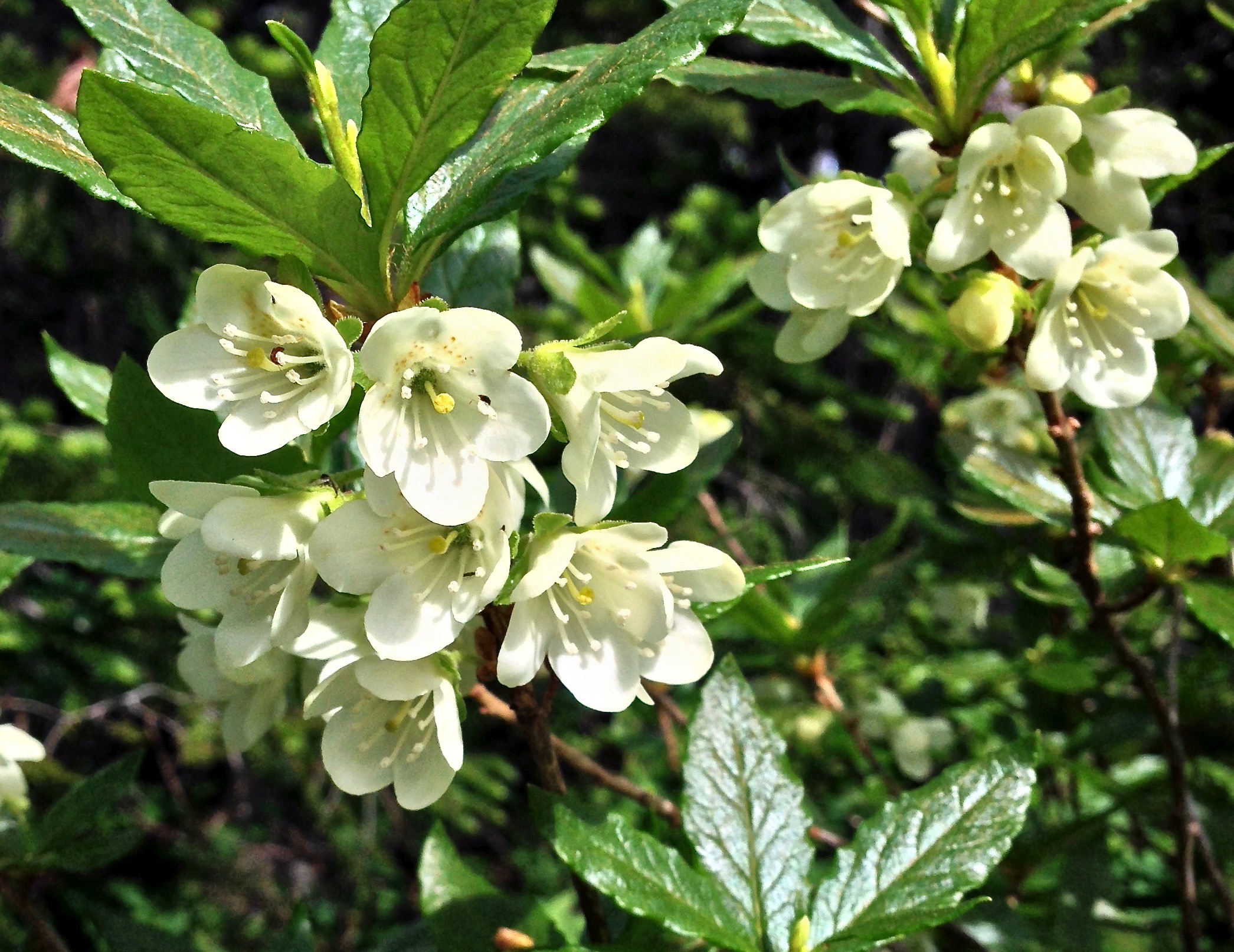 Rachel Lake is a prime location to enjoy one of the Pacific Northwest’s native rhododendron species, the white rhododendron, also known as the Cascade azalea (Rhododendron albiflorum), which blooms in fragrant drifts throughout the lakeside woodland. Rachel Lake Trail, July 18, 2014.

Beyond Rachel Lake, the trail climbs — steeply — up what appears to be the very unassuming edge of Rampart Ridge, but don’t be deceived — the extra effort is rewarded with spectacular views. From atop the ridge, short trails branch to Rampart Lakes, Lila Lake, and Alta Mountain.
Rachel Lake Trail, September 01, 2018.

As the trail ascends Rampart Ridge (right), Rachel Lake quickly recedes into the distance below. Hibox Mountain, Lobox Mountain, and Mossy Slab rise on the opposite side of Box Canyon (left).
Rachel Lake Trail, August 02, 2015. 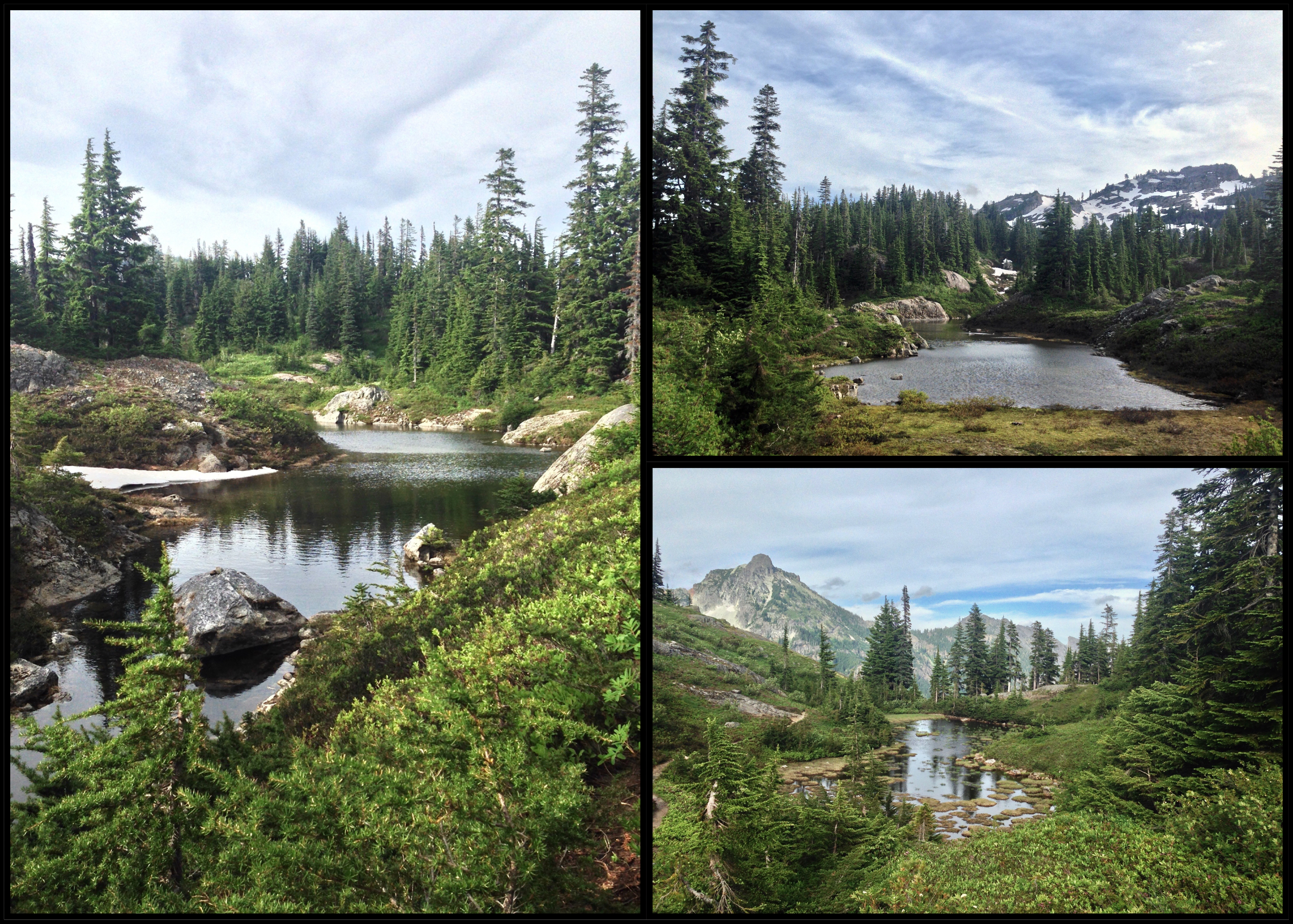 The right fork from the trail junction at the top of Rampart Ridge leads approximately 0.75 miles/1.20 km over a low ridge to Lila Lake and its uniquely shaped islet, nestled below Box Ridge’s trio of peaks, Nobox Mountain (rather comically, even if unofficially named to designate it as the most northerly of the three) (left), Hibox Mountain (center), and Lobox Mountain (right). Lila Lake Trail, September 01, 2018.

The trail to the summit of Alta Mountain departs the Lila Lake Trail near the low ridge overlooking the lake and climbs the narrow saddle linking the mountain to Rampart Ridge. In this southward view, Rachel Lake is visible on the left below Rampart Ridge and the Rampart Lakes lie cradled atop the ridge on the right. Alta Mountain Trail, August 02, 2015. The upward view from the trail traces its path to the summit of Alta Mountain along the massif’s rugged spine. Alta Mountain Trail, August 02, 2015. To the northeast of Alta Mountain, the peak known as Three Queens rises beyond Box Ridge. It is named for its crown of triple spires, which, from this vantage, appear as one.
Alta Mountain Trail, September 01, 2018. To the southeast, the view from the summit retraces the trail’s now distant passage down Box Canyon and on to Lake Kachess beyond. Alta Mountain Trail, August 02, 2015. 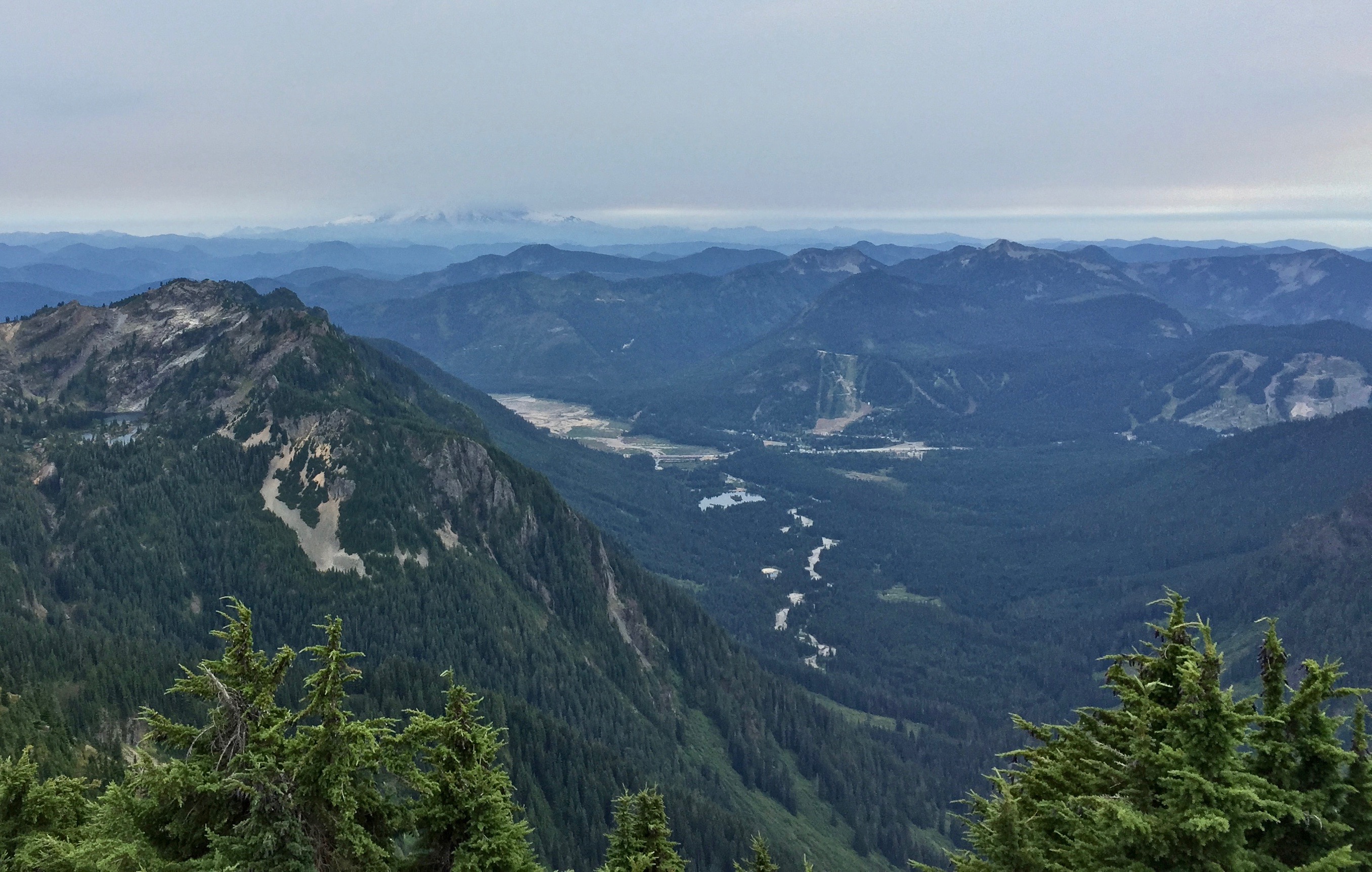