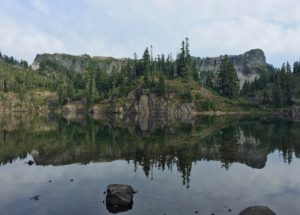 A 360-degree panorama radiates from Table Mountain, encompassing Mt. Baker, Mount Shuksan, Mount Herman, and the crinkled landscape of surrounding ridges and valleys.  In contrast to its rugged neighboring peaks, Table Mountain is a flat-topped, roughly L-shaped massif thought to be the remains of a lava lake.  Curious patterns in its stone attest to its formation from a molten state.  The Chain Lakes Loop trail circles the mountain, with a short side trail up to its prominent eastern pinnacle.  The 2.00-mile/3.20-km loop trail around Bagley Lakes may be hiked separately or as part of the overall loop, extending its round-trip distance to approximately 8.00 miles/12.90 km.  Consistent with its name, the loop trail links a series of lakes (sometimes called the Galena Chain Lakes) strung around the foundations of Table Mountain’s imposing walls, with either Mt. Baker or Mount Shuksan — or both — nearly always in sight.

The loop trail can be hiked from either Austin Pass or Artist Point, both of which provide ample parking and are linked by the steep, Wild Goose portion of the trail.  (The Wild Goose Trail can be difficult to discern in places, especially where it is intersected by Highway 542 and many crisscrossing footpaths.  When uncertain, look for mortared stone cairns marked with blue and white badges depicting a goose in flight to guide the way.)  This profile begins at Austin Pass and proceeds clockwise up the Wild Goose Trail, taking a side jaunt to Table Mountain’s topside.  The easily accessed loop trail is not as heavily trafficked as one might expect from the crowded parking lot and footpaths around Artist Point, which afford stunning views in their own right; nevertheless, one will periodically encounter other hikers and campers along the way.  The steep and potentially vertigo-inducing side trail to the top of Table Mountain is even less travelled. 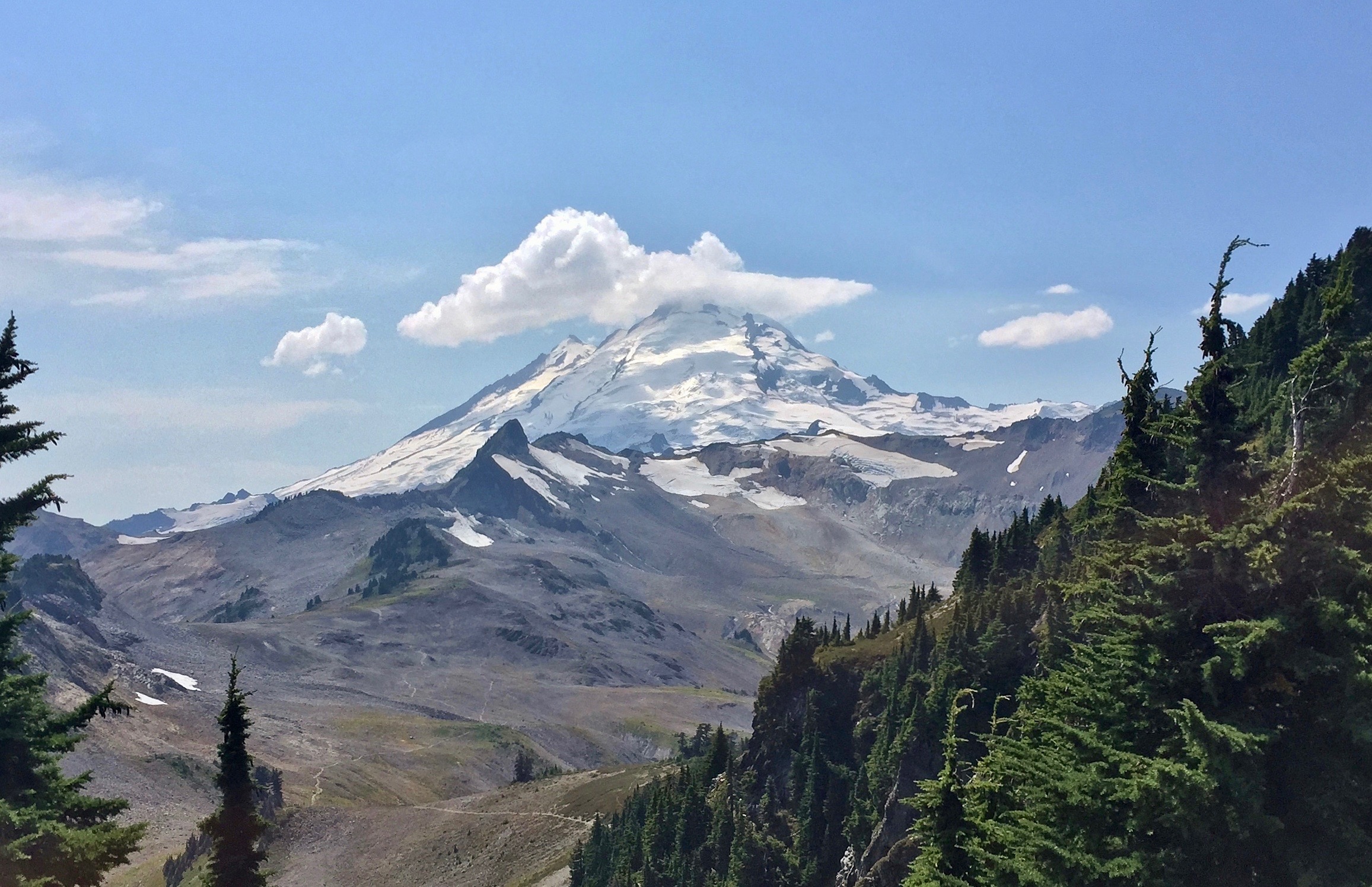 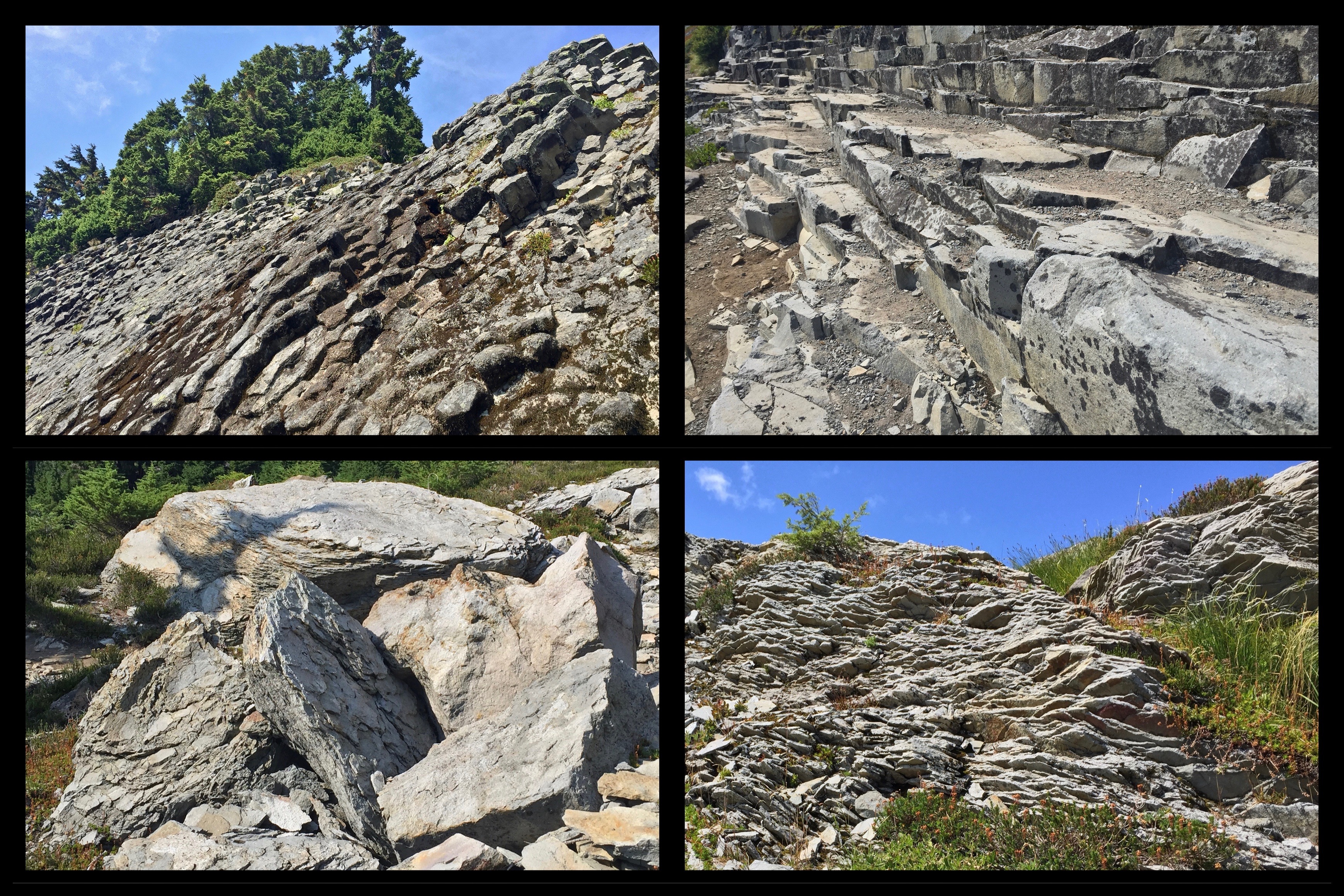 The Table Mountain Trail, in some sections very narrow and presenting some exposure, winds up and around the mountain to its eastern prominence, affording grand views of Mount Shuksan reclining majestically on the horizon. Here, the parking lot at Artist Point is visible far below.
Table Mountain Trail, August 10, 2015. Although it appears flat from a distance, the surface of Table Mountain is a vast wasteland of heaped boulders and loose, tile-like scree, punctuated by sandy tarns that often dry up in the summer months. Beyond the mountain’s eastern peak, trails disappear into the shifting stone, rendering further progress difficult. Table Mountain Trail, August 10, 2015. 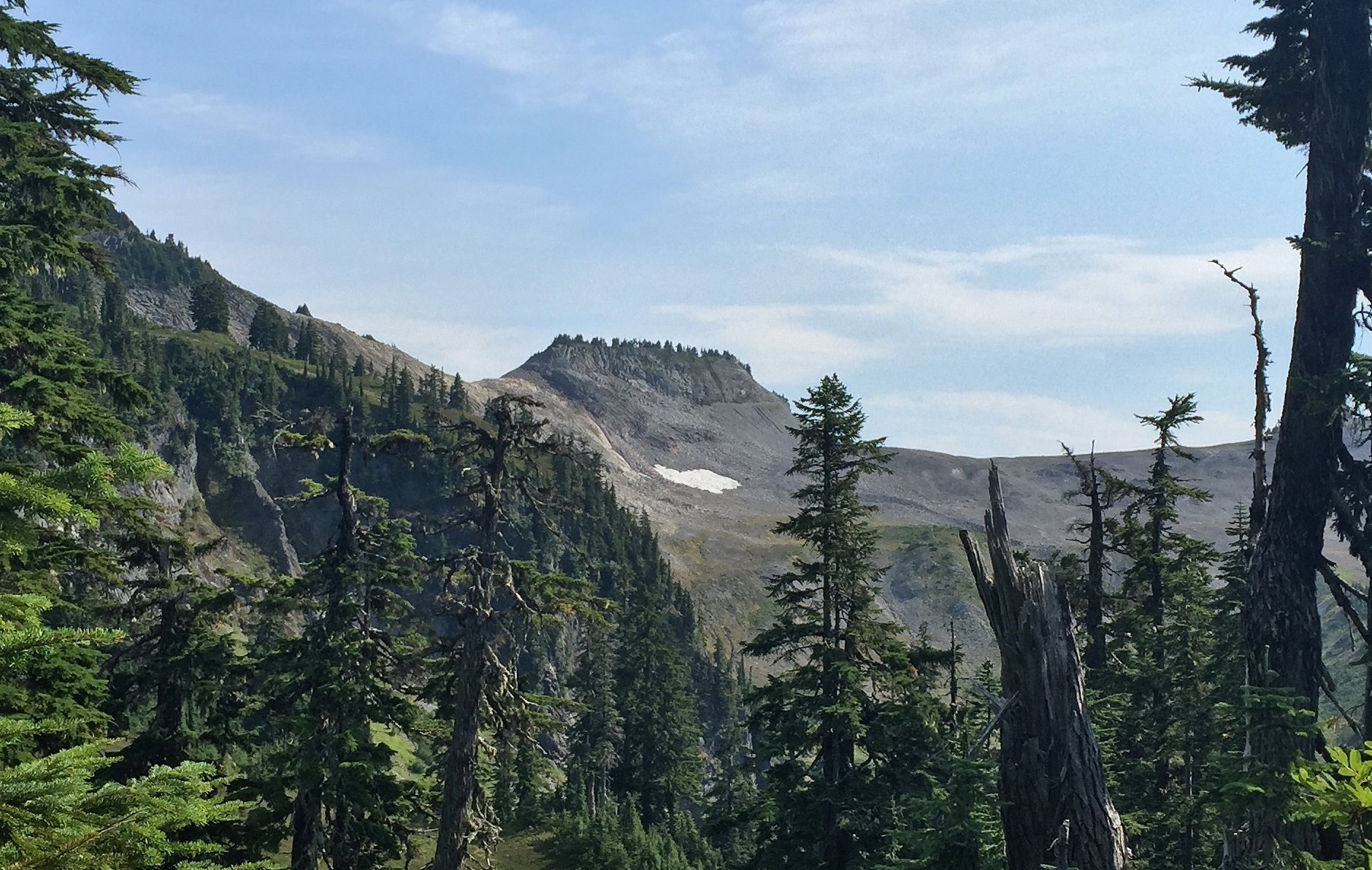 Moisture and greenery return to the landscape near Mazama Lakes, first in the series of lakes encountered in a clockwise circuit of Table Mountain. Chain Lakes Loop, August 10, 2015. 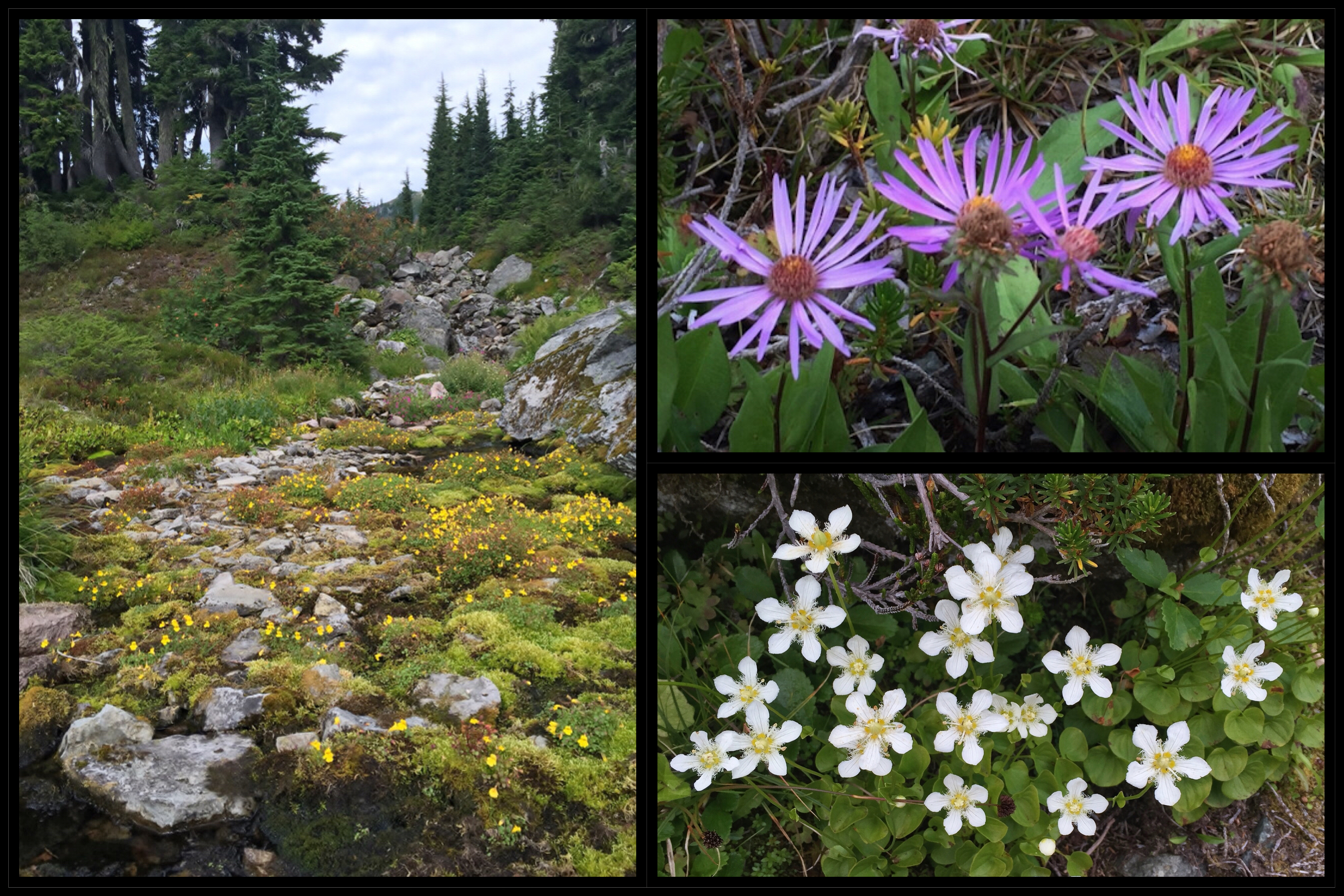 The loop trail crosses the narrow strip of land between Iceberg Lake and Hayes Lake before ascending Herman Pass. A side trail leads to the far end of Hayes Lake, beyond which unofficial boot paths may be followed with some difficulty to neighboring Arbuthnot Lake. Here, Mazama Dome unites with its own reflection on Hayes Lake to form a stony orb. Chain Lakes Loop, August 10, 2015. 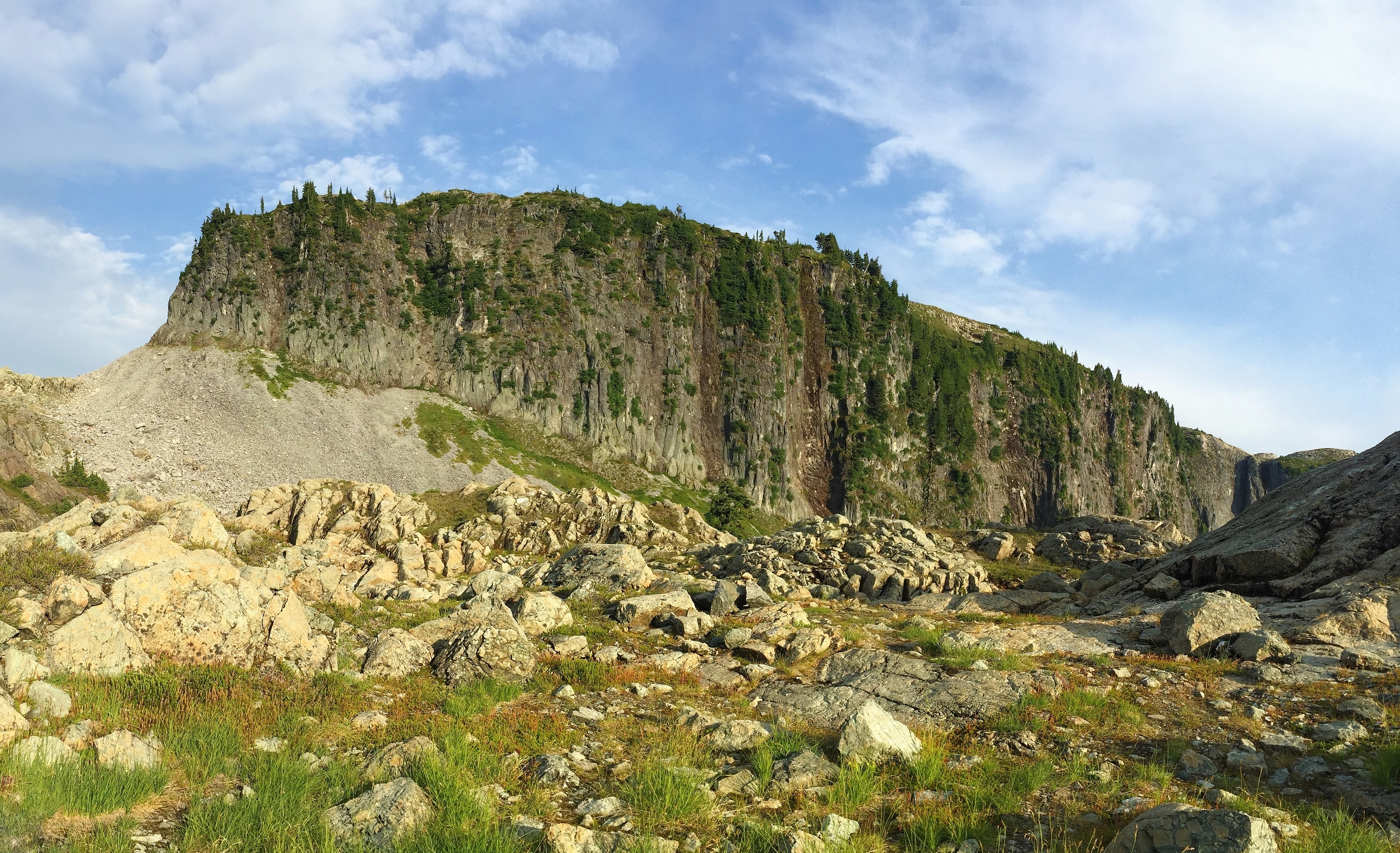 From the Herman Saddle, the great columnar joints in the hardened lava that forms Table Mountain are visible in the vertical striations along its northern tip. Chain Lakes Loop, August 10, 2015. 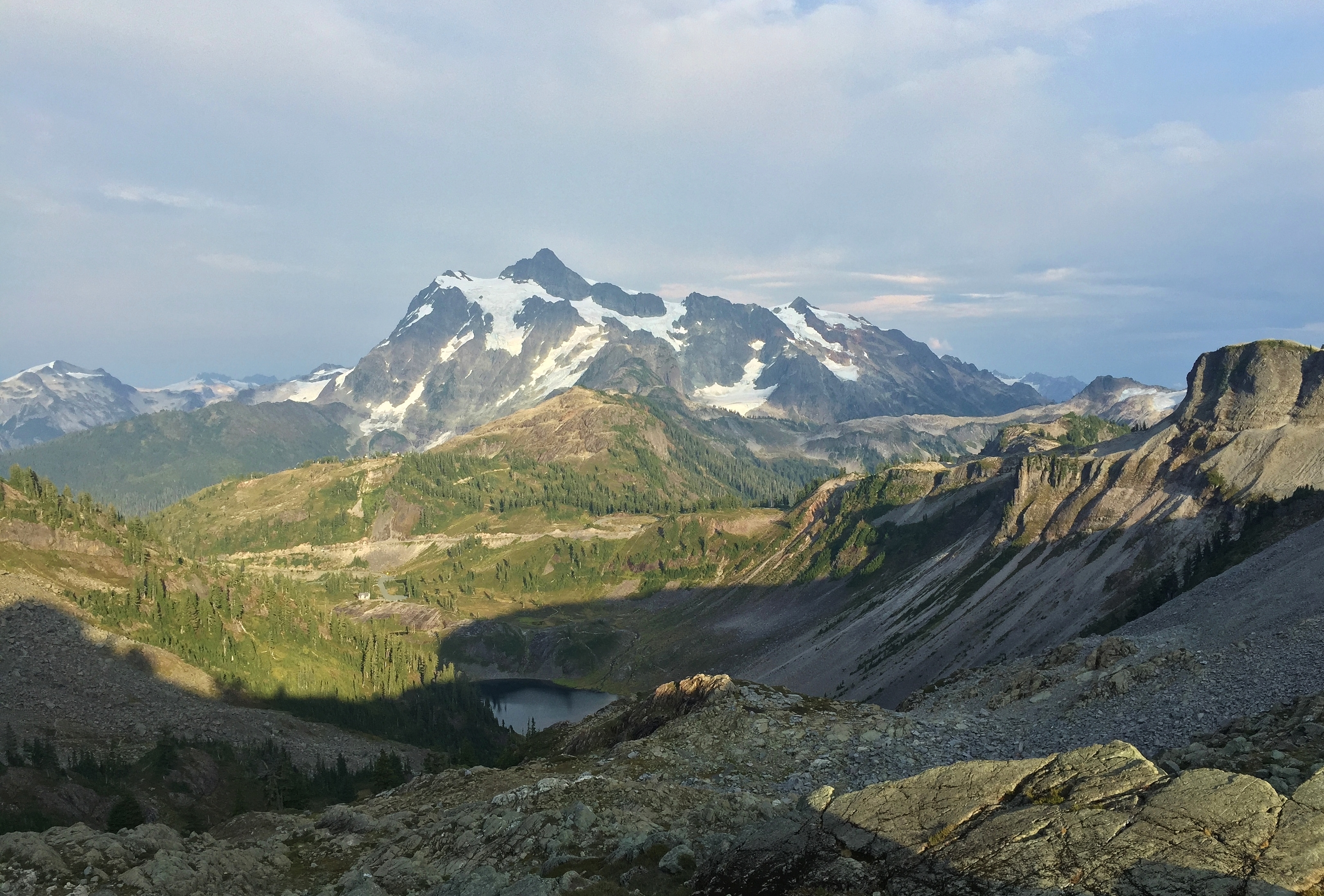 Where the trail descends the opposite side of Herman Pass and into the Bagley Lakes Basin, vast talus slopes fan down from Table Mountain’s eastern ridge as Mount Shuksan returns to view. Chain Lakes Loop, August 10, 2015. 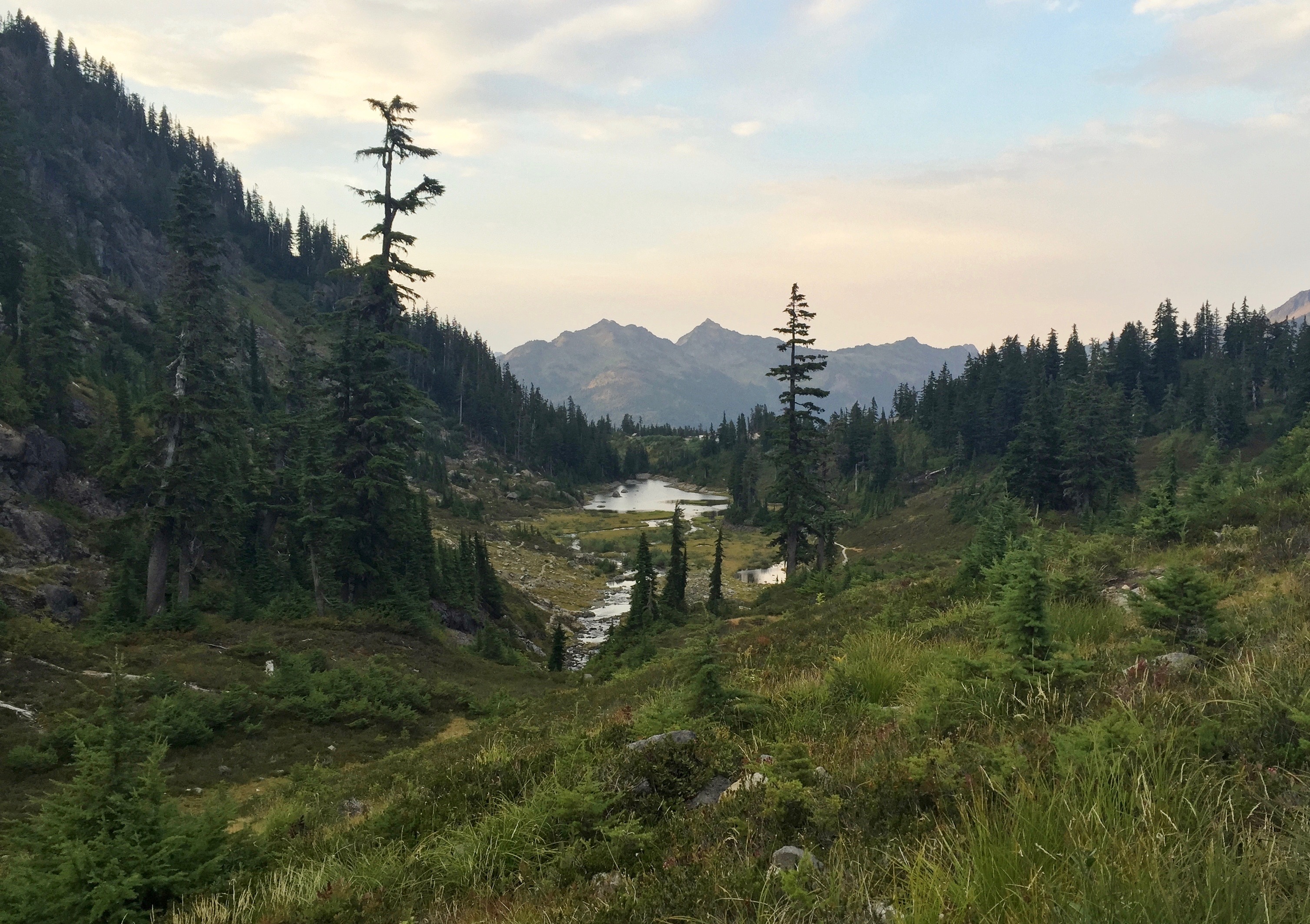 Near the trail’s end, eventide settles on the Bagley Lakes and softly illuminates Goat Mountain and Point 6891 beyond. Chain Lakes Loop, August 10, 2015.