The Carbon River Trail accesses one of Mt. Rainier National Park’s lesser known wonders:  the only rainforest within the park and one of the last stands of old-growth inland rainforest in the Pacific Northwest.  Although temperate rainforests are common along the coast where precipitation is most abundant, the Carbon River Valley’s unique geography and weather patterns create conditions that sustain a rainforest at the very foot of Mt. Rainier.  Many of its venerable giants have stood for near a thousand years.  Wander amid their shadowy columns and explore side trails to several features along the way, including an interpretive boardwalk loop, an old mine shaft, a gem-tinted lake, and thundering waterfalls. Here and there, marvel at how the river’s capricious roving alters the surrounding landscape when its waters run high.  Other than the occasionally passing hiker or biker, little else breaks the woodland hush but the twittering of birds and river’s meandering murmur.  Do be aware of your surroundings and prepared to encounter bears and other wildlife that are at home here and throughout the park. (Information about wildlife safety can be found on this site’s “Resources” page under “Safety and Preparation.”)

The main trail is the remnant of a gravel road that, at one time, provided vehicle access from the park’s northwestern corner to the Ipsut Creek Campground and the Carbon Glacier from which the river is born.  However, the river’s extensive flooding over the years repeatedly washed out portions of the road, rendering it too costly to maintain other than for foot-powered traffic.  The road is now closed to vehicle use beyond the park boundary, offering several hiking options of various lengths and levels of difficulty.  Although bikes are not permitted on the side trails or beyond the campground, the Park Service has installed convenient bike racks along the way to facilitate quicker access to those wayside features.  Given the number of side trails that may be hiked singly or in combination from the main trailhead, the round-trip distances above are given for each individually.  Just beyond the campground, the trail joins the park’s Wonderland Trail that circles Mt. Rainier, providing access to points beyond, including the Carbon Glacier, Tolmie Peak, Eunice Lake, and Mowich Lake.  To plan your hike, be sure to print or download the park trail map at the “Additional Trail Info” link above. 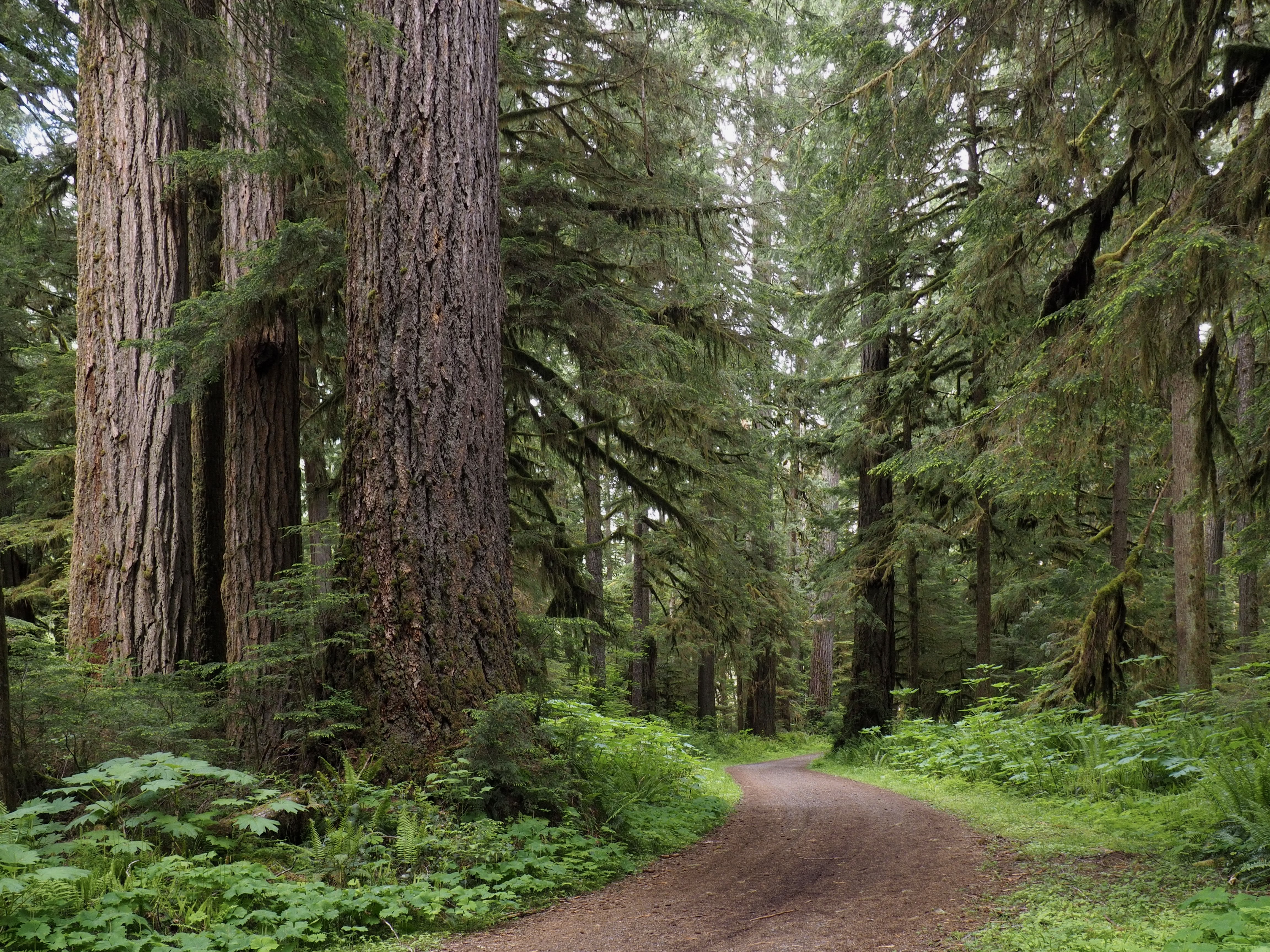 The flat Carbon River Trail permits an easy stroll through misty, old-growth rainforest garbed in moss and ever within earshot of its namesake’s rushing waters. The Carbon River Valley contains the only rainforest within Mt. Rainier National Park and one of few remaining patches of North American rainforest inland and apart from their more common coastal ranges. Carbon River Trail, June 11, 2017. The main trail generally parallels the Carbon River, which, rather than flowing in a single stream, consists of several braided strands across its flat, flood-prone valley. At times, the river runs milky with silt ground from stone by the glaciers above, which, as it deposits, alters the river’s ever-shifting channels. Here, the river zigzags below Chenuis Mountain’s Tirzah Peak.
Carbon River Trail, June 07, 2015. 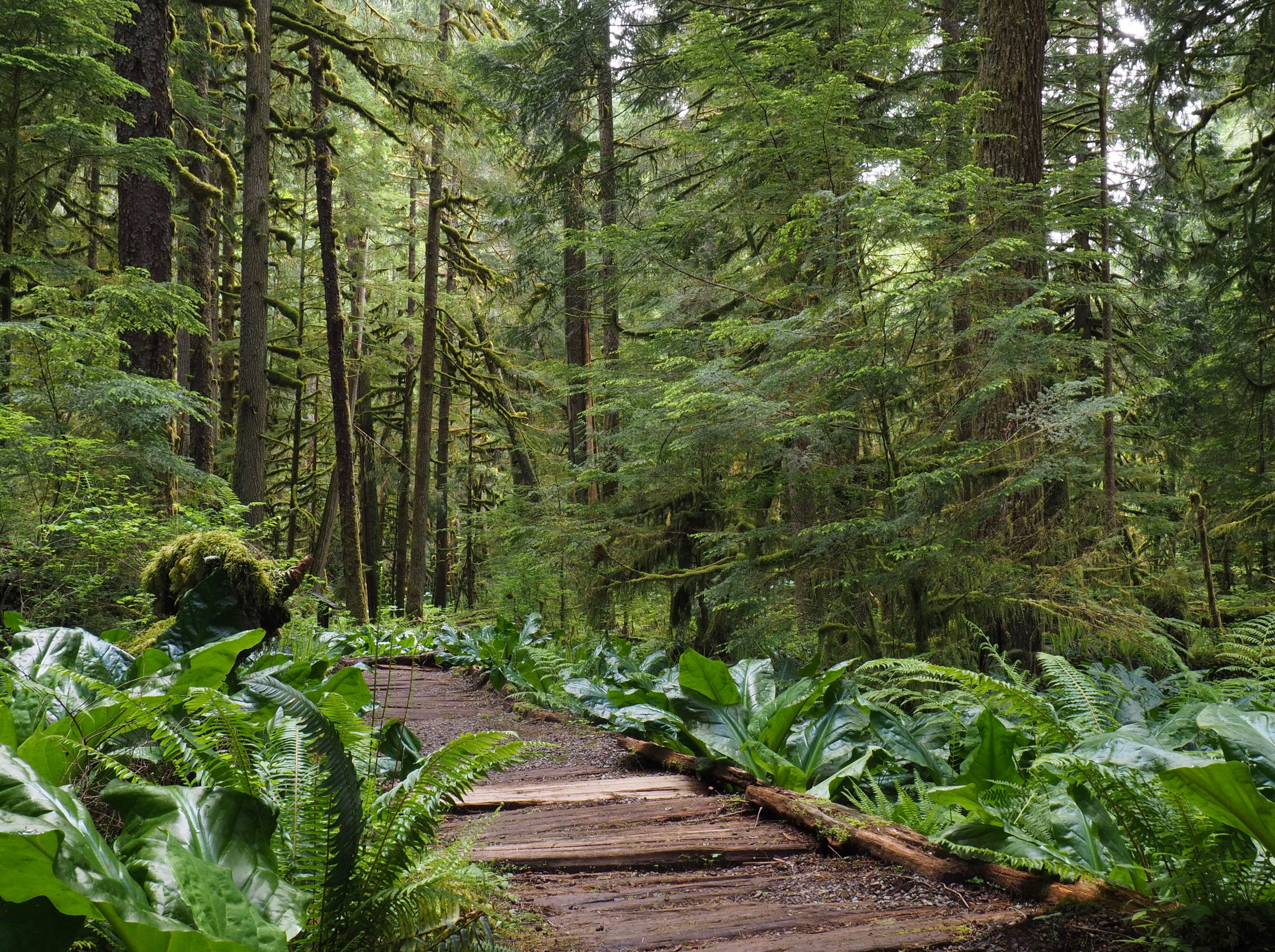 At approximately 1.30 miles/2.00 km from the main trailhead, the Old Mine Trail, marked only by a very small sign, leads to the right from what used to be a small parking area. The 0.30-mile/0.50-km trail is relatively flat until it reaches the edge of the river valley and then climbs steeply to its abrupt end at the entrance of an abandoned mine shaft. Carbon River Old Mine Trail, May 11, 2014. Leading a short distance directly into the mine shaft, the Old Mine Trail provides an eerie view down its gorge. The shaft was likely bored by the Washington Mining and Milling Company around 1910. Although local lore refers to it as a copper mine, sources suggest that the company dug thirty-odd shafts in the area to explore for gold and silver as well – and as cover for illegal logging operations within the park. No significant minerals being struck, the company gave up its mining claims in the park within a few years. Carbon River Old Mine Trail, June 11, 2017. 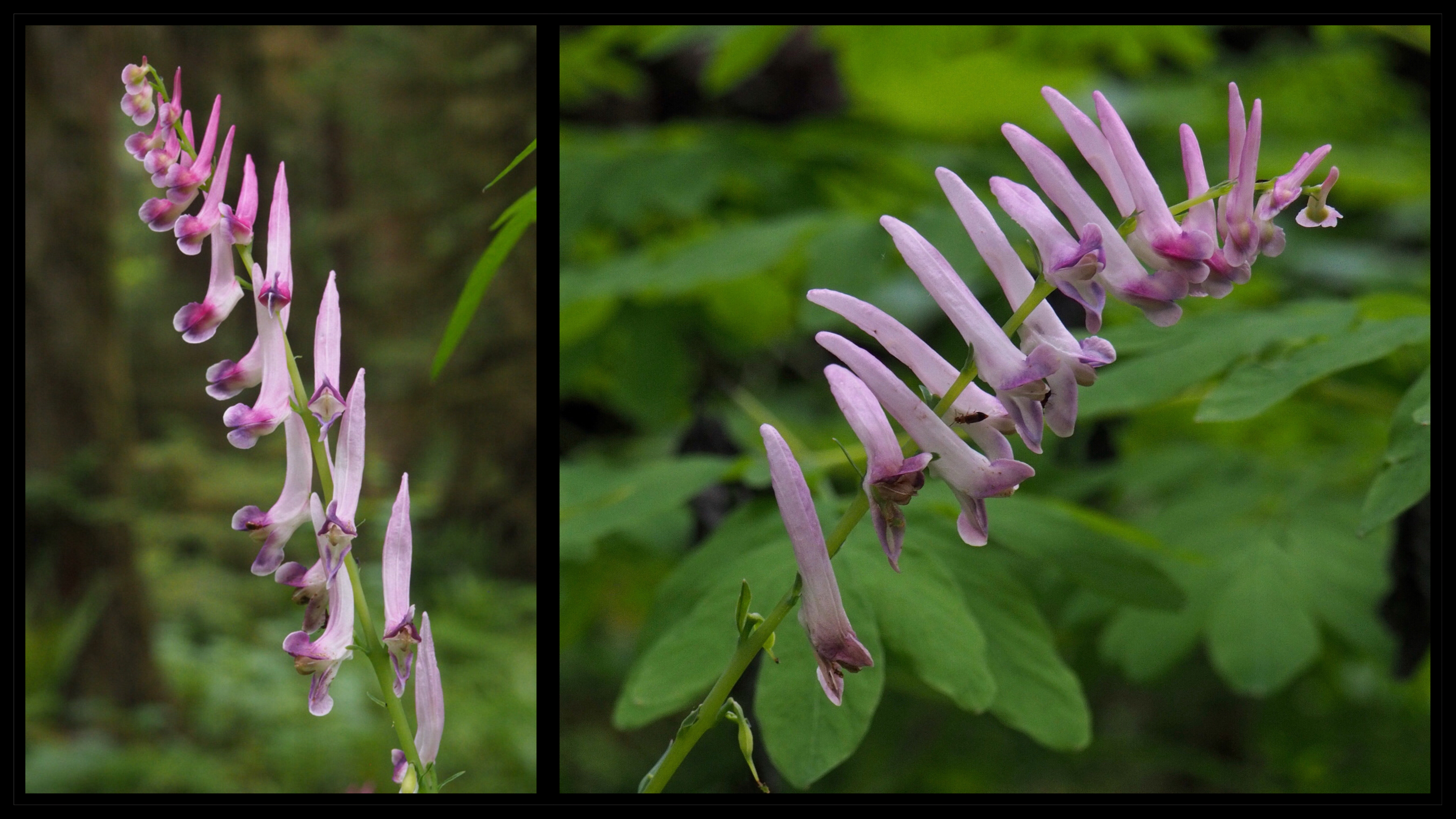 The floral star of the spring rainforest is the delicate, yet nearly alien-looking Scouler’s corydalis, or, Scouler’s fumewort (Corydalis scouleri), which blooms in knee-high banks along the main trail and the Old Mine Trail. Carbon River Trail, June 11, 2017. At approximately 3.30 miles/5.30 kilometers from the main trailhead and just beyond sight of Tirzah Peak, the 1.50-mile/2.40-km side trail to Green Lake begins on the right where Ranger Creek intersects the Carbon River Trail. The side trail climbs moderately through old-growth, coniferous forest replete with ancient giants. Some Douglas fir (Pseudotsuga menziesii) along the trail are known to be over eight hundred years old. Carbon River Green Lake Trail, June 25, 2018. Several toppled titans span the side trail to Green Lake, topped by seedlings of the next generation. Carbon River Green Lake Trail, June 25, 2018. 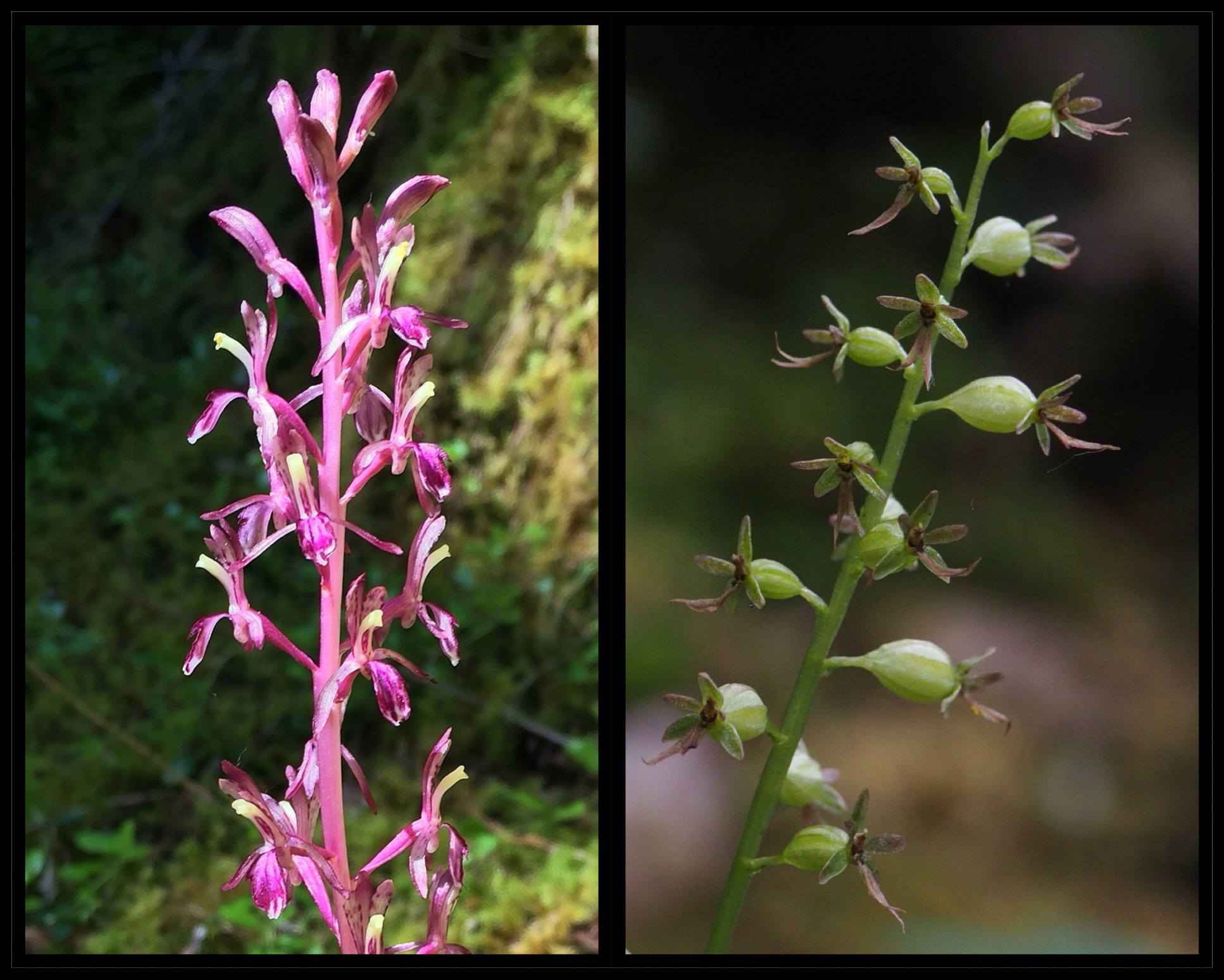 Pacific Northwest orchids thrive in the trailside rainforest. Resplendent in shafts of sunlight, Pacific coralroots (Corallorhiza mertensiana) nevertheless bloom directly from the forest floor without the aid of leaves, chlorophyll, or light by subsisting solely on fungi in the soil (left). By contrast, their tiny green relatives, the heart-leaf twayblades (Listera cordata), appear nothing but chlorophyll and spring from single pairs of namesake leaves below their slender stalks (right).
Carbon River Trail, June 07, 2015 and June 11, 2017. At approximately 3.80 miles/6.10 km from the Carbon River trailhead, the side trail to Chenuis Falls leads left toward the river. When not washed out by high water, log bridges span the various river streams along the 0.25-mile/0.40-km side trail, which generally disappears into the vast gravel bar that is the riverbed. After crossing the first bridge, angle downstream and listen for Chenuis Falls rushing just beyond the forest hem. Carbon River Chenuis Falls Trail, June 07, 2015. 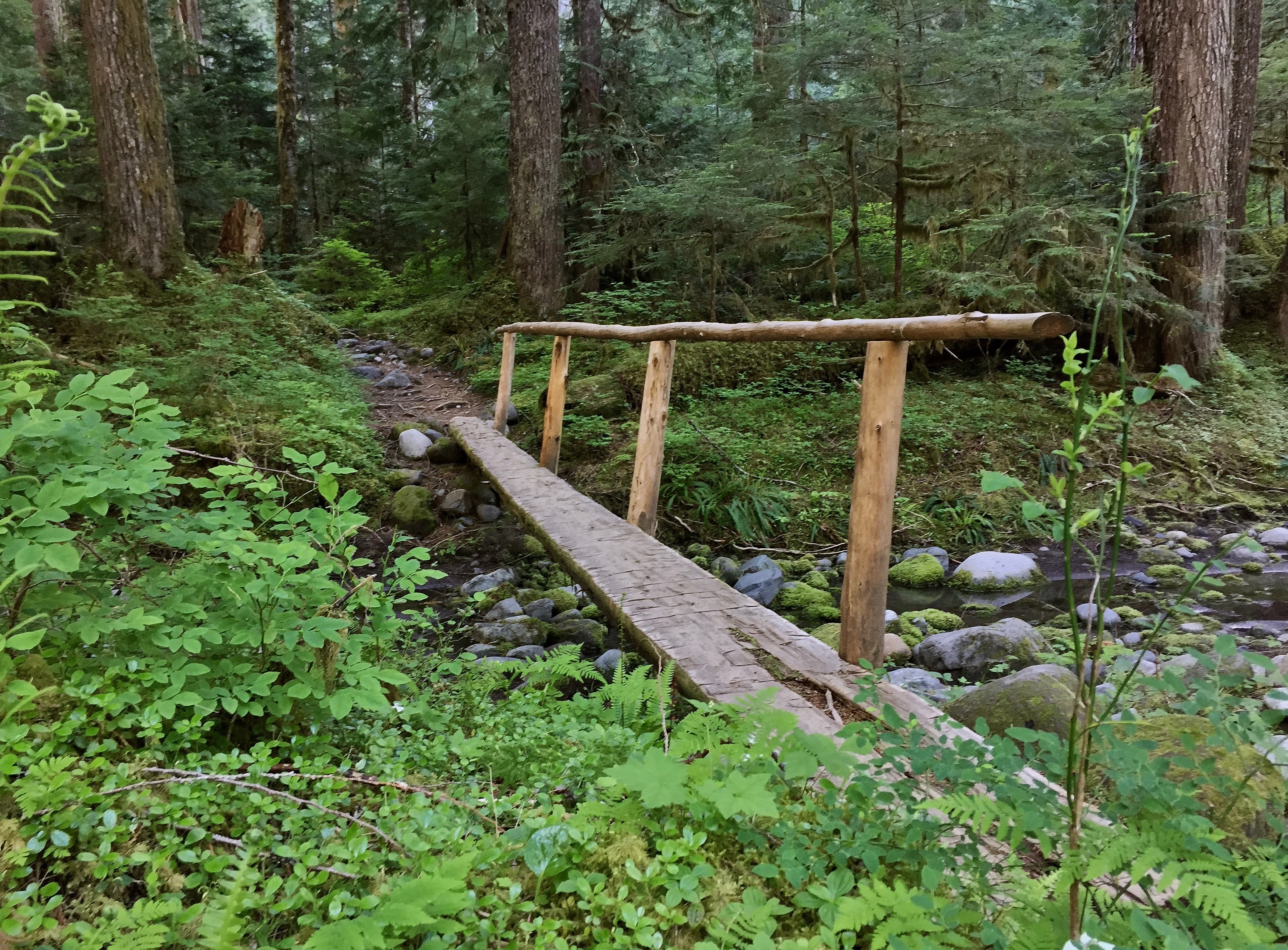 Beyond the Ipsut Creek Campground, the trail continues into deep forest approximately 0.30 miles/0.50 km toward the side trail to Ipsut Falls and on to its junction with the Wonderland Trail. Here again, access may be limited when the creek’s own rampages sweep away the log bridges spanning its many channels. Carbon River Trail, June 07, 2015.