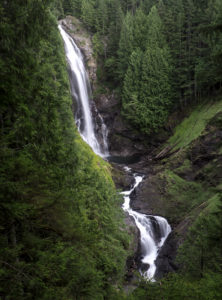 Interconnecting hiking and biking trails crisscross Wallace Falls State Park, which, given their low elevation, are hikeable year round.  The highlight of the park is its series of magnificent waterfalls along the Wallace River, collectively grouped as Lower, Middle, and Upper Wallace Falls.  Except for specific vantage points and an unfortunate clear-cut on adjoining Department of Natural Resources land, the trails are completely ensconced in dense, moss-laden. second-growth forest.  In mid-winter, the low-arcing sun seems ever rising or setting and never quite breaches the shadowy mountain forests and folds that hedge the trails.  However, the falls are at their picturesque peak in winter and spring when abundant rainfall and snowmelt swell the plunging Wallace River.

Although all the park’s trails provide varied access to Wallace Falls and Wallace Lake, the two hiking-only trails provide the most direct access to each:  the Woody Trail to the top of the falls and the Greg Ball Trail to the lake.  Joined by the Upper Grade, a section of gravel road open to both hikers and bikers, the Woody and Greg Ball trails can also be hiked as a loop that encompasses both the falls and lake (including the side trail to the far end of the lake, where the view is best).  To help navigate the many trail junctions, be sure to download or print the park map from the Washington State Parks site above before setting out.  Do note that, although short, the Woody Trail climbs quite steeply to the top of the falls.  Resist temptation to venture off trail or to cross the wooden barriers at overlooks, as the river’s precipitous gorge just beyond has proven deadly.  Given the Woody Trail’s relative ease of access, it is also quite popular year-round; however, the Greg Ball Trail, Upper Grade, and other park trails provide a balanced respite from the crowds.

The trails are named in honor of men who supported trail construction and maintenance:  Senator Frank Woody and Greg Ball. 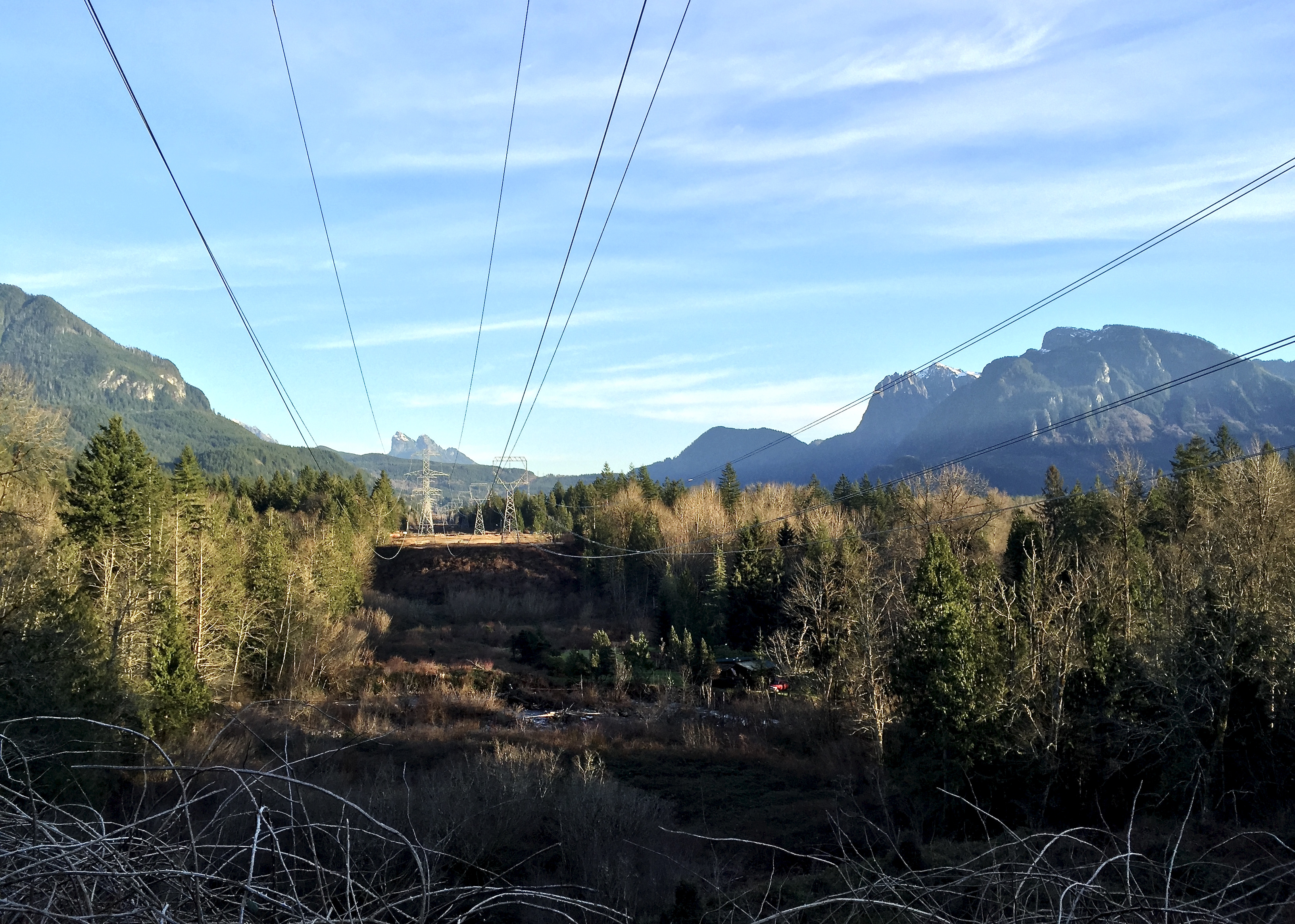 The trail begins in a vast swath slashed through the lowland forest to make way for heavy spans of power lines conveying electricity from the distant Columbia River. Marring the vista as they do, this dramatic view of Mounts Baring, Philadelphia, Index, and Persis (from left to right) would not exist but for the power lines’ demand for space. Wallace Falls State Park, February 15, 2015. Not to be outdone by its larger riverfellows, a small, unnamed stream just 0.50 miles/0.80 km from the trailhead cheerily tumbles down Small Falls in its hurry to join the Wallace River. Beyond Small Falls, posted signs along the 0.25-mile/0.40-km Small Falls Interpretive Trail highlight the indigenous Skykomish people’s connection to their ancestral lands around the park. The loop trail also leads to a fire pit and semi-circle of benches called the Small Falls Amphitheater.
Small Falls Interpretive Trail, Wallace Falls State Park, April 02, 2017. 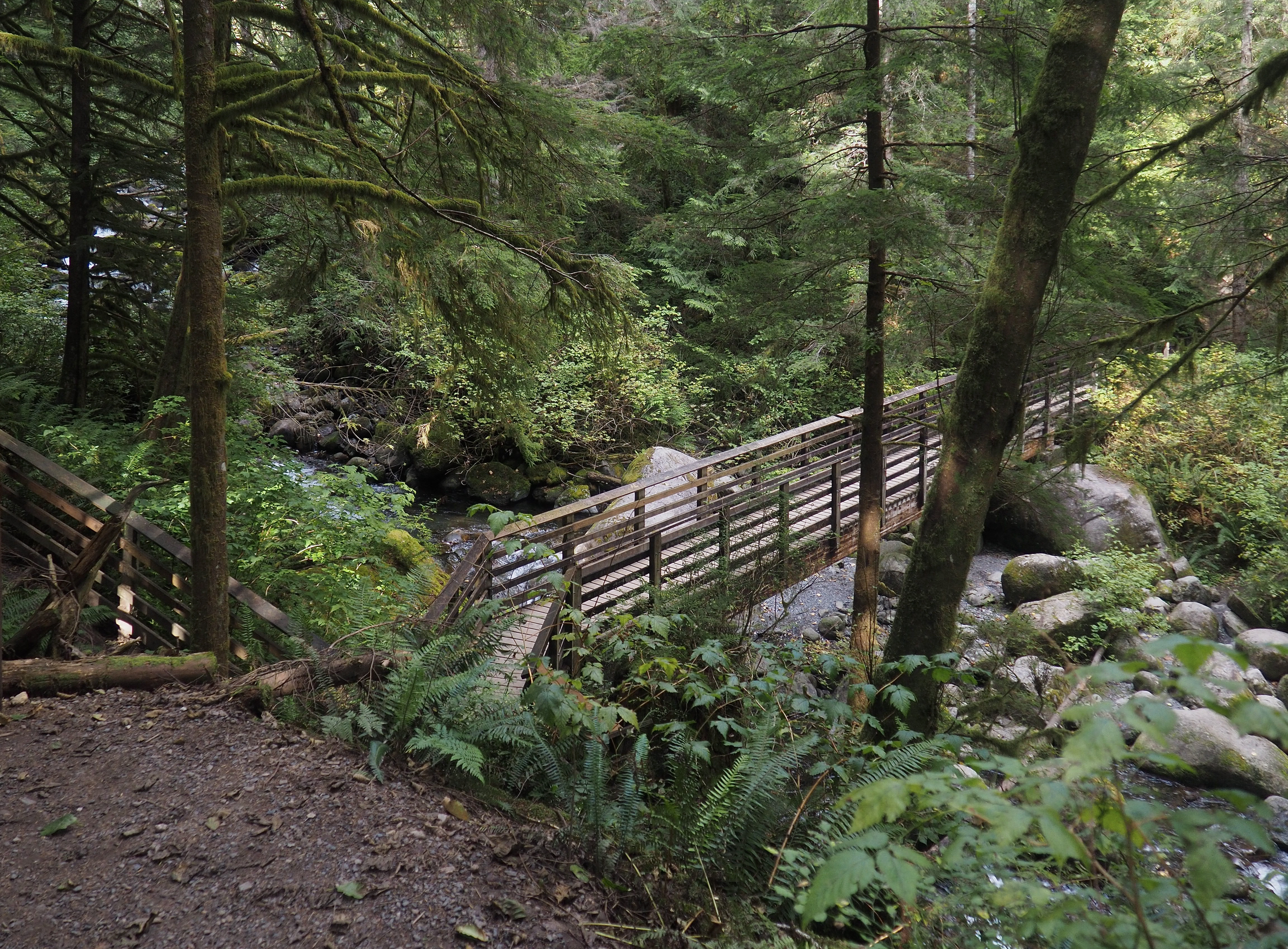 At approximately 1.50 miles/2.40 km from the trailhead, the North Fork Wallace River joins the Wallace River’s main fork. Above the river junction, a connecting trail branches left from the Woody Trail to the Old Railroad Grade again and, shortly, to the Greg Ball Trail, which forms the western section of the park’s trail loop and generally follows the North Fork Wallace River to Wallace Lake. The Woody Trail crosses a bridge over the north fork and continues east to the falls along the main fork of the Wallace River. Woody Trail, Wallace Falls State Park, September 11, 2016. In addition to spectacular views of the falls, the Woody Trail also offers westward glimpses of the Skykomish River Valley. From the Middle Wallace Falls overlook, the gaze sweeps down the valley and out to the Olympic Mountains beyond. The valley is the historic home of the Native American Skykomish people. “Wallace” is the over-Anglicized version of “Kwayaylsh,” the surname of a Skykomish couple who remained and “homesteaded” in the valley after their rights thereto were ceded to the U.S. government by treaty. Woody Trail, Wallace Falls State Park, February 15, 2015. At Middle Wallace Falls, the Wallace River plunges 265 feet/81 meters into a verdant, amphitheater-style basin before zigzagging down the remainder of the middle falls. Always majestic, its volume varies significantly throughout the seasons, from spring’s swollen torrent in this photo to autumn’s gossamer strand in the photo at the top of this page.
Woody Trail, Wallace Falls State Park, April 02, 2017. At Upper Wallace Falls, the Wallace River disappears below the trail as it begins its rapid, 800-foot/244-meter combined descent over the three sets of falls.
Woody Trail, Wallace Falls State Park, April 02, 2017. From Upper Wallace Falls, a short trail connects the Woody Trail to the Upper Grade, a gravel road that leads to Wallace Lake. From Upper Wallace Falls, look for blue plastic diamonds on the trees to mark the way through dense forest to the Upper Grade. The Upper Grade extends 1.70 miles/2.70 km from the top of the Woody Trail to the next signed trail junction and then a further 0.50 miles/0.80 km rightward to Wallace Lake. Along the way, it leaves Wallace Falls State Park and crosses land owned by the Department of Natural Resources, where clear-cut logging scars its wayside, but opens views to the Skykomish River Valley beyond. Upper Grade, Wallace Falls State Park, April 02, 2017. The forest throughout Wallace Falls State Park is still recovering from clear-cut logging in the early 1900s (long before it was a park) that reduced it to a barren expanse like the recently logged hillsides along the Upper Grade. Its progression is especially evident along the Greg Ball Trail, where, at lower elevations, the maturing woodland supports life at all levels, including a knee-high understory of sword ferns (Polystichum munitum) and middlestory of mossy vine maples (Acer circinatum)(left and upper right). At higher elevations, the young woodland’s closely woven canopy still blocks most sunlight, resulting in an almost lifeless forest floor strewn with branches and logs from the rapid die-off that occurs before it regains natural equilibrium in a more open, many-layered state (lower right).
Greg Ball Trail, Wallace Falls State Park, September 11, 2016 and April 02, 2017. Connected by short stints on gravel roads, the Greg Ball Trail and the Upper Grade converge at Wallace Lake’s log-jammed outlet to the North Fork Wallace River, where only a peek at the lake is possible. To reach the opposite end of the lake and a more expansive view, follow signage to the 0.50-mile/0.80-km road that skirts its western edge. Wallace Falls State Park, April 02, 2017. At the opposite end of Wallace Lake, the North Fork Wallace River, so boisterous after exiting the lake, lazily enters the lake’s northwestern end as a mere stream. Skip down its stones to reach the gravelly lakeshore known as “Pebble Beach” for a tranquil view of the lake, Zeke’s Hill, and, barely peering over the horizon, Mount Index. Wallace Lake, Wallace Falls State Park, February 15, 2015.