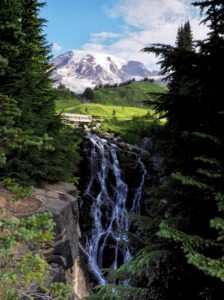 The Skyline Trail forms the backbone of a trail network that crisscrosses Mt. Rainier National Park’s upper Paradise area.  This is a land of big views skimming peaks, valleys, glaciers, and newborn rivers, as well as glimpses of the flora and fauna that exist at the edge of life on the Cascades’ highest peak.  Eleven side trails vary the hiking terrain from forest shadows to stony heights.  Between those extremes, a ribbon of verdant alpine meadows hems the frontier with a kaleidoscopic display of summertime wildflowers.  Together, these features forge the unique landscape that is Paradise.

The Skyline Trail itself is a loop that climbs — sometimes steeply — from several trailheads at the Paradise Jackson Visitor Center and Paradise Inn and, at its farthest, arcs just below the common climbing route to Mt. Rainier’s summit before descending back to the trailheads.  The separately named side trails provide options for lengthening or shortening the hike, as do the connecting and equally scenic Lakes and High Lakes trails that ring lower Paradise.  Furthermore, the Nisqually Vista Trail, Alta Vista Trail, and lower portions of the Skyline Trail are paved or gravelled, increasing accessibility to hikers of various abilities.  The best way to choose your route is to consult the Park Service’s handy trail map at one of the “Additional Trail Info” links above.

Despite their ease of access, the trails immerse hikers in wilderness immediately.  Wildlife is easily spotted, mostly deer and various smaller creatures, but sometimes also species as large as bears and mountain goats.  Although quite accustomed to humans, the animals are not tame and should not be fed or approached.  And, resist the urge to leave the clearly designated trails to snap that perfect photo, as the alpine ecosystem is delicate and, in the austere mountaintop climate, takes years to recover from damage inflicted by trampling feet.  Do expect to share the trails with other hikers, especially near the visitor center and inn, and enjoy snippets of conversation in accents and languages from around the world.  Finally, be prepared for sudden changes in the fickle mountain weather and for snow lingering on the trails well into summer.  At the “Additional Trail Info” links above, check out the National Park Service’s site for the current Mt. Rainier weather forecast and the Washington Trails Association’s site for trip reports on recent trail conditions.

Although the Skyline trail complex offers routes with varying round-trip distances and elevation gains, it also provides spectacular mountain and meadow views from even the paved and gravelled trails near the Paradise Jackson Visitor Center and Paradise Inn. This photo was taken near Myrtle Falls at the junction of the Skyline Trail’s paved section with the unpaved Golden Gate Trail.
Skyline Trail, August 08, 2019.

Opposite Mt. Rainier, the Tatoosh Range rears its many peaks along the southern horizon from most vantages throughout the Skyline trail complex. Golden Gate Trail, August 08, 2019.

Witness the birth of a river from the Skyline, Glacier Vista, and Pebble Creek trails as this massive waterfall — barely visible in the foregoing photo — courses off the Nisqually Glacier to form the Nisqually River. Glacier Vista Trail, August 06, 2019.

An unassuming wet spot at 7,200 feet/2,195 meters in elevation, Pebble Creek is the highest point one can easily day hike from Paradise without traction gear and skill in traversing alpine terrain. Camp Muir, which serves as a base camp for many climbers summitting Mt. Rainier, lies over 2.00 miles/3.00 km and almost 3,000 feet/914 meters up the Muir Snowfield, which commences just beyond Pebble Creek. (For a sense of scale, note the climbers in this photo dotting the snowfield above Pebble Creek.) Pebble Creek Trail, August 06, 2019.

The 0.75-mile/1.20-km Paradise Glacier side trail leads to a secluded moraine valley carved by the glacier of the same name. Paradise Glacier has retreated beyond sight of the end of the maintained trail, which nevertheless offers opportunity to observe the desolate, otherworldly environment at the top of the world, as well as the nascent Paradise River coursing from its birthplace just above. Paradise Glacier Trail, August 08, 2019.

The Skyline Trail’s eastern highlands skirt the headwall of Stevens Canyon, offering a glimpse of the full view to be had from the connecting Lakes Trail that continues to the southern half of Paradise.
Skyline Trail, August 06, 2019.

In winter, many of the trails around Paradise are suitable for snowshoeing. Do be sure to check the mountain weather forecast and road conditions beforehand, equip yourself with appropriate winter gear, follow all Park regulations, and avoid avalanche-prone slopes (even small ones — it doesn’t take much snow to bury a human!). Golden Gate Trail, February 06, 2022.