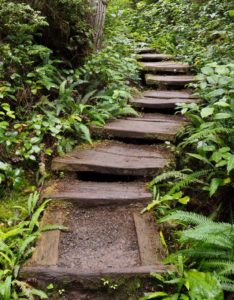 The Ozette Triangle is noted for its boardwalks that loft the overland trails above the boggy rainforest floor.
Ozette Triangle, August 04, 2018.

The Ozette Triangle offers some of the most unique features of any trail in the Pacific Northwest:  lake-to-beach boardwalks, the westernmost point in the contiguous United States, and Native American petroglyphs.  As its name implies, it is a triangular “loop” comprised of three nearly equidistant trails: the Cape Alava Trail and the Sand Point Trail, which fork seaward from a single trailhead on Lake Ozette and are joined at their opposite ends by the ocean beach that forms an easily hiked “trail” between them.  Cape Alava has the distinction of being the westernmost point in the contiguous United States, which is extended at low tide when Tskawahyah Island is briefly reunited with the mainland.  Adding to their seaside charm, the Cape Alava and Sand Point trails consist primarily of boardwalks that carry them just above the boggy soil of the coastal rainforest, rendering them nearly flat, passable in any weather (although slick when wet), and kid friendly.  Aside from the area around the aptly named Sand Point, most of the coastal trail traverses the course gravel that is typical of northern Washington beaches, which creates a “two steps forward, one step backward” drag on the otherwise flat, shoreline terrain.

Along the coastal trail, keep an eye out for 300- to 500-year-old petroglyphs carved into seaside boulders by the Makah, whose reservation lies just north of the Ozette Triangle and whose ancestral lands encompass much of the northwestern Olympic Peninsula.  The petroglyphs were created by the Ozette band of the Makah, who lived in a large village on Lake Ozette until their forced removal by European settlers.  (“Ozette” was the name of the village; the Makah call the lake “Kahouk.”)  Because the carvings include fertility symbols and are thought to have marked marriage rites, possibly in cultural collaboration with the neighboring but unrelated Quileute, the headland where they are located is known as “Wedding Rocks.”  The practice was restricted to the Ozette band and died out after their relocation to the reservation, along with all memory of its purpose.

The Ozette Triangle is a popular hiking destination during the summer months, especially for beach campers, but provides much more solitude on week days and during the off season.  However, bears, deer, sea lions, and other wildlife are common sightings and are very accustomed to humans — be aware of your surroundings and maintain a safe distance for both yourself and any fellow creatures you encounter.  (Information about wildlife safety can be found on this site’s “Resources” page under “Safety and Preparation.”)  Also, before venturing down the shoreline, be sure to check tide charts to avoid being stranded by unexpected high water, and, while hiking, note the locations of circular red and black signs posted along the edge of the beach that mark the Cape Alava and Sand Point trails and other paths away from the water.  Finally, if you are lucky enough to encounter petroglyphs, treat them respectfully as a legacy of the First Peoples whose ancestral lands are now enjoyed by all. The trail commences where a bridge spans the Ozette River just as it spills out of Lake Ozette.
Ozette Triangle, August 05, 2018. Approximately 0.20 miles/0.30 km from the trailhead in deep forest, the trail branches left to Sand Point and right to Cape Alava. Ozette Triangle, May 29, 2019. In contrast with the deep woodland shade of the Cape Alava Trail, much of the Sand Point Trail is open to the sky as a result of forest fire. Sand Point Trail, Ozette Triangle, August 05, 2018. 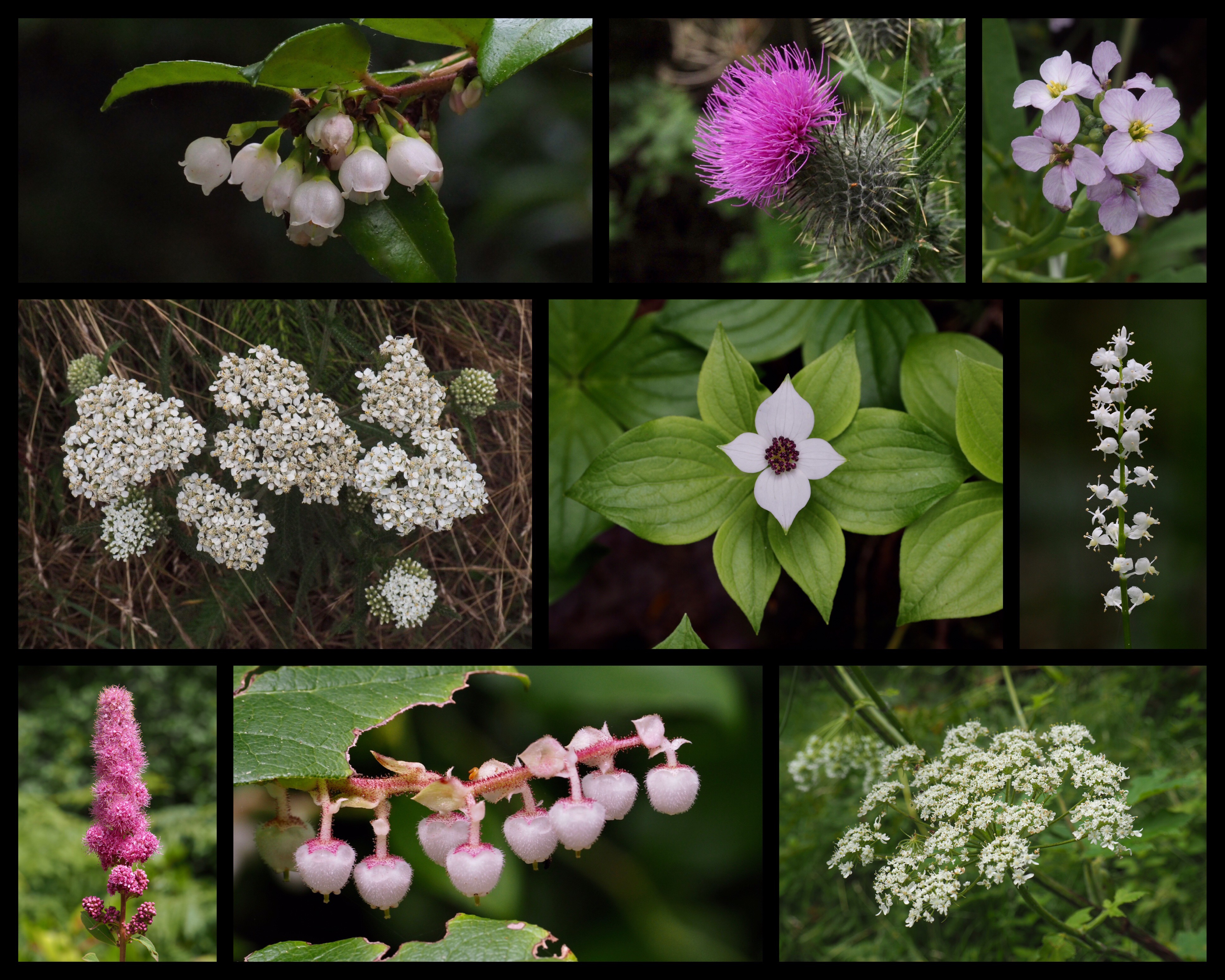 At approximately 2.25 miles/3.60 km from the trailhead, the woodland suddenly opens about the Cape Alava Trail at Ahlstrom’s Prairie, a boggy meadow named for Lars Ahlstrom, a settler who built a farmstead here in the early 1900s. Until recently, the meadow has been kept clear of encroaching woodland by fires kindled naturally and by human intervention, first by Native Americans and, later, by settlers. Cape Alava Trail, Ozette Triangle, August 05, 2018. 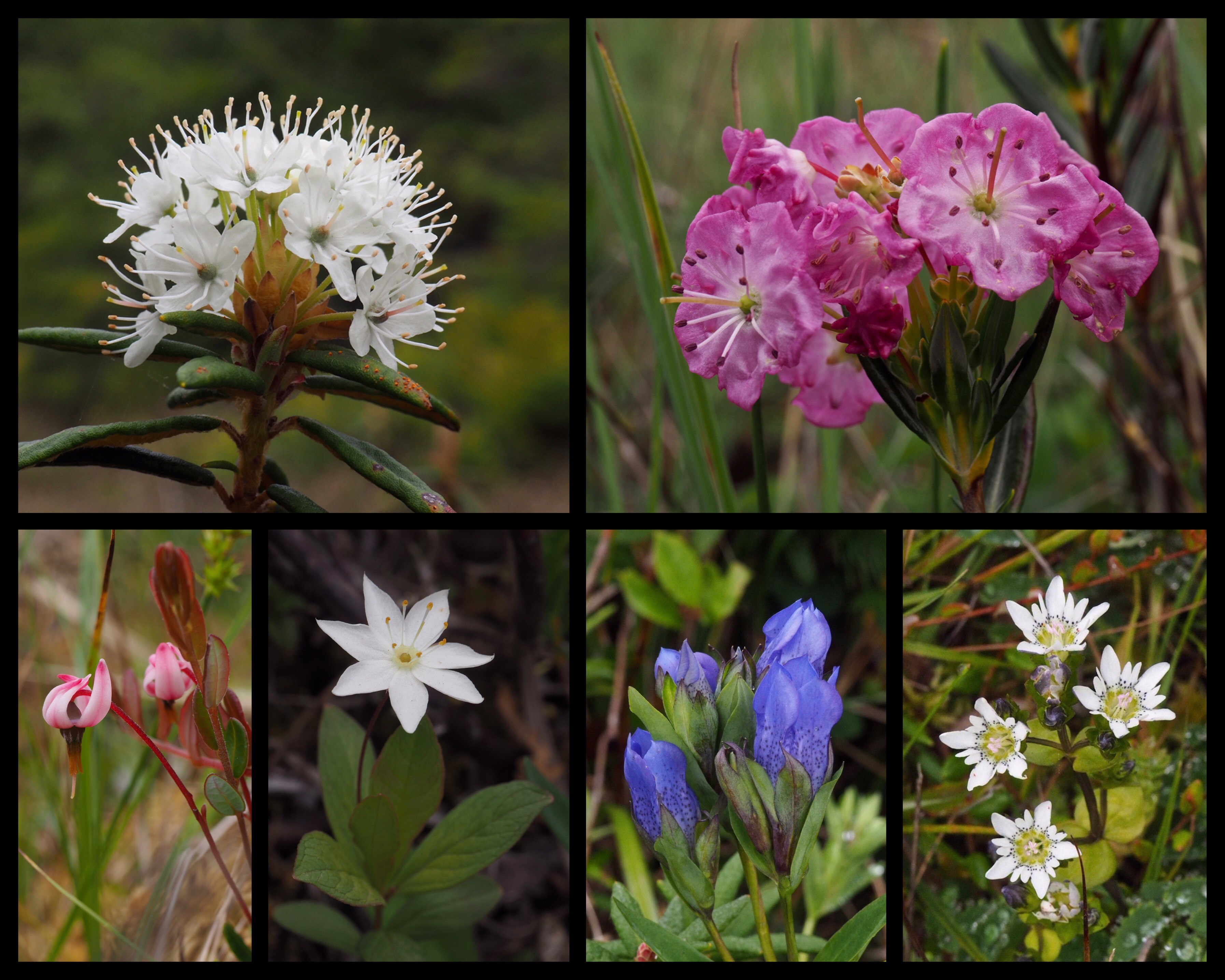 In spring, Labrador tea (Rhododendron gorienlandicum) (upper left) and western swamp laurel (Kalmia microphylla) (upper right) are the highlights of Ahlstrom’s Prairie. Indigenous people across North America have used the leaves of Labrador tea to make a beverage similar to that derived from the tea plant (Camilia sinensis), to which it is distantly related. Look for other minute blooms throughout the bog, including, lower left to right, small cranberries (Vaccinium oxycoccos) northern starflowers (Lysimachia europaea a.k.a. Trientalis europaea), king’s scepter gentians (Gentiana sceptrum), and swamp gentians (G. douglasiana).
Cape Alava Trail, Ozette Triangle, August 04, 2018 and May 29, 2019. 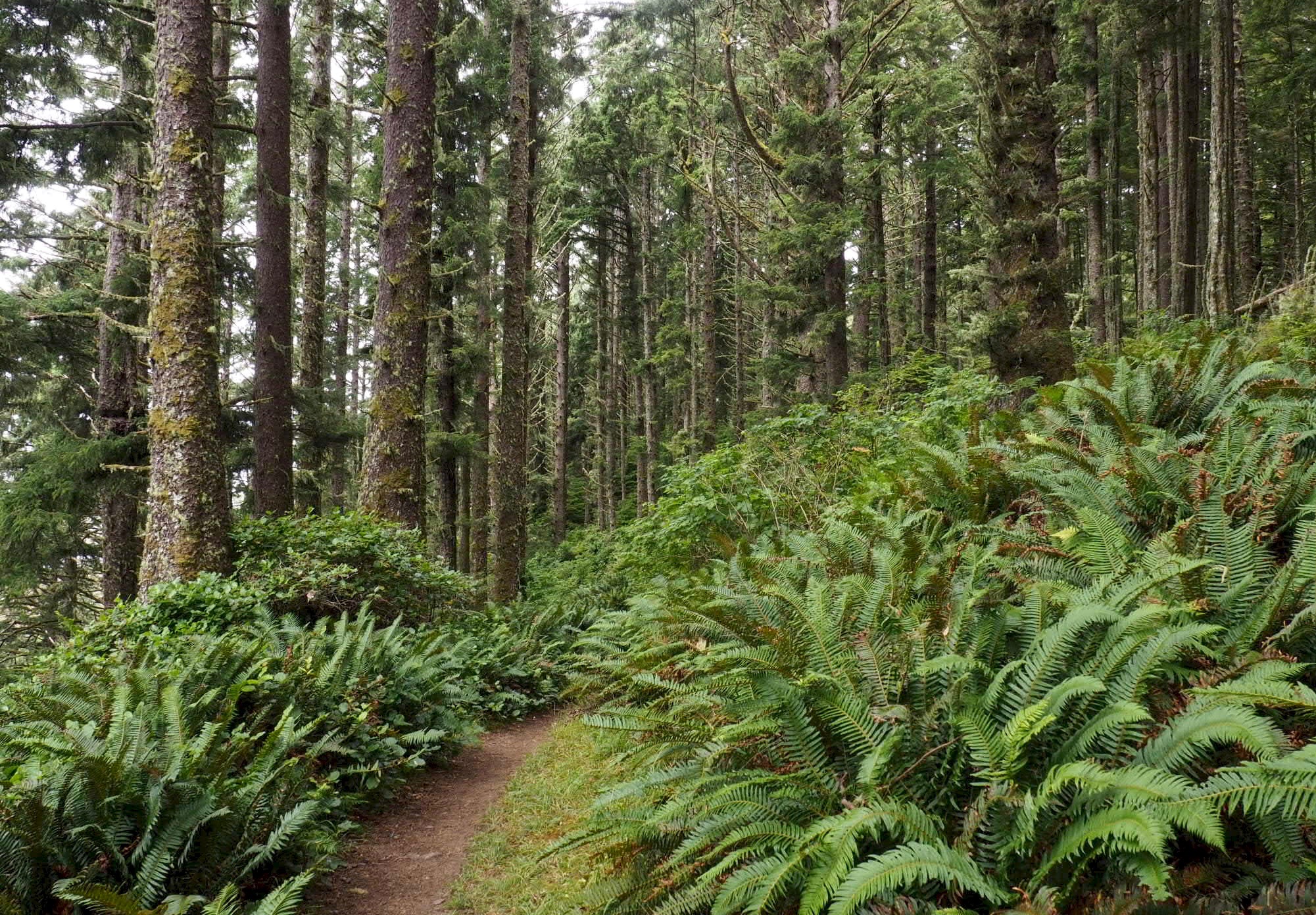 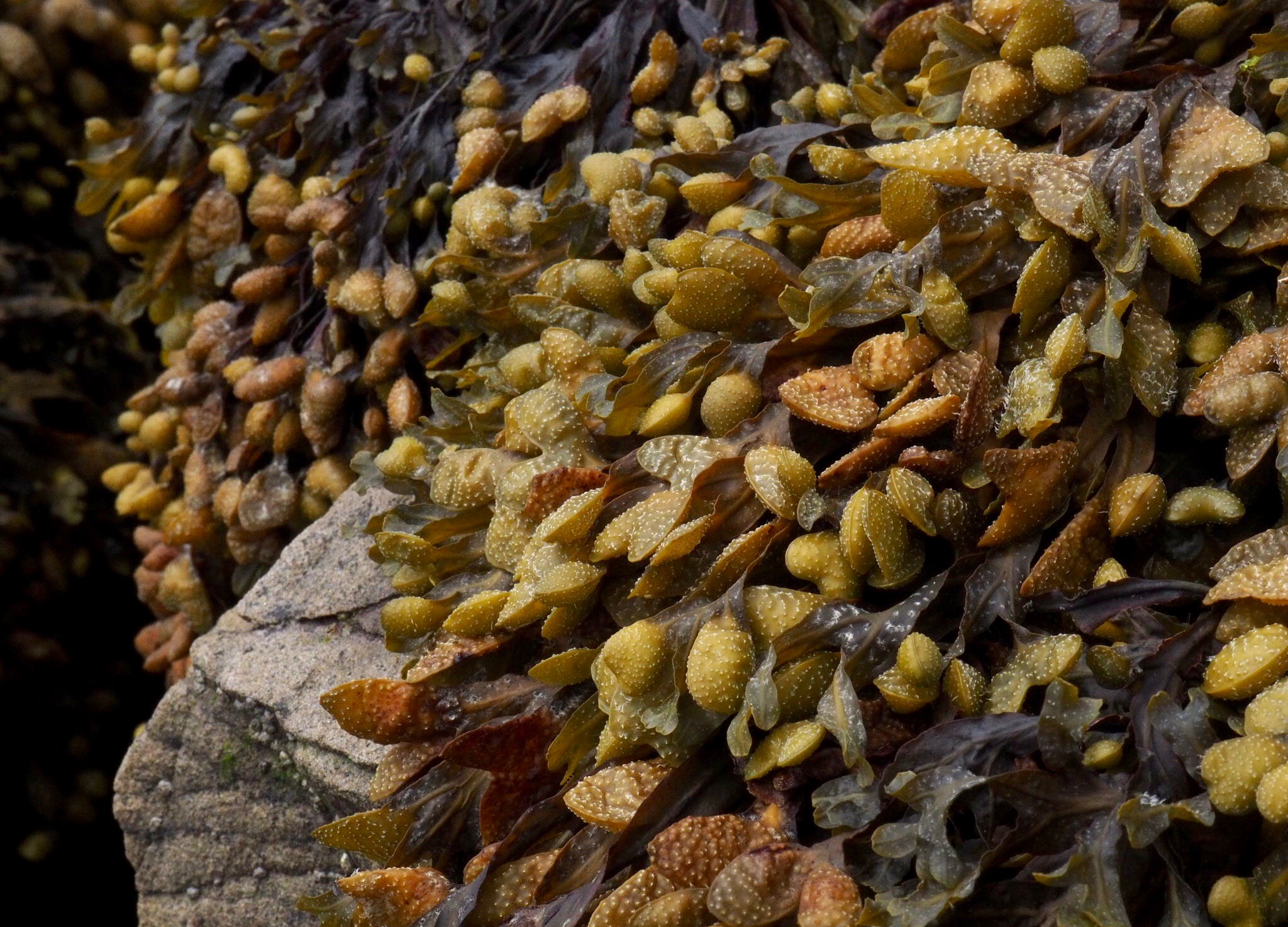 Various similar species of seaweed called rockweed (Fucus sp.) form a shaggy — and very slippery — carpet on the rocks in the coast’s intertidal zone. The rockweed’s distinctive bladders on the tips of its blades give it buoyancy when submerged by the tide. Coastal Trail, Ozette Triangle, August 04, 2018. Tskawahyah Island sits just around Cape Alava to the right of where the trail joins the beach. At low tide, when the island is briefly united with the mainland, it becomes the most westernmost point in the contiguous United States. However, resist the urge to explore the island — it is within the Ozette Indian Reservation that lies just north of Cape Alava and is not public land. Coastal Trail, Ozette Triangle, May 29, 2019. 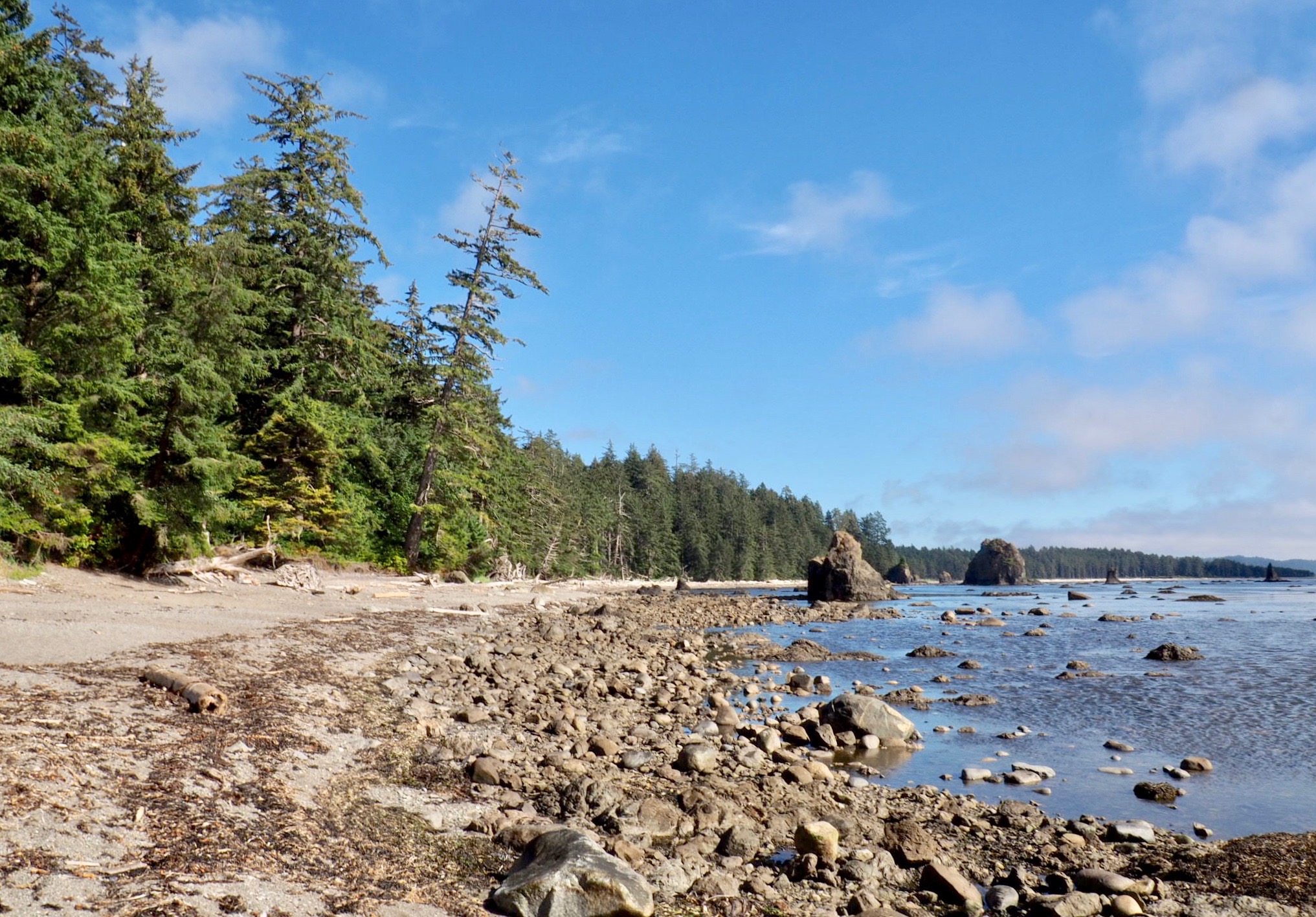 The beach’s rugged rocks and gravel render progress along the shoreline section of the Ozette Triangle slower and more laborious than one might expect for such otherwise flat terrain.
Coastal Trail, Ozette Triangle, August 04, 2018. Along coastal trails in Olympic National Park, circular red (or orange) and black signs mark trails away from the beach, including the Capa Alava Trail and Sand Point Trail. The signs also mark routes around headlands, rocky points like the one in the lower left photo that jut into the surf and are otherwise impassable at high tide. Do note that trails around headlands may be no more than boot paths that require scrambling up rugged inclines with the aid of installed ropes, as in the photo on the right. Coastal Trail, Ozette Triangle, April 04, 2018. On boulders scattered about a headland known as Wedding Rocks, look for petroglyphs carved three to five hundred years ago by the Ozette band of the Makah, who lived in a community on the shore of Lake Ozette. The carvings in these photos are thought to depict an orca (upper left), a fisher (lower left), a bride and groom (upper right), and a human face (lower right).
Coastal Trail, Ozette Triangle, August 05, 2018. 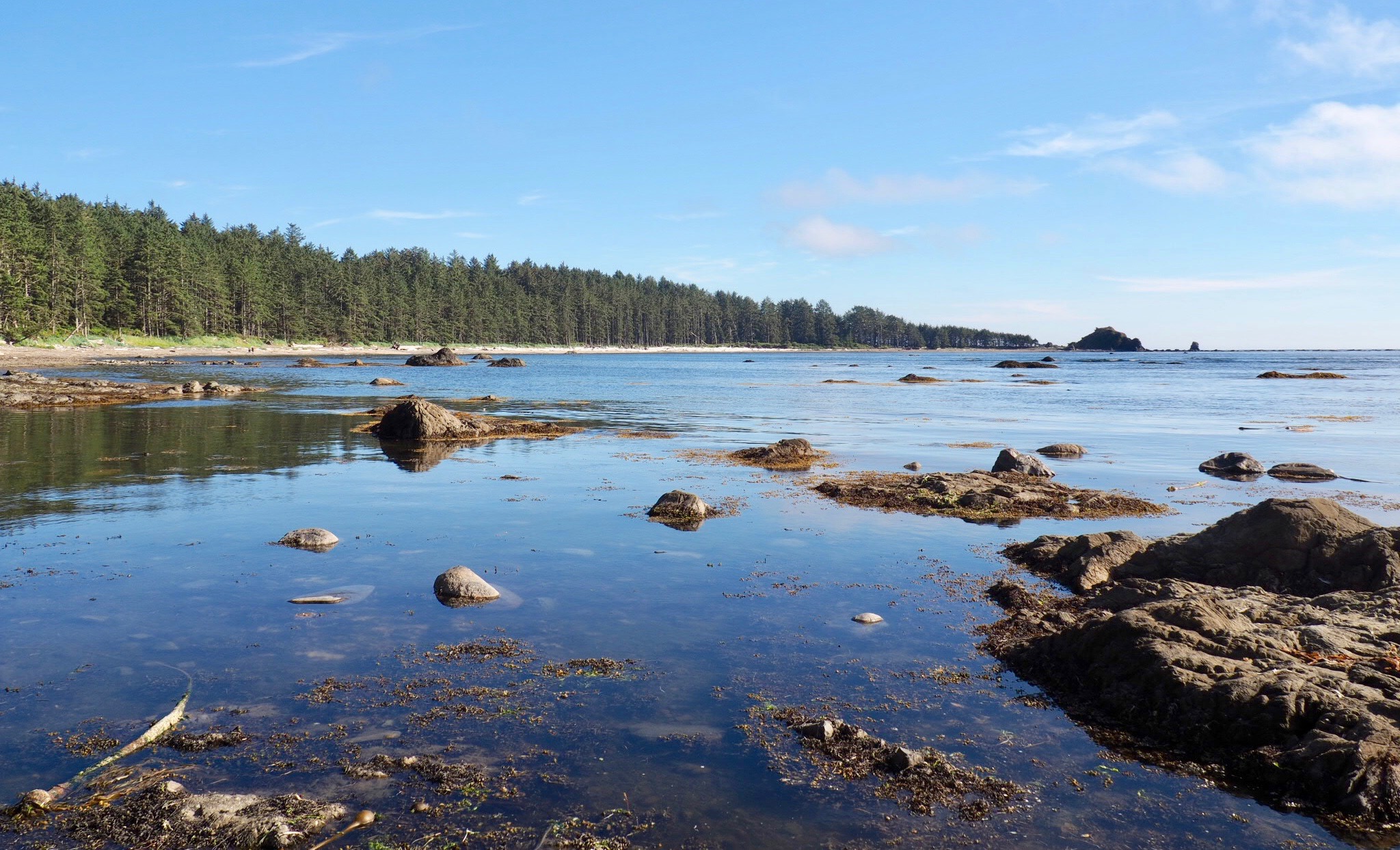 Sand Point is a major headland curving into the sea approximately 3.00 miles/4.80 km south of Cape Alava and culminating in the rocky knoll on the horizon at the far right of this photo. As its name implies, the course gravel typical of northern Washington beaches reduces to fine sand in the area around Sand Point. Do note that the Sand Point Trail entrance is about 0.20 miles/0.32 km north of Sand Point — look for a circular, red and black sign to identify the trail.
Coastal Trail, Ozette Triangle, August 04, 2018. 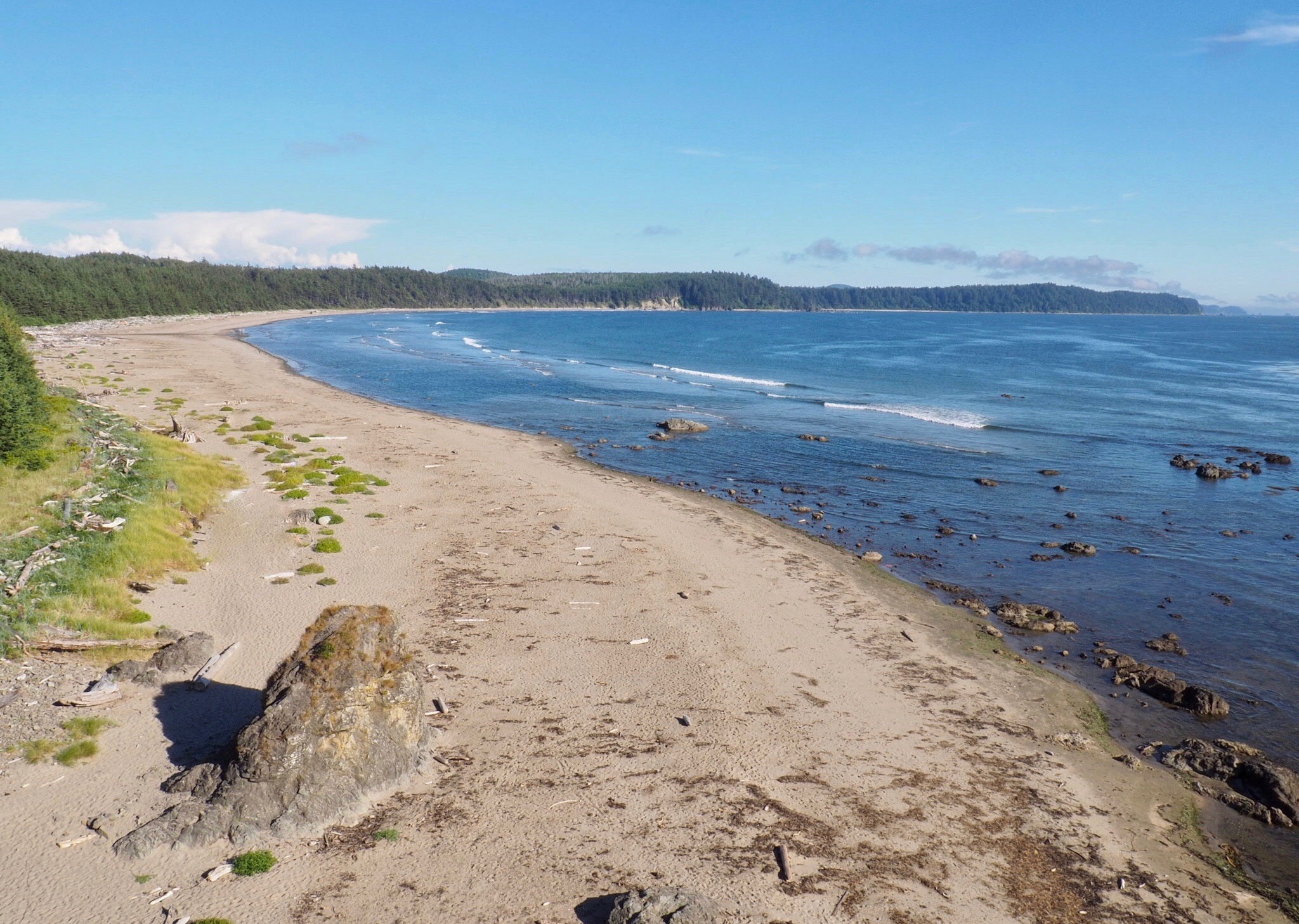