From Mount Dickerman’s summit in the heart of the North Cascades, scores of rugged mountain peaks stretch in every direction as far as the eye can see.  The trail climbs steeply through heavy, mostly coniferous forest with tantalizing glimpses of the surrounding peaks until it clears the treeline, where sweeping alpine meadows yield increasingly expansive views until the mountain’s sway-backed summit and its 360-degree panorama are attained.  Snow can linger on the mountaintop and meadows until at least July, when it briefly gives way to massive drifts of summer wildflowers.  Be sure to check the “Additional Trail Info” links above for information on current conditions.  Although Mount Dickerman is nestled in the southeastern crook of the Mountain Loop Highway, no trace of the road is seen or heard beyond the trailhead.  However, the trail is a popular hiking destination; on weekends, be prepared to enjoy the impressive views with at least a few other hikers.  And, because the summit’s northern edge is bounded by sheer cliffs that plunge precipitously into the valley beyond, caution must be exercised to prevent potentially disastrous falls, especially with children. The trail begins its ascent in the shadow of towering forest and looming stone outcrops, samples of the craggy landscape to come. Mount Dickerman Trail, September 14, 2014. 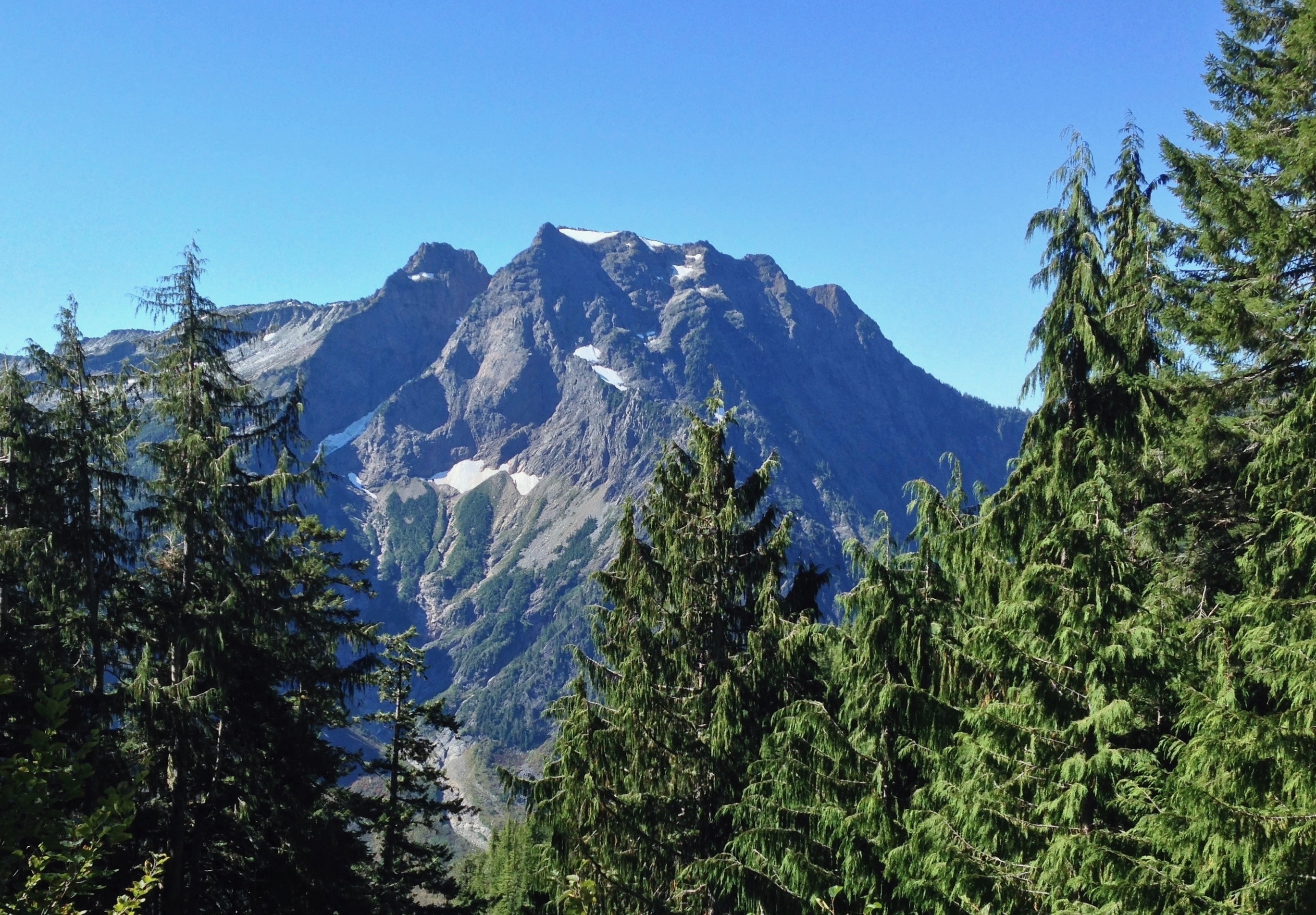 As the trail climbs, the forest parts to reveal glimpses of the surrounding peaks. Here, Big Four Mountain peers above the treetops. Big Four Mountain is not named for the clearly more than four knuckles along its summit, but rather for a curious patch of snow on its eastern flank (not visible from Mount Dickerman) that sometimes appears in the shape of the numeral “4”.
Mount Dickerman Trail, September 14, 2014. More peaks reveal themselves as the trail gains elevation. To the south rises Del Campo Peak, an outlier in a dense cluster of peaks known in climbing terms as the “Monte Cristo Group” or “Monte Cristo Area,” or, colloquially, the “Monte Cristos” (and not to be confused with the Monte Cristo Range in southwest Washington). The Monte Cristos are named for the short-lived mining town built among them in the 1890s, which was, in turn, named when a prospector likened a vein of gold ore to the wealth of the fabled Count of Monte Cristo — incorrectly, as it turned out.
Mount Dickerman Trail, July 11, 2009. 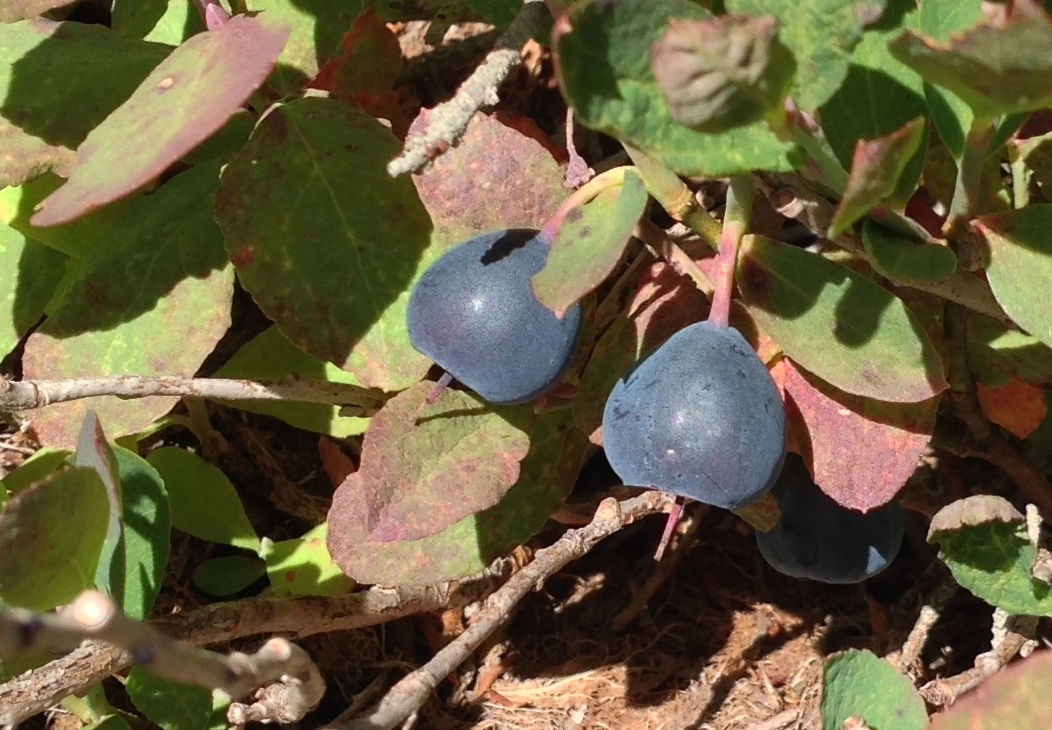 Though no doubt focused on the surrounding skyline, don’t forget to look down occasionally. During the fleeting alpine summer, luscious blueberries (here, Cascade blueberries, Vaccinium deliciosum) lie hidden in several barrens near the treeline, where their bushes form thin mats of groundcover where little else grows. Mount Dickerman Trail, September 14, 2014. 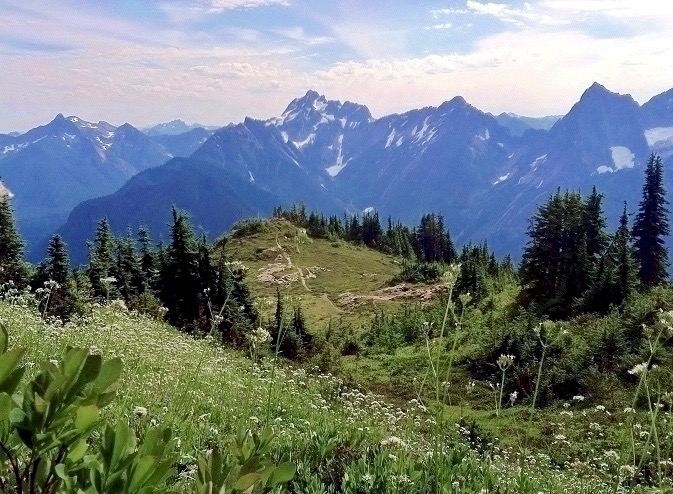 Near the mountain’s summit, meadows and views open. Here, from left to right, Silver Tip Peak, Spire Mountain, Lewis Peak (the small point on the left side of the much larger Del Campo Peak in the center), Del Campo Peak, Morning Star Peak, and Sperry Peak line the horizon.
Mount Dickerman Trail, September 08, 2012. In the mountaintop meadows, snow persists into summer, but is quickly replaced by sweetly scented lupines (Lupinus sp.) and other wildflowers during the brief alpine growing season, as demonstrated by these photos taken from nearly the same vantage in July and September. The Monte Cristos form the horizon in both photos. Mount Dickerman Trail, July 11, 2009 and September 08, 2012.

Just north of Mount Dickerman on the other side of Perry Creek’s deep valley is the roughly Z-shaped, deeply fissured Stillaguamish Peak, with Pemmican Peak forming its western (here, left) arm and Mount Forgotten its eastern (right) arm. Beyond, a parade of peaks rides the horizon, including Three Fingers, Whitehorse Mountain, and Jumbo Mountain on the left, snowy Mt. Baker and Mount Shuksan in the distant center, and White Chuck Mountain and Mount Pugh framing Mount Forgotten on the right. Mount Dickerman Trail, September 08, 2012.

Mount Dickerman’s rugged eastern view encompasses White Chuck Mountain, Mount Forgotten, and Mount Pugh on the left of this photo, Glacier Peak and Twin Peaks in the center (with Twin Peaks centered just below Glacier Peak and appearing as a single peak because of its east-west orientation), the tri-tipped Bedal Peak and Sloan Peak just right of the center, and Cadet Peak and Gemini Peaks on the far right. Mount Dickerman’s eastern hump curves upward in the right foreground.
Mount Dickerman Trail, September 15, 2013. 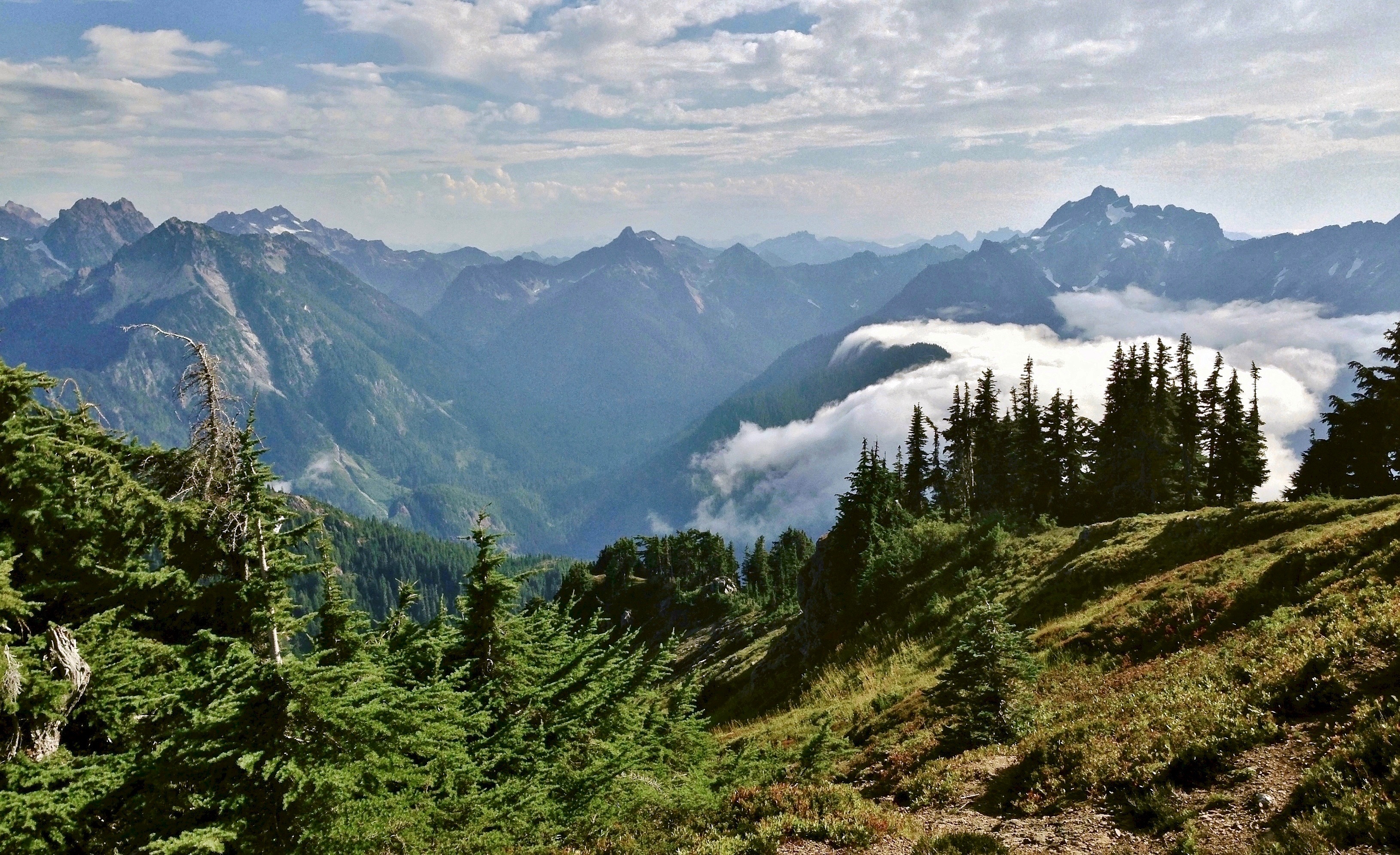