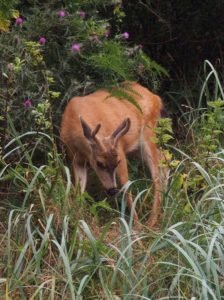 Slowly, a young blacktail buck works his way along the woodland’s coastal verge, nibbling the tender shoots that spring into light where weathered spruce gives way to ribbons of dunegrass. Still lithe in body and bearing, he is likely in his second year, as suggested by his unbranched antlers. He leads a harsh and likely short life — predators abound here, too, and unforgiving seas lash the retreating coast with frequent storms. His lot matters not to him, for it is the only life he knows. In his time, he lives unbidden by any and beholden to none but the sage old instincts honed through countless generations of his kind. Like many creatures in national parks, he is accustomed to humans, yet not tame. Near, and yet apart. Here, he is an equal, much like his and human ancestors were when all dwelt amid the teeming wilds, before some humans sought to subdue the world and all therein. He pays me no heed, but would surely bolt if I drew nearer. In these few moments, we are merely fellow beings on briefly parallel paths. Then he slips into the forest fringe and is gone. Be well, O wild one!