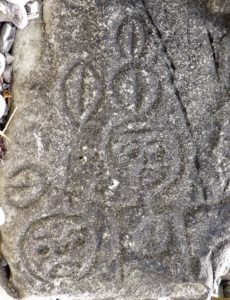 Petroglyphs carved into seaside stones by the Ozette band of the Makah witness their former presence on ancestral lands now known for the lake and hiking trail that bear their name.
Coastal Trail, Ozette Triangle,
August 05, 2018.

Place names tell stories. They endure and evolve over generations, often holding clues to a forgotten past. Hiking around Washington (the state, not the “other” Washington), one encounters many place names that are clearly of indigenous origin, but otherwise have little meaning to casual passersby or even to lifelong local residents. Names such as Willapa (the valley where I grew up), Entiat, Methow, and Palouse become so commonplace, we seldom consider the derivation of these words that are clearly not English. Although we may suspect them to be of indigenous origin, most are not merely remnant Native American words or place names — they are the names of people, the First Peoples who once inhabited the places that bear their names. However, these First Peoples’ existence — both historic and current — is often obscured by their absence from those very places.

The arrival of non-indigenous settlers dramatically — catastrophically — altered our First Peoples’ very existence. Within the span of but one or two lifetimes, First Peoples were swept both from land and from memory to make room for newcomers, gone from the homelands they had inhabited for countless generations. In a few unfortunate cases, they no longer even exist, like the Willapa of my childhood home. By “treaties” with non-indigenous settlers from other lands, these First Peoples were systematically and forcibly removed from their ancestral lands and consolidated — often arbitrarily — into the system of tribes and reservations that exists today. Furthermore, those new organizations were often given names unrelated to many — or any — of the First Peoples who comprised them, rendering many First Peoples virtually unknown beyond the borders of reservations and pages of history books, conveniently disconnected from the lands they once inhabited. For example, not one of the twelve confederated tribes of Washington’s Colville Reservation — the Colville, Chelan, Okanogan, Lakes, San Poil, Nespelem, Entiat, Methow, Moses-Columbia, Wenatchi, Palus, and Chief Joseph Band of the Nez Perce — was initially named “Colville,” a name carelessly applied to the reservation and First Peoples who live upon it by non-indigenous settlers in reference to the reservation’s proximity to Fort Colville, which was in turn named for a slave-owning governor of the Hudson’s Bay Company. Yet, the actual names of several of those tribes are instead more readily recognized as Washington cities, geographic features, and popular vacation destinations.

In a cruel twist of irony, our First Peoples’ names remain behind them, sprinkled across the landscape in maps and road signs, disembodied echoes of a not-so-distant, not-so-comfortable past. Upon realizing the derivation of those place names, it becomes apparent that, long before Europeans and others “settled” what is now called “Washington” (and much of the rest of North and South America), it was already fully populated — every river valley, every coastline, every swath of sageland. Far from living in scattered isolation amid a tractless, empty wild, Washington’s First Peoples formed a vibrant network of communities, alliances, and trade routes connected to others as far off as what are now known as Canada, California, and the Great Plains. Across a panoply of cultures and languages, our First Peoples lived, married, traded, celebrated, and sometimes warred. They were every bit as human as you and me, at home in the place we all now call “home.”

First Peoples still cope with intergenerational consequences resulting from the divestment of their ancestral lands, cultures, and social and family structures.  Many still struggle to attain the rights promised them by treaty.  Although we can never fully undo the injustices of the past, respectful acknowledgement of our First Peoples’ historic presence and continued experience can speed rectification of ongoing inequities and reversal of their very “invisibilization” by fostering awareness and dialogue. A first step is land acknowledgement, also called “territory acknowledgement” and “acknowledgement of country.” Land acknowledgment is the simple act of recognizing that the places we live today are the ancestral lands — birthplaces, thoroughfares, hunting, fishing, and gathering grounds, cultural touchstones, and sacred spaces — of our First Peoples. Well established in some other nations also founded on colonialism and imperialism, such as Canada and New Zealand, the concept of land acknowledgement is still little known in the United States, despite its historic habitation by many indigenous peoples, including Native Americans, Native Alaskans, Native Hawai’ians, and others. More than a mere throwback to a simpler, often romanticized culture, land acknowledgement recognizes, even in just a few words, the hardships and injustice imposed upon our First Peoples and the benefit inured to all subsequent arrivals as a result. It’s a simple way of saying, “Your people were here. You were here. You are here. We acknowledge your experience and our place in it and we recognize your place in the world we all share today.”

Land acknowledgements can take many forms.  Governments, educational institutions, and businesses post acknowledgements of the First Peoples on whose ancestral lands their campuses stand or on which they conduct their affairs.  Land acknowledgements are also recited before classes, sporting events, business meetings, weddings, and other gatherings.  Those of us who enjoy hiking the Pacific Northwest also have an apt opportunity to recognize the relationship between ourselves, First Peoples, and the natural spaces we all treasure. And, the digital age facilitates acknowledgement of that combined experience. Not only are we able to share our wilderness experiences almost instantaneously in photos, blogs, and other posts across social media, but information about those magnificent places is readily available at our fingertips. Adding a land acknowledgement to our social media posts can be as simple and logical as noting that the trail we hiked lay on ancestral lands of the specific First Peoples of that area. You may have noticed that a few Instagramers in the hiking community have begun to include basic land acknowledgements along with the locations of the photos they post, for example, “Ancestral lands of the Quileute.” This is why.

Proper, respectful land acknowledgement does require a little work. Before slapping the name of a local tribe on your post, make sure it’s accurate. Again, this is where technology empowers. Simply conducting an internet search using a place name and a relevant term such as “Native American” will provide a great start. Although not every website is an authority on indigenous cultures, the internet contains a surprising wealth of information on North America’s First Peoples (and especially those of Washington), including geographic ranges of tribes’ ancestral lands, identification of individual bands and their specific locales, and traditional spelling of indigenous names — often even in the alphabet used by the tribe for its first language. Once you have an idea of who the First Peoples of a specific location are, try checking that tribe’s or reservation’s website, which should be considered an authority on information about the tribe. Note that some First Peoples refer to themselves with a name other than that given them by treaty or by common, non-indigenous use. For example, the Twana of Washington’s Olympic Peninsula consider “Skokomish,” the formal treaty name by which they are commonly known, a misnomer; the Wenatchi and Yakama of central Washington spell their names differently from the cities, valleys, and rivers named for them; and the Ts’elxwéyeqw of southern British Columbia and northwestern Washington refer to themselves with the spelling of their first language, rather than the anglicized version, “Chilliwack,” even when otherwise writing in English.

Land acknowledgement is a first step toward greater inclusion of our First Peoples and their experience as Washingtonians and Americans. Use it to consider how you can learn from or even partner with First Peoples in your community. Our First Peoples still care for our land and many are at the forefront of efforts to protect and preserve it for all. Washington is truly fortunate to have so many of its First Peoples remaining as integral members of its communities, demonstrating stewardship of the land and leadership in social justice.

A final note: delving into the history of non-indigenous relations with First Peoples can make you heartsick. Learn to just “be” with that discomfort. Don’t defend. Don’t deflect. It’s not about guilt or blame, but rather acknowledging the past and working toward a better, more inclusive future.

Land acknowledgement is about respect. Respect for one another, respect for our shared experiences, and respect for the land that is home to us all.  As hikers, we already have a special appreciation of our great outdoor legacy. We are close to the land. We sense a connection with wild spaces. We understand how they sustain our physical, emotional, and even spiritual wellbeing. And, we understand the concept of sharing them with others. Land acknowledgement is an opportunity to deepen that appreciation for our land, how we’ve come to enjoy it, and how it connects us across time and culture to our broader community.